CPM Group's recently released Silver Survey 1997 shows that the silver deficit widened during 1996, as supplies at their highest level since 1980 were once again outstripped by growing demand. The deficit is projected to narrow, however, during 1997. 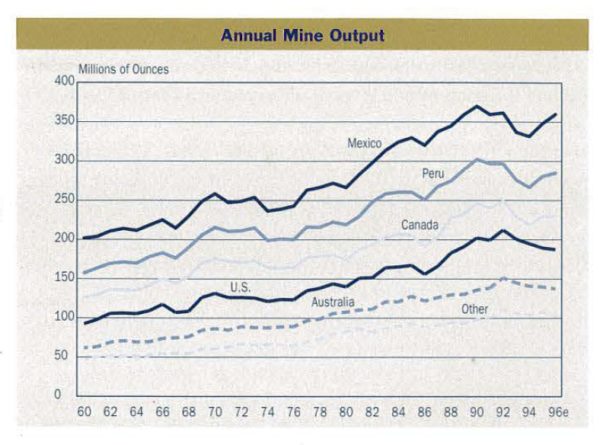 Total silver mine production grew to an estimated 359.9 million ounces during 1996, boosted not only by growing production from primary silver mines but by increased copper, gold, zinc and nickel mining. This is a 3.5% rise over the 1995 levels, an increase that is projected to augment rapidly during 1997 as new mining operations continue to come onstream. By far the largest silver producing nation is Mexico, which contributed 75 million ounces during 1996, an 11.4% increase over the previous year. Peru, the second-largest silver producing nation, accounted for 55 million ounces.

Scrap recycling plants should see a continuing steady supply of material, not from price-induce d recycling, but from growing fabrication demand resulting in higher levels of scrap. In recent years, most silver refined from scrap has come from industrial scrap- old catalysts and batteries and photographic materials. It has not come from the recycling of jewellery, silverware and old coins - as was the case when spot prices rose as high as $48 per ounce in 1980. ln fact, currently, only 1.7 million ounces of recycled silver comes from old coins, an amount that has remained fairly constant for the past three years and which last year represented only approximately 1% of all recycled silver.

Dishoarding of silver decorative objects and jewellery by private individuals in India no longer plays an important role in supply. Prior to 1990, when India's struggling economy was further beset by natural disasters, the hardship s placed upon families often led them to sell silver-bearing decorative objects. The drop in these sales represents a combination of the strong growth the economy has begun to experience and an absence of natural disasters affecting the rural economy.

Government disposals fell sharply from high levels in 1995, which had been boosted by Indian Government sales of illegal imports of silver. To meet rising demand and reduce the large quantities of silver being smuggled into Indi a, special import licences were introduced in 1994. The result was that last year saw an estimated 965,00 0 ounces smuggled, compared with 20.3 million ounces in 1993. 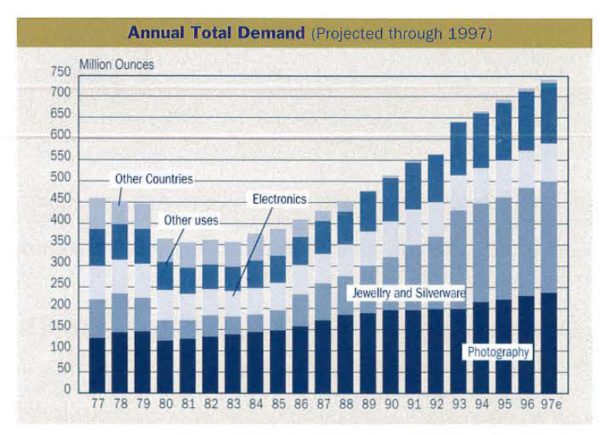 Silver demand rose in all major sectors in 1996, leading to an overall increase of 3.8%. This is ex pec ted to be followed by a more modest increase of 2.8% during 1997, w hic h assumes positive worldwide economic conditions next year.

Rates of increase varied according to the sector, with the largest growth seen in jewellery and silverware. There were divisions among geographic regions as well, where the sharpest increases came from emerging economies, led by India, Thailand and Mexico. Emerging economics now account for 32.4% of all silver fabrication demand. The largest consumer remains the United States, which used an estimated 146.7 million ounces. Demand in Japan, the second-largest consumer, rose nominally from its level of 123.2 million ounces to a record 124.3 million ounces, due to strong growth in the photographic sector. Indian demand, fuelled by a new influx of supplies, rose 13.9% after two straight years of decline. Demand for silver jewellery there actually fell somewhat, as more affluent consumers turn ed to gold jewellery instead, but silver decorative items remain the gift of choice for weddings and business occasions.

It is generally assumed that higher silver prices will dampen fabrication demand, however, in reality, the effect of higher prices depends s on the application. In many industrial applications, such as electrical components, there is no suitable substitute for silver, and its cost relative to the final cost of the unit produced is nominal. Photographic demand proves somewhat more elastic in its response to higher prices, but the effect is limited. The temptation when the silver price rises might be to cut back on the amount used per unit, but the quality and speed of film can become compromised. Jewellery and silverware, however, being discretionary purchases, tend to be affected by higher silver prices.

During 1996, investment demand in all precious metals surged at the beginning of the year, propelled by fears that the equity markets might have run out of potential. It produced to be the opposite case, however, and, upon realising that, investors fled the precious metals market with as much enthusiasm as they had entered it. They stayed away from silver for the balance of the year. Investment demand being the driving force for price direction, it is not surprising that silver prices peaked in early February and thereafter fell into a decline that lasted into the beginning of 1997 as the US and other equity markets continually climbed.

Increasingly silver became more vulnerable to short-term trading strategies put in place by banks and dealing companies, as well as short-selling by a number of smaller commodity funds dealing primarily in the futures options markets. 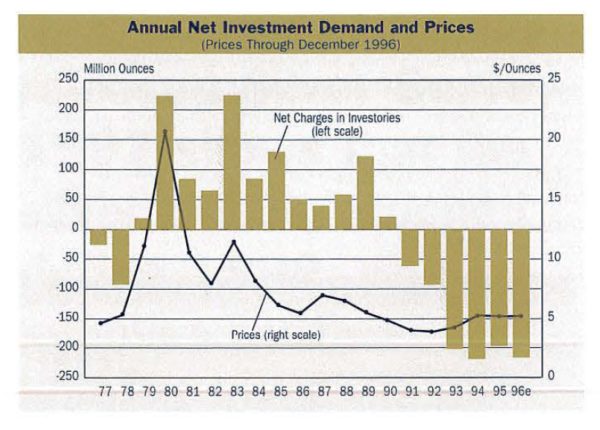 A sudden, sharp decline in equity markets would not necessarily send investors immediately scurrying for silver, as corrections have recently been seen only as buying opportunities. What is needed to turn investors sour on equities would be a perception that they had maximised their value and no longer had the potential to provide double-digit returns.

Alternatively, investors interested in silver purely as a commodity could become buyers if, on a fundamental level, underlying strong demand and tightening supplies lead them to conclude that it is undervalued. 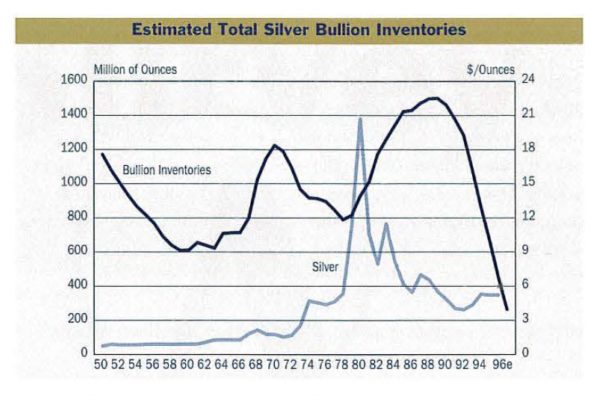 Participants in the silver market have long wondered how much silver exists worldwide in available stocks, and how price-sensitive holders of the stocks are. Watching demand outstrip supply for seven years running without the price able to sustain significant progress from its low of $3.523 on 2 February 1993 leads to a certain amount of bafflement.

The solution to the puzzle in the existence of large unreported inventories of refined silver. As long as the holders of these stocks have been willing to liquidate them at prices close to the market, the effect has been to dampen any rally that shortfalls might cause. This situation has existed in the past. For example, from 1950 through 1959, fabrication demand outstripped new supply by nearly 600 million ow1ces - but the US Treasury had a stockpile of more than 2 billion ounces, which it readily sold to users. Again, from 1971 through 1978, deficits existed and, by the period, much of the accumulated stocks had been drawn down.

After the 1979-1980 rally, the silver market realised a cumulative surplus that lasted in the 1980s until 1989, plus excess being added to current stocks throughout the world. Such large inventories) depressed prices. The resulting low prices meant that silver was cheap to use, expanding demand, but relatively expensive to produce as a primary metal, squeezing fresh supply. This combination led to the current period of deficit s. The cumulative deficit of those seven years 1,022.4 million ounces - was the largest seen yet and did lead to a price rally in 1995, from $3.52 to as high as $6.16 per ounce. Enough metal still remained to keep the price relatively low and from rallying further, but more than 1 billion ounces of inventories had been used up.

After evaluating statistics dating back as far as 1950, prior to which reliability is extremely questionable, CPM Group has calculated a) high, medium and low range for private-sector inventories. The low estimate would be around 711 .8 million ounces, the medium estimate 821.8 million and the high 946. 8 million.

What is clear concerning any of these estimates is that there has been a massive drawdown of inventories since 1990, whatever the level at which they stood at that point, and that stocks are lower today, by a wide margin, than they have been since at least the beginning of the I 950s.