The Demand for Physical Gold the Impact of Asia

The focus of the physical gold market has turned from the North Atlantic to the Pacific. Not only is the Asian region (including the Far East Asian countries, China and the Indian sub-continent) the largest consumer of gold today, but it is also the fastest growing in terms of gold demand. The pace of economic development and the increased wealth in many of these countries has fundamentally important implications for gold demand over the next decade. 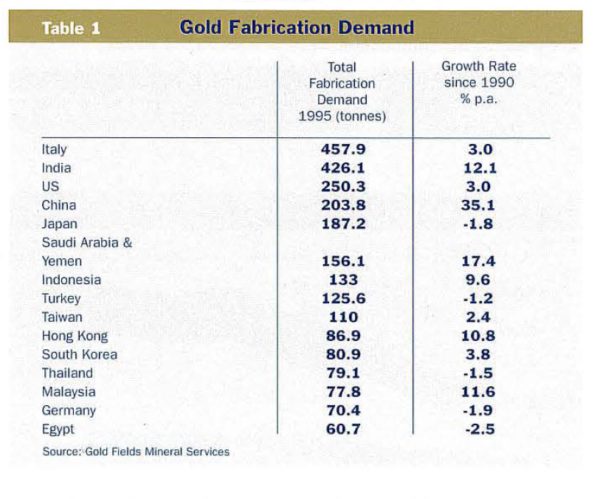 Why Is Asia So Important To The Gold Market?

Showing the top 15 countries in terms of gold fabrication demand (Table I) clearly demonstrates why the Asian market is so important to the present and fuh1re of the gold industry. Nine of the top 15 gold consumers for fabrication fall within the Asian region (Asia includes the Indian subcontinent).

It is worth highlighting that the Asian region is both the largest consumer and has the fastest growth in gold demand. In the base metal markets, greater focus is now being given to the Asian region because of its high growth rates over the past decade, relative to the developed world. However, this region still represents less than 30% of the total base metal demand. In contrast, Asia (excluding Japan) accounts for 40% of total gold fabrication demand and, including Japan, this share increases to 46%, up from 34% iJ1 1986.

Asia' s attraction to gold has been driven by two main factor s: traditions, which have ensured gold plays a major role in peoples' lives, and the lack of alternative forms of investment. Therefore, increase s in the region' s wealth will both underpin further growth in demand for gold but also raise questions over its sustainability in the face of increasing investment options. 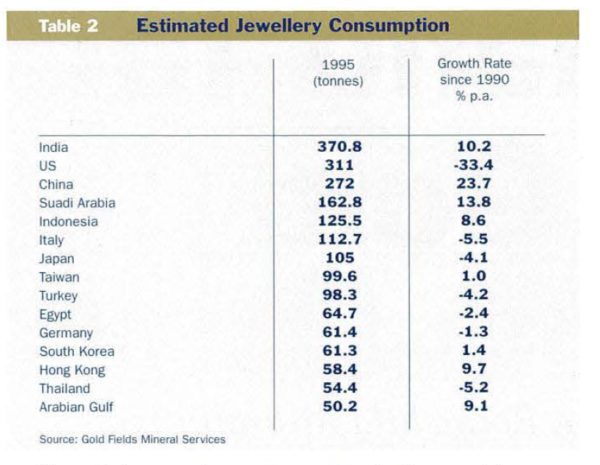 Jewellery Demand In Asia: The Importance Of India

As Asian countries have developed and the population 's wealth has increased, there has been a greater desire and ability to wear jewellery.

As Table 2 shows, India is the largest consumer of gold jewellery. It is a wedding and festival demand that underpins this position. There are an estimated 10 million wedding ceremonies each year, with an average of' 30 grams of gold bought for each wedding. Much of' the growth in demand for gold in India can be traced to the country's rapid population growth over the past decade. Recent evidence suggests, however, that while the total volumes of gold required are increasing, the quantities bought for each occasion arc dwindling.

India's huge consumption of jewellery comes despite having one of the lowest economic growth rates per head for the five years up to 1995. However, the pace of Indian economic growth has picked up since 1994, and the potential for continued development over the next decade is enormous, given its population and widening ties with the developed world. As the population has grown, so has the volume of gold consumed. Another major contributor to the growth in Indian gold demand has been the liberalisation of India's physical gold market. The removal of restrictions on the issuing of licences to goldsmiths has resulted in a flood of new producers onto the market, contributing to the 82% increase in gold demand since 1991.

Accordingly, the combination of higher per capita wealth, liberalisation of controls, and population growth should lead to India continuing to be the leading consumer of gold jewellery into the next decade.

In addition to the traditional reasons for buying gold jewellery, gold remains a major investment vehicle for much of the developing world, in contrast to the developed world, where in recent years such events as the Gulf War, the bond market crash of 1994 and the US dollar crisis of 1995 have failed to excite the gold price.

For countries where economic and political instability remains major concerns, gold is still seen as the best safe haven, particularly for people in rural areas, where gold is still considered a form of security. Hoarding of gold jewellery, coins and bars have been common throughout Asia. Evidence of gold's popularity in response to specific events in the Far East can be seen in the significant increase in China's demand for gold after the Tiananmen Square incident in 1989 and Taiwan's record month of gold imports in March last year, coinciding with the threat of Chinese missile attacks.

Japan and India are clearly the largest consumers of gold bars. The trend in many of the Far East Asian countries has been for a general decline in demand. However, the Indian subcontinent's demand for gold bars continues to grow, along with its growth in jewellery. 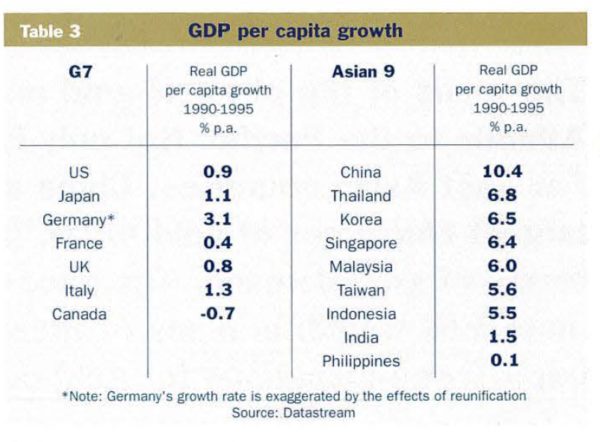 Some warning signs lie ahead, however. Improved living g standards in Asia may also eventually serve to limit its potential for gold investment demand. The introduction of more sophisticated financial markets is inevitable as these economies develop, which will open up a whole new world of investment options to the average person. As bond and equity markets develop, it is reasonable to expect that gold will lose some of its role as a savings vehicle. It may take some time for the general population to become educated and for the average person to trust these new investment vehicles, but the weakness/ stability of gold over recent years will make it difficult for it to compete with potential returns offered by these new markets.

The Asian central banks have historically given a low priority to monetary gold in their reserves. Some analysts have suggested that, as these Asian economics develop, there may be a sudden increase in the demand for gold as a reserve asset. While it is true. that most Asian countries hold very Little gold in central bank reserves, it is unlikely that they will want to boost the proportion of foreign reserves held in gold assets to the high levels of the. US (two-thirds of total reserves) or European central banks (average 37%).

The rise in economic growth in the Asian region has coincided with the region 's central banks adopting more modern business practices. These central banks are more likely to follow the reserves management practices of their Pacific neighbours, such as the Reserve Bank of Australia, rather than their European counterparts.

The RBA has maintained for some time that it should be possible to operate the international payments system on much lower levels of reserves - particularly with a regime of floating exchange rates - and certainly a much lower proportion of gold in total reserves.

What Is The Potential For Asian Demand?

Demand for gold from the Asian region has increased in line with this improvement in living standards. As per capita incomes have grown, so has the desire and ability to wear gold jewellery and to use gold as an investment vehicle.

Growth in this region has been a key driver of gold demand for the past five years and, given that this improvement in wealth and living standards still has some way to run, it will continue to drive gold demand for both fabrication and, to a lesser extent, investment into the next decade.

Before joining Rothschild, he spent 16 years in the Sugar Division of CSR Limited. His principal responsibilities related to the marketing and financing of Australian raw sugar production and policy matters relating to the international sugar trader and the regulation of raw sugar production and the Australian domestic sugar market. He has maintained this interest through various activities in the Australian market since joining Rothschild