Responsibly undertaken gold mining and refining can play an important role in achieving sustainable development and alleviating poverty in developing countries. Indeed, disinvestment or withdrawal by responsible miners and refiners can make it more difficult to stabilise a conflict situation or to achieve post-conflict reconstruction.

This article outlines the factors that have led governments, business and civil society to work together to address the misuse of gold to fund armed conflict and the human rights abuses associated with such violence. It outlines the initiatives that the gold industry has put in place to provide confidence to investors, customers and communities.

The role of natural resources in funding conflicts has been a focus for policy makers, non-governmental organisations (NGOs) and business over the last 15 years. The role of diamonds in financing the civil wars in Liberia, Sierra Leone and Angola led to the creation of the Kimberley Process. A broad range of natural resources, including timber and oil, which represent mobile internationally tradable assets, have unfortunately been linked to unlawful armed conflict.

One of the countries of most concern is the Democratic Republic of Congo (DRC). Reports from the United Nations Group of Experts have highlighted the role of resources in partially funding rival militias as the conflict has dragged on in the volatile eastern provinces. Originally, attention focused upon tin, tantalum and tungsten (the ‘3Ts’), but recently, artisanally and small-scale mined gold (ASM) has increasingly come in to the picture.

Given these concerns, the gold industry has been working over the last few years to ensure that investors, customers and communities can have confidence that gold is not contributing to unlawful, armed conflict. This is an important commitment from the gold industry and supports the increasing recognition that gold has an important role to play in contributing to sustainable development along the entire supply chain. These industry-led initiatives also complement and help ‘operationalise’ government-led initiatives, in particular, the OECD Due-Diligence Guidance on responsible supply chains from conflict-affected areas. A key theme of the Guidance developed by the Organisation for Economic Cooperation and Development (OECD) – and the conversations that have been undertaken through the multi- stakeholder group convened by the OECD – has been the recognition that a responsible minerals trade should be supported as a means to broader social and economic development. Indeed, a blanket disinvestment or withdrawal, a so-called ‘de facto embargo’, would have a severely negative impact on the livelihoods of potentially millions of people, and therefore would likely be a destabilising influence in conflict-affected areas and so exacerbate problems of poverty and instability.

The World Gold Council’s Conflict-Free Gold Standard has been developed to support responsible gold production in conflict-affected areas. Where operators can demonstrate that they have the processes in place to operate in such locations, they should be encouraged to do so. Of course, external credibility is vital and companies that conform with the Conflict-Free Gold Standard will be required to publicly disclose their conformance and have this externally assured. In such a way, investors, customers and communities can have confidence that the gold has been produced in a way that is not contributing to the conflict and associated human rights abuses.

Work on the Conflict-Free Gold Standard started in December 2009 at the request of the Board of the World Gold Council, comprising CEOs and senior executives from member companies, the world’s largest gold producers. The Standard was published in October 2012 and the nearly three-year development programme reflects the complexity of the issue and the extensive consultation and outreach that was undertaken. The LBMA Responsible Gold Guidance was also developed over a similar timeframe and applies to gold refiners. In particular, gold refiners that wish to be accredited by the LBMA on the ‘London Good Delivery List’, regarded by many as an essential requirement in order that their gold can be traded in London and other international financial markets, need to conform with the Guidance. Both the Conflict- Free Gold Standard and the Responsible Gold Guidance help to operationalise the OECD Guidance, providing specific, actionable criteria to help companies ensure that they have the appropriate systems in place to minimise the risk that they are contributing to conflict.

“This is an important commitment from the gold industry and supports the increasing recognition that gold has an important role to play in contributing to sustainable development along the entire supply chain.” 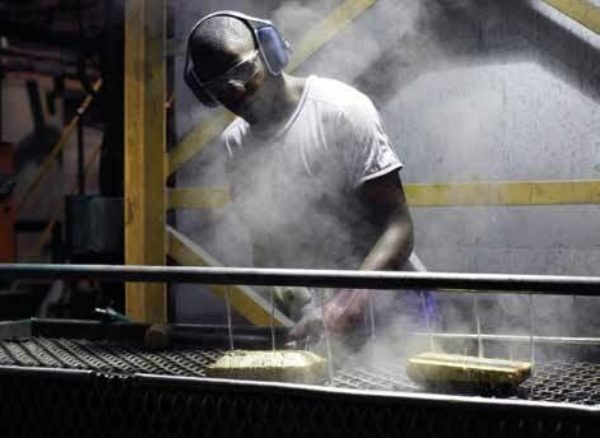 Cleaning of dore bars before labelling and transportation to refinery.

In May 2011, the OECD produced its Due Diligence Guidance for Responsible Supply Chains for Minerals from Conflict-Affected and High Risk Areas. This Guidance has global applicability and covers gold and the 3Ts. A specific Gold Supplement to the Guidance, which involved substantial industry input, was adopted in July 2012. Both the guidance and the gold supplement focus on due diligence processes designed to achieve continuous improvement and to minimise the risks of sourcing conflict- tainted minerals – rather than labelling the mineral itself as ‘contributing to conflict’.

In a simultaneous development, the United States has also regulated on this issue. In July 2010, President Obama signed the Wall Street Reform and Consumer Protection Act (Dodd- Frank) into law. While the vast majority of this legislation relates to financial reform in light of the economic crisis, section 1502 addresses ‘conflict-minerals’ originating in the DRC. To a degree, section 1502 reflects new policy instruments being used for US foreign policy. By using securities legislation, intended to protect investor interests, to regulate the minerals trade in central Africa, the law intends to cut funding to armed groups by forcing US-listed companies to identify whether the gold – or 3Ts – used in their products has fuelled conflict in the DRC or adjoining countries. Following the publication of the detailed SEC rules in August 2012, these companies are required to file this information with the SEC, putting senior executives at risk of committing fraud if they are not able to support the claims that they are making.

While well intentioned, this law risks leading to a de facto embargo from the DRC and indeed much of Africa. The DRC produces less that 1% of global annual gold supply, so there are plenty of alternative sources. However, the gold industry is a very significant supporter of jobs, foreign currency and, increasingly, government revenue in the DRC, so a de facto embargo would have severe economic and social consequences.

“However, the gold industry is a very significant supporter of jobs, foreign currency and, increasingly, government revenue in the DRC, so a de facto embargo would have severe economic and social consequences.” 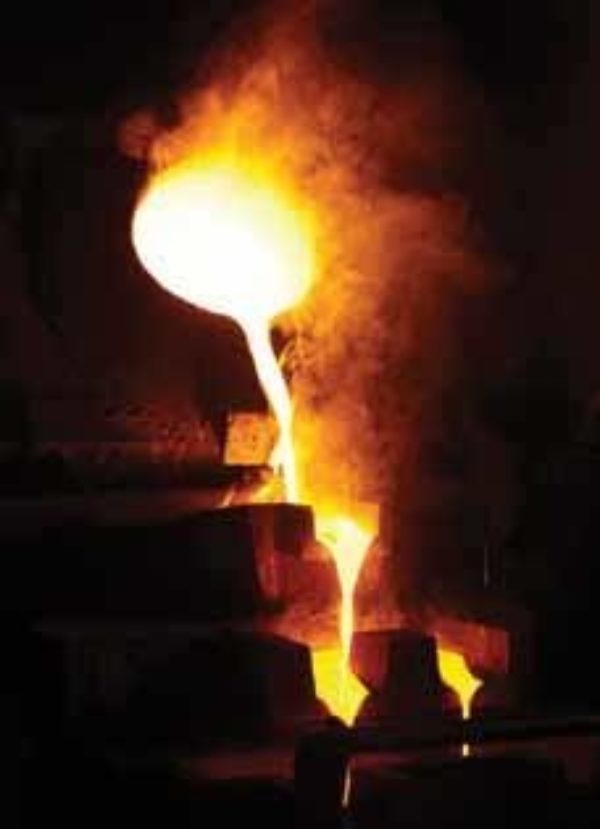 Pouring of gold in the smelthouse

Moreover, the costs for US-listed companies in adhering to section 1502 are significant. There has been some debate as to just how much this would cost, with most estimates in a range from $5billion to $10billion. The costs are so high, principally because of two reasons. Firstly, many companies may have hundreds, thousands or even tens of thousands of suppliers, which in turn may have many suppliers. Secondly, for all metals, and in particular for gold, the metal is homogeneous and is mixed from different sources. Indeed, the high percentage of gold that is recycled each year (approaching 40% of annual supply) means that it is impossible to tell from which country or countries an ounce of gold has originated.

The OECD approach is more nuanced and avoids stigmatising minerals from any specific area. Nonetheless, attention is still required to ensure that it does not lead to the stigmatisation of responsibly produced minerals. In particular, there have been increasing concerns that artisanal miners, unable to conform to the standards expected of them, may find their ability to participate in the formal markets increasingly marginalised. This is a particular concern because so many artisanal miners work illegally or in a legal grey area and lack scale, and therefore they are the most vulnerable to exploitation by armed groups. Appendix One of the OECD Gold Supplement tackles this issue by setting out a forward-looking agenda to promote the increased formalisation of ASM.

So, how has our industry responded? Is there a way forward that is both ‘right’ and makes good commercial sense? We believe so, partly because ‘doing the right thing’ is fundamental to protecting the integrity of gold. It is likely, for example, that consumers would react if we did nothing to inhibit the misuse of gold to fund illegal armed conflict. Moreover, the emergence of due diligence requirements has created the need for industry groups to work together to create robust assurance chains cost-effectively. Along with the initiatives developed by the World Gold Council and the LBMA, other sectors have also put initiatives in place, in particular, the Responsible Jewellery Council (RJC) and the Electronics Industry Citizenship Coalition/Global e-Sustainability Initiative (EICC-GeSI).

“So, how has our industry responded? Is there a way forward that is both ‘right’ and makes good commercial sense? We believe so, partly because ‘doing the right thing’ is fundamental to protecting the integrity of gold.”

Integration between the various approaches is essential if we are to deliver a credible, seamless and cost-effective framework. The LBMA has already agreed mutual recognition of audit standards with the refiner audits included in both the RJC and CFS (EICC-GeSI) approaches. The LBMA Guidance also recognises that gold produced in conformance with the Conflict-Free Gold Standard meets the criteria for refiners regarding conflict (although it is important to note that there are additional considerations regarding anti-money laundering).

The reality is that society increasingly expects transparent supply chains – albeit the gold supply chain is very different from groceries, so different approaches are required. The horrific civil war in the DRC has accounted for the loss of more than five million lives and the misuse of gold is, unfortunately, one factor in the conflict. The potential for such misuse of gold is present in other geographies too. We believe that through co-operation between the major industry actors, we are putting in place systems that will help to provide assurance that our metal is associated with progress and development rather than conflict and suffering. That is an ambitious but essential goal.

Terry is a Director at the World Gold Council and leads the Responsible Gold programme. A key pillar of this programme has been the development of the Conflict-Free Gold Standard. Prior to joining the World Gold Council, Terry was a Principal at Marakon Associates, a leading strategy consultancy, where he helped clients in a number of industries on strategic issues and new product development. Terry has a MBA from the Harvard Business School and a MEng and BA in manufacturing engineering from Cambridge University.

Ruth is the Deputy Chief Executive of the LBMA and is responsible for the strategic commercial development of the Association, including regulatory affairs, intellectual property, communications and events including the annual conference.

She acts as the LBMA’s main contact for regulatory affairs. She is responsible for the Association’s work on supply chain due diligence, especially with regard to the Responsible Gold Guidance. She also represents the Association at industry, governmental and multi-stakeholder regulatory forums. She is currently a co-facilitator of the OECD Interim Governance Group. In 2011/12 she also acted as the co-facilitator of the OECD Gold Supplement Drafting Committee.

She has an MSc in History of International Relations from the London School of Economics and a degree in English Literature from Kenyon College in Ohio.