Beyond El Dorado (the golden one)

Tim Green reviews this fascinating exhibition at the British Museum. With more than 300 pieces on display it powerfully brings to life the sophisticated metal working techniques employed by Colombian craftsmen thousands of years before Colombus discovered the Americas. 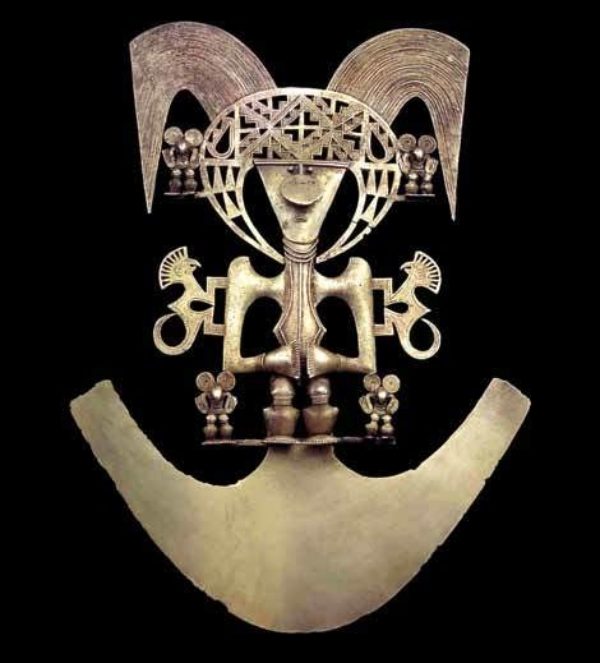 The passengers in First Class on an American Airlines flight from Bogotá to London early this autumn were treated with the greatest respect. After all, they had been created centuries ago in the hands of craftsmen skilled in the gold- working techniques of ‘lost wax’ casting and the hammering of metals, including tumbago, an alloy of gold and copper. The earliest dated from 1600 BC.

These masterworks from Colombia reveal the true origins of El Dorado, ‘the golden one’, a lost city of gold. The myth actually refers to a ritual at Lake Guatavita, near modern Bogotá, at which a newly elected leader covered in powdered gold dived into the lake and emerged as Chief of the Muisca, who lived in the highlands of Colombia.

This exhibition displays more than 300 objects from the Museo del Oro in Bogotá and the British Museum’s own pre-Colombian collection. The result is one of the finest exhibitions of historic gold artefacts that I have seen. 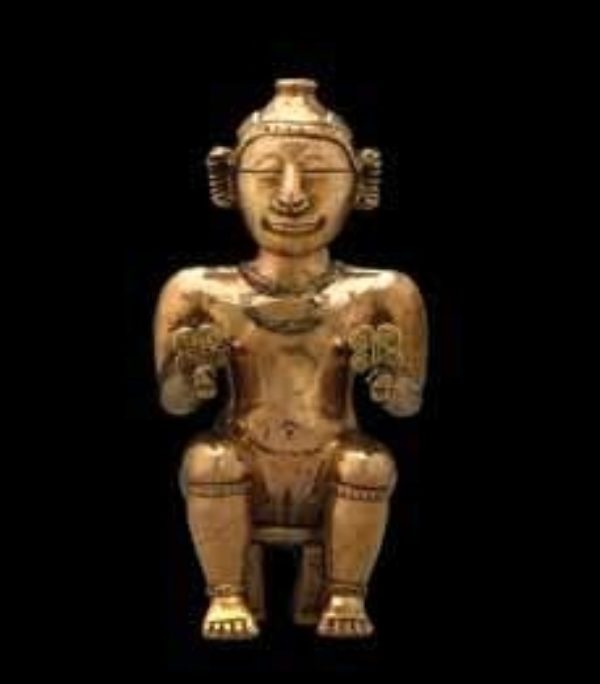 The scene is set the moment you step inside the darkened chambers to a background hum of birds chattering in a rain forest. Penetrating the shadows, you catch soft gleams of gold on every side.

But this is not gold as currency held for its economic value. As the Curator, Elisenda Vila Llonch, explains: “In ancient Colombia, people did not desire or use gold for its economic value. Rather it was revered for its symbolic association and transformative properties, and its association to the sun. This sacred metal was used to create some of the most visually dramatic and technically sophisticated art found anywhere in the Americas before European contact.”

Thus, we are confronted with the gold objects of spiritual leaders who embarked on a mystical ‘soul journey’ played out in the public expansion of identity and rank by chiefs and spiritual leaders accompanying the deceased on the final journey to the afterlife. The gold was transformed into face masks, chest and nose ornaments, ear spools, pectorals, even tweezers for plucking out body hairs. In turn, the natural world of birds, fish, crocodiles, jaguars and bats (for the night world), along with ‘tunjos’ (votive figures) were recreated in gold. A luxury was a lime flask made from a gourd cast in gold, containing lime powder from crushed shells into which a golden spatula or ‘dipper’ was poked after being moistened on the tongue while chewing a wad of coca leaves. These were the fashionable cigarette cases of the day. 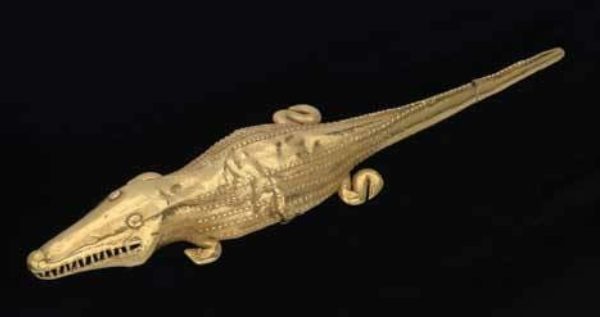 So where did the gold originate and how was it mined and refined? From the beginning, the cordilleras of the northern Andes offered easily worked placer deposits from which gold was carried down towards the rivers that flowed to the Pacific and the Caribbean, that is along the rivers Malagana to the east, the Cauca in the centre and the Calima to the Pacific. Gold was recovered from alluvial deposits using fire-hardened sticks to break up the bank. Gold dust and nuggets were then washed out in shallow wooden trays (much as happened in the California gold rush centuries later) and transported in animal skin pouches down to the valleys. Mining was essentially a seasonal occupation. However, as Curator ElisendaVila Llonch in her handsome book about the exhibition (British Museum Press, 2013) says: “In the principal gold-sourcing areas, such as the mountains of Antioquia, where the important mining site of Buriticá was situated, full-time workers operated. The gold then traded along to the principal craft production centres such as the metal-working site of Dabeiba.There, metals and alloys were smelted in crucibles, ceramic ovens and furnaces, where the desired temperature was reached by the blowing of air into the fire with blowpipes. The result was a small round piece of metal known as a tequelo or ingot. The tequelos were traded to important chieftains to be reworked by local goldsmiths using two processes – hammering and casting.”

They excelled at casting large and small objects using the lost wax technique. Fortuitously, they could use wax from stingless bees (an advantage over the neighbouring Incas in Peru to the south, where bees did not exist, and the manufacture of gold ornaments relied on the hammer). In Colombia, the wax enabled the gold to be moulded into a galaxy of shapes and figures. The wax was first enveloped in layers of fine clay and, once the mould was finished, it was fired. The wax was then melted and poured out to leave space for the molten gold that was poured into the final cast piece. After cooling, the clay mould was broken, and the golden figure emerged. The technique required skilled temperature control. 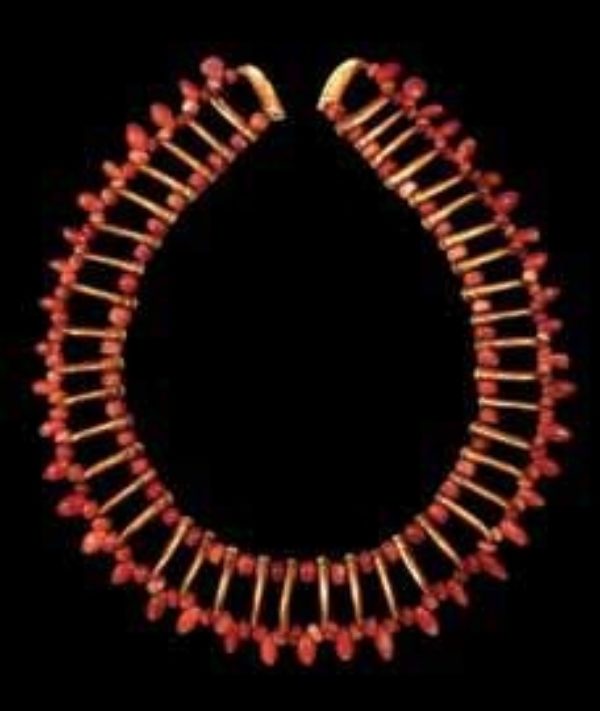 Even more adroit, in the territory of Muisca, stone matrices carved on six sides were used to mass produce wax moulds for casting necklace beads and ornaments.

What fascinates me is that a people quite cut off from the rest of the world before Columbus discovered the Americas had mastered such sophisticated metal-working techniques almost on a scale of mass production in a tradition going back several thousand years.

The prize of this exhibition, almost its symbol, is a pectoral, dating from AD 900, found ina tomb at Timbío in the Cauca region in the 1930s. It depicts a decorated human figure wearing an elaborate headdress and a large nose ring, and accompanied by pairs of bird-like attendants, creating a sublime impression of tranquillity. Equally dramatic is a gold alloy anthropomorphic bat-man pectoral from about AD 900. Craftsmen from the Tairona region made bats and bat-men, as well as body ornaments for the elite. 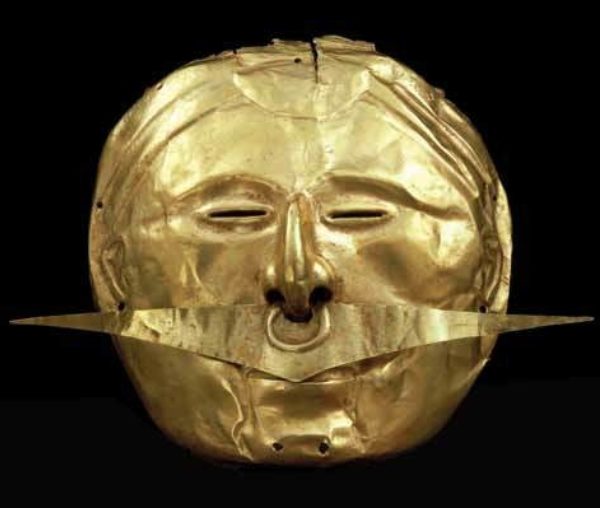 The prize for originality, though, must go to the famous raft or tunjo from Lake Guatavita, a votive offering for a new Muisca ruler, possibly dating from AD 600. As Elisenda Vila Llonch puts it: “They made a raft out of rushes … embellishing it … with the most attractive things they had. They stripped the heir to the skin and anointed him with a sticky earth” on which they placed gold so that he was completely covered with this metal. They placed him on the raft … at his feet, they placed a great heap of gold and emeralds for him to offer to his god … when the raft reached the centre of the lagoon … the gilded Indian then made his offering, throwing out all the pile of gold into the middle of the lake. From this ceremony, came the celebrated name of El Dorado, ‘the gold one’. Over succeeding centuries, attempts have been made to trawl the lake and even drain it. Scattered gold and ceramics have been discovered, but not the riches that legend suggests.

Over the centuries, however, relics large and small have turned up as testimony to aunique society in which the skills of goldsmiths found myriad applications. As early as 1500 BC (contemporary with the manufacture of the finest ornaments in Egypt), the Calima- Malagana made necklaces of gold beads hammered into the shape of insects, with each piece folded into a little finger. Large funerary masks, sometimes with three masks layered one on top of the other, also suggested transformation from the material to the spiritual world.

By 500 BC, the use of relics was more widespread and bold mask pectorals were fashionable among the Quimbaya of central Colombia, who lived close by the Buriticá mining area. One bold mask in the shape of a face has filed teeth (a delight for a modern dentist). The Quimbaya goldsmiths, using the lost wax technique, were tackling double moulds to produce spectacular lime flasks. A robust male and female pair fully naked (male standing, female seated) with body ornaments and piercing marks on their legs indicate body building. However, goldsmiths were not infallible – on the male, a mistake in casting had been patched up, showing it was valued. Perfection comes with two warriors’ helmets of hammered gold decorated with figures and geometric patterns. The gold, however, is soft, suggesting that the helmets were not for use in battle, but more a symbol of status and symbolically strengthened the wearer with the power of the sun.

By 200 BC, the Zenu, who lived on the tropical Caribbean plains and were masters of irrigation, were at the height of their civilisation. Leaders were buried in tombs with impressive gold breast plates. The Zenu also evolved skills in casting thick filigree wires from long threads of wax, creating large, lacy, fan-shaped filigree ear ornaments, and bold moustache-like filigree ornaments. The skill required to cast such complex shapes was impressive, not least the ability to produce the minute beeswax components and to control the flow of molten metal to fill every part of the mould. The Zenu were equally skilled at hammering breast plates and embossing them with jaguars, snakes and alligators, using immaculate repoussé techniques.

Jaguar pendants were often made from an alloy known as tumbago, a mix of gold, copper, silver and, occasionally, a touch of platinum. Tumbago was a stronger metal than pure gold and had a lower melting point. The most dramatic jaguar creation on display incorporates a lime flask crafted by folding very thin sheets of gold to create a three-dimensional shape, which was then clipped to its claws and tail. The jaguar’s nose ring is of platinum, a rare, highly valued metal.

Animals and birds featured widely in goldsmiths’ work. A tiny Zenu toy rattle shows a face with a headdress of two feathered birds’ heads, while flowers and plants with a touch of gold reflected their smell and healing properties. Gold sea-shell pendants were popular, while golden fish hooks may have been used in rituals to encourage a good catch.

As for music, a goldsmith of the Calima- Malagana people hammered and embossed a trumpet as early as 200 BC, while a charming dancer made by the Tolima held a wandin each hand. Ancient Colombia might be declared ‘the gold society’. I can recall no other civilisation where gold was such an integral part of everyday life. And you come out of that humming forest that sets the scene of the British Museum exhibition feeling that you have had a unique glimpse into the goldsmiths’ world several thousand years ago. Go and see the show – it continues until 23 March 2014.

Tim has been writing about gold for over 40 years. His first book, The World of Gold, came out in 1968 and was revised several times. He also wrote The Gold Companion: The A-Z of Mining, Marketing, Trading and Technology for the Swiss company MKS Finance SA. His latest book, The Ages of Gold, on the 6,000 years’ history of the metal, was published in 2007 by GFMS, the precious metals research company, for whom he was also a consultant on world gold markets for three decades. In 2010, he wrote Building a Global Brand, The London Good Delivery List 1750- 2010 for the LBMA.