This is an edited version of a presentation which Shekhar delivered at the LBMA/ LPPM conference in Rome on 30 September. He opines on market dynamics in Asia and the rest of the World and considers the impact that factors including recent government policy may have on the short-term and long- term demand for gold in India. 2012 Conference in Hong Kong 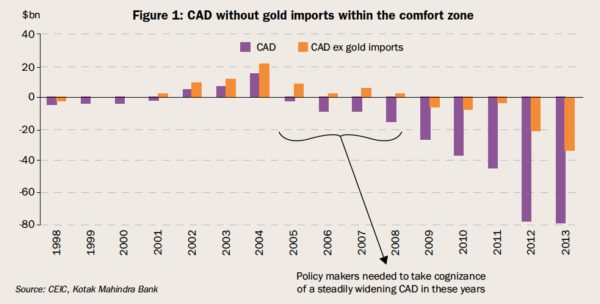 I specifically said in last year’s presentation about India that the key issues affecting jewellery demand in the short-term are:

India had a record number of marriages in 2013, largely due to the fact that there were 23% more auspicious days for marriage.

The monsoon season has been favourable, resulting in more money flowing directly into the hands of 65% of the Indian population.

The third factor, which is critical, is government policy and significant action has occurred. The Annual Report of the Reserve Bank of India (RBI) tells a cautionary tale for macroeconomic variables of risks from the global economy and pitfalls in domestic economic management. The RBI accounts indicate that earnings continued to be from domestic government securities rather than foreign income, which necessarily reflects the key risks in the economy at present– external sector vulnerability and currency risks. Quantitative Easing (QE3) has had an impact on both the external side and trade flows into India, Asia and the World.

If I look at the country and where we can correlate gold, India trade imports are $500 billion and exports $300 billion, which means that there is a trade deficit of $200 billion. Out of the $200 billion, software and invisibles account for $118-$120 billion, which leaves a net deficit of $80 billion. This current account deficit of $80 billion in terms of the ratio to GDP turns out to be 5.1%-5.2%, which is in excess of the acceptable level of 3% for any economy. The Current Account Deficit (CAD) coupled with the Fiscal Deficit makes the currency of the country affected vulnerable.

We have seen challenges to the Indian currency for the last almost eight months and what the government is planning is a result of the challenges of an $80 billion deficit.

Interestingly, $60 billion out of the $80 billion trade deficit is directly attributable to gold alone. Gold is not monetised in India and China as it is kept in lockers and chests, which directly affects the circulation of money in the economy. We all understand that if the money is not utilised, the multiplier is not there and accordingly there is a drain on the monetary system.

“We have seen challenges the Indian currency for the last almost eight months and what the government is planning is a result of the challenges of an $80 billion deficit.”

And accordingly turnaround remains muted, with a best-case scenario at 3.8% pa in 2013 and a worst-case scenario of 2.2% pa. Trade, which is a real measure of growth, is faltering. In spite of Quantitative Easing, trade has not grown, and with unwinding not easy to achieve, growth is proving a challenge.

Therefore, what we have seen, starting from around 17 January 2012, has been around 20 government circulars/changes/notifications, the last one on 14 August 2013, which have specified the focus on which the government is moving. As for the current regulations, anybody who wants to import gold into the country has to compulsorily export 20% of that which they have imported. This is at the importer level, not technically at the consumer level. As of now, if you were to have no exports and only imports, of say $60 billion, you would find that in order to import that $60 billion, you would need to export, on average, a minimum of $12 billion. Whatever changes we are seeing are to address the $80 billion current account deficit, I agree with the steps taken by the government, and the Indian jewellery and bullion industry have been quite supportive of the steps taken by the government.

The jewellery industry supported the country by jointly agreeing not to sell coins and bars, which are in the form of investment. The banks too supported this stance. Of the total Indian demand for gold of around 900 tonnes, 35% is for investment and 65% is for jewellery demand. Demand for jewellery remains unaffected as it is driven more by culture and consumer habits. However, there are alternatives for investment – Fixed Deposits, Mutual Funds, Small Savings, Public Provident Fund etc

Therefore, to summarise, the government is planning to ensure that imports are kept to a bare minimum. Are there alternative solutions and will they be successful? I can say very clearly that government steps are a move in the right direction and are being taken to ensure that India’s entire demand for gold can be met through internal accruals.

”The jewellery industry supported the country by jointly agreeing not to sell coins and bars, which are in the form of investment.”

India has, on average, 22,000-32,000 tonnes of accumulated gold. There have been varying estimates of the amount of accumulated gold over the last 100 years. But there is one important statistic – the accumulated gold within the temples of India is sufficient to meet the country’s demand for at least 10 years. One can monetise idle gold deposits held within temples through the Gold Deposit Scheme (GDS). The gold deposit plans would see gold owners in India – the world’s largest consumer of the metal – give their gold to a bank and earn interest in return. They would also enjoy a “guarantee” from the central bank for the gold’s full return at the end of the deposit period.

The RBI would then lend the deposited gold to jewellery manufacturers, reducing the country’s need for imported bullion and so easing pressure on the Rupee.

Temples may require guarantees by the Indian government before parting with gold under the GDS but that should be workable. With Assured Return on GDS without the worries (and costs) of storage and insurance means that the temples would be more than willing to participate in the scheme. I guess it is a simple solution and initial transactions have been undertaken.

Many people have asked me why, up until now, it has not been thought of or been done before, but I guess you start thinking much more about sensitive issues when you are forced into a corner. I think the problem began in the period since 2009 when the CAD started ballooning. My presentation clearly shows a trajectory of CAD with and without gold. The idea is to share with you the thinking behind what drives the behaviour of the government. I think the central bank and the government are behaving in the right manner with the right perspective to ensure that the country’s CAD and Fiscal Deficit are under control. They feel that gold is one of the assets that can have an elastic demand and that can be postponed. The bank and government are also thinking of innovative solutions in order to meet the demand. These can be in the form of options and in the way they are able to defer the importing of gold into the country.

To conclude, the most important issues affecting short-term demand, for me, are: government policy, the elections next year, somewhere around May 2014, the new policies of the government and the way it is able to think about the deficit and control it. In the last four months, the trade deficit has improved significantly and that is bringing a lot of positive energy. The rupee has appreciated by almost 13% from where it was a few months ago. We have a new Governor, and the right thoughts and actions are moving India forward in the right direction. However, in the long term, we feel that the demand for gold in India remains unaffected. Also, once the temple gold issues/ process is settled, 2016 may see zero imports of gold!

These are the issues that are impacting on the supply side. On the demand side in the long- term, India is more driven by culture and habit.

Shekhar Bhandari is the Business Head for Forex, Derivatives and Precious Metals in the Treasury division of Kotak Mahindra Bank

His interests include Foreign Exchange, Precious Metals, Derivatives, Treasury, Economy, Risk Management, Distribution and Marketing of Financial Products. He is a regular speaker at various forums on these areas of interest.