Voices of the London Bullion Market

The success of the City of London in maintaining its pivotal role as the world’s leading bullion market for over 200 years has been an astonishing achievement. Over the last 30 years, the London Bullion market has undergone a radical transformation from a British elite system, once based upon mutual trust and gentlemanly understanding, to a transnational forum. 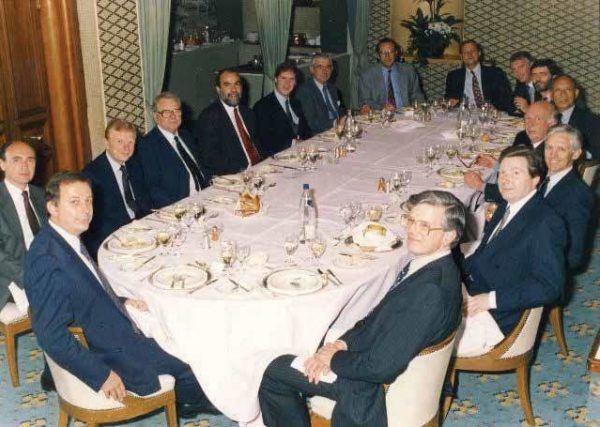 Bullion market dinner in the mid 1980s to mark the retirement of Dennis Suskind of J. Aron.Many of the most familiar and influential figures in the London bullion market are shown in the photograph including some of those who helped to set up the LBMA. Pictured left to right are Les Edgar, Chris Tors, Keith Smith, Stewart Pixley, Dennis Suskind, Robert Guy, Guy Field, Robert Stein, John Bishop, Alan Baker, Neil Newitt, K C Wu, Jack Spall, Doug Bull, Brian Nathan and Robert Beale.

‘Voices of the London Bullion Market’ aims to capture, contextualise and explain this transformation. The recent 25th anniversary of the London Bullion Market Association offered a time for reflection and celebration of the Association’s achievements. Robert Guy, one of the original architects of the LBMA and the very first chairman, in his article for the special Silver Anniversary edition of the Alchemist, discussed some of the difficulties the London market had faced and shared his memories of the formation and early years of the Association.

The LBMA now plans to build on such memories to capture the transformation from the inside. It invites members of the Association past and present, as the generation of workers that shaped and experienced change, to tell their stories. Dr Michele Blagg, a research associate at the Institute of Contemporary British History at King’s College London, has been commissioned to conduct an oral history project on behalf of the Association. The collection of interviews with participants involved in historical events has long been a complement to written records, adding personal detail and enhancing understanding of causes and contexts. In recent years, oral testimony has become even more important as the capture and management of email and mobile communications tends to lag behind more traditional record-keeping.

Since January, Michele has compiled a list of participants and events connected to the LBMA. She has immersed herself in the Association’s archives, consulting past copies of committee meeting minutes, early newsletters and articles from the Alchemist, and locating a variety of literature and media reports from other sources.

Should you like to participate in this project, or share memories, photographs, old newsletters or other artifacts, Michele can be contacted at: voices.project@lbma.org.uk .

As prepared by Michele Blagg

On 14 December 1987, the London Bullion Market Association was formally incorporated. In light of changes in the supervision and regulation of the financial markets that took place in the United Kingdom that year, the five members of the London Gold Market, together with other participants in the trading of precious metals in London, instituted a Steering Committee to explore the possibilities and problems involved in the creation of a new market association. Committee members were selected on the basis of their personal experience of the Market, rather than as representatives of a particular company. The number was limited to six in order to “achieve swift progress without unnecessary bureaucracy”. The Steering Committee was made up of Robert Guy – Chairman, Guy Field – Vice Chairman, Keith Smith, Jack Spall, John Wolff and Neil Newitt.

From the Steering Committee’s inception, The Bank of England, which held responsibility for the supervision of the wholesale bullion market, was involved in the Association’s affairs and assisted in the drafting of the relevant Code of Conduct. Observers continue to attend Management Committee Meetings to the present day. In addition, the Committee has maintained close contact with H M Customs & Excise in respect of exemption to Value Added Tax for members of the Association.

Membership application forms were available. Potential members were made aware that existing Associate Membership of the London Gold Market/London Silver Markets did not ensure membership of the new Association. In addition to the Management Committee, a number of specialised committees were formed to deal with particular aspects of the Market. These included Membership, Finance and Physical, Public Affairs and Market Development. In each case, the expertise of other bullion market practitioners was, and continues to be, called upon. In order to qualify for market maker membership, companies had to fulfil a set of criteria that would entitle them to be listed as such by the Bank of England. All members paid an entry fee of £2,500 plus an annual subscription.

The Memorandum of Association defined the remit of the LBMA as:

Deemed to encompass, but shall not be limited to, those companies partnerships and other organisations which are actively engaged, in trading or refining or melting and assaying or fabricating or transporting, or vaulting gold and /or silver bullion within, or with or for persons in, the United Kingdom.

While the Articles of Association set out in more detail the way in which the LBMA would operate. It was very much hoped that the new LBMA would receive strong support from both the market and its customers. Membership of the LBMA was two tiered:

The membership and Articles defined the role of the Association and among the specific objectives were:

The Bank of England published its list of Listed Institutions and the LBMA formally admitted to membership 13 Market Maker Members together with 48 Ordinary Members.

The Inaugural Dinner at Goldsmith’s Hall took place. The Guest of Honour was The Rt. Hon Robin Leigh Pemberton, Governor of the Bank of England. One hundred and seventy-eight representatives of the Members and Guests attended, with some travelling from Australia, Japan, Switzerland and the United States to be present. The evening received wide coverage by the media.

The Association hosted its first seminar at the Savoy Hotel. Mr Timokhine, Senior Manager Precious Metals at Vnesheconombank (Bank for Foreign Economic Affairs, Moscow), outlined the Bank’s central role in the handling of the Russian State’s gold business and then participated in a question and answer session. The event was well supported, with feedback from members indicating that the evening was appreciated and the Association should hold further seminars from time to time.

Michele Blagg (BA(hons), MA, PhD) is a visiting Research Associate at the Institute Of Contemporary British History(ICBH). As part of a collaborative doctoral award granted by the Art’s and Humanities Research Council, she was based at the Rothschild Archive, London. Her doctoral research focused on the Royal Mint Refinery, operated by N M Rothschild & Sons between 1852 and 1968, and how it adapted to the changed London gold market. Her areas of interest are in financial and business history with special regard for the actors and networks located in the London market. Her publications include ‘Gold Refining in London: The End of the Rainbow, 1919-20’ in The Global Gold Market and the International Monetary system from the late 19th century to the present (forthcoming, 2013); ‘The Royal Mint Refinery, a business adapting to change’ in Business Archives Council, Sources and History. She teaches on the ICBH MA in Contemporary British History and assists with the Witness Seminar Programme. She sits on the Business Archives Council Executive and is involved in the annual ‘Meet the Archivists’ workshop held in the City that aims to explore ways in which research students can identify and use business records in a variety of different research fields.