Some academic studies argue that the cost of gold extraction drives changes in the gold price (see Levin and Wright (2006) as an example). This notion is used to explain the channel through which a long-run relationship between gold and inflation comes about: that as inflationary factors drive up the cost of mining gold, mining companies demand higher prices to compensate them. Here we show that, to the contrary, the gold price should and does cause changes in the cost of extraction. 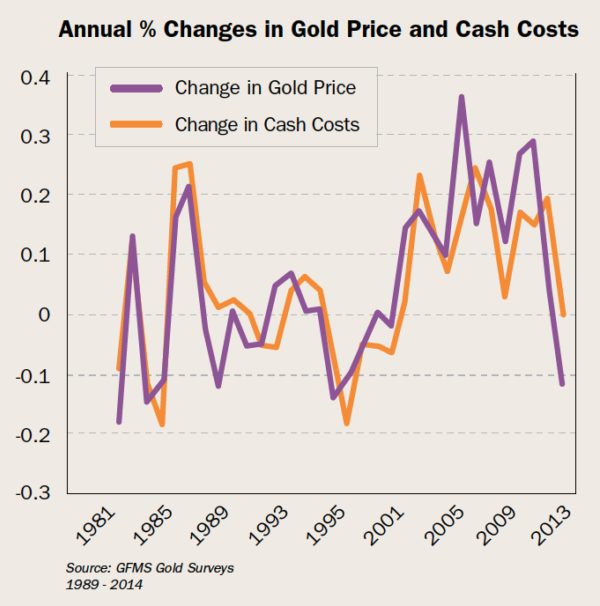 Under David Ricardo’s 200-year-old Law of Rent, the most fertile land is farmed first – or the mine where gold can be extracted at the lowest cost per ounce is mined first. As the demand for gold (or any commodity) increases, its price rises. At these higher prices, it will be profitable for marginal mines, which would have been loss-making at lower prices, to be brought into production. This means that the average cost of extraction for the industry as a whole should rise after prices do and because of the rise. This would make low-cost mines even more profitable and allow overall production to expand to meet increased demand.

Another reason it seems unlikely that miners will be able to set the price of gold in order to compensate themselves for rises in extraction costs is that they seem to lack the market power to do so. Any shortfall in supply can be met in the gold market by a number of types of suppliers and not just miners. Mining companies are not solely required to fill the void.

Gold is unusual among commodities in having a vastly larger accumulated stock than its annual flow from mines, a fact which is due to the very small amounts of gold that are lost from the system each year to reduce the stock. Although it is arguably the most near-market source of potential supply, gold miners only account for a small amount of the gold theoretically available for sale at any given time. This is in contrast to other perishable commodities where the annual supply from production is roughly equal to the total supply available that year.

The amount of gold minded each year relative to the stock of gold available for sale makes it likely that gold miners have low market power and are price takers rather than price setters. From the perspective of the historical gold stocks, gold miners’ annual supply adds only about 1.6% to the total estimated stock of gold available (World Gold Council, 2010; GFMS, 2013). Recycling provides a route for less liquid sources of ‘supply’ through returns from ‘demand’ sectors such as jewellery back into circulation to meet demand. Indeed, as gold prices increased dramatically between 2003 and 2010, the supply of gold from this channel doubled.

The issue with this proposed channel to explain gold’s link to inflation comes into view clearly when we consider what happens when demand falls, causing the price to fall as we saw during the gold ETF sell-off in 2013. Now mines that are high cost are under pressure to modify mine plans to reduce cost, or otherwise cease production. Either way, average extraction costs fall. The cost of extraction is following a market- determined price and not moving ever upwards with inflation.

We use annual gold prices and the world cash costs between 1981 and 2013. This testing allows us to be 99% confident that gold prices cause cash costs. We can be 95% confident that cash costs have an effect on prices, but the analysis gives an unusual result. A rise in gold prices in the previous year causes cash costs to rise by about 76% as much, so that a$10 rise in prices causes a $7.60 increase in cash costs. Only changes in the previous year are found to have causal effect. When we look at the relationship between costs at a national level and dollar gold prices, our findings are confirmed in the vast majority of cases. We also run this test using total production costs and the finding is the same.

This theoretical and empirical evidence points to the fact that gold prices are a determinant of producers’ cash costs as we suggested, with rising prices causing rising costs. Another channel is needed to explain why many studies find a link between the gold price and inflation.

Fergal O’Connor is the current holder of the LBMA bursary and is Senior Lecturer in financial economics at York St. John Business School.

Brian is Professor of Finance at Trinity College Dublin, and he also holds visiting positions at Glasgow Caledonian University and the University of Ljubjanja Slovenia. His research areas include the financial economics of precious metals, behavioural finance, international finance and financial integration and he is editor of two academic journals (International Review of Financial Analysis and Journal of Behavioural and Experimental Finance). He has published over 60 academic papers and several books.

Having joined GFMS Ltd as a Metals Analyst in 2005 to cover the mining sector, William was brought across to Thomson Reuters in GFMS’ 2011 acquisition and holds the role of Research Director – Precious Metals Mining, within Thomson Reuters’ Commodity Research & Forecasts division. He has accountability for the mining team’s research output of global production, mining costs and producer hedging research across the precious metals.