Martin Murenbeeld reviews the impact of US monetary policy on the global gold price and considers the extent to which the gold market, and the gold ETF market in particular, has discounted any likely hikes in US real interest rates and the US dollar in 2014-2015. 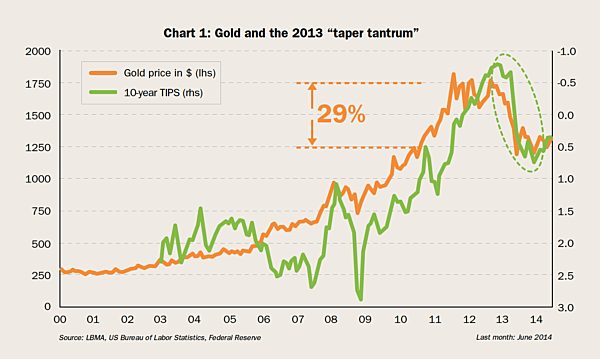 Gold prices plunged in 2013 for a number of reasons, not least of which was the ‘taper tantrum’ where debt markets sold off around the world on fear of Fed policy tightening. Chart 1 highlights just what happened: gold prices declined quite precipitously in the first half of 2013 – right around the time the 10-year TIPS yield (US Treasury Inflation Protected Security) rose. (The TIPS scale is inverted.) US real long- term yields rose and gold declined; indeed, not many gold observers would disagree with the thesis that rising US real interest rates are negative for the gold price!

As it stands, Chart 1 would appear to explain everything that happened in 2013; the ‘fit’ is tight and the correlation of TIPS with the gold price is a very significant -0.87. Since most everyone agrees that US interest rates must inevitably rise, albeit no one knows just when and by how much, Chart 1 makes the point that gold prices must inevitably decline yet further.

I am bullish on the gold price, but this alone is not a sufficient reason to be critical of Chart1 and its negative price implications. Take a look at Chart 2. It is the same chart but with one critical difference: the gold price level (i.e. $1,300 per ounce) has been replaced with the year-over-year percent change in the gold price! 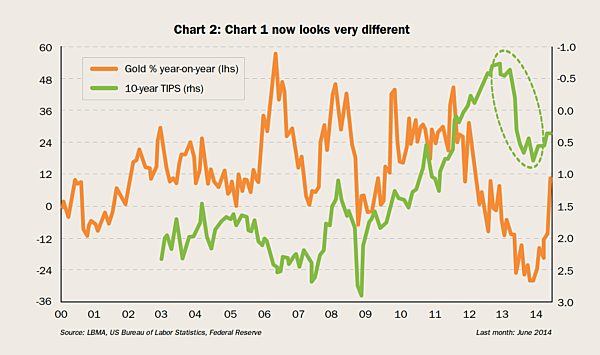 Chart 2 looks quite different; indeed, the high, negative correlation between TIPS and the gold price vanishes. The reader might also observe that the gold price actually turned before the TIPS yield rose.

So, which chart is right? Well, in the forecasting business, if a chart looks good, it tends to be used – right or wrong. And Chart 1 definitely looks good!

But there is a fundamental statistical problem with Chart 1: it compares a ‘level’ variable with a ‘change’ variable. (Statisticians call this a comparison of a non-stationary variable with a stationary variable; the latter has a stationary mean, the former does not.) In Chart 2, both variables are ‘change’ variables, and both are now ‘stationary’. More important, Chart 2 suggests that Chart 1 might actually be overstating the strength of the relationship between US real interest rates and the price of gold! 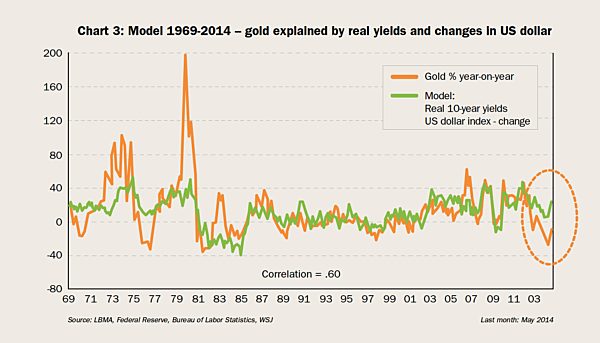 To help us unravel this relationship, we constructed a simple model of the year-on-year change in the gold price in terms of US real interest rates and the change in the US dollar. (We added a US dollar variable to the model because the dollar is one of the most important variables for the price of gold; the deletion of the dollar from a model that purports to estimate the impact of real interest rates on the change in the gold price will accordingly lead to a biased estimate.) All three variables in the model are stationary.

Chart 3 highlights this model estimated with data for the period 1969-2014 and Chart 4 highlights the same model estimated with data for the period 2000-2014. (We often change time periods in order to gauge the stability of the model’s co-efficients.) Both models have a good fit, but they clearly do not explain all of the changes in the gold price over the respective time periods. Notably, the models do not explain very satisfactorily what happened in 2013; indeed, the percent decline in the gold price in 2013 is much larger than what the models suggested it should have been (note the circles on Charts 3 and 4). 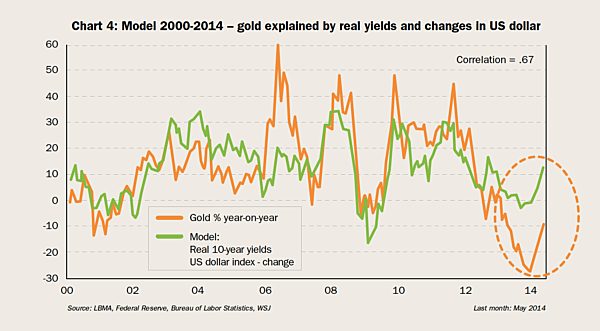 With the help of these two models (and one other estimated with data for the period 1989- 2014, the results of which are presented in Table 1), we can estimate just how much the gold price ‘should’ change on the back of a rise in US real interest rates and/or a rise in the US dollar. (By the way, the models do not use the US TIPS yield but a more common measure of real yields: the nominal 10-year Treasury yield less the current rate of inflation – see Table 1 and the box therewith for a further explanation of the variables.)Let’s assume that the real 10-year Treasury yield will rise 250 basis points in the coming year and that the US dollar index will rise 1,000 points. The nominal 10-year yield is currently about 2.5%, which, with inflation running at about 2.0%, puts the real yield at around 0.5%. A rise of 250 points would therefore take the real yield to 3.0% (the nominal 10-year yield would rise to 5.0% were inflation to remain at 2.0%). I don’t think any readers expect such a significant rise in real long-term US yields. Furthermore, a 1,000-point rise in the dollar index would take the index from, say, 80.00 to 90.00, which is a substantial rise. (The DXY, a commonly used index for the US dollar, is around 81 currently. We use our own dollar indices however.)

“We suggest that, on the evidence of the models, that gold has indeed discounted what the Fed is likely to do!”

But gold already declined 29% in 2013! Yes, the TIPS yield and other measures of US real interest rates did rise for a brief period in 2013, and the US dollar index also rose somewhat. But Charts 3 and 4 indicate that these developments weren’t nearly sufficient to account for the 29% decline in the price of gold.

Of course, there were other factors that hurt the gold price in 2013, including: (1) EU demands that Cyprus sell its gold to help with the bailout; (2) a significant reduction in the risk of a eurozone break-up; and (3) the continuing surge in equity markets (which erodes investment interest in gold). These factors are not included in the model described above.

Nor does the model include a variable to specifically account for the massive gold ETF sales in 2013! The reader will recall that there was a tremendous concentration of selling from the ETF sector last year; indeed, such concentrated selling might even be regarded as ‘herd selling’, ‘trend selling’ or, dare we say it, ‘panic selling’! In our opinion, ETF sales go a long way to explain the discrepancy between the models and the actual change in the gold price. Yet, all this raises a fundamental question: has the gold market – and the gold ETF market more specifically – now discounted fully any likely hikes in US real interest rates and any likely rises in the US dollar in 2014-2015?

We suggest that, on the evidence of the models, that gold has indeed discounted what the Fed is likely to do! A ‘bear’ might argue that the decline in the gold price from (roughly) $1,750 to $1,250 was a return to ‘fundamentals’ – that gold rose too much in 2010-2012 and had to come ‘back down to earth’. Accordingly, the ‘bear’ would argue that there could well be a further 29% decline in the gold price were the draconian hikes in real interest rates and the US dollar assumed above to come about!

But the ‘bear’ would then also have to argue from which sector of the gold market the selling would originate. Presumably, the ‘bear’ would argue that it would be from the ETF sector again. But would those holders of ETFs who did not sell in 2013 finally decide to throw in the towel in 2014 and 2015? (Gold ETFs are much more widely held now that a few heavy hitters sold out their positions in 2013.) Or would the bear argue that Chinese demand will decline precipitously, despite the fact that the average Chinese buyer is not as attuned to US dollar and Fed policy developments as North American and European buyers appear to be. The point is, selling pressure has to come from somewhere, and/or demand has to plunge, in order that the 29% price decline estimated on the back of these assumptions is realised.

“No one can say with certainty just how the gold market – or other markets – will react when the time comes for the Fed to hike short-term interest rates.”

The proof of the pudding is in the eating, so we have to wait and see. No one can say with certainty just how the gold market – or other markets – will react when the time comes for the Fed to hike short-term interest rates. (And there are many other variables at play in the gold market – not least of which is the geopolitical variable.) However, Chart 1 does not suggest gold rose too much in 2010-2012; indeed, it suggests, because gold should have been even higher than $1,750 in 2012-2013, that $1,750 is was not necessarily ‘too high’ at all! Nor does Chart 4 (my preferred chart) suggest that the monthly year-on-year rises in the gold price before 2013 were excessive in the same manner that the monthly declines in 2013 were excessive. Assuming in other words that $1,700-$1,750 was indeed a fundamentally supportable price level for gold at the time, then the analysis suggests that the gold market is now ahead of the curve – that the gold market has already reacted to what the Fed may throw at the markets over the next 12 months.

Let me add further that the Fed’s game plan is not to raise interest rates before inflation pressures re-emerge; indeed, it is very likely that real short-term interest rates will remain below zero for most of 2015. (This is also the conclusion one draws from analysing the famous FOMC ‘dots’!) And if US real short-term rates do not rise significantly over the next 12 months, it is extremely difficult to expect US real long-term yields to rise by the amount assumed above, i.e. by 250 basis points.

As always, it will be an interesting time in the gold market going forward.

Martin Murenbeeld is the Chief Economist of Dundee Capital Markets, a division of Dundee Securities, a Dundee company.

Dr Murenbeeld graduated from the University of California, Berkeley, in 1972 with a PhD ininternational finance. He then joined the Faculty of Management Studies at the University of Toronto to develop the international business curriculum in the MBA program, where he was a Faculty until 1978. Dr Murenbeeld started M. Murenbeeld & Associates Inc., an economic consultancy in the area of international finance. The company was bought by DundeeWealth Inc. in 2004 and he was Chief Economist of that firm until his departure in 2013 to join Dundee Capital Markets as its Chief Economist.

Frequently quoted in the financial press and a regular speaker at international precious metals and foreign exchange market conferences, Dr Murenbeeld has over 30 years of independent consulting experience in the gold, currency and credit markets and is currently also an adjunct professor (international finance) in the Faculty of Business at the University of Victoria.