Victoria Newman reviews the history of the Sovereign, the flagship gold coin of The Royal Mint, and one of the world’s most famous gold coins with a rich and varied history that dates back for more than 500 years. 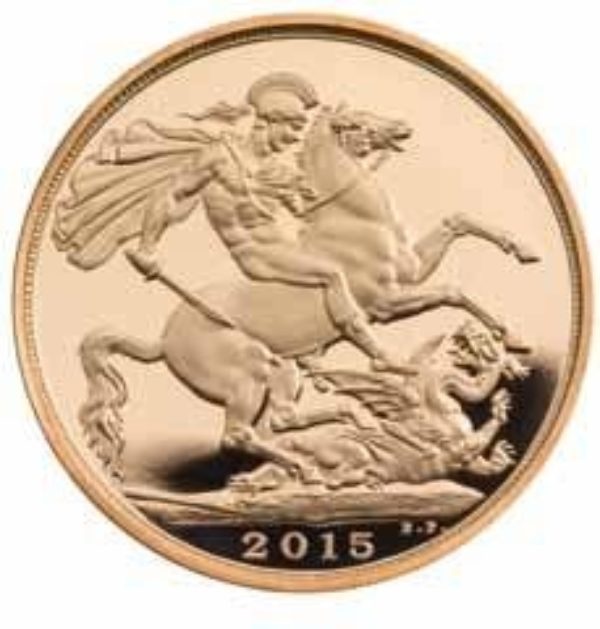 Dr Kevin Clancy, Director of the Royal Mint Museum, stated: “The gold Sovereign was first introduced in 1489 when Henry VII instructed the Mint to produce ‘a new money of gold’, which would be the largest coin England had ever seen, both in size and value, making in the process a strong statement about his reign. This coin was named a Sovereign and carried an enthroned portrait of the king in coronation robes on its obverse, whilst the reverse depicted the Royal Arms, crowned and superimposed on a magnificent double rose to symbolise the union of York and Lancaster. Large and handsome, the coin was clearly intended to augment the dignity of the king and to propagate a political message of stability and prestige, rather than to fulfil any pressing practical role in circulation. The Sovereign was struck in turn by each of the Tudor monarchs, the observe continuing to feature the reigning king or queen, before its issue came to an end under the rule of James I.” 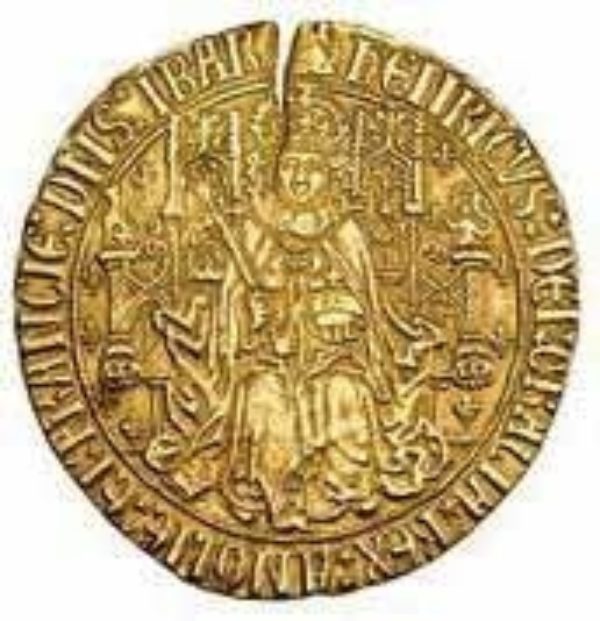 The French Revolutionary Wars (1792-1802) and the Napoleonic Wars (1803-1815) led to financial instability and economic difficulties in Britain. In an attempt to restabilise the county’s currency, the British Government took the decision to adopt the gold standard.

As a result of this Great Coinage of 1816, the value of Britain’s currency became tied to the value of gold and a new circulating gold coin with a value of 20 shillings was introduced – the Sovereign. 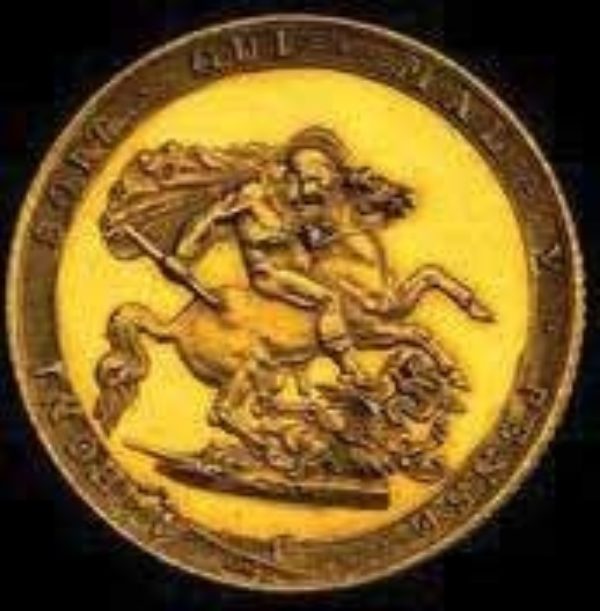 Almost half the weight and diameter of the original Sovereign, the new gold coin of 1817 more than matched its predecessor in the beauty of its design. The Italian engraver Benedetto Pistrucci was given the task of designing the reverse image for this new 19th-century Sovereign and created his own classical depiction of St George and the dragon to take pride of place on the coin. Whilst this now iconic design continues to be struck on Sovereigns today, its initial outing actually lasted for only eight years before it was replaced by more conventional heraldic designs in 1825.

Following a series of shields and Royal Arms designs, Pistrucci’s St George and the dragon was selected to be struck on the Sovereign once more in 1871 alongside the young head of Queen Victoria, until 1887. That year, to coincide with the Queen’s Golden Jubilee, new designs were chosen to appear on circulating coins, but only St George was sanctioned by the Chancellor of the Exchequer to grace the Sovereign.

What are Proof coins?

They are the highest quality coin produced by The Royal Mint and are ideal for collectors wishing to own coins with the highest levels of craftsmanship and design detail.

The dies used to strike Proof coins are all hand- finished to ensure that all imperfections are removed before they are used to strike a coin. Proof blanks are of a higher quality than Brilliant Uncirculated and Bullion blanks, and each Proof blank is placed into a coin press by hand. Proof coins will be struck up to six times, at a lower speed and with less pressure than other finishes to ensure a smoother, sharper finish and to preserve the finer details of the design.

The dies are cleaned with air between the production of each coin to ensure that no marks or imperfections are caused during striking, and each Proof coin is removed from the press by hand and checked for imperfections after being struck. As a result of the extra care and attention, no more than 50 Proof coins can be struck per hour, whereas Bullion coins are produced at a rate of around 3,000 coins per hour. The Proof dies are regularly reworked and repolished to maintain a blemish-free finish when striking, and each die may only strike a few hundred coins before it has to be repolished.

It is not the quality of the finish alone that makes Proof coins so appealing to collectors and gift buyers. Often struck with low mintages, Proof coins are also rarer than other coins. 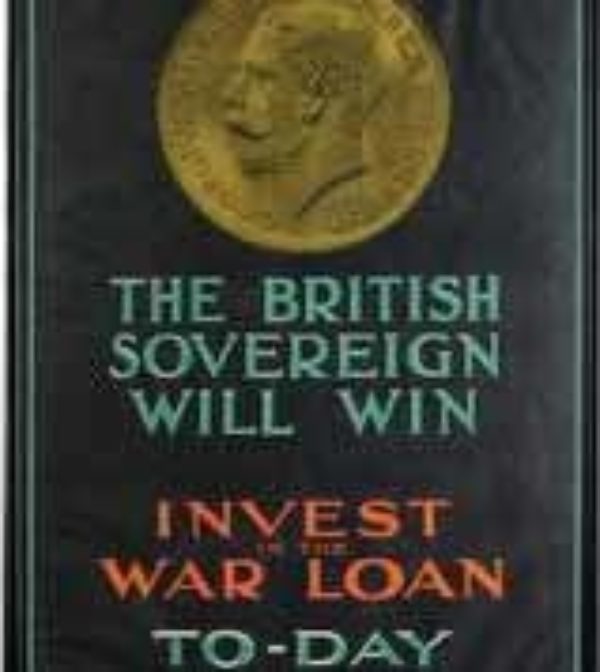 A First World War poster from 1914

This principal gold coin of the United Kingdom went on to become recognised as currency across the globe and, at the turn of the century, more than 100 million gold Sovereigns were estimated to be in general circulation in the United Kingdom alone.

However, at the outbreak of the First World War in 1914, Britain needed tangible assets to help finance the war effort and the Sovereign became a luxury that it could no longer afford, leading to appeals to the patriotism of British citizens to give up their Sovereigns for their country rather than hoarding them in their homes.

To supplement the coinage, the Treasury began to issue paper bank notes for these amounts, which came to be known as ‘Bradburys’, because they carried the signature of the then Secretary to the Treasury John Bradbury.

The first bank notes were issued on 7 August 1914, only three days after war was declared, in denominations of ten shillings and one pound, the equivalent in note form of the Half-Sovereign and Sovereign respectively, and continued to be produced until 1928, when the Bank of England took over responsibility for issuing the one pound and ten shilling notes.

The Royal Mint continued to strike Sovereigns on a decreasing scale until the summer of 1917, but these iconic gold coins are said to have largely disappeared from circulation in London by June 1915.

Despite the Sovereign’s disappearance from circulation, the personal desire of many individuals to own a gold coin did not waiver and, in 1957, The Royal Mint recommenced striking the coin to a bullion standard to meet growing demand.

In a change of fortunes, the Sovereign has progressed from acting almost entirely as a circulating coin to one that continues to offer great appeal to gold bullion coin purchasers because of its reputation for integrity and assay accuracy – accuracy of fineness and also accuracy of weight and diameter.

“The Sovereign continues to bear the legendary St George and the dragon design created by Italian engraver Benedetto Pistrucci in 1817 on its reverse.”

It is also produced as a Proof quality collectable coin, whose annual ‘release’ is much anticipated by numismatic enthusiasts the world over, and it has come to play a key role as a golden gift for special occasions and anniversaries.

The Sovereign continues to bear the legendary St George and the dragon design created by Italian engraver Benedetto Pistrucci in 1817 on its reverse. When the minting of Sovereigns resumed in 1957, there was no thought to replace the classic design, which has appeared on every bullion Sovereign of the current reign with the exception of just four special occasions. These rare changes took place in 1989 for the special commemorative coins celebrating the 500th anniversary of the original Tudor Sovereign, in 2002 for the Queen’s Golden Jubilee year, again in 2005, and in 2012 for the Queen’s Diamond Jubilee.

Whilst the 22 carat gold Sovereign has seen some major changes occur in its country of origin in the century since the First World War, it has managed to remain fundamentally unaltered in its design and composition, and remains the most accurately specified coin in the bullion world, with its weight of 7.98805 grammes and purity guaranteed to five decimal places by the Coin Act of 1971.

Today, the quality of the Sovereign is tested using the most modern assay techniques and independently verified each year in one of the oldest known quality assurance processes, the Trial of the Pyx.

This is an independent judicial ceremony that dates back to the 13th century and takes place annually at the Hall of the Worshipful Company of Goldsmiths in London. Throughout the year, coins are randomly selected from batches of certain denominations struck during that year, sealed in bags containing 50 coins each and locked away in the Pyx chests for testing at the Trial (see overleaf for more details).

What are Brilliant Uncirculated coins?

Brilliant Uncirculated coins are a higher standard than circulating and Bullion coins, without the extra finishing and detail provided on Proof coins and offer a good level of design detail but with lower definition than Proof coins. They are intended as an entry-level collectable coin or as the perfect affordable gift for someone looking to mark a special year.

What are Bullion coins?

Bullion coins have a similar standard of finish to circulating coins. They are generally bought for their intrinsic qualities. The production of Bullion coins places an emphasis on efficiency of production and reducing cost.

The finish on Bullion coins is not specifically intended to highlight the detail and artistry of the coin’s design, or the craftsmanship and skill of its minting. However, Royal Mint Bullion coins are renowned for their distinctive and beautifully rendered designs, and the beauty of the Sovereign in particular continues to capture the eye of the beholder in a Bullion finish

Victoria Newman has worked as a PR and Communications Manager for The Royal Mint since December 2013. She is responsible for marketing the company’s commemorative coins, medals and bullion products, in addition to running the press office function. Victoria has over ten years public relations experience working for clients in the public sector, energy, utilities and IT industries. 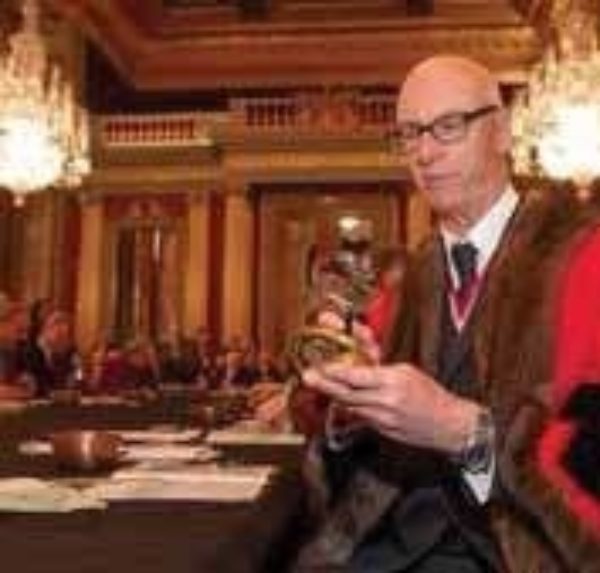 Sovereigns are inspected at the Trial of the Pyx

Trial of the Pyx

The Trial was first recorded publicly in 1282 and is today presided over by the Queen’s Remembrancer or their deputy, who are amongst the highest legal representatives in the country, assisted by an independent jury of Liverymen of the Goldsmiths’ Company.

During the ceremony, jury members are presented with Pyx boxes (Pyx being the Roman word for chest). The coins are selected from a random selection provided by The Royal Mint and are placed in copper bowls. The remainder are placed in wooden bowls and are then weighed for accuracy. The Trial is then adjourned until May to allow time for trial coins to be tested by Goldsmiths Assay Laboratory and the National Measurement Office.

They are tested against Trial Plates held by the UK National Measurement Office, and an independent jury, which includes senior financiers from the financial world accompanied by assayers from the Worshipful Company of Goldsmiths, confirms that the coins are within the statutory limits for metallic composition, weight and size.

“Modern legislation does mention penalties for an adverse verdict by the Pyx jury, yet there have been stiff punishments for failure in the past.”

Whilst modern methods such as XRF (X-Ray Fluorescence) are often used in assaying, it isstill only the centuries old methods such as cupellation (the fire assaying of gold) that are accurate enough in the testing of metals and therefore remain credible for checking the accuracy of the coins of the realm for the Trial of the Pyx verdict.

Modern legislation does not mention penalties for an adverse verdict by the Pyx jury, yet there have been stiff punishments for failure in the past. The Master of the Mint (today a role held by the Chancellor of the Exchequer) went to prison for six weeks in 1318 and even Sir Isaac Newton was at loggerheads with the jury during his time as Master of the Mint when the integrity of his coin samples was questioned.

Whilst the Trial is steeped in ancient traditions and attended by officers with some of the oldest job titles in the land, the Trial of the Pyx is as relevant today as it has always been. It continues to play an extremely important role in endorsing The Royal Mint’s reputation for reliability and integrity and guaranteeing the enduring excellence of the Sovereign.