Gold has been used for centuries for jewellery purposes and as a savings vehicle. The features of gold that distinguish it from many other minerals are its ability to be converted into different forms due to its easy processing, its being one of the best conductors in nature, its use in many areas of industry due to lack of corrosion, its being an indispensable material in the making of jewellery and ornaments, and its store of value. 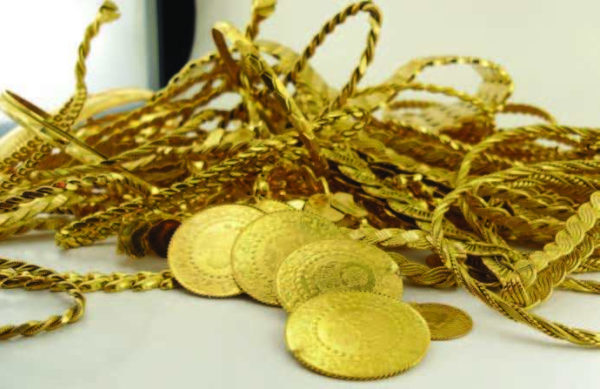 We believe that one of the most important reasons why gold is accepted as a store of value is that gold does not represent anyone’s debt. Today, national currencies are a form of debt security for the countries in which they are printed. Therefore, with all transactions carried out in a particular currency, you are effectively taking on the risk of that country. Gold is not tied to any particular country but is a store of value which is internationally accepted, and which is almost completely independent from political risks. Therefore, gold is considered to be somewhat of a safe haven in either periods of crisis or political instability.

Gold is part of a centuries-old savings and investment culture in Turkey. Due to the financial system only recently developing in Turkey, and with low financial literacy and a lack of freely available information about other investment opportunities, people have tended to invest in gold. This is both easy to achieve and familiar to people who have turned to gold historically from generation to generation. Physical gold, seen as a traditional means of saving by households in Turkey, is typically kept under the mattress rather than held with banks. 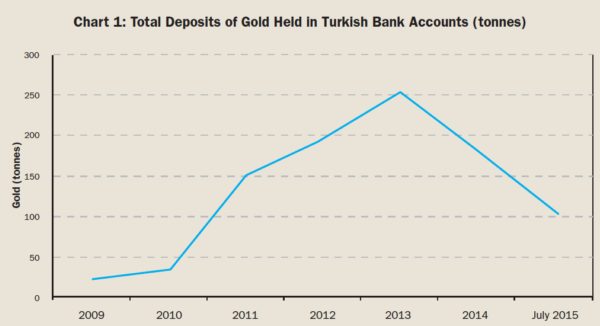 Gold has an important place in Anatolian culture: it is used both in jewellery and as an investment tool. Until the liberalisation in the 1980s, gold prevailed for centuries as almost the sole store of value and investment opportunity. Since the 1980s, investors, despite having been introduced to other investment opportunities (such as foreign currency and other financial market instruments), have not removed gold from their investment portfolios.

Traditionally, gold has been regarded in Turkey as a safe haven in periods of financial crisis. There are many reasons for this, including for example, local jewellers being trusted and respected, gold owners not having sufficient information regarding other investment opportunities and also the erosion of trust in the banks during the 1990s through to the beginning of the 2000s.

Turkish people have been accumulating gold for centuries, and this gold is generally stored in a safe location in their own homes, for example, in safety deposit boxes and in the form of jewellery from reputable jewellers. As a result of this form of storage, gold remains outside of the economy and therefore the value of gold held as savings cannot be easily calculated.

In 2008, the banks began to offer a new product to customers – gold accounts denominated in either 24 carat, 995/1000 or 1000/1000 purity. Interest in these gold accounts began to develop, particularly as the price of gold increased as a result of the global financial crisis. This resulted in a shift away from gold being held under the mattress to being held on deposit in banks.

“Approximately 50 tonnes physical gold has been collected since 2011.That amount is now inside the banking system.” 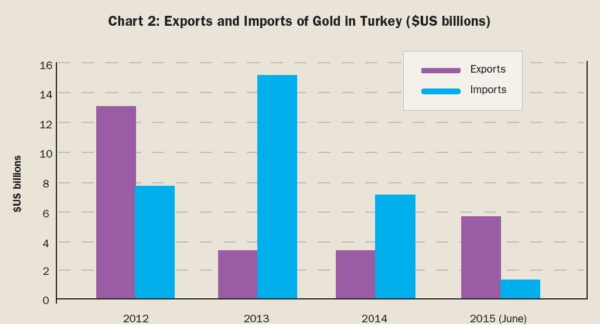 However, banks’ gold accounts were not enough in themselves to bring ‘under the mattress gold’ within the formal-registered financial system. In 2011, under the leadership of the Istanbul Gold Refinery (IGR), a new project was launched in partnership with the banks. This project enabled people to bring their physical gold to the bank branches, where IGR experts would value the customer’s or potential customer’s physical gold in the bank branch and then transfer the equivalent value of pure gold direct into their gold account. The IGR started this project with one bank in 2011 and, since then, the project has been extended to 11 major banks, which are now involved in collecting scrap gold from the public.

Approximately 50 tonnes of physical gold has been collected since 2011. That amount is now inside the banking system.

Why is it so important for gold stored under mattresses to be contributed to the economy? There are several benefits; for example, it can:

The low savings rate in Turkey is an issue that has become a chronic problem in recent years. One reason for the savings rate being so low in official reports is that a significant proportion of current savings are held outside the financial system.

The amount of gold estimated to be stored under mattresses

According to the study by the Turkish Central Bank published in October 2012, in 1984, the amount of gold remaining in our country (after allowing for import and export from production) was approximately 2,200 tonnes. Due to alternative investment tools such as foreign currency funds and savings deposits being very limited prior to 1984, savings were primarily held in the form of gold. In view of this historical stockpiling, it is considered that 5,000 tonnes is a reasonable estimate of the amount of gold currently being stored under mattresses. This is currently valued at approximately $US178 billion, which equates to approximately 22% of Turkey’s gross domestic product and 40% of the total cash deposits held in banks.

One of the most important problems for our country for many years has been an increase in the foreign trade deficit. Depending on how much gold is brought out from under mattresses, Turkey could move from being a country that imports gold to an exporter of gold. If just 1,250 tonnes of gold, representing 25% of the estimated 5,000 tonnes of gold held under mattresses, is brought into the economy, this would represent an injection of approximately $US45 billion, a value which exceeds our total current trade deficit.

The main role of the banks in the financial system is to serve as a bridge between the sectors with excess resources and those with insufficient resources. This role is important for the sustainable growth of the country’s economy. In order to ensure sustainable growth, investments have to be sustainable. Therefore, the manufacturing sector, which cannot carry out investment owing to insufficient funds, has to rely on the banks for its funding requirements.

This real increase in resources will be a very important tool for sustainable growth. In line with our growth target, the increase in the amount of credit required is around 15%. Developing countries have relied on resources transferred to them from the USA and Europe, having developed a policy in the growth of the money supply following the 2008 financial crisis. However, in the near future, it is expected that this policy will no longer be achievable due to changing market conditions and developments in global markets. In this scenario, if saving volumes continue to decrease for a number of years, the resource requirements of Turkey will increase. The physical gold collection project will provide increased resources for the country. The project should enable any gold physically held outside the formal-registered economy to move into the economy. This means that the collection of physical gold is not a transfer of resources, but an actual increase in resources.

In line with the gold collection marketing strategies of the banks, it will be possible to reach a wider audience who have previously only invested in gold and who are not bank customers and introduce them to the banking system.

This policy may open the door to more people who have previously had a limited relationship with banks to avail themselves of different banking products. As a result, individuals who have previously kept their savings outside of the financial system will be encouraged to participate in the system and, by doing so, make an important contribution to increasing financial literacy.

Evren Yasar is the Gold Banking Manager of the Istanbul Gold Refinery (IGR).

He began his career in Istanbul at the Kuveyt Turk Bank and for the next eight years worked in retail and small business banking, product development and marketing departments, before joining the IGR. His main responsibilities include managing the scrap gold collecting project in partnership with the banking sector and a range of other projects and gold banking products, such as ATM gold and gram gold. He gained a Bachelor’s degree in Economics and a Master’s Degree in Banking from the University of Instanbul.

He began his career at the Istanbul Grand Bazaar working in his family’s jewellery business. After completing his studies at University, he joined the Saat&Saat Group in 2004, an authorised distributor of watches and jewellery. In 2010 he joined the IGR and helped to set up the International Department which subsequently opened IGR branches in Germany, Spain and Dubai. He is responsible for managing a range of bullion trade related activities, the marketing of small bars and handling contracts with mining companies. He has a Bachelor of Arts in Business Administration.