Let it Flow Down the Long Grey Line

In a light-industrial district of Warwick, Rhode Island stands a long, low concrete building. It is much like the surrounding buildings, with shipping bays, offices with windows, numerous vents and a large chimney, but with a more spruced-up presentation than its neighbours (with actual spruces!) and a sign in front discreetly announcing its business: Pease & Curren Refiners. 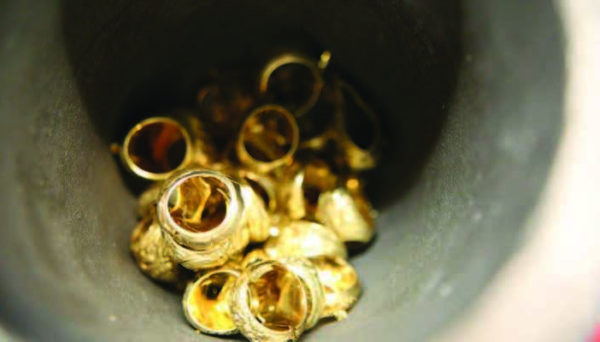 The 29 donated rings in the crucible

Pease & Curren has served jeweller y makers, pawn shops and dental laboratories since 1916. It receives jewellery, plate and scrap from its clients and refines these to extract gold, silver, platinum and palladium.

On 24 February 2014, Pease & Curren provided its refining ser vice in a different context, by hosting the 14th Annual United States Military Academy at West Point Class Ring Memorial Melt. Each year since 2000, West Point graduates and the families of deceased graduates have donated their gold class rings to be melted down and joined with a gold sample from which future class rings will be forged. So far, 356 rings had been donated. Because shavings from the ingots of each Ring Melt ceremony are included when forging the new rings each year, each new class gets gold from all the preceding years of the ring melt. The industrial process of turning solid gold into liquid and back again is a central part of the ceremony. 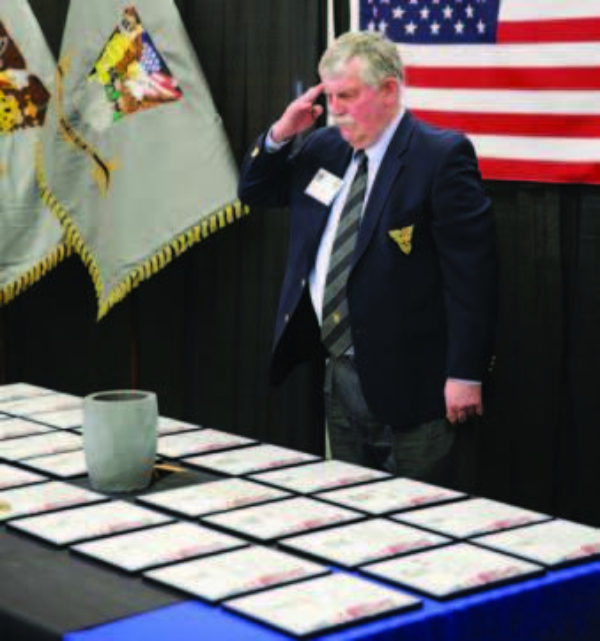 It is especially notable that this new tradition has been created by USMA graduates, since the custom of class rings, widespread among colleges and high schools in the United States, started at the USMA in 1835. The ring is typically worn on the right hand, with the insignia facing towards the wearer until graduation and then facing outward after wards. West Point graduates often wear their ring on the left hand in keeping with the idea that the left ring finger is connected to the heart.

About 50 people were in attendance, with several groups dominating: cadets from the class of 2015 (whose rings will contain the gold being melted today), members of the class of 1965 (the class from 50 years before are particularly encouraged to make donations) and family members of the ring donors. Lying flat on a table in front of the United States national flag were framed biographies of each of the 29 donors, with the donor’s ring placed at the top left-hand corner. In the centre of the table stood a grey crucible about 10 inches high, looking like a cross between an industrial object, tombstone and reliquary.

“Each time a ring was placed, someone gave a short address that brought together themes of body, time, kinship and gender bound up in this ritual of gold, fire and human lives.”

After a welcome from Kimberly Michalik, the president of Pease & Curren, the first part of the ceremony began. The cadets took turns reading the biographies of the 29 ring donors (all but three are deceased and the rings were donated by the families). If no family member was present, a designated classmate or other academy graduate placed the ring in the crucible. He (it is usually a he) saluted the ring and then returned to his seat in silence. When a female family member – a widow or daughter – placed the ring, she would kiss it before putting it in the crucible. Though I didn’t know anyone there, the ceremony felt solemn and weighted with respect.

Each time a ring was placed, someone gave a short address that brought together themes of body, time, kinship and gender bound up in this ritual of gold, fire and human lives. Here are some of the things people said as the rings were placed.

“I believe the ring was his most precious possession. It is that that is going to pass on his legacy.”

“As I look at these young faces, I think that even though it is difficult to relinquish something we saw on his hand, we are pleased to pay it forward, to pass his ring on down and let it flow down the long grey line [the continuum of cadets and graduates of the U.S. Military Academy at West Point].”

After the reading of the biographies and the placing of the rings, the class president gave a final speech before the melt.

He said: “How do we feel about today? Everyone has been looking at the Jostens catalogue [the company that makes the class rings] and it’s easy to get caught up in the different jewels, gems and diamonds – how can you have the flashiest ring in the room? But it’s so much more than a piece of jeweller y. It is a connection that honours the lives and the stories represented by this ring… By donating your rings, you are gripping hands with our class. We are humbled by your gift. We will never go our separate ways.” The cadets brought the crucible to the floor of the refiner y and everyone took photos as the crucible was placed in the forge, which is heated to 1,260 degrees Celsius.

As we waited, I talked with two widows about their decision to donate their husbands’ rings. Had their husbands known about the ring donation programme? They had not, but both wives were certain they would approve. What about the gemstone in the ring, which donors are asked to remove before donation? One planned to put it in a setting for a pendant; the other liked that idea.

The gold is then poured into an ingot mold and cooled in water. It weighs about 23 ounces. Once cooled, it is officially handed over to the representative from Jostens. He will drive it to the Jostens factor y and add it to the sample from which the next rings are forged. And so on down the long grey line.

“As we waited, I talked with two widows about their decision to donate their husbands’ rings. Had their husbands known about the ring donation programme? They had not, but both wives were certain they would approve.” 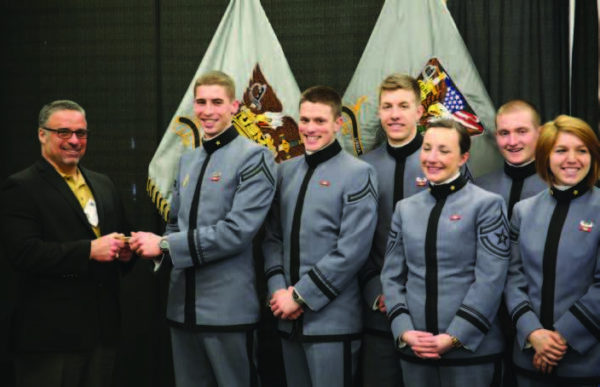 The Jostens representative holding the ingot with the cadets

It may seem odd that the graduates, or their families, would donate such a highly personal emblem of achievement to be melted down and mixed in with all the other donated rings. Not only will the donor or his or her family never see the ring again, but it will bear no physical trace of its former life as the mark of graduation from the United States Military Academy, a great honour and important milestone in personal and family history. That’s not to mention that, notwithstanding the recent fall in gold prices, a gold ring is still far more expensive in 2015 than it was in 2000 when the tradition began (the cumulative average London PM Fix for 2000 was $279.11). Why would donors or their families want to give away this important and valuable keepsake so that strangers could wear it on their fingers and pass it down their family lines?

The quotations above suggest the answer to this question. The class rings represent the connection to something bigger and more important than the individual person’s history or that of their biological family tree. And is not a connection that is forged lightly, but through the hard work of completing the demanding academic and physical training of West Point and serving as an officer in the United States Army. The ring itself is seen as a part of the wearer’s body, particularly the hand and heart (both of which signify emotional and physical connection), and as a substitute for the wearer’s whole body. Like the body, which breaks down after death and mixes into the earth, water and air, the donated ring is broken down into its elemental form and mixed back into the collective source. This, I believe, is what made the moment in the Ring Melt ceremony when the ring is placed in the crucible so moving, even for those of us who did not know its wearer.

Gold never goes away, and thus it is a fitting material to express at once the anguish of personal loss, and the comfort and higher purpose of social continuity.

Elizabeth Ferry is Professor of Anthropology at Brandeis University in Waltham, MA, USA.

She is the author of Not Ours Alone: Patrimony, Value, and Collectivity in Contemporary Mexico (Columbia University Press, 2005) and Minerals, Collecting, and Value across the U.S.-Mexican Border (Indiana University Press, 2013). In addition to publishing in numerous academic journals, she has also written for the magazine Mineralogical Record and the blog for the Committee on the Anthropology of Science, Technology, and Computing (www. blog.castac.org).