A Brief History of... the Physical Gold Market in the United States

Regulated and deregulated from 1933 to 1967, the US government-controlled the ownership and supply of nearly all gold bullion in the United States. Prior to 1974, private citizens were restricted to owning gold in the form of coins with mint dates on or before 1933. This was in marked contrast to the rest of the world, where individuals were allowed to own gold in any form they chose.

When US manufacturing companies needed to purchase gold bullion, they did so directly from the government at a fixed price of $35 per ounce.

In 1967, the government began to move towards deregulating gold. It did not totally relinquish its control on the market but decided to use a two-tier gold pricing system. It would continue to back the US dollar with gold at a fixed rate only with foreign central banks, and would no longer sell gold to manufacturing companies. The US Treasury would instead issue licenses to companies then able to sell gold to manufacturers at a free market price. This was when US bullion banks first began offering pricing and supply services to these companies.

The manufacturers had been used to knowing exactly what their gold would cost them and found floating prices a worrying concept. The price fluctuations involved would hardly impress anyone today, but during that time the slightest moves raised eyebrow s. Five cents difference between two PM fixings was enough to provoke concern, and fluctuation of 10 cents between two fixings could almost result in a panic. In order to keep its hand in, the government required that these newly licensed companies fill out an "End- Use" certificate for each shipment of gold, no matter what the size. The certificate had to be completed by the buyer, stating the end use of the gold, signed and return ed to the seller. Every six months, the seller was required to submit all certificates to the Treasury. Some buyers might purchase a small amount of gold every day so that, by the end of the six-months, the seller could be forced to submit 120 pieces of paper for that customer alone. Eventually, the government abandoned that scheme, although five years had passed before it did so. 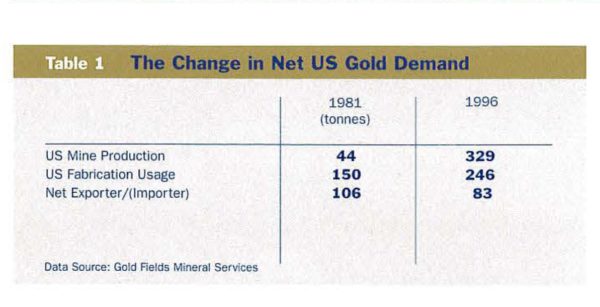 On 31 December 1974, the final piece of government control was removed when the ban on private ownership of gold was lifted. However, the government proved it could still control certain aspects of the market at the end of 1986 with the introduction of the Customs User Fee. The User Fee, a revenue-enhancing scheme, did not exclusively apply to gold, but to all imports of value. The importer had to pay the government 0.22% of the value of the goods, which on the face of it does not seem high. Gold, however, being of high value in a relatively compact form was the ideal target for the government tax. Several trailer loads of dresses worth S1million might take all afternoon to inspect, whereas the 80 bars contained in a 1-tonne shipment - worth approximately $16 million - could be inspected in less than an hour. The resulting surcharge on imported gold amounted to approximately 90 cents an ounce, thus changing the face of movements of physical material into and out of the US. Although the charge was gradually reduced to a small flat fee a few years later, it would still be possible for the government to re-impose it at any time that it is looking to raise funds inconspicuously again. 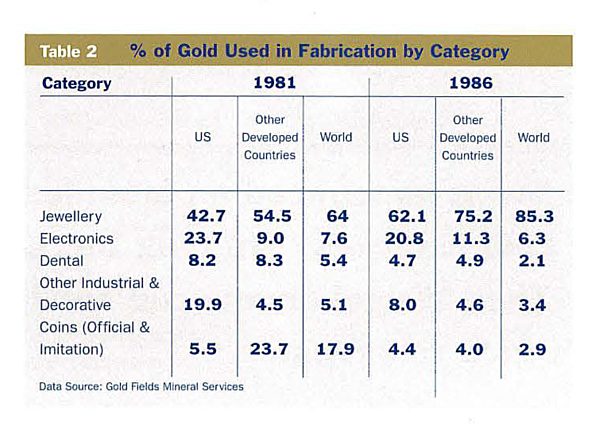 However, the LIS has had an ever-increasing amount of domestic gold supply. Mine production here has increased more than sevenfold in the last 15 years, bringing the LIS from the fourth-largest producer in the world d to second place. It is easily seen in Table 1 that the LIS has gone in that time from being a net major importer to a net major exporter of gold. Logically, supply for domestic needs should always be ample, but that does not mean that temporary shortages do not occur. A sharp decline in the price of gold may not affect LIS demand levels greatly in itself, the market here being more likely to respond to internal economic condition s and levels of disposable incomes, but it does affect other, more price-sensitive areas, notably Asia.

This expanded external demand results in higher levels of overseas shipments than normal and the ensuing temporary reduction in local supply can cause the premiums of some types of physical gold to increase substantially. This was the case seen last February when the gold price touched two-and-a-half-year lows and the local premium for .9999 gold - the fineness now normally used in fabrication - more than doubled at times.

Over the last 20 years, we have seen a gradual shift in the fineness of gold used in US fabrication. Whereas most gold refined and used for fabrication during the 1970s was .9995, improvements in refining techniques during the 1980s and 1990 resulted in most gold being refined to .9999 as a matter of course.

The premiums that refiners were able to get for .9999 over .9995 have all but disappeared. It was also during this time that more of the manufacturer's started changing their processes to accept a greater percentage of .9999 material, and now many will only take the higher purities as there is less chance of there being 'large' amounts of other trace elements contained in the metal. Also, more of the small- to mid-size companies, and even some larger ones, are now using grain (shot) as it is easier to dole out as needed and requires less melting time than the traditional 400-ounce bars.

Although over 60% of the gold fabrication demand in the LIS is now in jewellery production, it is still a smaller percentage than in the rest of the world. The LIS remains, however, the world 's second-largest consumer of gold jewellery (GFMS 1996 estimated demand: 317 tonnes) by importing almost as much jewellery as it fabricates. Dental use and coinage are currently running about the same for the LIS as the rest of the world, but the LIS produces a far greater share of its fabrication in electronics and other industrial uses than do even other developed co countries. Since electronics and other industrial manufacturers have less tolerance for impurities than most other types of fabricators, they usually demand higher purities of go l d and more accountability for the impurities.

High-tech firms are beginning to inquire more about the availability of .99995 material, and it appears that this will become more in demand as the applications become a more sensitive to impurities. Currently, .9 9995 material carries a hefty price premium, but it should be only a matter of time before refiners start routinely turning out material in these higher purities for decreasing premiums to maximize their income from operations.

Another development that has become more in vogue with many companies in the US is the ' voluntary' compliance with the ISO series of standards (3000, 9000, 9002, etc.) as regulated by the International Organisation for Standard­isation. These standards, mostly used in Europe, are a registration process where a company's procedures are documented and reviewed, and audits made to ensure compliance with these procedures, and that they comply with certain requirements. The number of electronic, dental, jewellery and other manufacturers that are complying with these, and are requesting such certification of the metal they receive, is growing rapidly. Although the fineness of the gold bullion is the major concern of these standards at this time, the make-up of the impurities will become more important. Within a few years, refiners will probably have to furnish documents certifying that they are ISO compliant with each shipment of metal that they make. Thus, there will be more demands put on refiners and intermediaries to continually upgrade the products being offered to the end-users.

Fleet Precious Metals Inc. is a subsidiary of Fleet National Bank (formerly known as Industrial National Bank of Rf) which is one of the oldest banks in the US and is part of the Fleet Financial Group, were the 11th largest banking group in the US. Fleet was one of the first companies to 9et a Treasury license to deal in 90/d and entered the precious metals business in late 1974. Since then, Fleet Precious Metals has grown into one of the largest lenders of precious metals to the end-users (jewellery, electronics, dental, refining and other manufacturing) in the US, and uses all the financial products that are necessary for these companies to hedge their precious metal’s needs. Currently, Fleet uses these services in gold, silver, platinum, palladium and copper, and has over SO people who are dedicated to helpin9 companies in the metals industry.

Robert G. Arcand joined Fleet in 1982 as Head of the Operations Section in the Precious Metals Group. He moved into the trading area in 1984 and has been Chief Dealer for Fleet Precious Metals since 1992. Bob started working with precious metals in 1970 in the vault at another major bullion bank and moved up through the ranks to manage the precious metals operations before entering the trading area there. He has presumed a paper for the IPMI and has been both Secretary and President of the New England Chapter of the IPMI and has served on its Board for 13 years.