About three and a half billion people - roughly three­ quarters of the entire world population - own some gold, in one form or another. Last year alone, an estimated 700 million people around the world bought gold. That represents one in seven of the world's population. What this article will do is examine what lies behind those numbers, in terms of facts and feelings, and take an in-depth look at developments in a few interesting regions during 1996 and the first quarter of 1997, as well as offer a glimpse into the future. 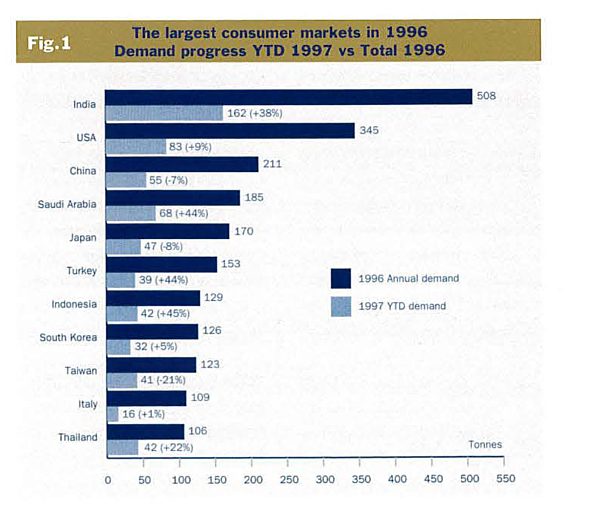 Total gold demand in the markets served by the World Gold Council during 1996 was slightly below the record level of 2,795.7 tonnes set in 1995, as investment demand returned to more normal levels after an exceptional performance the year before. However, the demand for gold jewellery during 1996 reached an annual record high.

The first quarter of 1 997 proved a truly outstanding one for gold demand by several measures. Demand in the markets served by the World Gold Council reached the highest level ever seen for any quarter on record. The year-on-year increase of 17% was one of the largest ever recorded, thanks to increases in both jewellery and investment demand, which posted a 20% increase after four consecutive quarters of decline.

This increase becomes all the more remarkable when it is noted that, in some areas, the gold price measured in local currency did not decline as the dollar-based price did, meaning that the increase could not be exclusively attributed to "bargain-hunting". The Market Weighted Gold Price Index, shown in Figure 2, compares how a basket of various local-currency gold prices in key consumption markets has moved relative to the US gold price. The index starts at 100 at the end of 1995 and weights the local currency price in WGC monitored markets by each country's share of demand. While the gold price in dollar terms gradually slipped from its February 1996 peak of $414.80, the Market Weighted Index continued to rise throughout 1996. It dipped marginally in QI I997 but remains significantly above the LISS price index, indicating that local gold prices in many markets have remained relatively high, despite a decline in the LIS gold price. 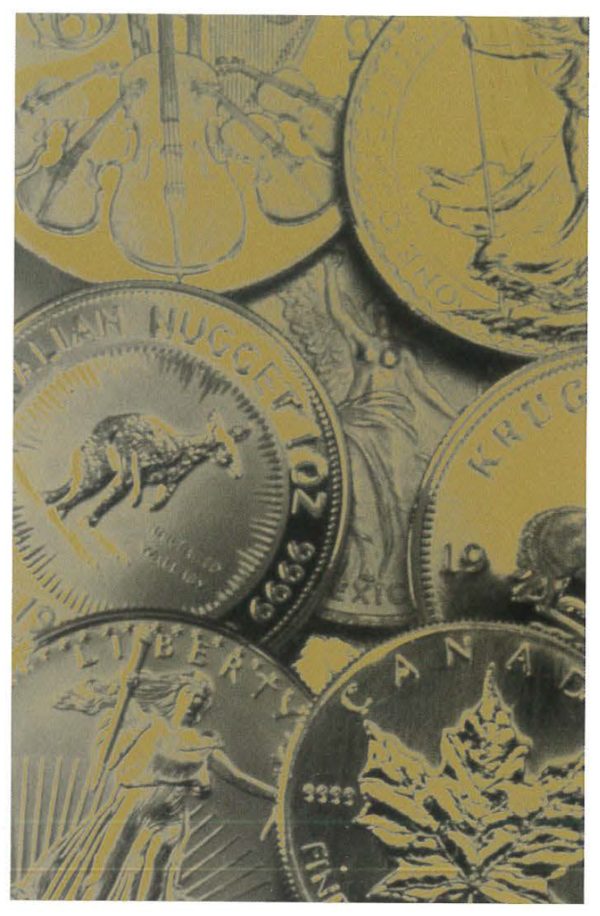 During 1996, full-year demand in the developing markets rose 1% to a new annual record of 1,825 tonnes, the second year in which demand held relatively steady. The first quarter of 1997 showed a much more dramatic rate of growth as overall demand jumped 22% from the first quarter of 1996 to a total of 586.8 tonnes, the most seen so far in any one quarter. India, South East Asia, South Korea, Turkey, Saudi Arabia and the Gulf States all posted strong gains. Following is a closer look at what influences drove the developments in some of these countries.

India, the largest consumer of gold in the world, achieved a new annual record during 1996, and demand continued to expand there in the first quarter of 1997. The gold price fell in rupee terms and last year 's improved economic environment carried over into the wedding and festival season in January and February. The result was a 38% increase over the previous year's first quarter to 161.7 tonnes, breaking the previous quarterly record seen at the beginning of 1993.

India has been gradually liberalising the trade in gold for several years now by starting to lift the severe restrictions that had been in place since the country gained its independence from British rule 50 years ago, a process which accelerated following the WGC­ sponsored Delhi Gold Economic Conference in November 1996. Import allowances for non-resident Indians, the primary source of supply, have doubled, and more liberal policy on gold imports for the jewellery export trade is in place for the period from 1997 to 2002. Further reform is on the way.

Gold demand in China remains soft, showing a small decline during 1996 and falling 7% during the first quarter of 1997. While overall retail sales in China have risen this year so far, gold jewellery lags behind, still held back by the fact that gold can only be sold officially by state-owned retailers, of which there are only about 8,000 in the whole country. This equates to one per 150,000 people, compared with Hong Kong at one store per 7,000 inhabitants, Taiwan at one per 6,000 and India at one per 4,000. The People's Bank of China reduced the domestic gold price with effect from the beginning of the year, but the lower prices have not yet had a positive impact on demand.

Demand in the Gulf States increased by 17 % during the first quarter of 1997, with good gains in both jewellery and investment. In the United Arab Emirates, demand was stimulated by a combination of good buying at the close of Ramadan, lower gold prices, and the start of the Dubai Shopping Festival 1997, an annual event.

A campaign run during the festival promoted Dubai as the "City of Gold", a slogan which could be found on everything from bumper stickers to balloons. The local jewellery traders sponsored an unusual - and highly successful - gold raffle. Every visitor to the month-long festival who spent a minimum of 500 dirhams (about S130) on gold jewellery received a ticket for a daily raffle, the prize of which was 1 kilogram of gold. At the end of the month, all the tickets sold - weighing half a tonne - were put into a special drum for the final drawing of a prize of 10 kilos. 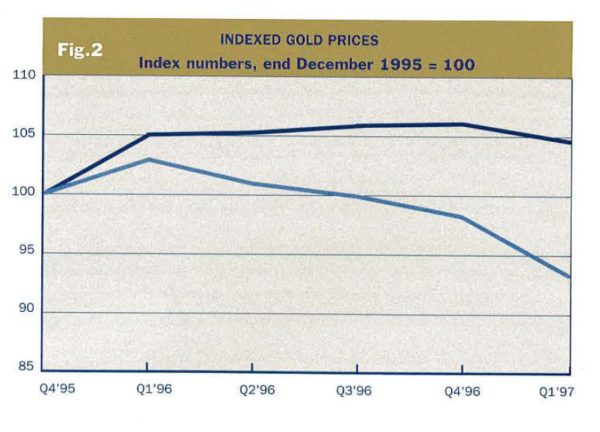 Gold demand in developed markets remained relatively flat during the first quarter of 1997, rising only 2% from the previous year. Jeweller y consumption in the US grew for the sixth consecutive year, and investment demand there for bullion coins moved sharply higher, largely in response to the lower gold price. However, those gains were offset by the situation in Japan, where gold investment demand recovered somewhat from the weak 1996 levels, but jewellery consumption continues weak, coming under increased pressure from gem-set and platinum items.

Trends in gold demand - the impact of jewellery consumption

This section takes a look at the world of gold from the consumer perspective - which factors motivated those 700 million people who bought gold last year. The World Gold Council conducts annual research surveys, alternating each year between developed and developing markets to determine "who buys what, when, where and why".

Turning to develop markets first, conventional wisdom has it that these are price-driven, two-way markets for gold and that the real motivation lying behind consumer purchases is essentially a financial one, with consumers wanting to "buy low, sell high".

Our research tells another story. For a start, 90% of consumer demand for physical gold in the developing markets is in the form of jewellery, with bars and coins accounting for only around 10%.

The primary motivating factor for a consumer purchasing jewellery is one of adornment: two-thirds of consumers in the developing world agree with the statement that “gold jewellery is an important part of a woman's total look", while less than half agree that "gold jewellery's investment potential is more important than its beauty."

Turning now to developed markets, the consumer research shows that gold jewellery purchases are almost exclusively by or for women - and are, of course, linked to adornment, with gold seen as relatively accessible luxury. Two-thirds of all women in developed markets claim to "love real gold jewellery" and say they wear it for their own personal pleasure. Fully one-third of all-American women agree with the statement," I never feel properly dressed unless I am wearing my gold jewellery." In addition, they agree that it has sentimental value and brings back personal memories. Needless to say, with attitudes like that, the selling back of gold jewellery is not an issue.

Furthermore, in developed markets, our research shows that there is a certain degree of gold "addiction": women who already own the most gold continue purchasing more items of increasing value. In the case of the United States, there are about 25 million such as gold­ addicted women. Three-quarters of them bought gold last year, and almost half of them purchased on impulse. And while most of these women are., as expect ed. older, middle class, professional, educated women with comfortable lifestyles, there are another 11 million younger women looking set to follow.

With all of these factors in mind, I am confident that the demand for gold jewellery accounting for four-fifths of all demand - will continue to grow. During the 1990s, while mine production has grown by an average annual rate of 1.3%, jewellery consumption has expanded by an average annual rate of around 4%. I believe the developing markets will go on setting the pace, but that many of the developed markets will not be far behind. 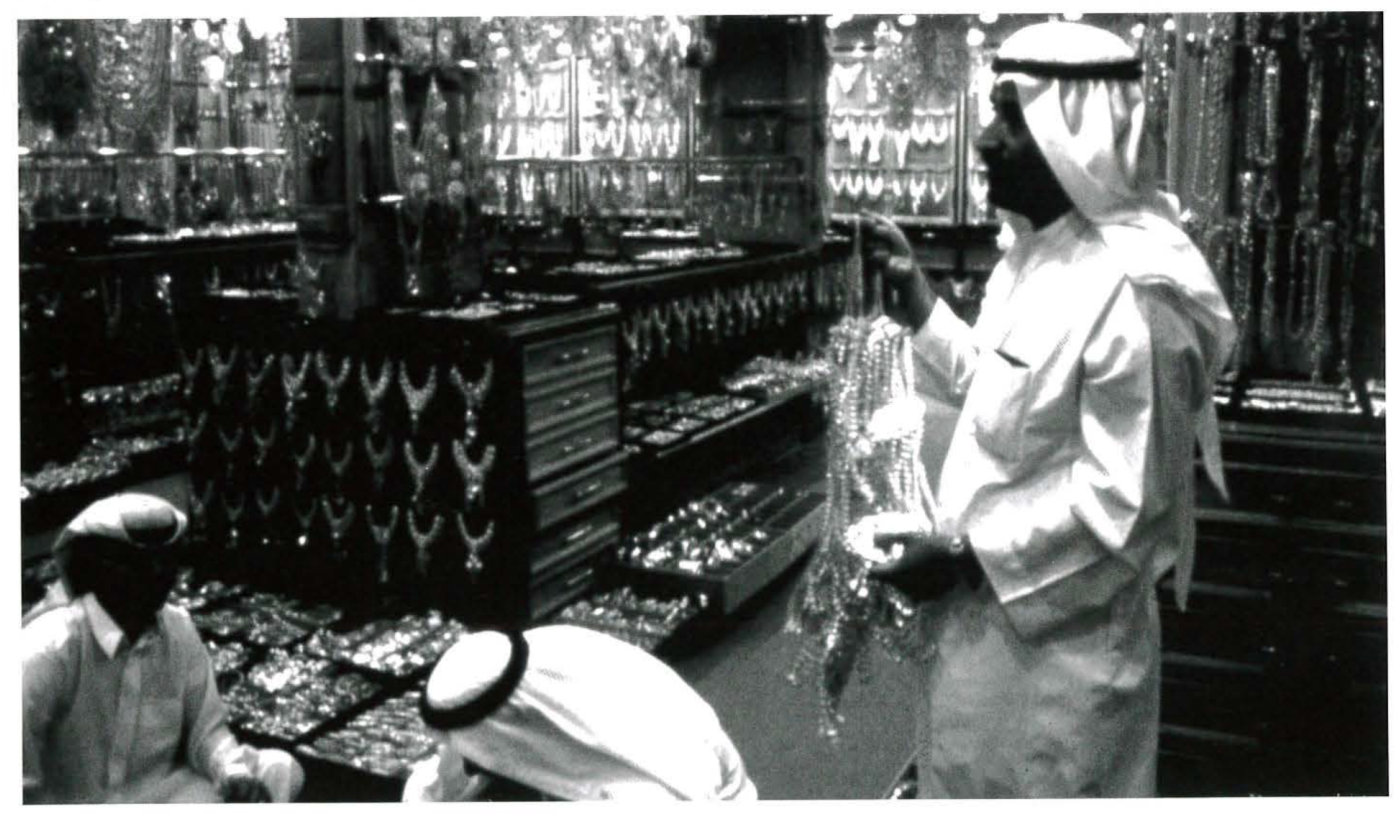