Which is Inflated, China’s Demand or China’s Influence?

This is a transcription of the speech delivered by Jiang Shu at the LBMA/LPPM Conference in Vienna, 18 - 20 October. Let us look at China’s demand versus the gold price in Chart 1 below. From 2000 to 2011, we can see a strong positive correlation between China’s annual consumer demand and the gold price. 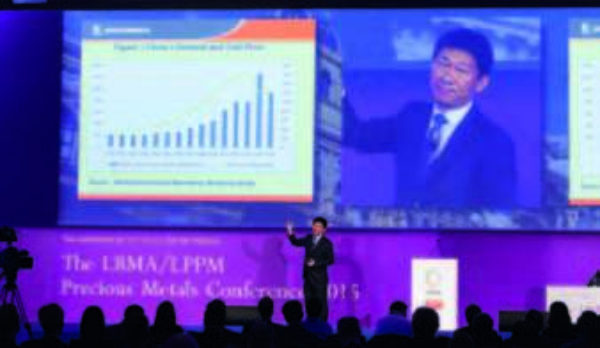 Such a strong positive correlation made many people believe that as long as China’s gold demand went up, there would always be a bullish gold market.

Some analysts think that China’s gold demand has been inflated during the past three years, and they point out two possible sources. One is large-scale commodity financing deals, which use the imports and exports of gold to gain the spread between the US dollar’s low interest rate and the RMB’s high interest rate and the RMB’s appreciation, just as happened in copper and iron ore. The other is goal-leasing transactions between gold-related enterprises and Chinese commercial banks, which keep a large portion of gold from real demand.

The following two measures seem to confirm the above conclusion. Let us first look at net exports of gold from Hong Kong to China’s mainland versus the RMB exchange rate, as illustrated over the page in Chart 2. We can see that there had also been strong positive correlation between the RMB’s appreciation and net exports from Hong Kong to China’s mainland. 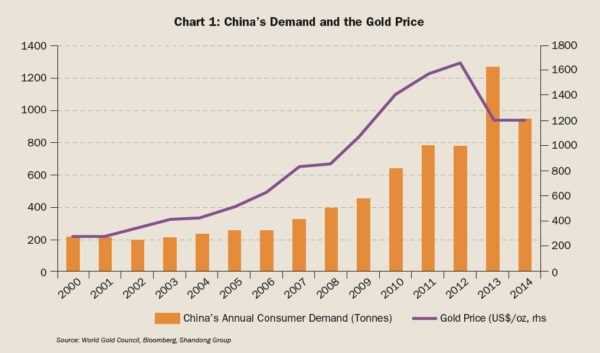 Chinese gold-financing dues are thought by some analysts and investment banks to be processed in the following four steps:

However, in China, the importing process is different for gold than for copper and iron ore. For general trade, around 15 domestic and foreign banks enjoy a People’s Bank of China (PBOC), China’s central bank, licence to import gold. A few large jewellery companies also have a gold trade licence for general trade, but this is insignificant. In China’s international gold trade, onshore gold manufacturers are not big players, as is thought by some investment banks and international analysts, but China’s commercial banks are.

“With the rapid growth of China’s gold-leasing transactions, can China’s gold- leasing business lock so much gold that China’s demand is inflated?” 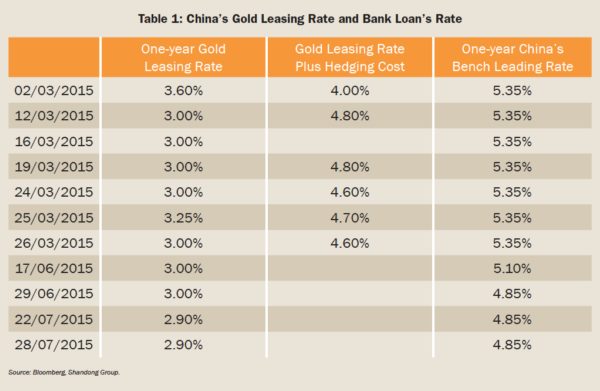 Can China’s commercial banks do some gold- financing deals to gain the arbitrage profits from their domestic and overseas branches? The answer is no. Why? Because all bullion imported through general trade is required to be sold first through the Shanghai Gold Exchange (SGE). Consequently, all gold flowing through the SGE is prohibited from being exported, so the importing process for gold is different from copper and iron ore. Most net exports of gold from Hong Kong to China’s mainland are not the result of arbitrage based on the RMB’s high interest rate and appreciation.

When gold-related enterprises get gold, they will sell gold through the SGE immediately and, at the same time, buy futures or forwards to hedge price risk for when they would buy gold back and return it to banks in the future. Therefore, in China’s gold-leasing business, what gold- related enterprises really care about is not gold itself but relatively cheap money. 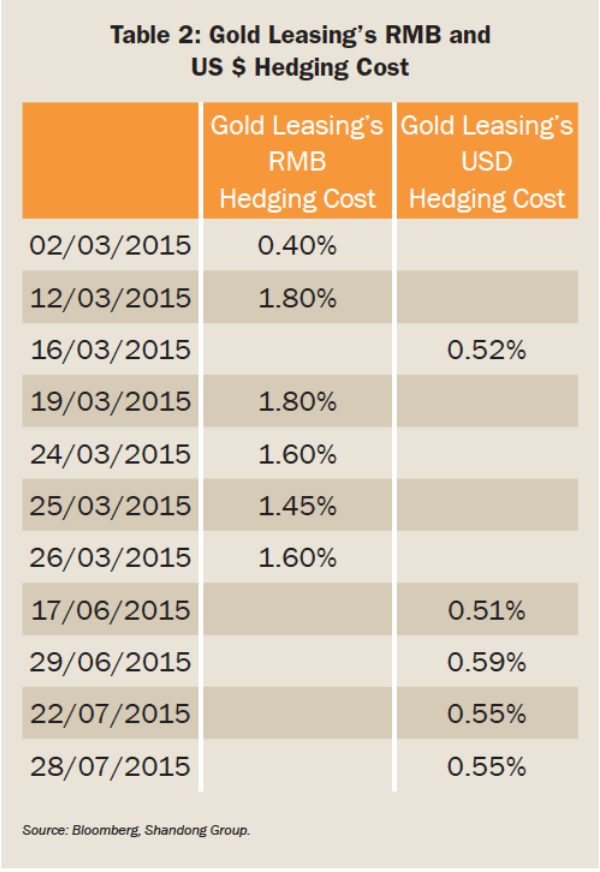 Gold-leasing in China has become a standardised loan-like product of banks. Just like the effective money multiplier in macroeconomics, China’s 1,371 tonne gold- leasing volume needed much less gold. The gold-leasing business does not keep a large portion of gold from China’s real demand.

In my opinion, China’s gold demand is not inflated by the assumed gold-financing dues and gold- leasing transactions. Then how can we explain the weakened positive correlation between China’s demand and the gold price? From my point of view, the answer comes not from the inflation of China’s demand, but from the inflation of China’s influence. Although China’s demand has a strong influence on the gold price, to most of China’s gold investors and market participants, China’s demand has not replaced the US dollar as the gold price’s number one driving force. It is interesting to note that when international investors met Chinese investors, the international investors were eager to gather information or even gossip about China’s jewellery demand and China’s gold reserve movement. At the same time, China’s investors were anxious to know how the US economy was and when the Fed would raise the interest rate.

We have collected 588 titles from gold analysis reports or articles from a very popular Chinese financial website, Hexun, from the beginning of 2015 to 6 September. Among these 588 titles, only 28 titles mention China as the gold price’s driving force, which represented only 4.76% of the whole sample, while 373 titles associated the US dollar and US things with gold price volatility, which represented 63.43% of the whole sample. To most of China’s gold investors and market participants, the influence of China’s demand on the gold price is even smaller than that of the Greek crisis. Of this figure, nearly 50% mentioned Greece. At the same time, less than 5% mentioned China.

Perhaps someone would say that China’s demand was not determined by analysts’ thoughts, but by China’s Dama’s actions. China’s ladies in their 50s and 60s are thought to have a strong appetite for gold jewellery and investment gold bars, and even the international news media coined the phrase ‘China’s Dama’ to emphasise China’s importance. Let us look at the quarterly change in China’s consumer demand versus the gold price in Table 3. When we closely examine this, we will see that, in 2013, although there was a gold buying spree in China, it was the gold price that moved first, and China’s Dama just rushed to follow the downward trend, to gain the benefits like ‘on sale’ in the supermarket.

In summary, I think that China’s demand has not replaced the US dollar as the number one gold price driving force. Generally, China’s gold demand is not inflated, as some international investors and analysts thought.