The Interplay Between US Interest Rates and Gold

The commencement of the monetary tightening phase by the US Federal Reserve in December did little to sooth debate about the implications of rising US rates on the future price of gold. On the one hand, many market commentators argue that gold – a zero-yield asset – will inevitably lose its shine when interest rates climb as this makes it less competitive versus cash and other interest-bearing assets. Against this, a wide group of market observers state that this economic cliché does not hold well for gold based on statistical analysis of historical data.

This paper analyses gold’s behaviour during previous cycles when US interest rates increased and offers Alchemist’s readers CRU’s view on gold’s future price trajectory. Our definition of the rate-hike cycle includes three or more consecutive increases in the federal funds rate with no intervening cuts.

There were seven episodes that meet our criteria in the period between January 1971 and December 2008 when the Fed last cut the rate from 2% to 0.25%. At first glance, these appear to favour the bulls, since gold rallied through five of these cycles and dropped through only two. Furthermore, average price gains through the periods when gold rallied significantly exceeded losses when it failed to do so – 133% versus 7% per each cycle. This does indeed suggest that gold is not only very resilient to rate hikes but can often thrive in such environments.

However, gold is a very complex market and, although broad relationships are always useful pointers when performing market research, searching for one ultimate factor determining gold’s price, akin to alchemy, will always result in failure. In most of our highlighted periods, other factors in addition to changes in the Fed’s interest rate policy have played a significant role in price determination (see chart 1).

For example, between 1971 and mid-1974, and again between 1976 and 1980, the increase in interest rates was a response to rampant inflation. These are the two rate-hike cycles included in our analysis when gold rocketed the most. However, gold’s performance then was almost entirely due to its perceived status as a hedge against inflation.

Admittedly, the same was not true during the last cycle, from mid-2004 to mid-2007, when, albeit not as dramatically as in the 1970s, gold also demonstrated solid growth. However, this was the period when the housing bubble in the USA began to pop, wreaking havoc on its economy and sparking demand for safe-haven assets such as gold. In addition, the start of liberalisation of China’s gold market and the introduction of gold ETFs in 2003 played an important role in gold’s advance during that period. The availability of ETFs encouraged a transfer of investment funds from proxy instruments (such as shares in gold mining companies) to the gold market itself, and direct investment in gold rose in both Asia and the OECD.

We can get some idea of where nominal rates might be heading by looking at market data. According to the latest ‘dot plot’, a part of the FOMC’s Summary of Economic Projections released along with its policy decision statement, underlying interest rates are unlikely to exceed 3% by the end of 2018 (see chart 2). Although such a rate- hike cycle would be less extreme than the last one, when the rate was increased by 5% in three years, it is likely to be bearish for gold, in our view.

Instead of being largely reactive, as was the case during previous cycles, it looks like the Fed will try to act in a proactive manner this time and get ahead of the curve by raising interest rates before inflation gets out of control. Importantly, such a move will boost interest rates in real terms, making other financial assets potentially more attractive for investors than gold.

“The start of liberalisation of China’s gold market and the introduction of gold ETFs in 2003 played an important role in gold’s advance during that period.” 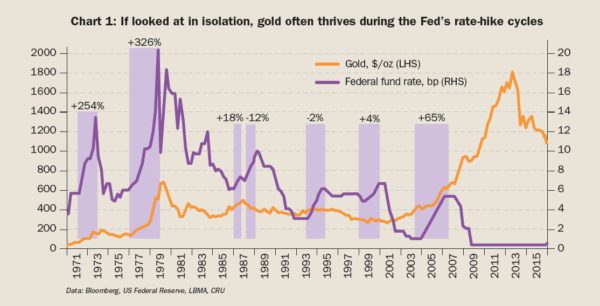 As investors’ appetite for riskier and higher- yielding assets improves, CRU in fact expects demand for gold to wane, resulting in softer prices over the next few years. Having said this, the pace of annual declines is likely to be gradual, due to robust Asian demand for physical gold and an only gradual interest rate normalisation. Indeed, higher interest rates might generate considerable headwinds for the US economy in the form of tighter credit availability for businesses and consumers, and higher interest payments on government debt, which in turn may push the fiscal deficit higher and send the national debt spiralling out of control. As such, the Fed is likely to be very delicate and exercise a cautious approach in hiking interest rates (unless inflationary pressures intensify dramatically and force it to act more aggressively), mindful of the risk of damaging the economic recovery in the USA.

“The Fed is likely to be very delicate and exercise a cautious approach in hiking interest rates.” 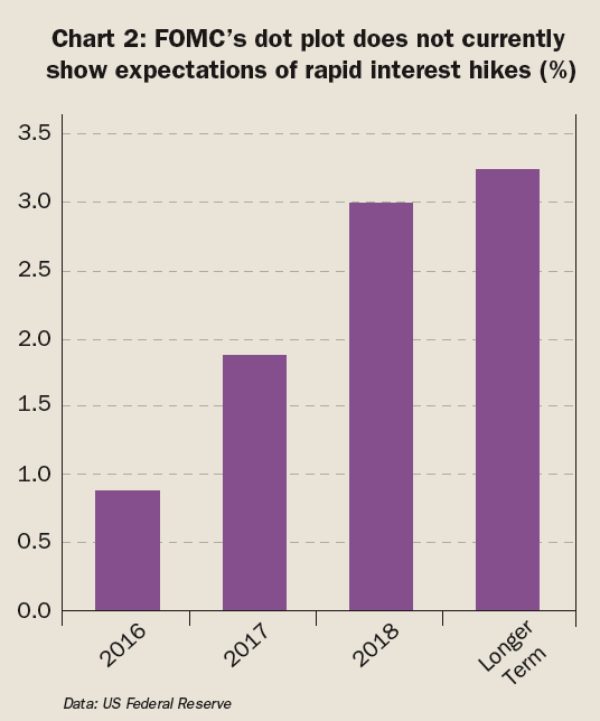 So far, our comments have focused on US interest rates and largely ignored other countries. This is not entirely unreasonable given the impact the US rates have on emerging markets as well as other regions of the world. However, the USA is currently the only major economy where interest rates are expected to rise in the next year or so. In contrast, interest rates in major gold-consuming nations are still heading in the opposite direction.

These divergent paths of monetary policy could provide a degree of support to gold demand. Indeed, although increasing US rates could support the dollar and apply some downward pressure on the gold price denominated in US dollar terms, declining rates elsewhere are likely to make gold more attractive to both investors and consumers.

In addition, there is always a chance that some other factors will come into play down the road and trigger strong gold buying, thus reducing or perhaps fully offsetting the impact from higher rates and tighter monetary policy in the USA.

One such possibility is another emerging market crisis which could erupt if these countries struggle to service their debt denominated in US dollars as the Fed continues to raise its rates.

On balance, however, CRU does not expect gold to retain its shine and become markedly more popular as an investment during 2016 and beyond. The fact that US Fed officials now expect rates to rise only twice this year compared with the four hikes projected back in December does not change our mildly bearish stance on gold over the medium to long term. After all, the Fed is still committed to incrementally tightening its monetary policy, and each new step in this direction will likely spark a sell-off in gold, limiting its upside.

Meanwhile, gold’s anti-inflation credentials have largely remained underutilised. With inflation in China remaining soft and European markets more concerned about deflation than price increases, it may be that concerns about global inflation were either exaggerated or premature. The impact of weak oil prices is lowering inflationary expectations too, and so this is another negative factor for gold. Indeed, unlike in the past, accelerating inflation in the USA may now actually be bearish for gold, since higher gains in this measure could force the Fed’s hand into raising interest rates faster than the financial markets currently have priced in.

Of course, gold’s safe-haven credentials should not be forgotten. It is well known that gold tends to benefit from all sorts of extreme negative market shocks. The start of 2016 has provided a good illustration as it was littered with events that burnished gold’s safe-haven appeal, resulting in the price surge to multi- month highs. These included a pick-up in Middle East tensions, the sharp sell-off in China’s equity markets, another nuclear test by North Korea and terrorist attacks in Europe.

However, as market volatility sparked by these events has begun to subside, it is becoming increasingly obvious that safe-haven demand was the key reason behind gold’s surge earlier this year. And the effect on gold prices from these events is always fairly short and rarely exceeds several months. As such, motivation to seek out gold as a safe-haven whenever things are going pear-shaped should not alone be viewed as a solid foundation for any bull market, barring a conflict on a global scale. If taken out of the market equation, as was the case in early 2014 and 2015, gold will soon start losing its vigour.

“It is becoming increasingly obvious that safe-haven demand was the key reason behind gold’s surge earlier this year.”

For the bull market in gold to return longer term, it is crucial to find a new major driver that would not only give price a bullish impetus, but then also help sustain upwards momentum not just for days or months, but for many years. However, we do not see any compelling candidate for this role at the moment. In fact, gold bears have more fundamental reasons for selling this metal. The risks of a global meltdown are now lower than they were a couple of years ago, the euro is surviving for now, macroeconomic indicators point to a steady, if slow, recovery in the US economy, and stock markets are repairing losses incurred during the jittery start to this year.