What Has Aluminium Got To Do With Gold? Throwing Some Light on Leasing in China

Why did China’s state-owned alumina and aluminium giant, Aluminum Corporation of China (Chinalco), borrow more than 10 tonnes of gold from a commercial bank in June? The deal illustrates the highly evolved nature of China’s gold lease market, as well as the challenges facing more traditional gold leasing and the constriction of other credit channels. 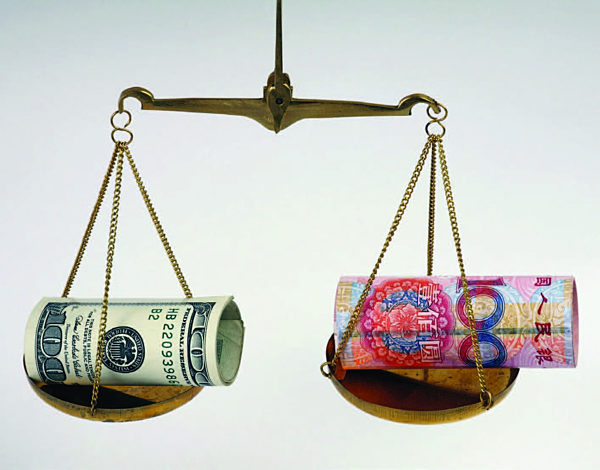 External observers often underestimate the financial sophistication of the Chinese domestic gold market. There still appears to be a perception in some quarters that China remains largely a physical bullion market, dominated by the jewellery manufacturing sector and by retail- level investment in small bars, coins and gifts. There is also an understandable tendency to try to find simple explanations for movements of bullion (whether trade flows or exchange volumes) when in reality a multitude of financial forces are at work.

Jewellery and retail investment demand for bullion is clearly a large component of the Chinese market, but its importance should not overshadow gold’s function as a mechanism for arbitraging interest rates and the rapid growth in the use of the metal as a financing vehicle.

Gold’s utility as a conduit for carry trades is relatively well understood. Several years ago, the arbitrage in borrowing gold offshore, importing it into China, using the gold to raise RMB and investing the proceeds in high- yielding wealth management products (often linked to property or commodity producers) was highly profitable. In many respects, that trade was tacitly encouraged by government and the People’s Bank of China (PBOC), as the use of gold to link onshore and offshore interest rate and FX markets is integral to the RMB internationalisation strategy.

Today, however, those opportunities are less lucrative, and not just because Chinese interest rates have fallen to narrow the gap with US dollar rates. At the same time, the collapse in commodity prices and a sharp fall in Chinese property prices have cut returns from many wealth management products; tightening regulation has increased costs and higher FX volatility has made hedging currency risk more expensive.

“There still appears to be a perception in some quarters that China remains largely a physical bullion market, dominated by the jewellery manufacturing sector and by retail-level investment in small bars, coins and gifts.” 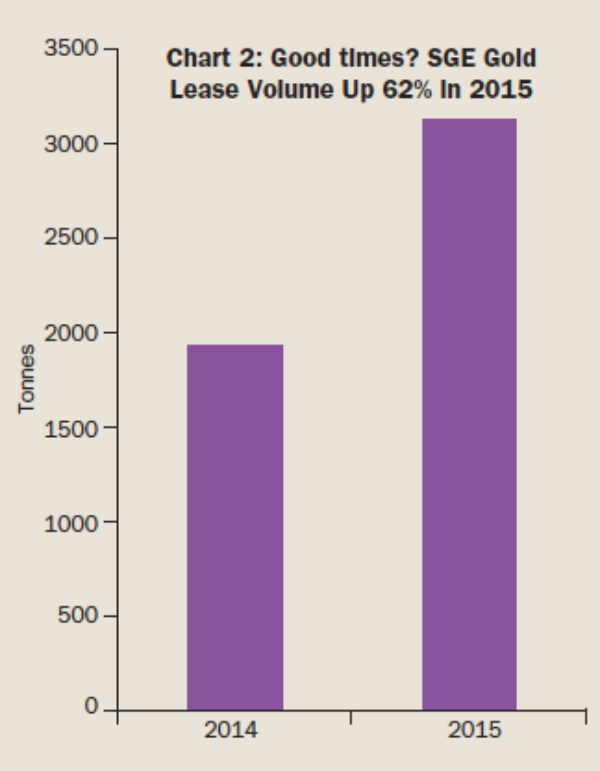 What of the onshore gold leasing arena, which has also gone through several stages of evolution?

As in London, the core of the Chinese gold- leasing business is the interbank market. What started in 2005 as small OTC trades between banks has grown into a deep pool of liquidity, accessible by banks and other financial institutions via the Shanghai Gold Exchange (SGE) members, the tenors from overnight borrowing out to 12 months or more.

Demand for leasing from gold refiners, fabricators and businesses across the jewellery chain followed close on the heels of the development of the interbank market. The rapid appreciation in the price of gold between 2007 and 2012 saw demand for borrowing from fabricators and jewellers surge as the value of their working capital climbed. Indeed, the pace of growth was one of the factors in the relaxation of gold import restrictions in 2011. With net jewellery consumption of gold in the region of 550 to 650 tonnes, and the volume of gold in working inventories a multiple of that, the emergence of a vibrant leasing market was a natural development.

Today, the SGE clears all official gold leases. In 2015, the total volume of metal leased via the exchange exceeded 3,100 tonnes, up 62% on 2014 and more than 15 times the size of the market just six years earlier. The primary influence on leasing growth, however, has shifted away from the jewellery sector, so that the dynamics are now more reflective of developments and challenges in the domestic credit environment. 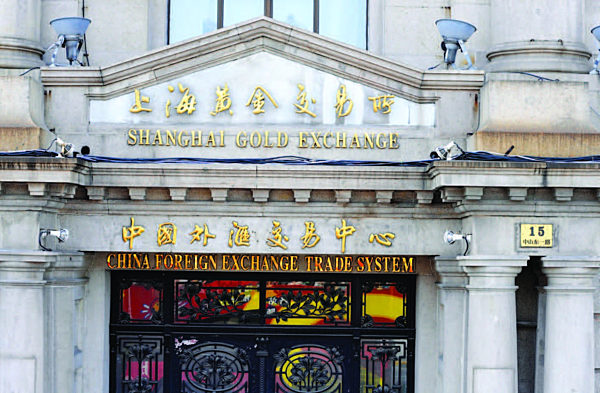 The pace of expansion of the China jewellery industry has slowed markedly over the past two years. Falling same-store sales growth, shortening supply chains and a much-reduced rate of new store openings have led directly to slower growth in demand for gold leases to manage working capital. At the same time, the declining credit quality of many smaller companies associated with jewellery fabrication has made lenders far more cautious.

But Chinese investment bankers are just as innovative as those in Singapore, London or New York, and their motivations are largely the same. Therefore, as the conventional lease market has neared saturation and credit risks in the jewellery sector have risen, attention has focused on extending the boundaries of leasing into other sectors of the economy.

That has been facilitated by a relaxation in the rules governing the types of entities eligible to apply for gold-based funding. Banks still need approval from the SGE for commercial leases, there are rules governing the minimum capital and financial ratios of lessees, and the PBOC (as regulator of the SGE) keeps a close watch on the sector. However, there is no limitation on the type of corporation that can apply for a lease.

In effect, what the slowing Chinese economy has taken from the gold lease market with one hand, it has started to give back with the other. More restrictive lending criteria and shrinking profit margins for companies across industrial and manufacturing sectors of the economy have fed into increased demand for gold leases as an alternative, lower-cost source of finance, offsetting reduced appetite from the traditional lease market. Enter Chinalco as a good illustration of that trend.

In June, Chinalco announced that it had entered a 12-month RMB3 billion gold leasing agreement with China’s Bank of Communications (BOCOM). Under the deal, Chinalco borrowed more than 10 tonnes of gold from BOCOM and entered a fixed price forward to hedge the price risk. The deal enabled Chinalco to reduce its working capital costs – the all-in cost of the lease plus hedge and transaction fees was capped below the PBOC’s benchmark 1-year lending rate of 4.35%.

“In effect, what the slowing Chinese economy has taken from the gold lease market with one hand, it has started to give back with the other.”

The advantages from the lessee’s perspective are clear. From the perspective of gold lessors, however, the business has become significantly more challenging as Chinese benchmark lending rates have fallen. The 1-year lending rate has been cut by 165 basis points since Q4 2014, narrowing the funding advantage of gold versus cash and cutting margins for banks. Increased volatility in CNY and the 10% depreciation in the currency over the past two and a half years have further eaten into the profitability of borrowing gold offshore in US dollars and leasing it onshore. Banks are, of course, also well aware that swapping one funding mechanism (a loan) for another (a gold lease) does not reduce the counterparty risk.

Lease market set to contract in 2016?

In the decade following the first gold leasing deals, the market has expanded rapidly from purely interbank trade, through the gold refining and fabricating sectors, to other parts of the economy unconnected with the production or consumption of the metal.

Now, more than anywhere else, gold is widely used in China as a means of raising short-term liquidity and has become an alternative source of credit to both Chinese SOEs and SMEs. This progression is broadly consistent with the ambitions of policymakers and exchanges to make the most of the financial characteristics of gold, but the pace of growth may well have surpassed their expectations. The question is now whether reduced demand for gold leases from the jewellery sector, and narrower profit margins for banks on their gold leasing business in general, will result in a fall in leased volumes this year. The answer is quite possibly, and that would be consistent with the slower pace of Chinese gold imports during the first half of 2016.

However, the ancillary hedging and trading business that flows from gold leasing are added sources of fees and revenues. Importantly, gold leases can also be eligible for advantageous accounting treatment versus traditional forms of credit. In addition, at a time when physical demand from the jewellery sector has slackened, development of gold leasing business can help Chinese banks fulfil their import quotas.

“The question is now whether reduced demand for gold leases from the jewellery sector, and narrower profit margins for banks on their gold leasing business in general, will result in a fall in leased volumes this year.”

China’s gold lease market has grown to become the world’s largest, most liquid and most diversified in the space of just 10 years. The forces interacting on lease demand and supply are complex, but one thing is clear - we can expect additional innovation in the use of gold as a financing tool as China moves to further open its capital markets.

Tom Kendall is Head of Precious Metals Strategy at ICBC Standard Bank Plc. He joined the bank in June 2015 from an independent options brokerage, LCM Metals UK LLP, where he was responsible for metals strategy. Prior to that he spent four and a half years at Credit Suisse, firstly as the bank’s precious metals analyst and subsequently as Head of Global Commodities Research. Previous roles include Precious Metals Strategist for Mitsubishi Corporation and Head of Market Research for Johnson Matthey PLC. He holds a BSc in Geology from Southampton University.