This article is based on a speech which Beresford delivered at the LBMA/LPPM Conference in Singapore, 16-18 October, 2016. 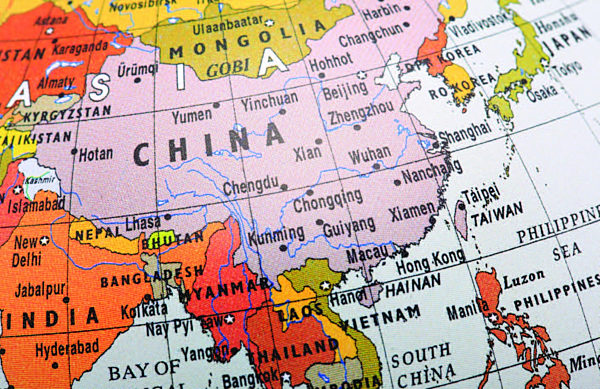 This article is about Asia and its impact on the PGM market now and in the future, looking at it from the top down and giving you some of the detail in the individual sectors.

I would like to begin with Singapore, which is well known as a substantial hub for business activity. When I looked at it from a PGM industry perspective using red dots on a map to delineate activity employing the use of PGMs whilst I was travelling on the plane to the conference, I realised the island strongly resembles a case of chickenpox! What I am trying to say is that there is, shall we say, a rash of activity of PGM business across the island, not only in what we know about vaulting and the financial district that we are in, but also in oil refining and the production of hard disk drives, along with many other manufacturing areas using PGMs, as well as a recycling hub.

Asia’s influence on PGM markets is a very broad topic, so I have tried to drill down to five major points, starting with what is PGM demand and what drives it? The demand drivers for PGMs are really discretionary purchases. Populations in Asia are growing richer, as we know, and that increasing affluence goes hand in hand with PGM demand. Then, getting to the nub of the story, which is mainly an automotive story, it is very much about palladium demand. With that in mind, how much potential stock exists in China? How might that volume of stock influence the market going forward? Overall, how might Asia’s influence on PGMs take place and what does that mean for the future of these markets?

As I said, starting right at the top and looking at total global PGM demand, it is very much the discretionary purchasing of big-ticket items such as cars, jewellery and gadgets. Therefore, based on predicted future growth in the Asian middle class, 200 million extra members of the middle class are a significant driver for demand. The bulk of PGM usage is in automobiles (about two- thirds), with about 16% in jewellery.

The bank of charts (see chart right) look at GDP per capita as a measure of wealth against PGM demand for China, Southeast Asia, Japan and India. As you can see, increasing wealth goes hand in hand with increasing PGM demand. Most of this growth has occurred since 2000. There was a slight lag in PGM demand in Japan, but it eventually rallied, and in a maturing economy, PGM demand naturally starts to tail off slightly going forward, but hopefully with strong marketing, it can be maintained.

Perhaps not the core part of the story, but there is also a rash of PGM industrial activity across Asia. Here we are looking not at discretionary items, but reminding ourselves of just how useful PGMs are: they are employed in the refining of fuels, gasoline, diesel, nitric acid for fertiliser production, glass production, the manufacture of flat screen TVs and so on, as well as in electronics and many chemical applications. There are currently more than 100 projects in Asia that are being tabled in numerous different applications using PGMs. All of that stacks up to a total of about a million ounces of platinum, but obviously that is not going to happen in a year – it could be spread over five years, perhaps longer. The new projects may lead to closures in capacity elsewhere in the world to make way for new production in Asia, but it is very exciting. There is a fairly large cluster near Singapore as well, so, again, Singapore is a very important hub for PGM demand in the future.

Just to bring Asia’s PGM demand into focus, as I said to you before, it is very much a palladium story, as you can see on chart 2. Palladium automotive demand in Asia has grown from about 1.5 million ounces to just over 3 million ounces. As most of you will recall, since 2007, the palladium price has risen markedly – it is about three times higher – but this has been to the detriment of other end uses, particularly jewellery demand, which has come off quite considerably over the period.

For platinum, it is very much a jewellery story. Back in 2007, demand was about 1.5 million ounces. Close to 700,000 ounces of platinum demand has probably been added to the market since then, which is equivalent to the third- largest producer’s output over the period. As a consequence, we have seen the growth of recycling during that period as well. The bottom line is that it is very much a gasoline automotive palladium story we are talking about in Asia.

We can put Asia’s autocatalyst PGM demand into perspective by comparing Asia against Western Europe and North America. If you look at 2007 and compare Asia to the other continents, you can see that Asia is very much in third place relative to the Western world. Go forward to 2016 and it is clear that Asia’s demand has jumped from under 3 million ounces to over 4.5 million ounces. Again, it is very much a palladium story that has driven Asia’s demand, with platinum and rhodium usage remaining quite stable over the period. Western Europe and North America are still struggling from a PGM perspective to recover from the financial crisis, to the detriment of platinum and rhodium demand. Again, you can see from chart 3 that palladium demand in all areas has increased since 2007 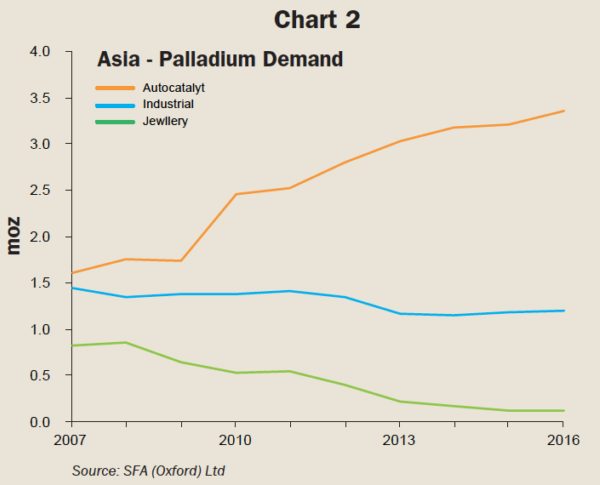 Looking to the future, an informative way of showing potential automotive demand is the vehicle ownership levels per thousand of the driving population. The ownership level in the USA is pretty much one car per person, compared to Western Europe and Japan, with very densely populated areas and sophisticated transport infrastructures, which have between 500 and 600 cars per thousand of the driving population. As a continent as a whole, Asia is down at the bottom, with only 10% of people who can drive owning a car. There is huge potential upside in the region and the outlook to 2030 is for vehicle ownership to double to 20% of the driving population. This is not a massive percentage increase, but in terms of population, as in India and China, this represents a huge number of cars.

Most of the growth will come from China’s ownership accelerating from a very low level today to around 30% of the driving population potentially owning cars by 2030. Of course, all manner of events can happen in the meantime – we are looking at 13 years out. There is considerable macroeconomic stress worldwide, and it is more than likely that we will experience a recession at some point in the not too distant future. Additionally, technology change is appearing on the horizon. I noticed that someone had parked a BMW i8 in the front of the hotel yesterday – electric cars are not good news for the future of PGM automotive demand. Nonetheless, whatever happens, palladium demand will be significantly higher over the medium term than it is today.

“There is considerable macroeconomic stress worldwide, and it is more than likely that we will experience a recession at some point in the not too distant future." 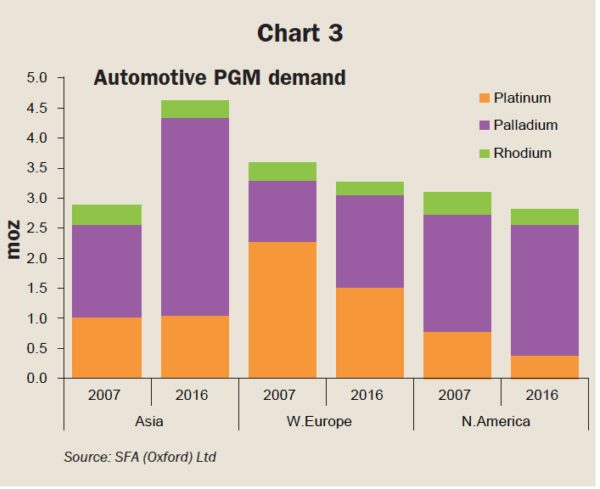 What does this mean? Well, in China, there has been a disconnect between imports of palladium and demand. From 2010 to 2014, imports of palladium flat-lined at between 1.2 and 1.3 million ounces per year, which is a real ‘head scratcher’, but essentially much of the jewellery that was sold in China in between 2004 to 2011 – adding up to over 5 million ounces – has been flowing back to market. Speaking to recyclers in China, there is a suggestion that these flows are starting to come off quite considerably, so how long will these flows last? Excitingly, from the palladium market’s perspective, as you can see, imports picked up quite considerably in 2015. Certainly, year-to-date imports are up quite a bit, so we are starting to narrow the gap to demand, suggesting that maybe China is stocking up its palladium and it could start to draw in more stockpiles from other parts of the world.

Bringing that all together, autocatalyst demand for palladium has been exceptional in terms of growth for Asia. Looking at the supply-demand balance for palladium globally on a naked basis, excluding Russian stock sales, you will see that the palladium market has been in significant deficit for some time. If we look at our estimates of the palladium stockpiles, they started from a very high base of over 25 million ounces in the 1990s and have been coming off at a pretty rapid rate ever since.

One plus two does not equal three, unfortunately, as price volatility has not reacted accordingly. As is apparent, since 2008, price volatility has been dropping off, suggesting that there has been plenty of metal to supply demand. There was a slight breakout in price volatility recently, so I would suggest you keep an eye on this cockpit on your dashboard. The trade flows into China are also very good leading indicators of when a market squeeze might force palladium prices higher.

To conclude, Asia’s influence is set to strongly determine palladium’s future. Will it be boom and bust, which is a major concern – and, obviously, we want the sustainability of the palladium market to continue – or will we have a major recession somewhere along the line or technology shifts that help to extend the stockpile for longer? Either way, we think palladium is probably the most exciting market of the PGMs and it is certainly worth watching this space.

Beresford Clarke, In addition to his day-to-day running of SFA (Oxford), Beresford Clarke’s principal remit is responsibility for the analyst team, research and product innovation, and as lead research author. He has been a specialist PGM market analyst for over 10 years. In this time, his development and deep understanding of the market has been fast tracked with extensive industry exposure throughout the upstream and downstream PGM industry. His most recent initiative has been to develop interactive, internet-hosted, scenario databases for clients; the first being SFA’s cost modelling software called Insight. He has extensive upstream experience including high profile work in M&A defence, acquisitions and capital raisings ($5bn to date), project valuations, on-site mine restructuring, feasibility studies, industry workshops and Board-level motivations and strategy. He officially joined SFA (Oxford) in 2005 as an analyst, having worked with the company since 2003. He was promoted from Senior Analyst to Head of Research and Principal Market Analyst in 2008, before becoming Managing Director in May 2013.