President Trump won last November’s US presidential election, offering a bold yet vague set of economic policies including tax reform, increased infrastructure and military spending, and a protectionist approach to global trade – promises that helped establish a distinct reflation trade that is long in equities/short in bonds and other defensive assets. This article explores the challenges and opportunities for gold in this brave new world of ‘Trumponomics’. 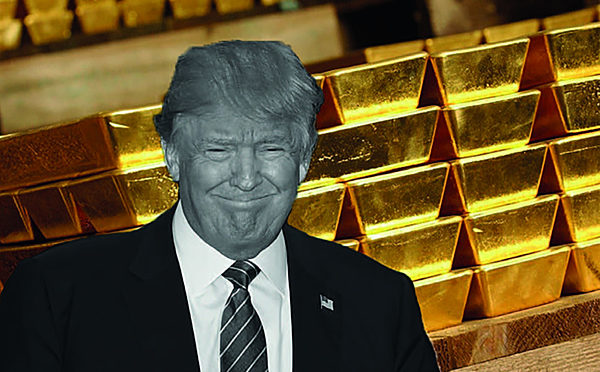 The surprise victory for Donald Trump in the US presidential election on 8 November 2016 saw gold prices rise on heightened uncertainty in the hours immediately after the election result. Bullion was soon on the defensive however, as investors piled into US equities and industrial commodities in expectation of higher growth and inflation. A move away from traditional safe-haven assets such as US government bonds saw the yield on 10-year US Treasuries (which move inversely with prices) increase to two-year highs of over 2.6%. The consequent increased cost of carry served to further tempt investors away from non-interest-bearing gold and precious metals. By mid-December, bullion had slumped to a 10-month low of $1,123 as safe-haven trades were unwound and as the dollar rose in value to the highest level since 2003 against other major currencies.

In early 2017, gold turned a corner from its oversold levels and was to remain on an uptrend for much of the first quarter, partly as investors hedged their bullish equity and pro-growth commodity trades, and remained mindful of the downside risks to growth from trade and geopolitical concerns. 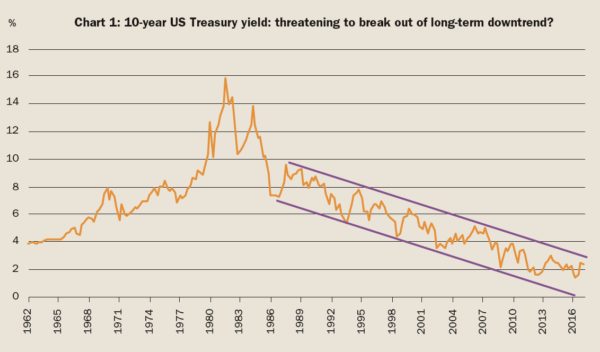 Yet US equity markets remained the clear winners as ‘animal spirits’ were unleashed by expectations that corporate earnings would soon be boosted by tax cuts and a revived domestic economy. By March, all four major US equity indices were hitting new record highs. Inflation expectations increased to over 2% for the first time since 2014 and market expectations of US interest rate rises began to converge with the Fed’s relatively hawkish rate outlook. Most significantly for gold, the yield on 10-year US Treasuries looked like breaking out of its 30-year downtrend (see chart 1) as investors continued to rotate out of bonds and send yields higher – with the implication that the inflation-adjusted real interest rate environment may be less favourable to gold in future.

This ‘reflation trade’ came to a crashing halt in late March after President Trump’s reforms to the Obama administration’s Affordable Care Act were rejected by Congress. The failure of this high-profile campaign pledge immediately cast into doubt the ability of President Trump to push through ambitious tax cuts and infrastructure spending plans. Equities suffered a sharp drop, longer-term inflation expectations receded back below 2% and gold jumped back to levels seen just after the election, supported by ETF, physical and OTC/futures buying. That Mr Trump, the self-proclaimed ‘deal-maker’, singularly failed to reach an agreement on a key campaign issue, largely with those in his own Republican party, both ups the stakes for discussions on tax reform and fiscal spending and heightens political and economic uncertainties – conditions in which gold traditionally performs well.

What therefore will Trumponomics mean in future and what are its implications for gold?

Promises of $1 trillion of additional spending on the military and infrastructure implies higher demand for everything from oil to construction materials, and also offers to create more jobs at a time when the US unemployment rate is at the lowest in a decade, at 4.5%. This is of course potentially inflationary and should be supportive of gold over the longer term as a traditional inflation hedge.

However, conservative Republicans in the House of Representatives are only likely to approve new spending where it is cost neutral. In other words, where the spending is met from savings elsewhere, so the inflationary implications of fiscal stimulus are probably much less than anticipated, and there will in effect be a reallocation of existing spending and consequently a muted net impact on job creation. Inflation outlook measures basedon 5 and 10-year US Treasury breakeven rates have begun to reflect this, with inflation expectations back below 2%. Lower inflation, while not necessarily supportive of bullion, does imply that US interest rates will not be raised as quickly as the Fed might like, particularly if measured Personal Consumption Expenditure inflation remains below the Fed’s target of 2%. This in turn will help keep real (inflation adjusted) yields in negative territory and therefore favourable to gold and other non-yielding assets (see chart 2). 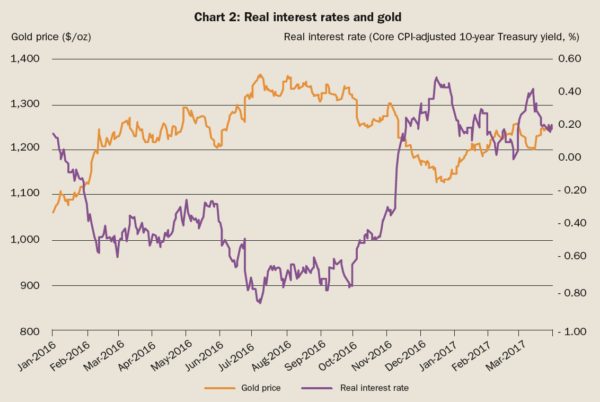 Much of the bullishness in equity markets in late 2016 and early 2017 (see chart 3) was predicated on US corporations seeing a cut to their tax rate, possibly of the order of magnitude that Candidate Trump was keen to promote, from the current headline rate of 35% to 15%. Given Congressional restrictions on increasing the budget deficit, any decrease in the tax base will have to be met with reductions in government spending – which may be politically unacceptable. This partly explains why Mr Trump as President has recently appeared more comfortable with the 20% rate. This is not far from the 20% to 28% effective corporate taxation rate after accounting for various deductions and, as such, the heady equity valuations that have resulted partly from optimism on changes to the tax code may not be justified by the political reality of few major changes to tax rates.

Gold could therefore gain as the euphoria in the equity markets fades and there is a rotation back into defensive assets.

A further complication for the reflation trade comes in the shape of the differingapproaches of the Trump administration and that of House of Congress Speaker Paul Ryan. While the White House is yet to publish a firm tax reform plan, Mr Ryan’s approach is to replace corporate income tax with a 20% tax on businesses’ domestic sales and imports, while exempting exports (the so-called border adjustment tax). Although initially hostile, Mr Trump may be warming to the idea, which fits with his overall protectionist trade stance. This and changes to the personal tax code, which together have been billed as the most ambitious set tax reforms since the Reagan administration, nonetheless look set to be mired in political wrangling for some time yet. The reflation trade may therefore wither if equity market momentum is not sustained by progress on tax reform. 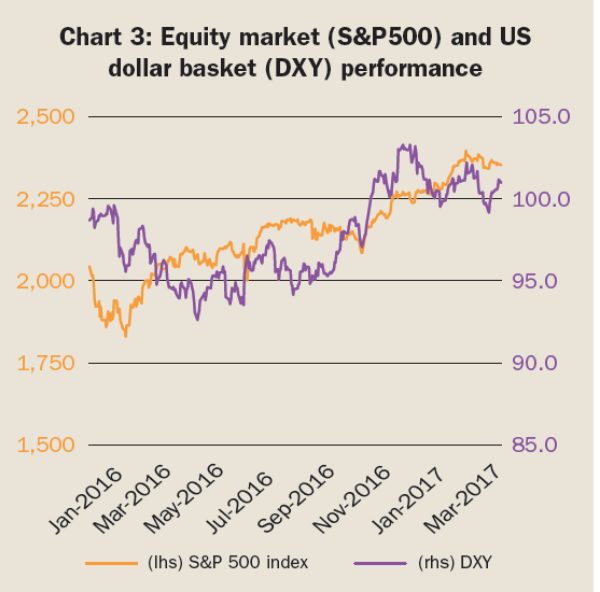 On the face of it, two key elements of Trumponomics – increased Federal spending together with a falling tax base due to cuts in personal and corporate rates – imply an ever-larger Federal budget deficit. While this would be supportive of gold as a risk hedge, fiscal conservatives in Congress are unlikely to countenance any measure that will increase the deficit. However, discussions over the US budget deficit still loom large at the time of writing and may yet spill over, intentionally or not, into a failure of confidence in the US to repay its debts or even an outright default. The nearest parallel for this is the debt ceiling negotiations of 2011, when bitter political disputes forced the US to the brink of sovereign default and caused credit rating agencies to downgrade US debt for the first time in history. The increase in gold to all-time nominal highs of $1,921 in August-September 2011 offers a glimpse of what could happen to gold in the event of a return to this sort of political and economic impasse.

Broadly speaking, a decline in global trade implies a slowdown in economic activity and a move by investors to the relative safety of gold. However, there are no modern parallels for the world’s leading economy to step away from globalisation in the way that Mr Trump promised on the campaign trail, or any firm clues as to what the response of other trading nations would be. What does seem clear is that gold will remain well bid as a safe-haven for the extreme though still unlikely event that trade disputes will have a material impact on global economic growth.

“The most likely outcome is still that the dollar appreciates on trade protectionism and domestic US growth, but this will not necessarily be negative for bullion if a climate of uncertainty prevails.”

The Trump administration’s approach to global trade also faces a conundrum in the form of the US dollar. Protectionist trade policies combined with domestic economic stimulus would ordinarily result in a high valuation of the greenback against other major currencies. This in turn would make imports into the US cheaper and increase inwards trade, while making conditions less competitive for US exporters. The voicing of support for a strong dollar by some in the administration is therefore inconsistent with the forms of protectionism currently under discussion. Any deliberate weakening of the dollar would of course threaten the sort of beggar-thy-neighbour competitive devaluations in other currencies which would be sure to boost gold both relative to a weaker US dollar and as an alternative currency in its own right. The most likely outcome is still that the dollar appreciates on trade protectionism and domestic US growth, but this will not necessarily be negative for bullion if a climate of uncertainty prevails.

Having raised interest rates in March 2017 for only the third time since the global financial crisis that started a decade ago, the US Federal Reserve now intends to carry out two or three further rate hikes during 2017 – each of which is likely to increase the real rate environment and could see bullion come under some short-term selling pressure. However, the pace of Fed tightening will still be the most gradual of any US rate hike cycle in history, and the risks to the Fed’s outlook are still to the downside due to the uncertain US recovery and elevated debt levels. The Fed has also recently signalled that it will begin to offload some of the $4.5 trillion of government debt and mortgage-backed bonds it accumulated on its balance sheet during successive rounds of quantitative easing. While this is likely to be done in a gradual way as the Fed simply stops reinvesting the proceeds from maturing bonds, it could go a step further by selling government assets to the market. This could depress bond prices and raise yields on Treasury debt – making real interest rates less favourable to gold. However, pursuing a path of reducing its balance sheet at the same time as raising interest rates could force market dislocations that choke off economic growth and support gold.

After the dollar and stock market euphoria of late 2016 and early 2017, there are already signs that the Trump reflation trade may be more an expression of hopeful sentiment rather than a new paradigm of actual higher economic growth and inflation. Treasury yields, the dollar, equity valuations and inflation expectations are all reversing their previous gains, to the benefit of gold. Though it remains too early to say with any certainty, bullion may even end up benefitting further from the Trump administration’s changes to the regulatory environment and the promotion of US manufacturing. As Trumponomics, in whatever form it ultimately takes, brings a new set of political, economic and trade uncertainties over the coming four years, gold should have plenty of opportunities to shine as a safe-haven asset and portfolio diversifier.

Dr Jonathan Butler is Precious Metals Strategist at Mitsubishi Corporation in London where he is responsible for business development as well as Mitsubishi’s global research on the gold, silver and PGM markets. Jonathan previously worked as Publications Manager at Johnson Matthey, where he led the publications team and was responsible for producing the company’s semi-annual benchmark ‘Platinum’ reviews. Jonathan gained his doctorate in geosciences from the University of Edinburgh and also holds MSc and MA degrees from the University of Oxford.