This is an abridged version of the presentation delivered at the LBMA’s Assaying and Refining Conference on 20 March, 2017. 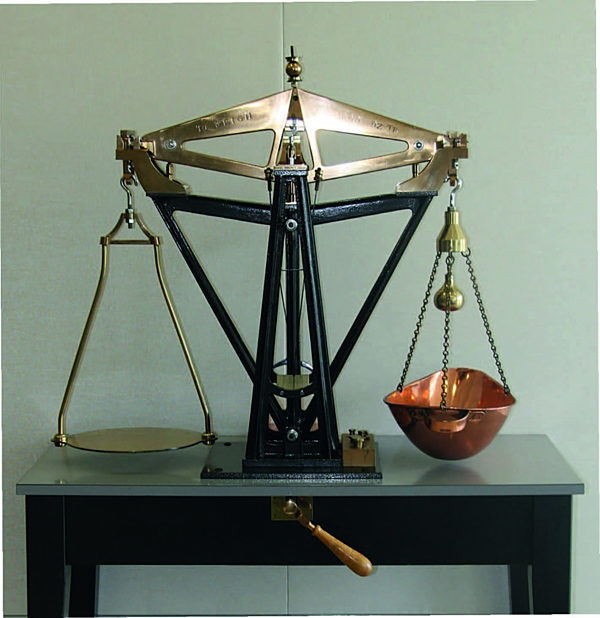 Development of the AMIRA Code of Practice for Metal Accounting was sponsored by a number of the world’s largest mining companies, including Rio Tinto, BHP Billiton and Anglo American. It was released in 2007 and is now used in many operations around the world. That same project by AMIRA also generated a textbook called An Introduction to Metal Balancing and Reconciliation published by the University of Queensland, Australia, in 2008. I need to acknowledge the work of my colleagues who worked on the Code with me: Neville Randolph, who handled the sampling and analysis; Mike Wortley, who did the mass measurement; and Dr Rob Morrison of the University of Queensland, who edited the textbook.

Since the release of that Code, the team who developed it have been asked to conduct a variety of metal accounting audits based on the Code at various operations, mainly in Southern Africa but elsewhere in the world as well. We have also given a number of training workshops, initially at sponsors’ operations, but more recently at various training venues, including several in-house courses, for example, at the Rand Refinery. 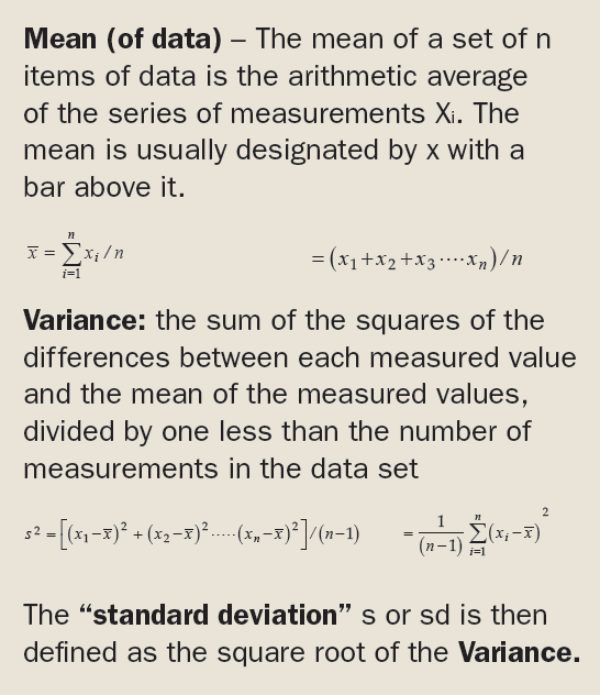 In the work we have done in compiling the Code, in talking to people and auditing their operations, and in running workshops, we have found that the concepts of variances and accuracy and precision are still a very woolly or grey area in many people’s minds in a lot of metallurgical operations.

Every figure used for metal accounting – whether it is a measurement of feed or product, which could be concentrate, matte, final metal or discard – is based on the measurement of the mass of the material concerned and the analysis of a sample of the material. That sample is obtained by sampling the bulk material. The primary sample may require splitting to give a secondary or laboratory sample. The laboratory sample will require preparation and splitting to give an analytical sample, and that preparation could involve a variety of steps, such as moisture determination, crushing or lump breaking, blending and so on. At each of these process steps, there is the possibility of error through contamination, loss of sample, sample segregation and so forth.

Generally, we have found in the operations we have audited that there seems to be, as far as metal accounting is concerned, a very strong focus on the performance of the analytical laboratories involved. The effects of sampling and mass measurement errors tend to be overlooked.

Reconciliation of metal accounting figures is required whenever a commercial exchange of metal-bearing material – ore, concentrate, matte or final metal – occurs, resulting in a custody transfer. The receiver has to be satisfied that he is not paying too much for the metal content, while the sender or seller has to be satisfied that he is not being underpaid. Hence, there is a risk associated with each such transaction. Reconciliation is achieved when each party agrees that the metal accounting figures recorded separately by them are both accurate and within acceptable limits of precision. This requires that the parties understand the possible sources of error in the figures being reconciled as well as their prior agreement on what those acceptable limits of precision are.

Below are some definitions that we have found are not well understood by many people in the mining industry.

A measurement is accurate if it, or the average of a number of measurements, is close to the true value. In metallurgical operations, this true value is unknown.

Further definitions of mean, variance and standard deviation are shown in figure 1.

In metal accounting, variances occur where any measurement of material is carried out or where that material is divided or sampled. Variance for mass measurement is called VM.

Moisture determination is VH2O. Sampling is VS. Sample preparation is VSP. Analysis is VA.

For reference purposes, we call this Equation A.

To illustrate how this can be applied, I have used a PGM toll smelting example which I originally included in a paper presented at a Southern African Institute of Mining and Metallurgy conference, Platinum 2012. It relates to a small platinum producer producing about 120,000 oz of platinum per year from Merensky Reef. Typically, such a producer would ship 80 to 90 tonnes per day of concentrate in three 30-tonne truck loads to a smelter to be smelted. Each truck is weighed and sampled by both the shipper and receiver, and each day’s receipts constitute an accounting batch.

In standard commercial toll treatment terms, the settlement is based on the receiver’s mass and moisture measurements and sample. The sample is split, and the same sample is analysed by both the receiver and shipper. The analytical results are exchanged on a pre-arranged date. If the results do not agree within specified limits, settlement is delayed until final metal values are agreed by negotiation or by umpire analysis. The shipper is entitled to be present at the weighing and sampling of concentrate at the receiver’s plant. The shipper obviously should also have similar sampling and mass measurement facilities to identify possible biases or errors. 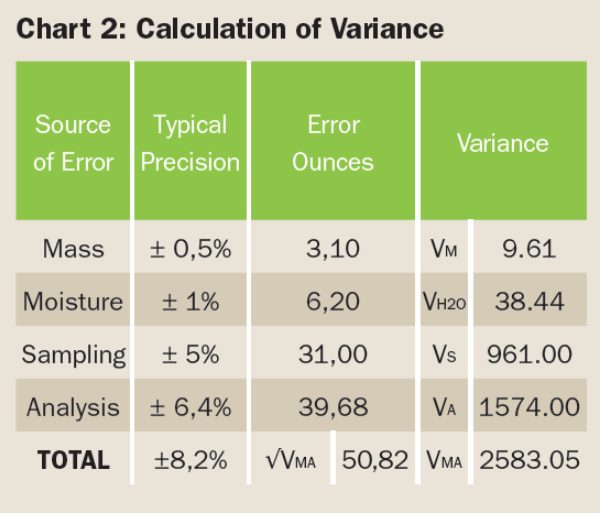 The effect of the base metals is excluded from the table in chart 1 above, but it shows a typical daily shipment. There are 90 tonnes of concentrate and a total of 620 oz of contained PGM, with platinum (367 oz) and palladium (163 oz) being the major ones. The metal prices are probably not totally current, but they are not very far from being correct. The daily value shipped comes to a total of $550,000.

The splitting limits are defined in the toll treatment commercial terms and define the acceptable limit of analytical difference between the receiver’s and the shipper’s laboratory for each valuable metal. The figures shown are not atypical of actual industrial performance at the time that the paper was presented in 2012 and reflect the accepted level of error in the concentrate analyses for each reported metal. On a daily shipment, with a value of $550,000, there is a total potential error of about $35,282 or 6.4%. With these toll treatment contracts; the focus was on the analytical splitting limits and that was how the settlement was arrived at. The other risks tended to be ignored. In this particular case, both reporting laboratories analysed the same sample and the receiver’s mass was used, as mentioned earlier. The precision levels shown here are, therefore, only those related to each laboratory, which incorporates splitting the laboratory sample to give the analytical aliquot and analysis of the sample itself. The precision levels related to mass measurement and sampling are not taken into account in assessing the risk to each of the parties.

The paper presented in 2012 was looking at the importance of sound metal accounting to achieve a good toll smelting contract. The effect of mass and sampling variances, and whether they are significant, was not considered.

From extensive experience in the industry, typical precision levels for the different components of the determination of the metal content of each shipment are as follows (see chart 2 below):

The analysis, as shown, is ±6.4%.If you take those typical precision levels for mass and moisture measurement and sampling, and you apply these to the total of 620 oz of PGM in the shipment, as shown in the table in chart 2 above, you have: 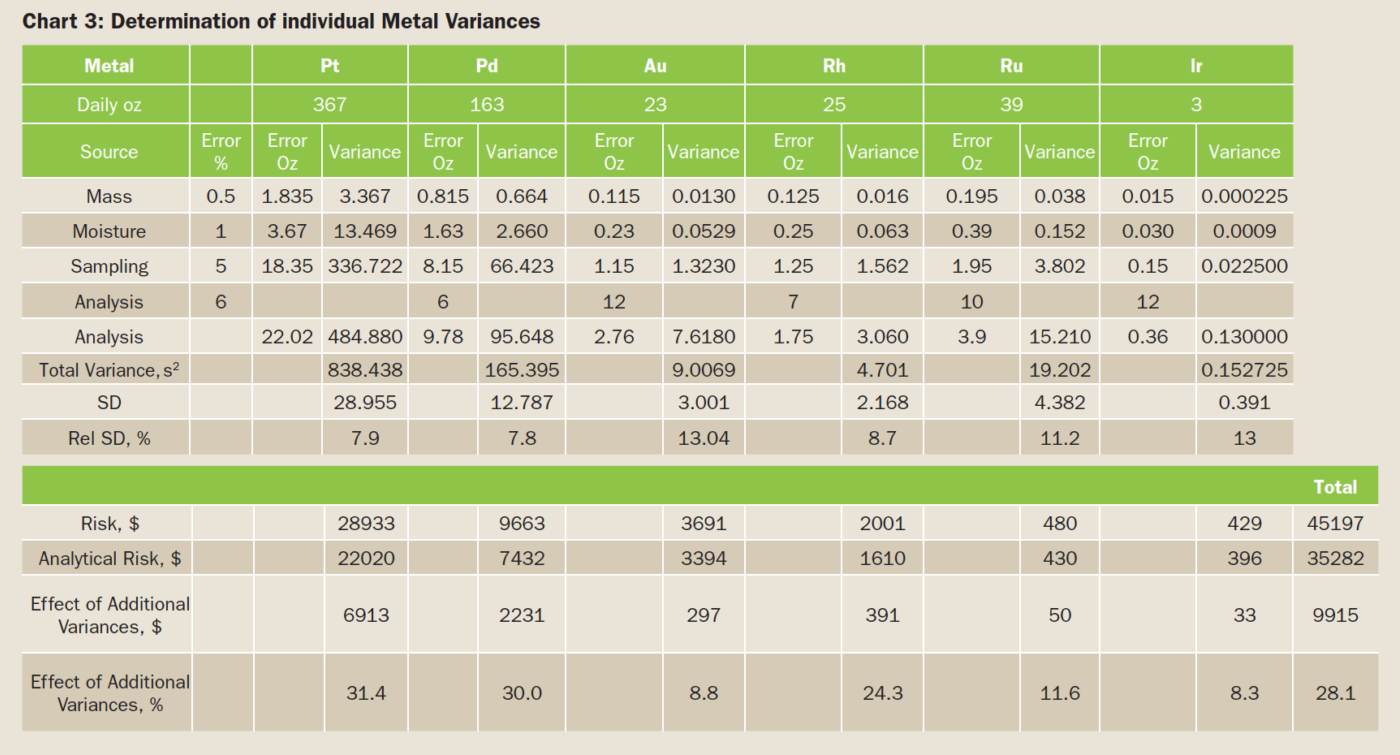 From this analysis, one might conclude that, since the overall risk has risen from 6.4% to 8.2%, there is no need to pay much attention to the mass measurement and sampling errors until the analytical errors can be reduced. Equation A can be rewritten as: VMA = VM/H2O + VS/SP + VA.

We refer to these as the tripod of measurements, and all of them should have similar values. If one is out of line, the tripod tilts. In this case, in fact, the VM/H2O is significantly less than the VA and the VS/SP is also less than the VA, so attention should be focused on improving the analytical precision.

However, at the same time, the total risk has risen from $35,000 to $45,000 on a shipment – an increase of 28%, which is not insignificant. This whole approach was simplified for illustrative purposes, but a more rigorous approach would be to carry out the same exercise for each metal.

In the table in chart 3 above, the individual analytical splitting limits have been applied to each metal, using the same procedure and methodology to give a standard deviation and a new precision for each metal. Platinum has moved from 6% to 7.9%; palladium from 6% to 7.8%; gold has hardly moved from 12% to 13.04%; rhodium has moved from 7% to 8.7%; ruthenium from 10% to 11.2%; and iridium has gone from 12% to 13%. The analytical splitting limits for gold, ruthenium and iridium are relatively high, and the effect of the additional sampling and mass measurement variances is less marked. Using this approach, the risk changes slightly to give a total of $45,197, which is not very different from the figure obtained through the simplistic approach. The analytical risk was $35,282, so the change is $9,915, which is 28.1%.

The interesting figures to look at are the effect of the additional variances on the platinum, palladium and rhodium risks. Platinum has increased by 31.4%; palladium by 30%; and rhodium by 24.3%.

“Total risk could therefore be significantly reduced through improvement in the sampling precision in particular and in the analytical precision.”

The increase in the total overall risk determined by the full analysis is only $117. The simplistic approach was not wrong in itself, but the more detailed analysis highlights the effect of including the mass measurement and sampling variances on the major sources of financial risk, namely platinum, palladium and rhodium. These three metals effectively account for the overall 28% increase in the total risk. Total risk could therefore be significantly reduced through improvement in the sampling precision in particular and in the analytical precision.

In metal accounting, there tends to be a strong focus on the performance of the analytical laboratories involved, as there was in this type of toll smelting contract. The effects of sampling and mass measurement errors tend to be overlooked. Determining the variance of each source of error enables those that are excessive to be identified and, where appropriate and costs permit, enables corrective action to be taken.

Peter Gaylard, Independent Consultant. Peter worked in the Platinum Industry for approximately 30 years, where he was involved in all areas of the metallurgical extraction and refining processes, including being General Manager of Impala Platinum’s Refineries and Senior Manager in charge of all of Impala’s metallurgical operations, and subsequently as Senior Consulting Metallurgist to Impala. Prior to retiring, he joined the Department of Chemical Engineering at the University of Cape Town, where he worked for ten years and held the post of Adjunct Professor. While at UCT, he served as a consultant to various mining companies, mainly in the Platinum Industry, and also as Research Coordinator and, later as Research Director for AMIRA International. He was the convenor of the team that compiled the AMIRA Code of Practice for Metal Accounting. He retired to Plettenberg Bay in 2007 but continues to serve as a metallurgical consultant.