The History of Precious Metals in Spain

Jens Weidenbach dips into Spain’s long historical association with gold and precious metals to provide a brief insight into the some of the more interesting periods of Spain’s rich and colourful past.

Featured are four distinct, albeit unconnected periods of history, featuring the Romans, Visigoths, the Renaissance and finally a look at what has been happening in the market more recently. Perhaps the most famous period of Spain’s association with precious metals – the flows of gold from the Americas during the 1500s to the 1700s – is covered in more detail in a separate feature article by Pedro Schwartz on page 3.

A brief insight into the period of Roman rule

The first documented gold trading was in about 700 BC, when the Phoenicians came to Spain to trade their tools and glass beads for Spanish gold. In 25 BC, the region of el Bierzo, which included the mine that was to become the largest of the entire Roman Empire, was conquered. Two hundred years later, mining in ‘Las Medulas’ started on a large scale. The gold and silver that was excavated there financed the rest of the Roman expansion. The mine met the desire for greater wealth and benefitted from the ‘free’ local labour available after the Romans gained dominance over the territory.

The Romans were well known as specialists in hydraulic mining. To expose and release gold deposits from the earth, they used hydraulic pressure. Miners would carve aqueducts into the rock, which were used to transport water from the nearby creeks and rivers. Then the flow of water would fill the excavated cavities, causing pressure streams strong enough to pierce and break up the thick rock walls. The mine featured channels and reservoirs, as well as intricate hydraulic systems, which diverted high-pressure water to the site for processing. The water was also used to wash the gold deposits. This method was used all over the world until the 1800s. 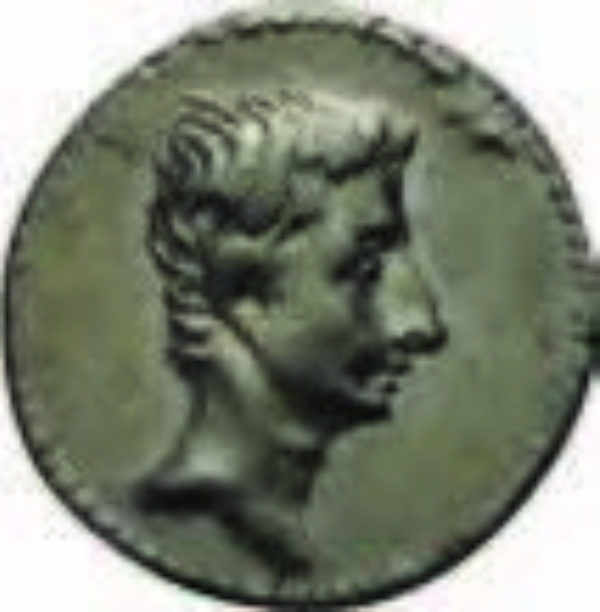 Roman military commander and author Pliny the Elder, who oversaw mining in Hispania, described the process:

“What happens is far beyond the work of giants. The mountains are bored with corridors and galleries made by lamplight with a duration that is used to measure the shifts. For months, the miners cannot see the sunlight and many of them die inside the tunnels. This type of mine has been given the name of ruina montium – collapsing mountain. The cracks made in the entrails of the stone are so dangerous that it would be easier to find purpurine or pearls at the bottom of the sea than make scars in the rock. How dangerous we have made the Earth!” 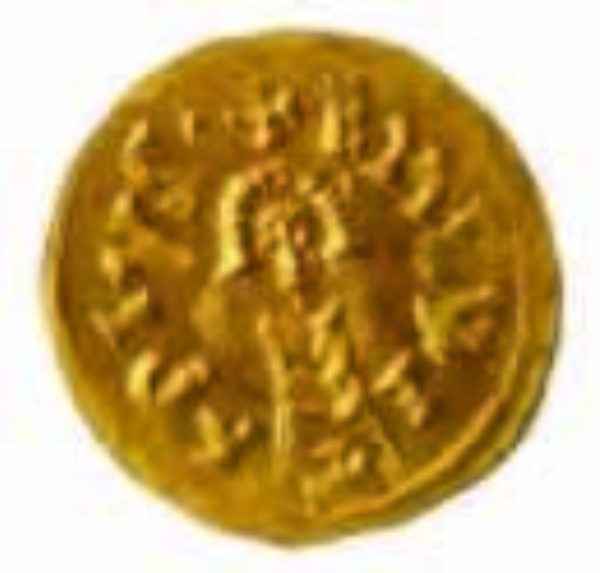 Numismatic coin showing Sisebut, King of the Visigoths and ruler of Hispania and Septimania, from 612 – 621; 1.45 grammes

The Visigoths are at the gates

Under the dynamic King Leovigild, the Visigoths kingdom flourished. His aim was to rule over the whole of the Pyrenean peninsula. In pursuit of this expansion, Leovigild fought campaigns against the east Romans, the Kingdom of Suebi (now the region of Galicia and north Portugal), the Cantabrian, the Basque and other smaller kingdoms. In 570, he “laid waste the region of Bastetania and the city of Málaga, by defeating their soldiers”. His campaigns continued annually over the next five years. Despite the fact that he was constantly at war with the Byzantines in the south of Spain, Leovigild tolerated them and embraced their way of living as well as their monetary system. From the start of his reign, the Visigoth kingdom issued coarse coinage of its own designs. During a rebellion in southern Hispania, Leovigild struck and issued gold tremisses with a cross first introduced by Emperor Tiberius II. However, when he regained full control of the Iberian Peninsula, he stopped displaying the image of the Roman emperor on his coins to signal denial of the formal authority of Constantinople. 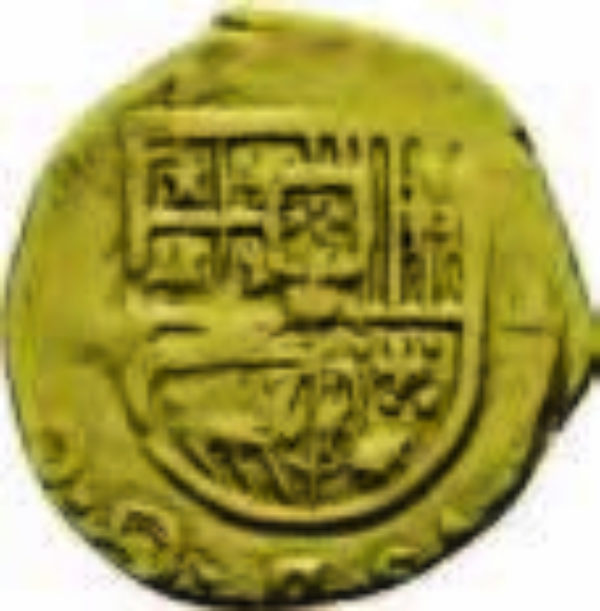 Gold Drives up Prices During the Renaissance Period

The Spanish price revolution began in about 1470 and lasted until around 1650, during which gold and silver poured into Spain from the new world. The amount of gold arriving from across the Atlantic each year drastically increased following the discovery of precious metals in South America. Twenty percent of all loot taken from the conquests was reserved for the King of Spain and was referred to as the ‘quinto real’ or ‘Royal Fifth’. Most historians consider the end of the Renaissance as the start of the Spanish price revolution. It increased Spanish prices and consequentially spread inflation throughout western Europe. Economist Earl Hamilton argues that prices in Spain rose by approximately 250 percent between 1500 and 1600. The consequence was that Spanish exports became uncompetitive in Europe. There was a rapid increase in money (then silver and gold), chasing a fixed amount of goods. It enlarged the money supply and prices across many European countries. The influx of gold contributed to Spain’s relative decline and low living standards in future centuries. The Spanish spent their gold on commodities from other countries, without producing much in terms of exports themselves. Because consumer goods could easily be imported, there was little incentive to produce goods and undertake the necessary investments in infrastructure and develop the domestic economy, particularly in respect of investing in technology. When the flows of gold dried up, the Spanish economy was left lagging behind that of its European neighbours, which led ultimately to a decline in the Spanish empire.

England, by contrast, was arguably, the chief beneficiary. The huge quantities of treasures acquired by Sir Francis Drake enabled Queen Elizabeth I to pay off a considerable chunk of the national debt. The accumulation of gold helped finance a rapid expansion of the navy. It is an irony that the industrial revolution, which was to follow in the nineteenth century, may never have got off the ground in Britain, if it had not received this substantial windfall of treasures.

It is also worth noting that although the inflows of gold and silver were huge sums for the time, they only represent a fraction of today’s annual global gold production. In the sixteenth century, total gold global production is estimated to have been less than 100 tons compared to more than 100,000 tonnes of global production during the twentieth century. 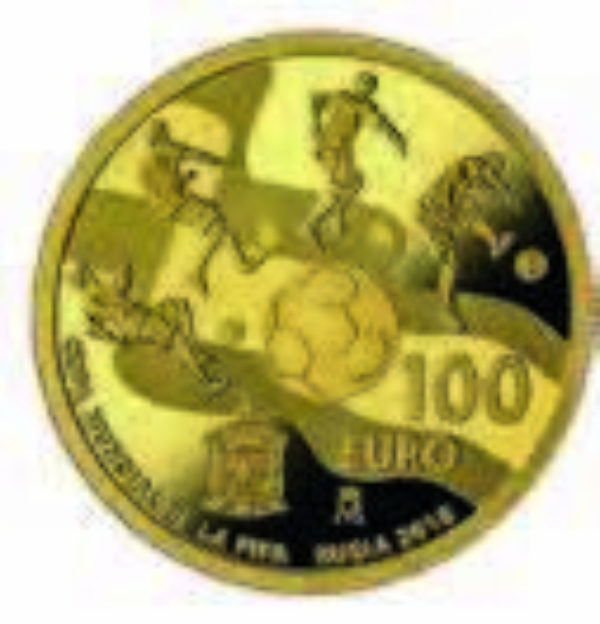 Spanish gold coin to commemorate the 2018 World Cup in Russia. The obverse includes the image of H.M. King Felipe VI introduced on Spanish coinage in 2014 after his accession to the Spanish throne in 2013.

In the 1980s and 1990s, gold was not a common form of investment in Spain. It was very difficult to purchase, largely because it was only possible to do so through the Spanish central bank, and coupled with punitive tax rates, gold lost its attraction as an investment. Even the EU liberalisation of the gold market, at the end of the 1990s, did little to improve the situation.

The advent of the financial crisis in 2007 led to many Spanish citizens selling vast amounts of jewellery – in some years, as much as 50 tons – as scrap gold for recycling through the rapid proliferation of cash-for-gold shops which began to spring up in Spain. This particular market responded to a different side of the crisis, as it catered to people who needed to sell their jewellery for financial reasons. Most of the scrap gold and jewellery was sent for recasting to refineries, particularly in Switzerland and the Middle East. Whilst the government was working out whether it needed to be bailed out, citizens in other parts of Southern European were swapping their euros for gold.

As the financial crisis deepened, Spaniards still seemed reluctant to invest in gold as a means to protect themselves against the potential collapse of the euro, instead preferring to continue to regard home ownership as their main asset. However, against a backdrop of plummeting property values, increased taxes and uncertainty in the euro, gold may well turn out to be the Iberian’s best opportunity. Indeed, if we look at what is happening today, there are signs that people in Spain are becoming more aware of the merits of investing in gold as an investment and a way to diversify a portfolio.

According to Marion Mueller, Vice President of the Spanish Precious Metals Association, Spaniards’ interest in gold is experiencing a noticeable boost.

“Up until very recently, to speak about gold as an investment or as wealth protection insurance was grin-provoking. That is changing,” says Marion Mueller. “Since 2010, when the Spanish economic downturn became inescapable, a growing tendency to invest in physical gold has developed among Spanish investors, brokers and financial institutions. There is still confusion and lack of information about gold as a way to protect one’s purchasing power,” she explains, “and our goal at the AEMP and at Oro y Finanzas is precisely to try to inform people about investment gold.” Furthermore, “the rise in gold prices is a reflection not of the crisis, but rather of the end of a monetary cycle.

Jens Weidenbach’s background is in the banking sector. During his professional career as a treasurer he worked in Frankfurt, Geneva, Madrid and Tokyo. His open minded attitude and his language skills led him to achieve a vast network of business contacts all around the world. As a specialist in Investment Banking in the areas of Foreign Exchange, Options, Precious Metals, Re-Financing and Derivatives, he acquired a wide range of financial understanding and his experience and his profound knowledge is considered worth full a highly appreciated in the financial community. His precise and going to the point publications in the financial press are very much respected by lectors. His new project in Degussa Metales Preciosos in Madrid will benefit from his solid and international professional experience. And positioning DMP in MAD as a new and state of the art service of precious metals products will surely change perspectives of the market.