The Impact On The Silver Market Of The Auto Sector Electrification

On the surface, the outlook for global silver demand to 2020 is pedestrian, with the total varying very little year to year. Jewellery continues its sluggish recovery from the 2016 fall, coins and bars are under pressure, and photovoltaic (solar cell) is easing after overproduction but ahead of renewed demand. Ethylene oxide is on a strong upward march, but from a very low base. 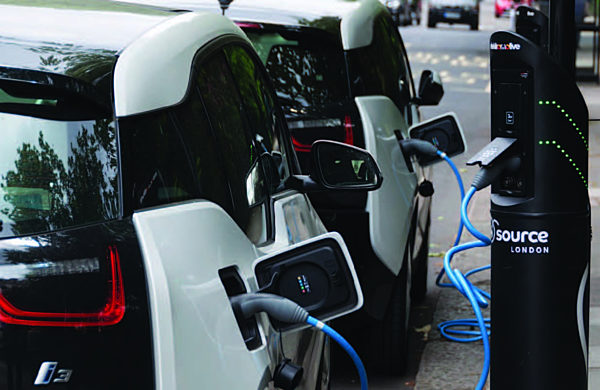 This is only a small part of the story, however, and the longer-term view is much brighter as technological changes drive different flows through the market. For example, silver demand was for many years dominated by the silver halide photographic sector before the onset of digital technology sent photographic demand for silver into a tailspin. In 1983, 35 years ago, photography accounted for roughly 49% of world silver offtake – now it is just 4%, dropping from over 4,500 tonnes to 1,325 tonnes.

But new technological developments favour silver, with the electrification of the vehicle fleet prompting a considerable boost for silver demand. The electrical and electronics sector is already benefiting from early changes and there is fresh upside for the use of solar technology in autos – the sector currently absorbs over 3,000 tonnes per annum of silver from a standing start less than ten years ago.

Solar cells will be an integral component of some all-electric cars in future in order to circumvent any difficulty with ground- based power delivery networks. Indeed, in some places, this technology is already being employed. The Toyota Prius was the first model (2016) to employ a solar panel roof, to prevent overheating while parked – when a certain temperature is reached, a power supply is triggered to a fan. Since then, a small number of vehicles have been announced that use solar panels to deliver power into a battery, enhancing driving ranges but not supplying 100% of requirements. One such is on the horizon for next year but in extremely limited numbers. Future energy independent vehicles will have various energy generating sources for continuous power, quite possibly including any rotating part that generates friction and heat. Solar panels in the side bodywork as well as the roof are an additional option under investigation. 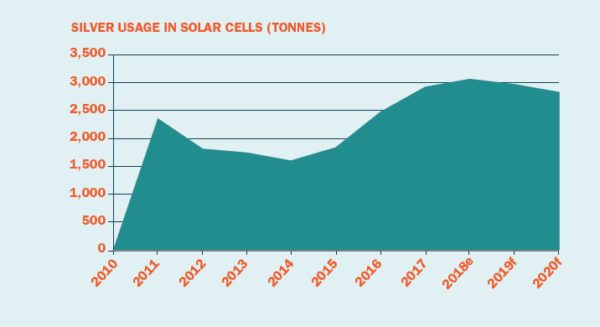 Current Automotive Usage And The Changes On The Horizon

The auto sector currently accounts for approximately 1,610 tonnes of silver demand, equivalent to 10% of industrial offtake or 5% of total offtake (excluding ETPs), but this is set for dramatic expansion. Growth should be solid in the internal combustion engine (ICE) sector, but all-electric vehicles and particularly hybrid vehicles are poised to deliver substantial increases in offtake and are expected to account for half of silver’s automotive use by 2040.

Silver has the highest electrical conductivity of any metal and this is key to its widespread use in the sector. The majority of electrical connections in a modern automobile use silver-coated contacts; for example, silver membrane switches are used to start the engine, move electrically-powered seats, open/close electric windows, and silver is also endemic to heated seats, window demisting touch technology and luminescent displays. In higher- end models, it also appears in areas such as autonomous emergency braking. Meanwhile, while thrifting has generally been successful, the need for reliability at high temperatures and in corrosive environments has rendered substitution with nickel- coated or copper-coated components unsuccessful.

Silver usage in the global ICE fleet is expected to grow from 1,491 tonnes this year to almost 1,800 tonnes in 2025 and towards 2,350 tonnes by 2040. This is predicated on auto production rising from 90 million vehicles this year to 95 million in 2025 and holding broadly steady thereafter but with per vehicle silver use continuing to rise.

The emphasis on these two dates is because they are among the keystones of government targets in a number of nations for the elimination of ICE. They do look somewhat optimistic, although the ground-breaking work at Volvo, targeting 2019 as the year in which all the vehicles rolling off its production line will be partially or completely battery powered, is a sign of things to come. Potentially more significant are VW’s far-reaching plans which will involve much greater volumes, although over a longer time horizon for implementation.

If the trajectory for 2040 proves accurate, then the combined HEVS and EVS sector of the auto industry could account for almost 2,200 tonnes of silver. 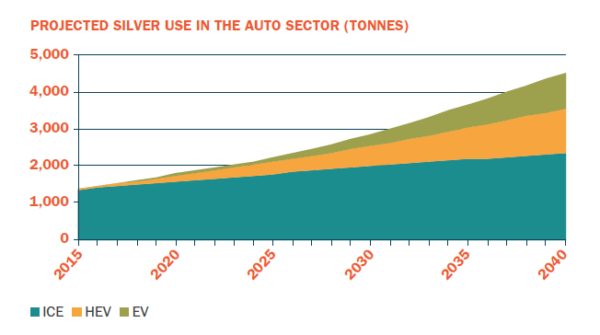 The implications for silver from the development of this technology stem from its importance in complex electronics and a host of safety features, as distinct from the solar cell aspect. Combined usage in 2018 in HEVs and EVs is estimated at 123 tonnes and is forecast to double by 2020 and to reach 450 tonnes in 2025. If the trajectory for 2040 proves accurate, then this sector of the auto industry could account for almost 2,200 tonnes of silver in that year.

Automotive silver usage is thus expected to grow by an annual average of almost 4.8% per annum. By 2040, the industry could be absorbing over 4,500 tonnes of silver annually, up by almost 3,000 tonnes against today’s levels, a gain equivalent to just under 10% of current global demand.

Rhona O’Connell is a recognised authority in the precious metals sector.

She has worked as a metals market analyst in many aspects of the industry, including the mining sector, LME brokers Rudolf Wolff, and the equity markets; as well, as acting as the group precious metals analyst at Shearson Lehman.

She is now the Head of Metals Research and Forecasting for the GFMS division of Thomson Reuters, responsible for a team of over 15 analysts.

She holds an honours degree in Law from the University of Cambridge.