Recession, Rates & The US Retail Investor

US retail investment demand has diverged from the heightened demand in Asia and stable demand in Europe, but will it continue? 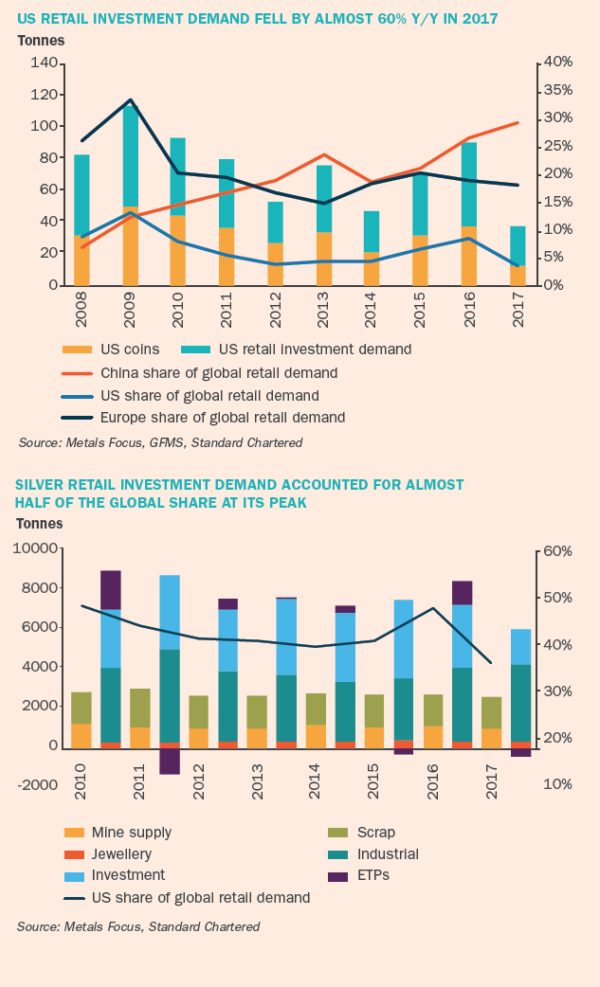 We believe the chief culprit behind gold’s inability to trade meaningfully above $1,350/oz and silver’s above $18/oz, over the past couple of years is the absence of the retail investor. Retail demand in the US has more than halved over the past decade and, in 2017, global retail investment demand in both gold and silver fell to levels last seen in 2009, and it remains in the doldrums. Meanwhile, gold prices have recently tested lows last seen in early 2017 and silver has tested early 2016 lows.

However, we note over the last ten years, retail investment demand has grown by more than one-third in Asia, led by more than a trebling of demand in China, and has been broadly stable in Europe. US gold retail demand is important because it is indicative of market sentiment, despite making up a small share of global demand; for silver, US investors accounted for 40% of global retail demand at its peak, and over 10% of total global demand.

US gold coin sales fell by two-thirds in 2017 and silver coin sales by half, to their lowest levels since 2007. For the year to date, gold is down a further 3% year on year and silver is down 29% year on year. Speculative positioning in gold has swung into net short territory and is at its lowest position since 2001, while net short speculative positioning in silver has hit record lows in 2018.

Physically backed gold ETF holdings are around one-fifth below their peak reached at the end of 2012, while silver holdings are around 10% shy of their peak reached only last year. While gold ETF flows have swung to net redemptions in 2018, silver ETFs are still up for the year to date. Gold tends to outperform when it garners support from broad-based investment demand. The broader investment picture has wilted over the past year, with the US retail investor continuing to take a backseat.

As geopolitical and political tensions escalate, gold’s safe-haven status continues to be debated. It could be argued that numerous risks should have reignited a flight to safety in gold; namely, risks surrounding Brexit and subsequent European elections threatening the status quo; imposition of sanctions on Iran; tensions across the Middle East and Korea; heightened trade tensions; and uncertainty surrounding the Trump administration. Instead, the US dollar has benefitted, and in turn weighed on gold.

Outside of the US, global tensions have been perceived as a significant but not a systemic risk, and not sufficient to threaten the global economy yet. Indeed, one-month implied volatility has tested record lows over the past couple of years. Meanwhile, gold has benefitted from localised demand, and the appetite to buy gold in countries such as Germany remains healthy and has grown over the past decade as new markets such as in China have been developed.

The Us Retail Investor View

Precious metals analysts have the opportunity to speak to a range of investors around the world, and US retail investors have been singing a different tune to the rest of the world for the past two years.

Individual investors and private wealth managers had assumed a much more upbeat view of the US economy compared to consensus and, on numerous occasions, investors called for much higher interest rates than the Fed funds futures curve implied. An optimistic outlook on equity markets led those who had a preference for natural resources to express their views through gold and silver stocks rather than the underlying commodity. Many individual investors found renewed political confidence in the Trump administration and felt little need to seek a safe haven. Coupled with range-bound gold and silver price action, and in some instances market saturation, investors shunned the refuge offered by precious metals. While cryptocurrencies dominated the headlines, there was little material evidence that it had cannibalised gold demand.

Our base-case scenario is that we are unlikely to see a recession in 2019 in the US. 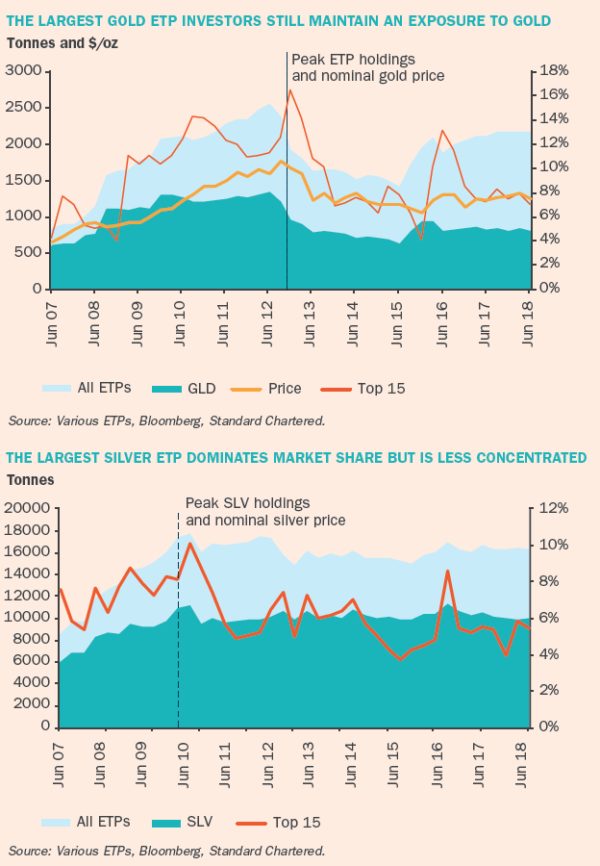 US silver coin sales and US retail demand both marked their strongest year in 2015, whereas US gold coin sales peaked in 2009, but US investor demand picked up in 2010 and 2016 according to MetalsFocus. Price expectations play a significant role in driving investment demand but so do the macro-environment and market conviction.

What happens next is likely to be driven by (1) the resilience of physical ETF holders; (2) the risk of recession; and (3) how gold fares in an environment of US interest rates above 2%.

How ‘Sticky’ Is The Resilient Investor?

The silver ETF investor has proved to be resilient even during periods of weak price performance, whereas gold ETF investors tend to manage loss-making exposure on a more timely basis. This is partly driven by the type of investor holding the two ETFs.

Silver ETF holdings have a greater share of retail investors than gold, where the majority are institutional investors. More than two-thirds of the silver ETF holdings were acquired at prices trading above $15/oz and holdings peaked in July 2017. Metal held in trust in the largest US (and the largest globally) ETF, iShares Silver (SLV), peaked in Q3 2016. However, a closer look at its prior peak when silver prices closed in on $50/oz in 2011 reveals the resilience of silver ETF investors.

The top 15 holders of SLV represented 10% of global silver ETF holdings and 18% of SLV in 2011. Those same holders maintain a 9% share of SLV today, but only 5% of the global market share. Two of the top 15 maintain a larger exposure to silver than they did seven years ago and four have exited their positions entirely. Overall, they maintain half of their peak exposure. Today’s top 15 holders represent 7% of global holdings and 12% of SLV.

In contrast, at its peak in December 2012, metal held by the top 15 investors in GLD, the largest gold ETF globally and in the US, represented 17% of global holdings and one-third of GLD. Today, these investors represent 7% and 19% of global and GLD holdings, respectively. Three investors maintain a larger holding today than they did at the peak and two have no exposure at all.

We can deduce two trends from this data. First, that the silver ETF has a lower concentration at the institutional level and emphasises the more retail-heavy exposure in silver. Second, and perhaps more importantly, the majority of investors still maintain some exposure to precious metals, albeit smaller in most cases, underscoring the resilience of ETF investors.

But Not All Investors Are Equal

While silver ETF investors are prepared to hold on to a loss-making position for longer, gold investors are more likely to liquidate loss- making exposure, suggesting an element of tactical positions. Notably, prices trading below $1,200/oz for the first time since early 2017 meant that more than 200 tonnes of holdings accumulated since the start of 2017 moved into loss-making territory, pressuring prices to the downside in the near term. 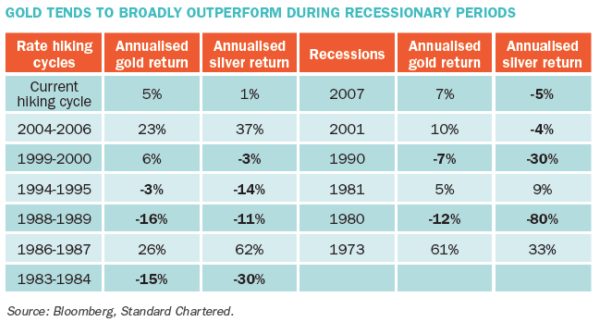 Will The Risk Of Recession Spark Renewed Interest In Gold?

There has been much discussion that an inverted US yield curve is a precursor for a recession. While gold has broadly tended to outperform during periods of negative growth (silver’s industrial exposure has resulted in a weaker price performance), our base-case scenario is that we are unlikely to see a recession in 2019 in the US. We forecast US GDP growth to slow to 2.6% in 2019 (from 2.9% in 2018), EUR-USD to close 2018 at 1.15 and 2019 at 1.20. We expect that US inflation will not rise much above 2% and the US Treasury yield curve will flatten to 0 bps by the end of 2018.

While market positioning suggests that a steeper US yield curve could be led by the long end, we think the curve will start to steepen only once the market believes the Fed is close to the end of its rate- hiking cycle and starts to hint at cutting. We believe the curve is likely to flatten/remain flat for the coming quarters, in turn suggesting a ‘steady as she goes’ economy and that less stimulus will be needed as conditions improve. However, the market is currently pricing in fewer hikes for 2019 than the Fed funds futures curve is implying, and anticipation that the hiking cycle is drawing to a close may be sufficient to reawaken retail interest in gold.

Can Gold Prices Gain Traction In A Rising Rates Environment?

Interest rates are still relatively low, but gold prices have gained upward momentum in an environment where the market believes the Fed will soon approach the peak of the hiking cycle. Escalating trade tensions have given cause for concern over rising inflation: while a 10% tariff could be absorbed by the market, a 25% tariff is likely to push inflation higher.

Gold tends to perform well as an inflation hedge if it is bought before inflation picks up and during prolonged periods of high inflation. In the 1970s and 1980s, gold consistently outperformed during periods when core PCE inflation rose above 5%, with annualised returns of 16%-24%. When core PCE reached 2%-5%, gold’s performance was patchier, with negative returns in some periods and strong outperformance in others. During periods when US CPI inflation rose above 2%, an average annualised return of 6% masked volatile performance ranging between -28% and +23%.

While the potential for the Fed to continue hiking in 2019 is a significant headwind to gold, the low US unemployment rate and rising inflation are supportive, perhaps more so if the Fed falls behind the curve and does not hike rates fast enough to keep pace with inflation.

Us Retail Investment Demand Could Turn A Corner Next Year

We maintain our positive outlook for gold prices and expect them to trade towards $1,300/oz over the coming months. The physical market should offer a better cushion for prices at more attractive entry levels, the Fed should enter the final stages of its hiking cycle and central banks remain net buyers of gold. We believe the drag from the strengthening US dollar should start to fade towards the end of the year and view the dollar as overvalued, with cyclical factors and global risk aversion providing support; therefore, it may not weaken until capital returns to emerging markets.

The scope for short covering activity poses an upside risk to gold and silver prices, given the extreme short positioning. Importantly, in our view, the US retail investor is likely to reinvest in gold as the low-hanging fruit in other markets dwindles, particularly if the US equity market softens and the market starts to anticipate a weaker US dollar and rising inflation. Indeed, gold coin sales have started to pick up, albeit from a low base.

Suki Cooper, Precious Metals Analyst, Global Research, Standard Chartered Bank. Suki is based in New York and covers the markets for gold, silver, platinum, palladium and other platinum-group metals, along with the key producing countries and consuming sectors. She joined Standard Chartered in 2015 from Barclays, where she spent 11 years, most recently as Head of Metals Research. Previously, she was a Chartered Accountant at PriceWaterhouseCoopers. She is a member of the Public Affairs Committee of LBMA, and regularly features in the media. She is an ACA Fellow of the Institute of Chartered Accountants in England and Wales.