The following is a truncated version of the speech which Rahul Mital delivered at the 2018 LBMA/LPPM Conference in Boston. It focuses on the impact of the auto propulsion system mix on precious metal usage in the future. This article complements the one by Dr Amanda Josey on page 29. 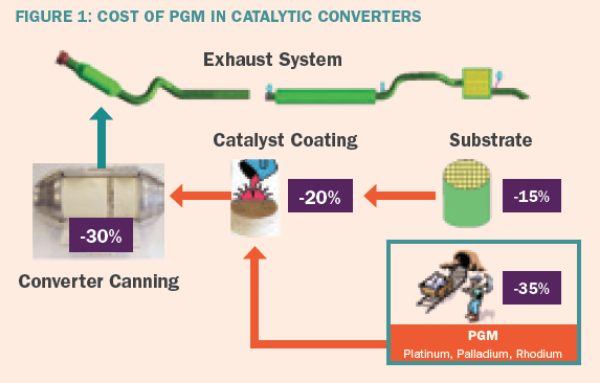 Legislated fleet emissions in North American are reducing every year, so there is increasing pressure on Original Equipment Manufacturers (OEMs) like General Motors (GM) to reduce tailpipe emissions. In addition to this, the OEMs have to comply with Real-Driving Emissions (RDE). GM is also in this performance-enhancement mode, where the focus is to reduce tailpipe emissions from its vehicles. GM’s average gasoline vehicle PGM usage is stable in the coming years (see Figure 2). Gasoline converters typically use a lot of palladium, some rhodium and almost no platinum. Globally, most OEMs use palladium and rhodium only in their gasoline converters. Through various engine and catalyst technology advancements, GM projects that it can hold the amount of PGM used in converters constant while achieving lower emissions in the coming years.

Figure 3 shows the GM PGM spend on precious metals. Two-thirds of the expenditure is on palladium. This is because GM sells more gasoline vehicles and gasoline catalytic converters use more palladium. GM’s diesel converter PGM usage is also holding constant in the coming years (see Figure 4) even though fleet average emissions are decreasing. The platinum to palladium ratio is about 50/50. Diesel converters typically do not use rhodium. As can be seen from the chart, GM diesel converters for model years 18 and 19 have higher palladium than other model years. The reason is that the typical development cycle for any new product is three to four years. When model year 18 and 19 products were being designed, palladium was less expensive than platinum. The shift to use more palladium was intentional at that time to reduce the cost of the system. The strategy did not work perfectly, because by the time these products went into production, the price difference between platinum and palladium had reduced. In fact, today, palladium is more expensive than platinum. Fortunately, GM was able to thrift out palladium for the coming model years. The current platinum and palladium price difference and the projected deficit of palladium are creating a lot of buzz. Everybody wants to know whether automotive industries can substitute palladium with platinum or other metals in their catalytic converters. Diesel converters are more prone to using platinum because of their lower temperature operation and nitrogen oxides reduction requirements. Gasoline converters on the other hand prefer palladium because it is more stable at the higher temperatures that the gasoline converters operate at. Platinum tends to sinter or coalesce at these temperatures. Nevertheless, platinum can be used in gasoline converters, but it cannot be substituted one for one with palladium and only a fraction of palladium in the catalyst technology can be replaced with platinum. More importantly, this change is not a flick of a switch for an OEM. Anytime GM wants to make a substitution like this, it is a one- and-a-half to two-year cycle. The team has to recalibrate, check for emissions, verify durability and evaluate diagnostics, etc. And while doing all this, there is no guarantee that by the time the vehicle is ready for production, the prices will not have flipped back. So PGM substitutions are possible, but they take time, resources and planning. 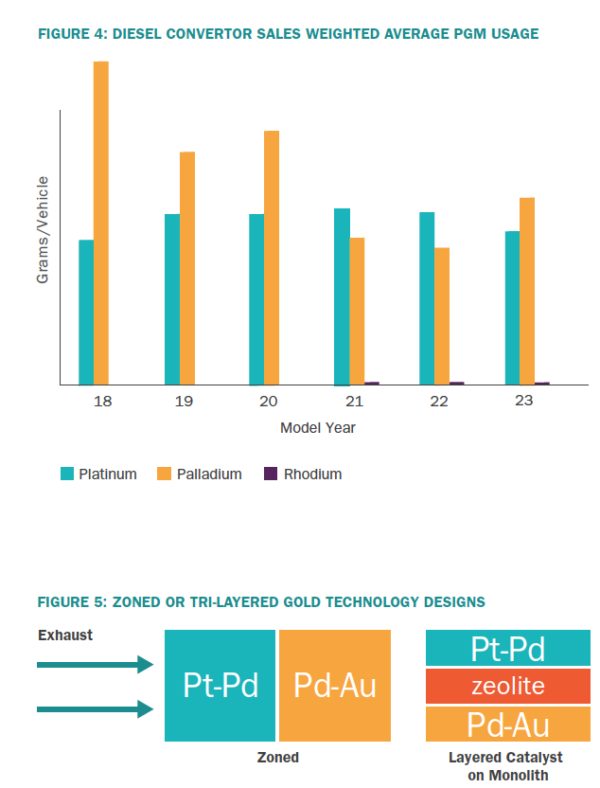 Gold As An Automotive Catalyst

Between 2003 and 2008, platinum was 40% more expensive than gold and there was a lot of interest to see if OEMs could substitute platinum with gold in catalytic converters, either partially or completely. Gold has been known as a good catalyst for a long time. But in the automotive industry, it is prone to sulphur poisoning, so efforts to put gold in catalysts have been limited. Gold’s melting point is lower as well, so it is less favoured for gasoline vehicles where the operating temperatures are higher. Even though it is not as efficient as platinum for the various oxidation reactions, it is feasible to use gold as a catalyst in diesel converters.

During this period when gold was cheaper than platinum, GM and other OEMs worked with many suppliers and actively looked into gold as an automotive catalyst. Suppliers alloyed gold with palladium to make it more stable. Then they added platinum in the catalyst wash coat to make gold more sulphur- resistant. Most of the final solutions that could be potentially used by the automotive industry ended up as tri-metals. Either it was a zoned catalyst or a layered catalyst. In a zoned catalyst, platinum was physically separated from palladium and gold by adding them in different sections of the catalyst. In layered catalysts, zeolite was used to separate the different functions. In all cases, gold was either at the end of the catalyst or as the bottom layer of the catalyst, so it could be protected from sulphur poisoning, sintering and hydrocarbon inhibition for carbon monoxide oxidation. But in around 2009, the price differential between gold and platinum reduced significantly, and for most OEMs, gold never went into production as an automotive catalyst. Today, gold is much more expensive than platinum, so there is no business case at all, but if gold ever became less expensive than platinum, there are off- the-shelf automotive catalyst technologies that could be used.

For this article, the point of interest is the impact of the automotive propulsion system mix on precious metal usage in the coming years. Electrification of automobiles is expected to grow with time. Already many ICE cars have e-assist or are mild hybrids, which have start/stop technology and regenerative braking. These cars basically assist the vehicle, but do not have an independent electric-only propulsion system. Extended- range or plug-in hybrid electric vehicles have pure electric propulsion systems, which then are supplemented for an extended range by ICE or some other propulsion system. However, all of these cars have an ICE, so they all use a catalytic converter. In battery electric vehicles (BEV), the engine is substituted with a battery pack and since there is no ICE, there is no catalytic converter. GM is investing in electrification extensively. It has different teams working on battery management and labs for different battery evaluations. More than half of GM’s propulsion system employees are working on alternative or electrified systems. GM is also actively working on fuel cell technology. Fuel cell vehicles (FCV) do not have catalytic converters, but the fuel cells themselves use precious metals. So, except for BEVs, all other cars will continue to use precious metals.

40% between 2003 and 2008, platinum was 40% more expensive than gold and there was a lot of interest to see if oems could substitute platinum with gold in catalytic converters. 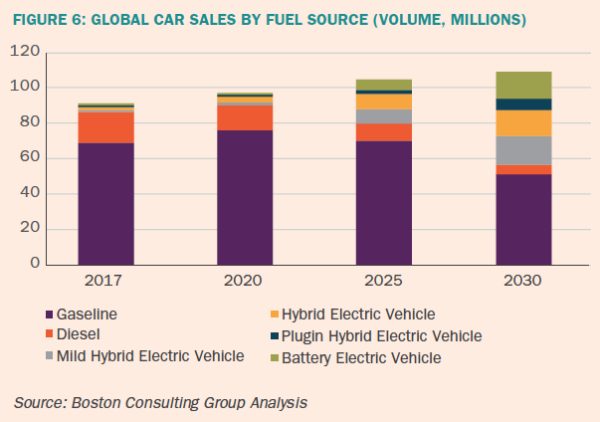 The key question is how will the automotive propulsion system mix change in the future? There are numerous predictions online. Boston Consulting Group (BCG) analysis shows that 93 million cars were sold globally in 2018. Future projections are that 109 million cars will be sold in 2030, out of which 14% will be pure electric or BEVs (see Figure 6). The rest will be either ICE only or mild hybrids and hybrids, which means electrified ICE cars. In summary, the projection is that by 2030, 86% of vehicles will still have an internal combustion (IC) engine in them and hence a catalytic converter. Doing the math, 109 million minus 14% is approximately 93 million, the same number of cars sold in 2018! So at least for the next 10 to 12 years, there will be no reduction in demand for IC engines and, hence, in demand for precious metal-based catalytic converters.

The growth in BEV sales is basically keeping pace with the growth in car sales and not impacting or cutting into the sale of IC engines.

Bloomberg, IHS Markit and many others give similar projections. The numbers may be marginally different, but the overall conclusions are the same as those of BCG.

Some projections include FCV sales of about one million by 2030. This may seem like a small volume, but since FCVs currently use more precious metal than conventional converters, their contribution to automotive PGM demand is not insignificant.

The general consensus is that more than 85% of passenger cars are still expected to have an IC engine and, hence, a catalytic converter by 2030. This implies no drop-in demand for converters for the next 10 years. But since a significant portion of the cars will be electrified, will the converters on those cars have less or more PGM than today? Sifting through the available information, data and online publications, cars with electrification will typically be certified to lower emission levels. That means the converters will potentially need more PGM to achieve those lower emission levels. Even hybrid cars that are certified to the same emission level are expected to have similar or slightly more PGM because the catalysts on hybrids typically run cooler and need more PGM to compensate.

As car sales increase in developing nations where emission regulations are becoming increasingly stringent, more PGMs will be needed for catalytic converters. In summary, PGM demand by the automotive industry is either expected to stay stable or increase marginally from now till 2030. In addition, PGM demand is expected to stay stable for the heavy-duty (HD) truck industry where diesels are prevalent. No propulsion system is expected to displace HD diesels for a long time. The emission regulations are becoming more stringent for the HD industry as well, which implies higher PGM usage. The bottom line is that, in the near term, the automotive propulsion system mix dominated by electrification is not expected to impact the PGM demand of the automotive industry.

Dr. Mital has a Bachelors from IIT, Delhi and PhD from Purdue University in Mechanical Engineering. As Global Technical Specialist, Dr. Mital is responsible for diesel aftertreatment system design, development and release for all GM diesel vehicles globally.