A truncated version of the speech which Rajesh delivered at the 2018 LBMA/ LPPM Conference in Boston. It focuses on the policies and initiatives introduced, or planned, by the Indian government, to transform the domestic gold market. 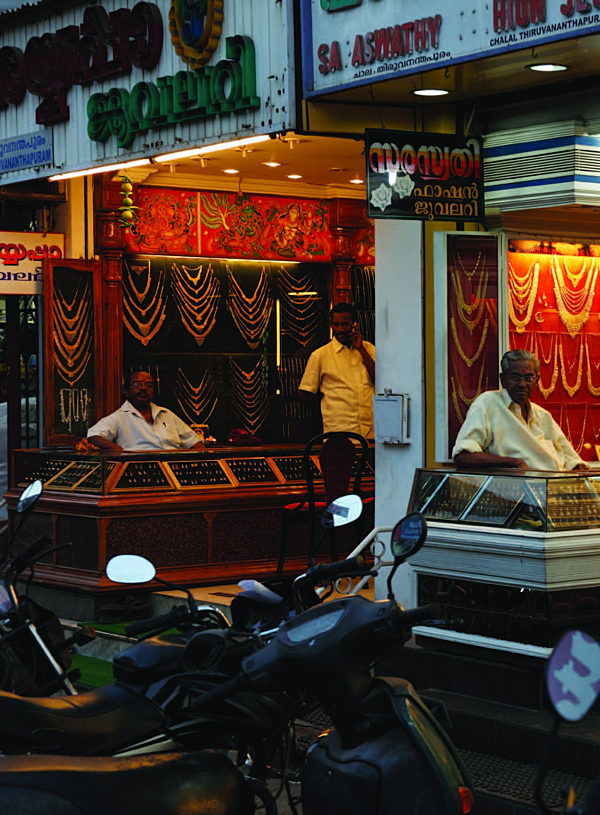 Those who have been looking at what is happening in India would have noticed that, in the recent past, the Government of India has significantly focused on black money and corruption. A significant contributor to these economic ills was a seriously misguided gold policy. If you recall, we had the Gold Control Act in 1962, with amendments in 1963 and 1968, the net effect of which was to kill the official gold market. Trade moved to smuggled gold and a huge black market for gold developed. This situation continued for close to 30 years.

We saw the beginnings of a transformation when India repealed the Gold Control Act in 1990 and liberalised the import of gold in 1997. Everyone felt that India had finally addressed its fixation on gold, until we walked straight into the global economic slowdown of 2013-14, which led to a massive current account deficit crisis. The Government response included rapid- fire increases in customs duty, a ban on domestic gold loans and the introduction of the infamous 80-20 rule. These restrictions were withdrawn late in 2014, except for the 10% customs duty, which still applies.

In 2015, we saw the beginning of a structured approach to transforming the gold market. In his budget speech in 2015, the Finance Minister announced three policy initiatives: a Gold Monetisation Scheme, a Sovereign Gold Bond and an India gold coin. Though well intended, these initiatives have met with limited success – just 7 tonnes of gold have been mobilised under the Gold Monetisation Scheme, 24 tonnes under the Sovereign Gold Bond and 800 kilos of the India gold coin were minted, of which 100 kilos remain unsold.

Undeterred and recognising the criticality and the untapped potential of the gold market, which provides a stimulus for exports, economic growth and, significantly, employment, in 2017, the Government instituted a Commission on Transforming India’s Gold Market. This task was given to NITI Aayog, the erstwhile Planning Commission, which produced the NITI Aayog Committee Report.

Continuing with a positive approach, the Finance Minister in his budget speech of 2018-19, the most recent financial year, made three significant statements. First, the Government will formulate a Comprehensive Gold Policy to develop gold as an asset class. Second, the Gold Monetisation Scheme will be revamped to enable people to open a hassle-free Gold Deposit Account. Finally, the Government will establish a consumer-friendly and trade-efficient system of regulated gold exchanges in India.

The NITI Aayog Report of 2018, released at the end of February 2018, provides the foundation for realising the policy intent of the Government. Significantly, it has taken the Government 56 years to publish a comprehensive and integrated document on gold; therefore, its implementation cannot be expected overnight.

A positive approach to gold does not necessarily mean pro-gold or pro-gold business policy, because policy considerations for gold in India grapple with multiple perspectives. Traditionally, jewellery provides safety and security for households as well as liquidity under difficult circumstances. It is significantly non-depreciating in its form. It is considered a safe-haven asset whose value will withstand crisis anywhere and, because of the huge demand for gold jewellery, gold is also a significant industry, with employment potential in a country like India, where unemployment is high.

From a macroeconomic point of view, however, since India does not produce gold domestically, the Indian economy will always have to pay for gold through exports or capital inflows, and therein lies the problem. Further, the industry is largely an informal sector and high customs duties encourage tax evasion, so there is a bit of a tightrope balancing act to be performed.

The policymaker’s task was made significantly less onerous when, in July 2017, the Government introduced a unified GST in the country. GST enables monitoring of gold import and domestic transactions, as well as encouraging formalisation of what is a highly informal sector.

MMTC-PAMP, in collaboration with the world gold council, has set up a precious metals assayer training institute in india. 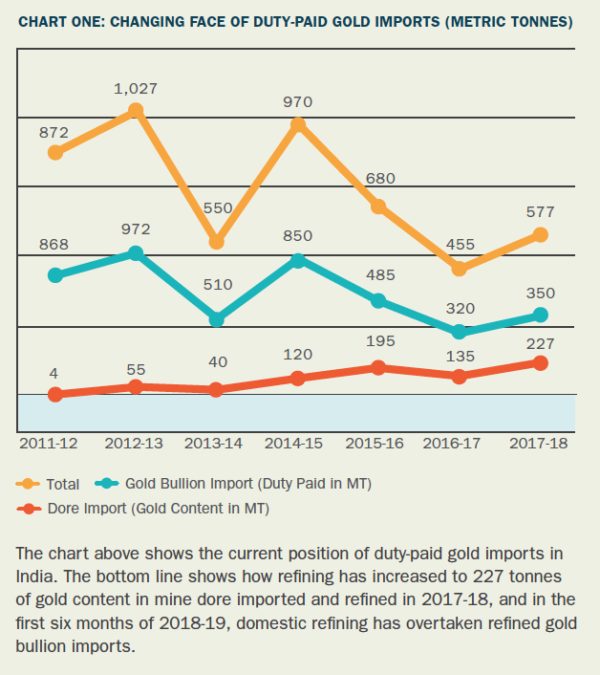 The report suggests a comprehensive review of the mining policy compatible with international practices. It would thus be reasonable to expect the Ministry of Mines to set up a separate wing to focus on gold mining in India, something India has successfully achieved in its hydrocarbons sector.

While it suggests reviewing the 10% customs duty and imposition of 3% GST, the report recognises that there may be financial considerations which may stand in the way of the Government doing so.

The report suggests reviewing policies for refining, to transform ‘Make in India for India’ into ‘Make in India for the world’. This includes developing an India good delivery standard along the lines of the LBMA Good Delivery standard. It notes the increasing trend in domestic refining using mine dore, which in the fiscal year 2017-18 accounted for almost 50% of India’s gold content imports. For the current year, I see 60% being refined locally, so is there here an invitation to move refineries from overseas into India? Perhaps India will finally see a two-way trade in gold.

There is talk of revamping the export of gold jewellery, with a higher focus on value added (and incentivising this). The Ministry of Commerce is working on these areas and announcements are expected soon. India is looking at mandatory hallmarking of jewellery, although there can be problems with the quality of the hallmark, due to technological obsolescence. The report also criticises the lack of adequate development of skills in this field for example, India does not have a formal training programme for assayers. Recognising this, MMTC-PAMP, in collaboration with the World Gold Council, has set up a Precious Metals Assayer Training Institute in India. The course content has been defined, infrastructure established, the training duration and certification norms identified and finalised, and the first batch of students commences training in January 2019. 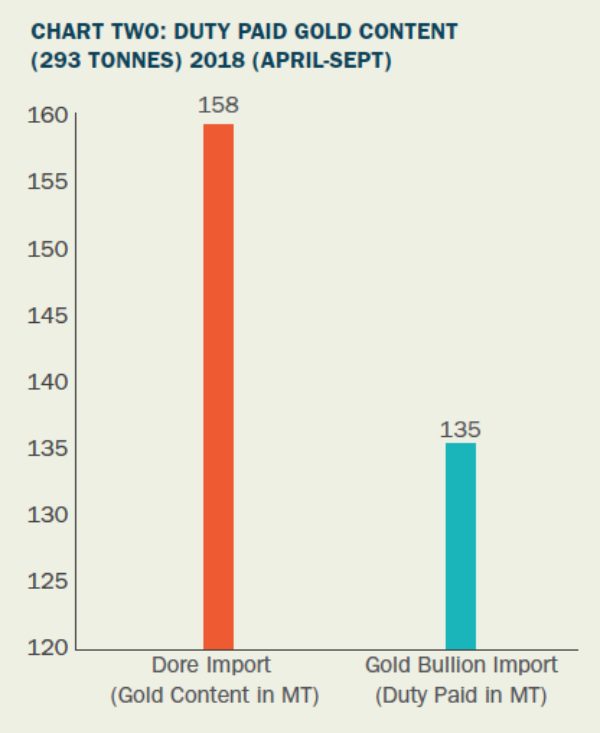 The chart above shows the current position of duty-paid gold imports in India. The bottom line shows how reﬁning has increased to 227 tonnes of gold content in mine dore imported and reﬁned in 2017-18, and in the ﬁrst six months of 2018-19, domestic reﬁning has overtaken reﬁned gold bullion imports.

Significantly, the NITI Aayog Report talks about a revamped gold monetisation scheme using technology as a key enabler. There is a debate going on currently amongst various regulators on simplifying the process for opening metal accounts so that a normal consumer could have a rupee account and a metal account in gold. Digital transactions, the structure around gold clearing and a gold clearing corporation may be seen in India, enabling jewellers and other entities to function as deposit mobilisation centres, and banks to treat gold as a quality liquid asset which they can either lend or sell as they wish. This is a work in progress. Overnight miracles cannot be expected but six to eight months seems to be a fair timeframe. Technology is the enabler, of course. 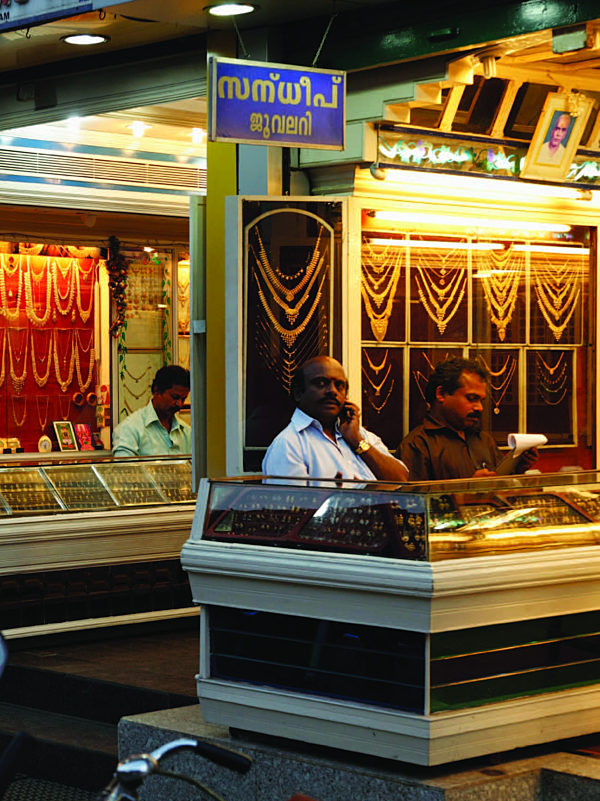 Fortunately for the government, MMTC-PAMP has a successful digital platform for gold, which may well be a starting point. The report analyses domestic gold loans to the jewellery sector and recommends the global practice of transacting gold loans in terms of physical gold, including ‘gold metal on loan’ monitoring and its settlement, all of which is eminently achievable once customers are encouraged to open metal accounts linked with existing rupee accounts. A variety of regulatory considerations have been highlighted and commented upon.

There is as yet no debate on according the India gold coin status as legal tender; hence, it will continue as a coin. There is considerable debate in the report regarding the proposed bullion spot exchange, an activity spearheaded by the World Gold Corporation. An industry group is working on this and an interim report is due next month.

The Ministry of Commerce has already initiated a dialogue for setting up a Domestic Council for gold, gems and jewellery. The report highlights setting up a Gold Board comprising various regulatory entities and ministries; however, I believe that will take more time to achieve.

While looking at all the positives and the transformation over a 56-year period from the Gold Control Act of 1962 to the NITI Aayog Report of 2018, policymakers will also have to reckon with global economic uncertainty and its impact on India’s economy. A depreciating rupee, a fluctuating oil price and increasing hydrocarbon imports should compel us to temper expectations with reason. Policymakers will surely have to take into accounts these factors. The silver lining as I see it is that we now have a comprehensive 250-page policy document report and knee-jerk reactions may well be a thing of the past.

Rajesh Khosla – Associated with the Indian precious metals industry for over twenty ﬁve years. He is widely respected for his in-depth knowledge and understanding of commercial realities of the Indian gold market value chain. Has pioneered a number of innovative schemes that seek to change the way bullion is understood in India.

He was Managing Director MMTC-PAMP India from its inception in 2008 till August 2017, when he stepped down on attaining the age of seventy-ﬁve. As Chairman-Emeritus he continues to advise and guide the company in its quest for sustained excellence in precious metals. He is also President, Association of Gold Reﬁneries & Mints (AGRM), and Director on the Governing Board of Indian Bullion & Jewellers Association (IBJA).

Having steered MMTC-PAMP India for LBMA Good Delivery accreditation, he is spearheading interaction between industry and Government. to establish an India Good Delivery eco-system with global acceptance. He is frequently consulted on policy issues related to development of the Bullion industry in India and is a frequent speaker on the subject at industry forums and conferences in India and overseas.