Having just released our annual Gold Focus 2019, Metals Focus has spent a great deal of time investigating the Chinese and Indian gold jewellery market in recent months. This exercise has given us confidence that 2019 is likely to see demand improve in both countries. Buoyed by a range of drivers, which will be discussed later, we forecast combined jewellery consumption across the two largest markets (together we estimate they account for around 60% of global retail sales) will rise by 4% or 48t this year. To put this in perspective, our projections for global consumption see only 50t of growth for 2019. 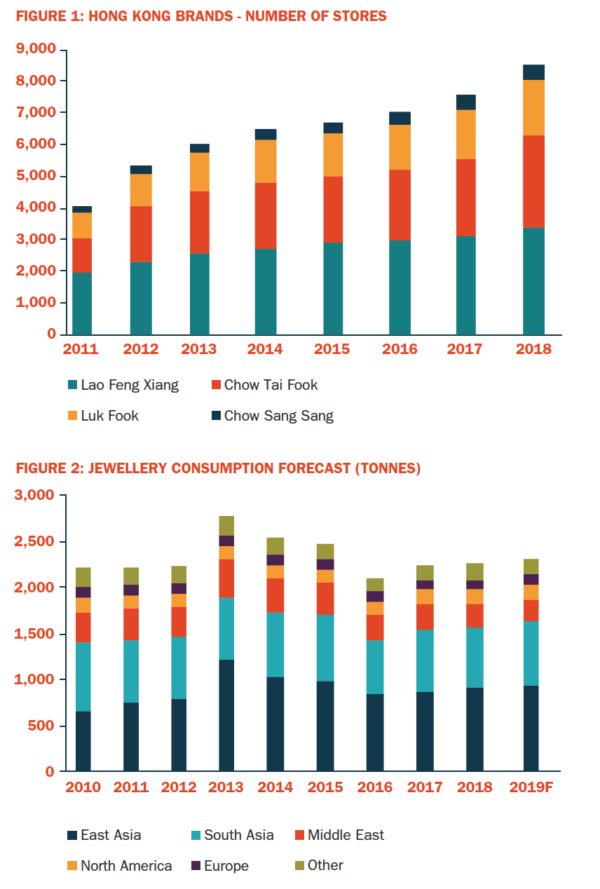 Looking first at China, consumption across the mainland has started the year on a positive note (see figure 2). Most of our contacts there report strong sales during the Chinese New Year festival and healthy levels of restocking following the holiday. We are also sanguine about the rest of 2019 and forecast consumption will rise by 3% to 758t, marking the third consecutive year of growth. Even so, the 2019 total will still be 27% lower than the 2013 peak, when the collapse in the gold price fuelled a huge wave of bargain-hunting.

A key driver behind the recovery that Chinese jewellery consumption has enjoyed in recent years is the local jewellery industry’s efforts to modernise and innovate. Manufacturers have developed new designs, alloys and production processes, expanding the range of products available. Meanwhile, retailers have focused their energy on branding, promotion and concept creation.

Through these efforts, China’s jewellery industry has strived to appeal to an increasingly younger, fashion-conscious and dynamic consumer base. This has not been an easy feat, given strong competition for consumers’ disposable incomes from other areas of discretionary spending. Travel, lifestyle, fashion and consumer electronics are typically higher priorities for younger consumers than jewellery purchases, in stark contrast to older generations who saw gold jewellery as both an adornment and an investment asset.

Among the new product assortments, we see in the market, a handful stand out. Perhaps the fastest growing, in percentage terms, is 3D printed, 24-carat ‘hard gold’ jewellery. Wax moulds are produced using a 3D printing process and are then electro-formed to create light hollow pieces in appealing designs.

‘Antique crafted gold’ is another extremely popular segment. This features traditional (for instance imperial or Buddhist) designs, with a matt finish and deep gold colour. High purity four 9s and five 9s gold jewellery are also on the rise, although part of this is at the expense of traditional 24-carat pieces.

‘Mirror gold’, featuring a smooth mirror-like surface finish, and ‘five good’ or ‘5G’, using a hardening process, are two other areas of 24-carat jewellery that are growing. Finally, K-gold, dominated by 18 and 22-carat purities, is also on the rise, helped by the wide range of colours and designs that manufacturers can achieve using different alloys.

Of course, a necessary condition for Chinese jewellery consumption to continue growing is that the country’s economic backdrop remains benign.

As such, continued uncertainty over trade tensions between China and the United States is a major concern. However, the Chinese authorities’ recent actions suggest a willingness to intervene with fiscal and monetary policy to support the economy. We therefore believe that, even if the outcome of trade negotiations is unfavourable, continued policy interventions will act as a mitigating factor. 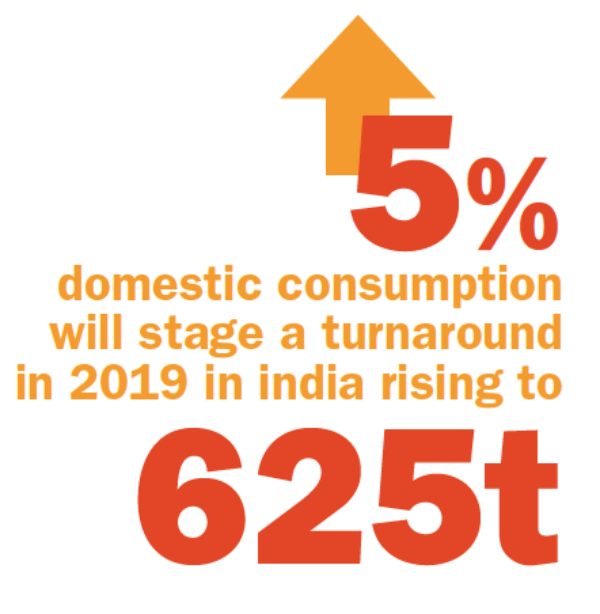 Turning to India, after a disappointing 2018, we expect domestic consumption will stage a turnaround in 2019, rising by 5% to 625t. A number of economic, political and market- specific factors are expected to fuel this increase.

Given that rural areas still account for some 60% of Indian gold jewellery demand, the government’s efforts to boost farm incomes, for instance through the increase of Minimum Support Prices for farm goods as well as direct cash transfers, should help consumption. More generally, recently announced fiscal stimulus, most notably the increase of the tax-free income limit to Rs 500,000, as well as ongoing infrastructure investment, should benefit demand across much of the country. 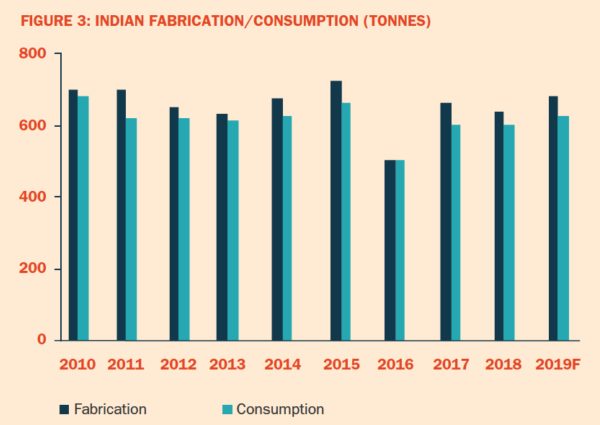 Furthermore, 2019 has a ‘natural’ advantage over last year in that there will be a lot more auspicious wedding days (approximately 90 in 2019 compared to 60-65 last year). Given that the bridal sector accounts for more than half of Indian gold jewellery consumption, we believe this will be an important factor driving growth in 2019.

What seems to be a highly probable win in the forthcoming elections for the ruling NDA coalition may also, indirectly, help gold jewellery. The recent rupee rally was, among other factors, helped by the markets’ reaction to polls, suggesting such a result is on the cards. Following such an election outcome, the rupee may well benefit further. In turn, this would put pressure on the local gold price and boost jewellery sales.

Even so, the outlook for Indian demand is not without some headwinds. Although looser fiscal policy will boost incomes, it will also fuel larger than previously expected deficits. This, coupled with the Reserve Bank of India’s (RBI) dovish stance, could end up offsetting any boost to the rupee discussed above.

The looming threat of an El-Niño weather system on agricultural output and, by implication, incomes should also not be ignored. Finally, although it is nowhere near as exposed as China to trade tensions, were they to intensify, India’s economy would too be affected, which would ultimately also hurt jewellery consumption.

Nikos Kavalis is a founding partner of Metals Focus.