In their latest 2019 Annual Silver Survey, GFMS report that industrial fabrication ticks down in 2018, while investment in silver bars and coins rebound, and mine production falls for a third consecutive year.

Filtering out the noise in order to lift out the major changes that characterised the industry last year, three main developments stand out:

In addition, scrap contracted as well, driven by the 8% decline in the average silver price, with fewer consumers incentivised to return their old jewellery and silverware items, pushing total supply down 3%.

As a result, the physical market balance reached a minor deficit of 29.2 Moz (908 t), which is approximately 3% of annual demand and, therefore, give or take within the boundaries of error, considered as a more or less balanced market. The small shortage was absorbed by metal made available from ETPs, which recorded net sales of 20.3 Moz (631 t) last year (only the third recorded net decline in ETPs this decade). A 38% net rise of exchange inventory build, however, pulled metal into the various global warehouses again, pushing the net balance to a deficit of 80.1 Moz (2,491 t) in 2018.

Silver mine production fell by 21.2 Moz (660 t) in 2018, the third consecutive yearon- year drop. The decline is attributable to the primary and lead/zinc sectors, mainly in the Americas, as Guatemala’s High Court suspended the mining licence of its biggest operation, while maintenance problems at Canada’s top producer negatively affected silver output by a combined 23.5 Moz (736 t). Partially offsetting the losses, India, China and Argentina’s silver production rose by a combined 8.8 Moz (275 t). We estimate that on a co-product accounting basis, Total Cash Cost + Capex decreased by 1.6% at a global level, averaging $10.37/ oz. The ramping-up of operations in Argentina, India and Mexico is expected for 2019, with global production anticipated to rise.

Global scrap supply fell by 2% last year to 151.3 Moz (4,706 t), with a drop recorded across all regions in North America. Supply from North America was slightly higher due to a continued robust economic climate that generated silver industrial waste. Other regions, however, countered that development, generated by lower silver prices, which reduced jewellery scrap returns from the market.

The global silver producer hedge book decreased by 2.8 Moz (88 t), leaving the delta-adjusted position at 18.7 Moz (581 t) by the end of 2018. The delivery into the hedge book was led by Nyrstar, followed by Industrias Peñoles and Harmony Gold. The producer community strongly favoured forward sales over options. 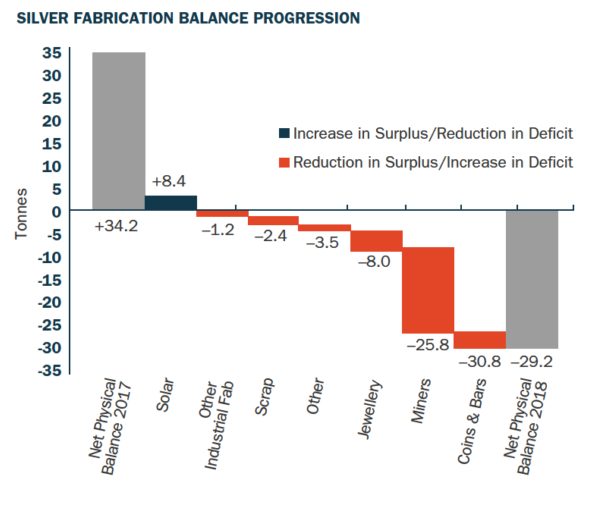 Total physical demand saw a 4% increase in 2018 to an estimated 1,033.5 Moz (32,146 t), a three-year high. A strong recovery from retail investment (bars and coins), plus further gains from jewellery and silverware, offset a slight contraction in industrial applications. The 1% decline in industrial demand was largely a function of a drop in silver used in photovoltaics (PV), with this fall offsetting modest gains in electronics and electrical, and brazing alloys and solders.

Global industrial off-take totalled 578.6 Moz (17,997 t) in 2018, a 1% decline from the previous year. A drop in silver demand from the photovoltaic sector accounted for the bulk of the decline as the market adjusted to reduced silver loadings in solar modules, with the lower figure from this sector masking some solid gains elsewhere.

Demand from the electronics and electrical sector rose for the second year in succession as did demand from the brazing alloys and solders sector, which hit a three-year high. Demand from photographic applications continued to retreat, while demand from EO was the largest casualty in this sector, falling by a fifth from 2017 volumes.

In 2018, silver demand for photographic applications slipped by 4% to 39.3 Moz (1,222 t). This prolonged long-term decline has seen demand from this sector fall acutely to now contribute just 4% of total demand. It would appear that demand has now largely stabilised and that current fabrication volumes may be largely sustainable, or at worst held to modest declines. Indeed, there are some industry segments that are having somewhat of a renaissance and may well deliver gains in the future.

Silver demand from the photovoltaic (PV) sector retreated in 2018, easing 9% to 80.5 Moz (2,504 t). While the market continued to advance (with global installations reaching a record high last year), silver used in this segment declined due to ongoing thrifting of silver loadings. China again dominated new installations in 2018, but a legislative change in May last year had an acute impact on domestic demand.

Silver jewellery fabrication increased for the second year in succession, rising 4% to an estimated 212.5 Moz (6,609 t). India was again the standout last year, with a surge in demand in the final quarter driving annual consumption 16% higher to a new record level. Elsewhere demand was mixed, with fabrication demand in the United States recording another annual rise (although the pace of expansion slowed from the previous year), while European demand dipped 3%. In East Asia, demand as a bloc was 3% weaker, dragged lower by declines in China and Thailand, offsetting gains in Indonesia and Vietnam as both markets continued to expand.

Global silverware fabrication increased for the second year in succession, rising 6% year-on-year to an estimated 61.1 Moz (1,900 t), a three-year high. India once again accounted for the bulk of the annual rise, increasing 10% year-on-year and accounting for more than two-thirds of global consumption.

Following a precipitous fall in 2017, coin demand eased 4% last year, dragged lower by sizeable falls in Oceania and North America. Meanwhile, bar demand jumped 53% last year to the highest level since 2016, with India accounting for the bulk of the rise, while ETP holdings retreated by 20.3 Moz (631 t) to finish the year at 649.5 Moz (20,202 t).

For the third consecutive year, silver coins and medal fabrication fell 4% to 82.6 Moz (2,569 t) last year. The drop was particularly pronounced in North America, where sales continued to be subdued on the back of a challenging retail purchasing climate, although numismatic and other coin sales increased substantially.