Lower global economic growth expectations, increasing tensions between the US and Iran, rumours surrounding further rate cuts by the US Federal Reserve and the ongoing trade war amongst the two largest economies are fuelling an optimistic scenario for gold prices. In this environment, gold miners are resilient to expand their hedge book in order to avoid capping the upside earning potential. 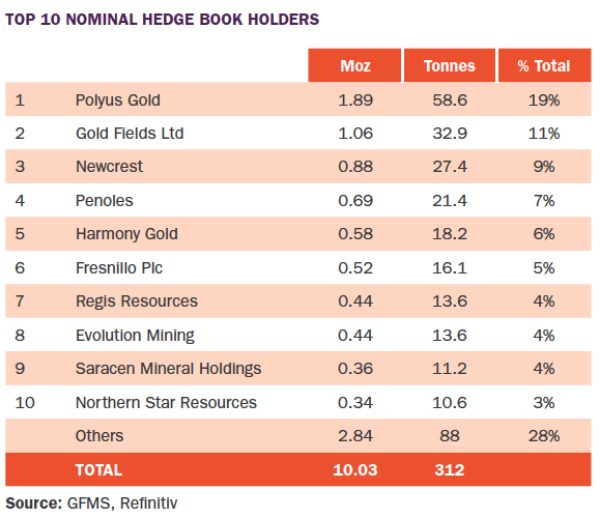 The delta-adjusted hedge book contracted by 0.8 Moz (25 tonnes) during Q1 2019, representing a 12% decrease compared to Q4 2018. As a result, the hedge book stood at a total of 6.24 Moz (194 tonnes) at the end of March. Our records show that during the last quarter, 30 companies took a net de-hedging position, while only 10 were net hedgers. Amongst the last group, the largest hedger was Gold Fields, after increasing its options and forwards contracts by 0.12 Moz (3.6 tonnes), mainly at its Australianbased operations. The company holds the second-largest nominal hedge book, totalling 1.06 Moz (32.9 tonnes). Other net hedgers include Harmony Gold and Resolute Mining, with a combined 0.08 Moz (2.6 tonnes). Hedging activity remains strong mainly in Australia, where the Aussie dollar has depreciated around 12% since January 2018, pushing companies to secure favourable gold prices in the local currency.

According to our estimations, over 45% of the total hedge book is represented by Australian-based miners, whose hedging has increased considerably over the last few years.

Turning to the net de-hedgers, Russian-based Polyus Gold has remained at the top for two consecutive years, as it continues to exercise its barrier options, which are part of the Strategic Price Protection Programme signed in Q1 2014. Polyus holds the largest nominal hedge book, which adds up to 1.89 Moz (58.6 tonnes), representing 19% of the global total. Further de-hedging activity was posted during the last quarter by Fresnillo plc, as over 0.17 Moz (5 tonnes) of options matured during this period, while Newcrest delivered 0.12 Moz (3.6 tonnes). The Australian company hedged a portion of Telfer’s production until 2023, locking in near record-high gold prices back in 2016.

The delivery schedule for the rest of the year is 2.38 Moz (74 tonnes), of which around 0.87 Moz (27 tonnes) are due to mature during Q2 2019. Even though some gold producers have already decided to increase their hedge books, the bulk of contracts during the recent months are relatively modest compared to historical data.

For example, Saracen Holdings added 0.05 Moz (1 tonne) of hedging at AUD$1,888/oz, though it delivered 0.07 Moz (2 tonnes) during Q1 2019. Resolute Mining, which has been an active hedging player during the past year, hedged an additional 0.06 Moz (2 tonnes), divided in equal parts both in Australian and US dollars.

In addition to the previously mentioned bullish sentiment over gold prices, mining companies are leaning towards other capitalisation instruments such as gold streaming, which also helps them avoid generating further debt. 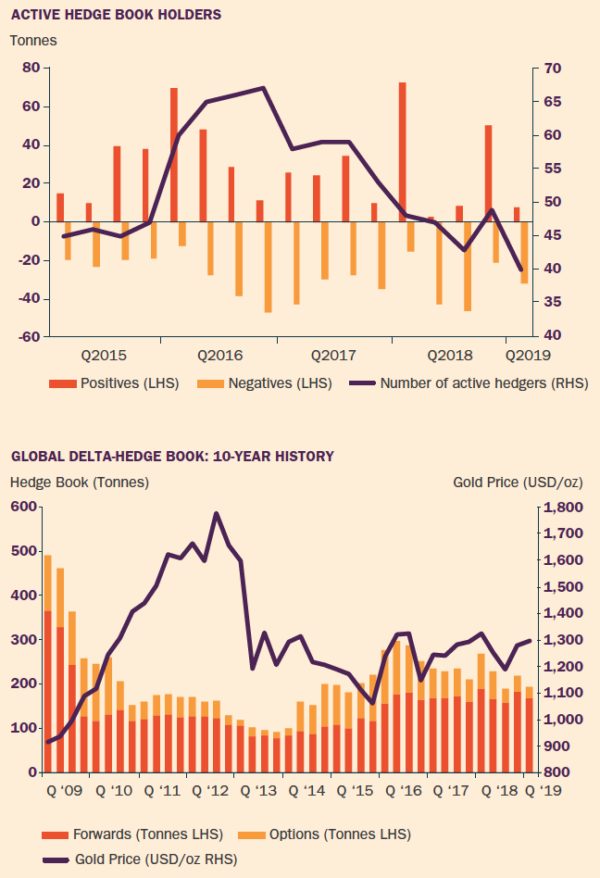 The sum of these factors is, in my opinion, taking producers’ focus off hedging. If we analyse the 10-year history regarding the global hedge book, on a delta basis, hedging virtually disappeared during the global economic growth period that followed the 2008 crisis, followed by a sluggish recovery at the start of 2014. After peaking during the Brexit referendum in Q2 2016, hedging has contracted by 2.6 Moz (83 tonnes) during the last three years.

After hitting a six-year high of US$1,438/oz, gold prices fell sharply following the resumption of trade talks and positive rhetoric between China and the US at the G20 summit, which took place in Osaka, stabilising afterwards at around US$1,400/oz.

While the scenario may change after the Federal Reserve unveils its strategy in the next few days, we at GFMS estimate that hedging will continue to contract during the next months, only recovering in Q4 as several Australian and Russian companies will reach a low hedge ratio (which accounts for covered production compared to the expected deliverable ounces for the period), possibly triggering new hedges.

Federico Gay, Senior Analyst, Refinitiv, GFMS. Federico is a geologist with a BSc from the National University of the South, Argentina. He joined Refinitiv in London in November 2019, focused on precious metals supply modelling. Prior to Refinitiv, he worked over seven years in Chile in a wide range of assignments, including exploration, ore control, geological modelling and resource estimation for a Copper-Gold-Molybdenum mine in the Atacama Desert. He completed a master’s program in Economic Geology The sum of these from the Catholic University of the North, Chile.