According to our preliminary findings, global mine production in the first half of 2019 was 1,642 tonnes, representing a 3.6% rise from the same period last year.

Over the last six years, only three quarters have posted year-on-year losses, while average growth during this period was 3.2%, supporting an upward momentum for gold production. Asia, the largest producing region, responsible for over a quarter of total global output, was the only region that reported losses, as production dropped by 24 tonnes following a significant output decrease at Indonesia’s Grasberg mine, where the transitioning to underground mine is severely impacting throughput.

We estimate production will slightly recover after the transition to the Grasberg Block Cave (GBC) is completed, during Q3. Also in Indonesia, further losses were posted at the Batu Hijau mine, due to a combination of lower grades and reduced operations following a fatal accident at the end of March. China’s output keeps falling, as production dropped by less than 1% from the same period last year; however, some recovery signs, specially within the smallscale mining sector, are starting to be reported.

At a regional level, the largest year-on-year gains were posted in North America, following strong results in US operations. The region added 12 tonnes to global production during the first half of the current year, compared to 2018. Elsewhere, Russian operations continue to improve their efficiency, while Polyus’s Natalka mine achieved full design capacity, supporting strong results in the European region, which, according to our findings, posted an increase of 8 tonnes from the same period last year. 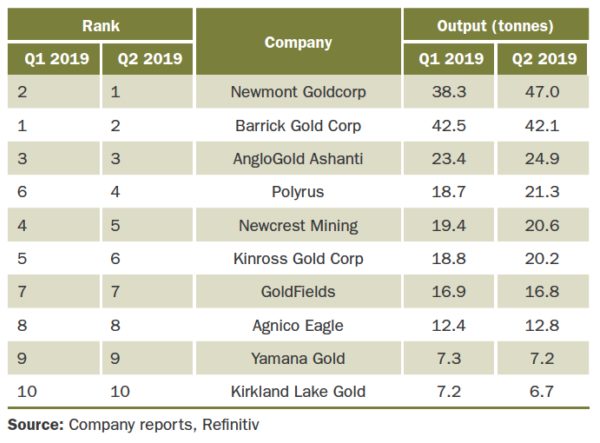 At a company level, recently rebranded Newmont-Goldcorp’s attributable gold output increased by nearly 16% during the first half of 2019, totalling 85 tonnes, therefore becoming the world’s largest producer during this period. Gains were posted at its Subika Underground, part of the Ahafo mine in Ghana, after achieving full operation capacity, and at Merian (in Suriname) and Yanacocha (in Peru) mines, after higher grades and higher recoveries were realised. Further increases were reported at Cerro Negro mine, in Argentina. Partially offsetting these robust results, production dropped at Boddington in Western Australia, due to lower ore grades, while a failure in the East wall of the Kalgoorlie mine in Australia led to higher strip ratio and lower grades, pushing gold production down by a staggering 37%, while considerably increasing costs.

After the merger with Randgold, the fulfilment of the Nevada Joint Venture with Newmont and the recent acquisition of Acacia Mining, Barrick continues to implement its new operational strategy, focusing on improving efficiency, while evaluating divesting some of its non-core assets. The company realised total production of 84 tonnes during the first half of 2019, therefore becoming the second-largest producer in the period. The company’s guidance production for 2019 is between 158 and 174 tonnes. AngloGold Ashanti’s production dropped by 5% from last year, with losses in its South African, Guinean and Argentinian operations. The company expects a stronger second half, specially at its Geita, Siguiri and Sunrise Dam mines, forecasting a total annual production between 101 and 107 tonnes. Polyus’s production increased 16% year on year, supported by higher recovery rates, higher mine throughput and better performance in all its operations. The Russian company is expected to produce a total of 87 tonnes this year.

Gold production in 2019 is expected to reach 3,407 tonnes, representing a 2% rise from last year. According to our estimates, output will continue to grow over the following five years, peaking in 2023, after which it will start declining by an average of 3% annually. Feasibility and pre-feasibility projects projected to come on stream in the following years are unlikely to add the gold necessary to counterbalance depletion at current operations. That said, an important factor to bear in mind is the latest Reserves and Resources statements from the largest companies, released in December 2018, which considered an average gold price of $1,200/oz.

If the metal price were to maintain a base level over $1,400/oz on a medium term, this might ‘unlock’ further reserves that could offset future losses. 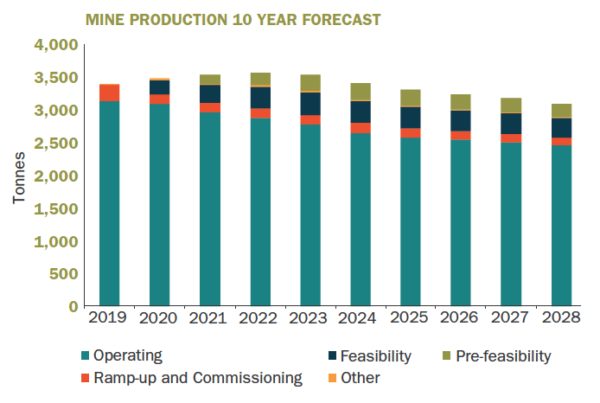 Another possible outcome is that the depletion curve will soften, as low-grade shafts and current loss-making mines might find new economical parameters favourable to continue operating.

We anticipate that more than 57 feasibility projects and 66 prefeasibility projects have a high probability of becoming a mine during the next 10 years. With 51 projects, Latin America is the region with the largest project pipeline, followed by North America, with 22. This shows the preference companies have for low-cost locations, compared to South Africa, which only has 1 new project with high chances of development. Russia and Australia also have an interesting selection of projects, including Polyus’s giant Sukhoi Log project, in Eastern Siberia, which is in the spotlight due to its size and geological characteristics, with over 1,960 tonnes of contained gold. Other interesting projects include Kalkaroo in Australia, Donlin Creek in Alaska and New Prosperity in Canada, and Brisas and Las Cristinas in Venezuela. The last, Las Cristinas, seems unlikely to feature in the 10-year prospects under review as it was expropriated by the Government in 2008 and has been in development limbo ever since.

Based on our forecasts, China, the world’s largest producer, will remain at the top rank for the next 10 years. The gap between it and Australia and Russia, however, will narrow, as these countries are both expected to post impressive growth rates. Of the top producers, Indonesia will face the largest output decrease, as a result of Grasberg’s open pit mine depletion (earlier this year, the operation switched to its underground mine, drastically plummeting mine throughput), followed by South Africa, in which high costs and increasing labour pressures are severely affecting gold production in the country. On the other hand, we anticipate that Russia’s, Mexico’s and Australia’s positions will strengthen on the road to 2028.

Federico Gay, Senior Analyst, Refinitiv, GFMS. Federico is a geologist with a BSc from the National University of the South, Argentina. He joined Refinitiv in London in November 2019, focused on precious metals supply modelling. Prior to Refinitiv, he worked over seven years in Chile in a wide range of assignments, including exploration, ore control, geological modelling and resource estimation for a Copper-Gold-Molybdenum mine in the Atacama Desert. He completed a master’s program in Economic Geology from the Catholic University of the North, Chile.