Is There A Place For Gold Equities In A Gold Allocation?

This is a revised version of the speech delivered by James at the annual LBMA/ LPPM Precious Metals Conference in Shenzhen, 13-15 October, 2019. 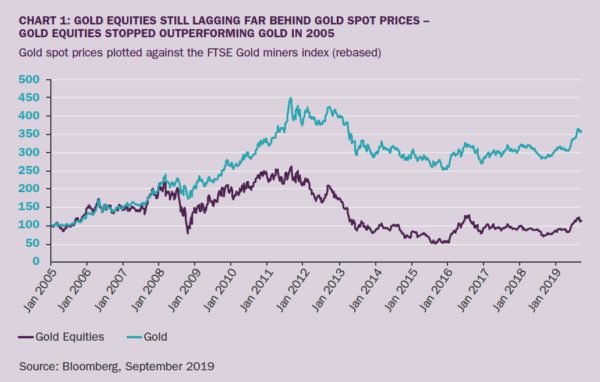 My presentation asks the question: is there a place for gold equities in a gold allocation? The reason I have posed this question is because, in absolute terms and, particularly disappointingly, relative to the gold price, investors have had very difficult experiences holding gold equities over the last 10 or even 20 years. Gold equities have not deserved their place in gold allocations and investors would have been better served staying well away. Has that changed? Are the gold producers facing a friendlier environment in which to capture margin and deliver on the promises they have made to shareholders? Can gold producer share prices finally start to outperform the gold price again? We think the answer is yes.

Gold Equities Versus The Gold Price: A Lost Decade Of Underperformance

There are honourable exceptions – companies that outperformed the gold price throughout that period, including some of the royalty producers and companies such as Randgold. However, in general, as a group, underperformance was extremely significant for a decade. Only since early 2016 have gold equities as a group started to perform better. Why was that performance so bad between 2005 and 2015. Why did the producers find it so difficult to capture margin?

To explain, it is helpful to break that 10-year period from 2005 to 2015 into three periods. It is a slight oversimplification, but there are distinct points to make about each of those three periods. In 2005 to 2008, gold prices were going up significantly, but gold prices were going up as part of a cross-commodity, global bull market. Gold prices were going up with risk, going up with emerging market assets and going up with emerging market currencies. What that resulted in was significant cash cost pressures across the industry. Strong cost inputs and strong producer currencies were obvious examples. But there was also competition for geologists and engineers, with other parts of the mining industry driving labour cost inflation aggressively higher. Overall opex inflation in that period was very strong and that materially eroded expected margins.

The period 2008 to 2011 was slightly different – we can think of it as the period of (and again, this is a generalisation) massive industry hubris. It was the period post the introduction of quantitative easing and unconventional monetary policy, where the industry really started to believe in a new paradigm and to believe that gold prices were going significantly higher. Forecasts of US$3,000/oz and even US$5,000/oz gold were common. The industry was also being fed that belief by investors, so the mantra was: “Growth.Growth at all costs.” It was essentially a case of borrow more, buy more, spend more and assume higher prices. Project capital in 2011, 2012 and 2013 essentially doubled versus2004, 2005 and 2006. 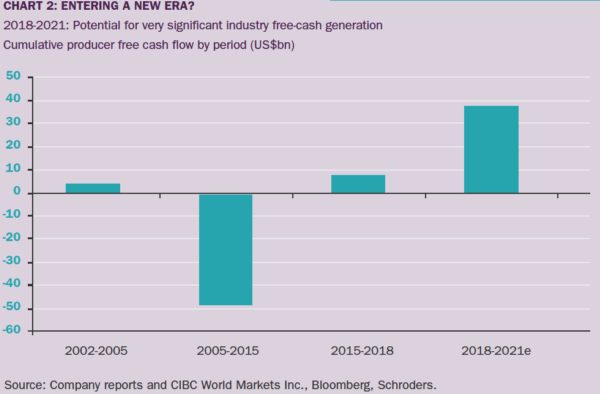 That period is when you started to see massive hubristic M&A, which was epitomised by the transactions in 2011.

Again, what did that mean? It meant that, yes, you might have had strong EBITDA margins in some cases, but on a free cash basis, your ability to actually generate free cash and certainly generate returns for investors was poor and far worse than originally forecast. No surprise then that gold equities again underperformed the gold price in this period.

The last period, 2011 to 2015, hardly needs describing. The industry arrived at the start of the bear market in gold and was looking in the opposite direction. The industry could not have been worse prepared for a bear market in terms of balance sheet leverage, having large capital projects to complete and having reserve bases calculated year after year based on higher gold prices. Gold equities fell by 70% in absolute terms over this period.

On a consensus basis, 2018 to 2021 is forecast to be a much healthier period for industry free cash generation, using the same index. Consensus expects $38 billion over the period, which equates to a high single-digit free cash yield across the industry as a whole. If that comes to fruition then I would argue strongly that the rerating potential for gold equities relative to the gold price, even if the gold price is flat or slightly lower than today, would be quite significant. 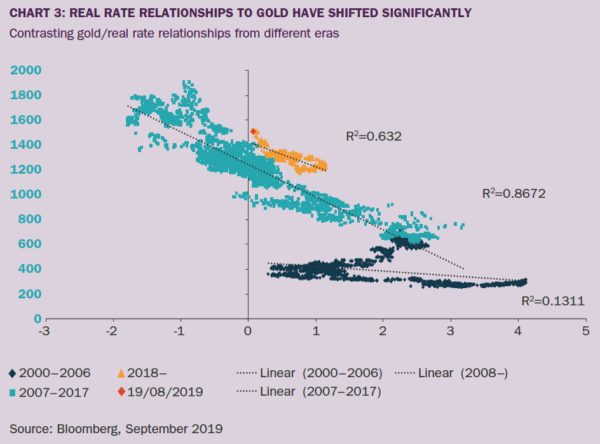 Will That Free Cash Be Realised Or Will The Producers Disappoint Again?

We can answer that question according to two types of factors: factors that management teams have control over and factors that management teams have very little control over. The factors they do have control over are primarily financial discipline and a returns focus – maximising existing asset bases, avoiding value-destructive M&A, embracing ESG. I think the feedback from the industry right now is clear. The majority of the companies we have met over the last few months, both at Denver and outside, are focused on deleveraging, generating free cash and moving towards a position to be able to increase returns to shareholders.

They are all still very afraid of overpaying for acquisitions and fear being labelled the ‘ill-disciplined child’ in the overall group.

From that perspective, we are quite confident that we are a long way from the exuberance and hubris of the pre-2011 years. No one is confidently and publicly forecasting higher gold prices, let alone basing strategy on them.

The area that gold producers will always find much harder to control is the cost environment. In the recent past, and particularly in the run-up to 2008 and 2011, as we described earlier, one of the issues was that because gold was rallying alongside the broad commodities spectrum – i.e. it was rallying with its own input cost base, emerging market FX, producer currencies and energy costs – and that margin cannibalisation was quite significant. We would argue that the gold rally we are seeing today is more a monetary based rally than a commodity-based rally.

We have a situation of elevated global debt, which is depressing aggregate global demand, which in turn is being irritated by global trade tensions. For me, that is an environment where you have quite a high likelihood that real interest rates will remain very low, and actually the aggregate commodity price deck could remain under pressure. This lack of broad cost inflation means producers have an opportunity to capture margin that is far greater than seen in the past.

If you believe there is a high possibility that real interest rates will head back towards -2%, the gold prices are likely to breach past records of $1,900/oz in the next couple of years

To what extent have gold equities already priced in this more optimistic environment? Hardly at all. On a free cash yield basis, a multiple basis (we use EV/EBITDA here) and a price-to-book basis, gold equities remain very depressed relative to history. The industry is also, step by step, being more cautious from a balance sheet perspective as free cash generation comes through. Major producer CEOs are still talking about deleveraging further. One said to us quite explicitly that if he could run his business net cash then why would he not? Historically, companies that have had net cash balance sheets have not necessarily been the ones that have generated poor returns, even in rising gold price environments. Leveraged balance sheets have not generated good returns to shareholders in the past, especially through the cycle.

Gold Is Trading As A Monetary Asset Not As A Commodity

To finish on gold prices, it is important to reiterate our view that gold is trading much more as a monetary asset, as money, than as a commodity. Chart 3 above shows US real interest rates against gold prices. Looking at the early 2000s, you can see that the relationship between gold and real rates was on average very weak and, in some cases, the opposite to what you would expect.

The relationship got much stronger post 2008 after the introduction of unconventional monetary policy. We would argue that, today, real rates remain the dominant driver of gold prices.

Where could gold prices get to? If you believe there is a high possibility that real interest rates will head back towards -2%, the gold prices are likely to breach past records of $1,900/oz in the next couple of years.

The end of policy normalisation attempts by the US monetary authorities, heightened recession risks, the probability that the next downturn will be met with some form of combined monetary/fiscal stimulus – these factors all point towards deeply negative real rates.

The data on ETF holdings supports the idea of real interest rates as the dominant driver. I think it is interesting to note that if you break out the ETF data for Europe and the US, you can see that in Europe, at the point in which European real yields – Germany in this case – started to go very negative in late 2015 and into 2016 was the period that European ETF inflows started to really accelerate, doubling from 600 tonnes to 1,200 tonnes over the period.

For the US equivalent, we see clearly that in 2016, 2017 and 2018, US real interest rates did very little, because the US economy was going through a period of US exceptionalism, essentially relatively strong economic data, good equity market returns and positive real interest rates, which meant investors just did not feel they needed to be invested in the gold space at all. Now that that has changed recently, you have seen a corresponding aggressive pick-up in US-based ETF buying.

Just to summarise, I think that, relative to the history, gold equities are in a much better position today to capture margin and to generate free cash flow and returns to shareholders, both from things they can control, i.e. financial discipline and the psychology of management teams, but also because of the macro nature of the gold price rally, which suggests to me that gold prices can be strong over and above the underlying cost base.

James Luke is the Co-fund manager of Schroder ISF Global Gold. He joined Schroders in August 2014 and prior to that was co-Head of Metals Research at JP Morgan. He graduated from Oxford University in 2002 with a BA in Modern History.