The Gold Exhibition at the National Museum of Ireland (NMI)

An exhibition of gold artefacts from the most significant prehistoric gold collection in North West Europe. 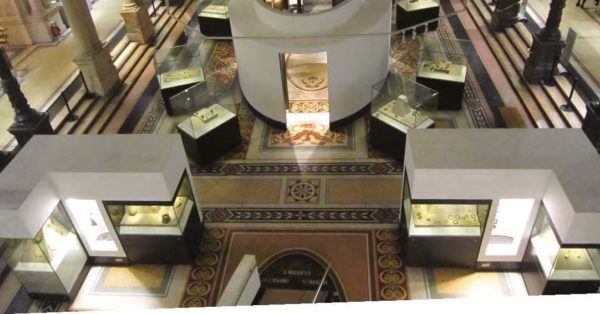 An exhibition of gold artefacts from the most significant prehistoric gold collection in North West Europe.

Valuable, rare, enduring and glittering – these are all words which we associate with gold. Since the dawn of time, gold has been highly prized and regarded as special. It has distinctive qualities – it does not corrode and is malleable – which makes it easier than other metals to work with. In the past, it was thought to have magical, talismanic and cosmological properties. The Bronze and Early Iron Age periods, which extend from ca. 2500 BC to the first century AD in Ireland, are regarded as being the richest, most creative and productive periods in Irish prehistoric gold-working. The National Museum of Ireland has the largest and most significant collection of prehistoric gold in north-west Europe in its collections.

The Prehistoric Gold Collection In The NMI

All the gold artefacts in the collection have Irish provenances and are known to have been manufactured in Ireland. Although they were produced in Ireland, they display influences from Britain, North West Europe and Iberia, which demonstrates the commercial and cultural connections between Ireland and the rest of the North West of Europe in prehistory. The history of the gold collection predates the foundation of the Museum itself. The Museum of Science and Art, later the National Museum of Ireland (NMI), was founded in 1877 by Act of Parliament and first opened its doors to the public in 1890. The Museum was built to house the collections of the Royal Dublin Society and the Royal Irish Academy, which included the Academy’s important gold collection. Since the Museum was opened, the gold collection has grown. 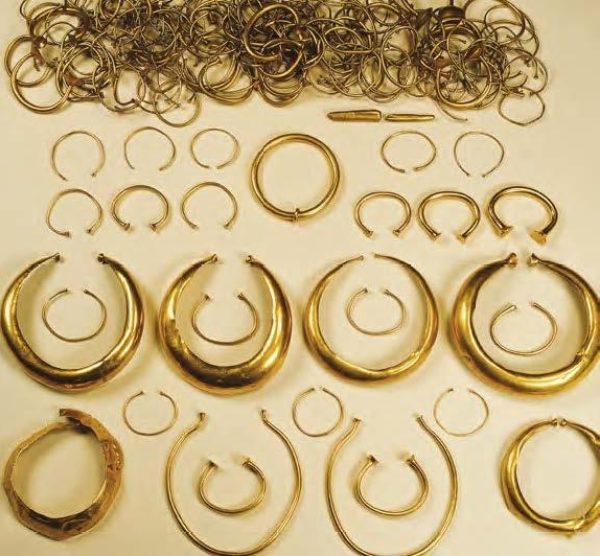 The Mooghaun hoard © The National Museum of Ireland

The artefacts in the NMI prehistoric gold collection were most frequently discovered as chance finds – usually during farming activities, peat harvesting, or construction works. Very few artefacts have been retrieved during archaeological excavations. The earliest record of the discovery of Bronze Age gold is preserved in a manuscript in Trinity College Dublin. It documents the discovery of a gold hoard in Ballymacmorrish in Offaly in 1670.Unfortunately, the present whereabouts of this hoard is unknown. The artefacts were most likely to have been melted down and recycled. Such was the fate of so many ancient gold artefacts. The Mooghaun hoard was discovered in 1854 and would have weighed well over 5kg. It is estimated to have contained 150 Late Bronze Age gold artefacts – bracelets, collars and torcs. Today, only 34 of the original artefacts survive and these are on exhibition along with 19th century replicas of some of the lost artefacts. Most of the objects in the hoard are presumed to have been melted down, although some may still survive in private collections with the knowledge of their provenance having been long since lost. Fortunately, legislation is now in place to prevent discoveries of ancient gold artefacts being melted down or sold on the black market.

The most recent addition to our gold collection are the four magnificent solid gold penannular rings found in 2018 during drainage works in Tullydonnell in Donegal. Analysis of the elemental composition of the gold rings most likely date them to the Late Bronze Age or Bishopsland phase (ca. 1000 BC). In total, they weigh 4kg and have been interpreted as bullion rather than finished artefacts. They are evidence of the great wealth of the Bronze Age community in this isolated corner of North West Europe. 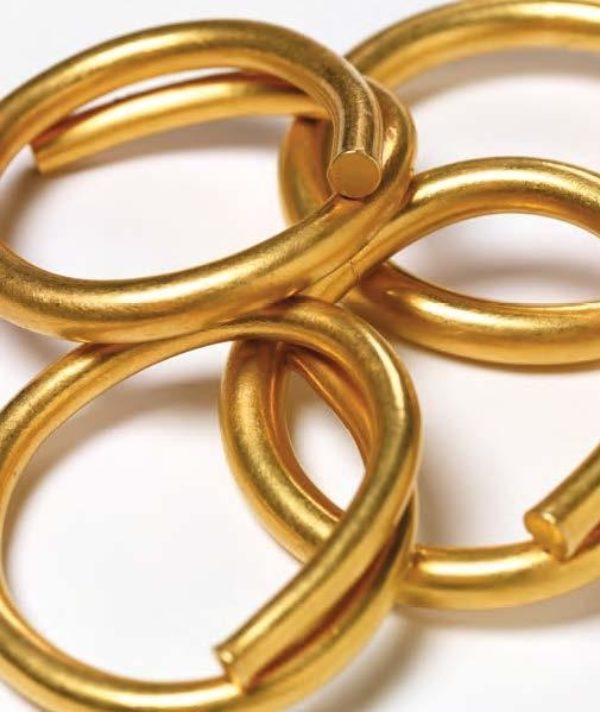 The Tullydonnell hoard © The National Museum of Ireland

There is no admission fee into the exhibitions at the National Museum of Ireland. On entering the exhibition space from the main reception area in the Museum, a visitor is dazzled by the gold artefacts on display in the ÓR exhibition in the central court (ór is the word for gold in the Irish language). There are close to 700 gold artefacts in the NMI’s prehistoric gold collection, most of which are Bronze Age in date, and 342 of these are on exhibition. The exhibition also includes specialised metal-working tools of bronze and stone, which would have been used in the manufacturing of the gold artefacts. Examples of pottery bearing the same decorative motifs are also on display as are amber and jet necklaces and torcs, bracelets and pins artefacts made from bronze and/or covered in gold foil. In 2017, the exhibition was revamped to include recent finds, such as the gold button cover found during archaeological excavations in Mucklagh in Offaly, and to add information from recent research.

The gold exhibition does not have audio-visual displays or interactive aids; instead, the focus is on the artefacts themselves. The information provided on the accompanying information panels is accessible to visitors of all ages. Information is also available on the Museum’s website. The layout of the display cases showcasing these magnificent artefacts is arranged chronologically from the Beaker period and Early Bronze Age to the Early Iron Age. The oval area located in the centre of the exhibition focuses on the history of the collection. It also displays information and exhibits artefacts associated with the procurement of the gold from alluvial deposits. Over the years, there has been much speculation and research carried out to identify the source of the Irish Bronze Age gold. In the past, the main source of the Irish Bronze Age gold was thought to be in Croghan Kinshelagh Hill in Wicklow. Chemical analysis carried out in the last decade identified the Mourne Mountains in Northern Ireland as the most likely source. Recent isotopic analysis has shown that the source of the Early Bronze Age gold artefacts was probably located in Cornwall as the isotopes of the Cornish gold and the Early Bronze Age artefacts are similar. However, the location of the source of the gold for Later Bronze Age artefacts has still to be determined. 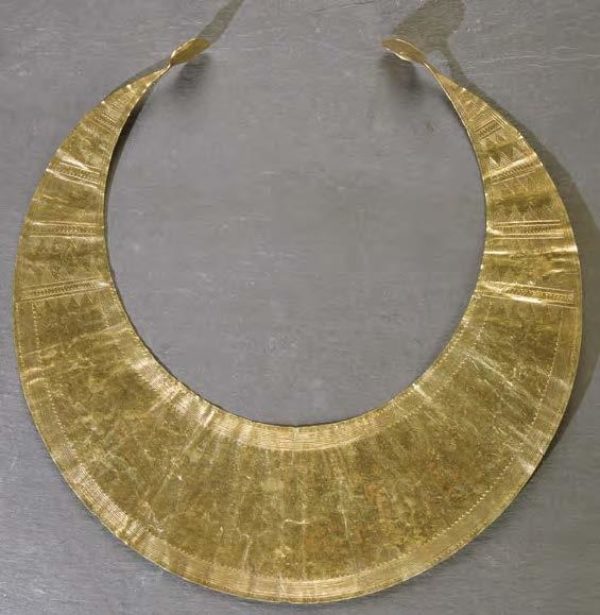 The Drumbanagher Lunula © The National Museum of Ireland

Visitors are presented with display cases containing the very fine but fragile lunulae (collar/neck ornament), gold discs, earrings and plaques. The number of lunulae and gold discs from Ireland are significantly higher than from Britain and the rest of Europe. This demonstrates that Ireland was an important manufacturing centre for gold artefacts in North West Europe in the Early Bronze Age. All the gold artefacts were manufactured from thin sheets of gold. The gold sheets were produced by gently, skilfully and patiently hammering ingots of gold alloyed with small amounts of silver and copper. The artefacts are decorated with incised or repoussé decoration composed of symmetrically arranged geometric motifs – lozenges, circles, zig-zag, lattice patterns.

There are close to 700 gold artefacts in the NMI’s prehistoric gold collection, most of which are Bronze Age in date, and 342 of these are on exhibition 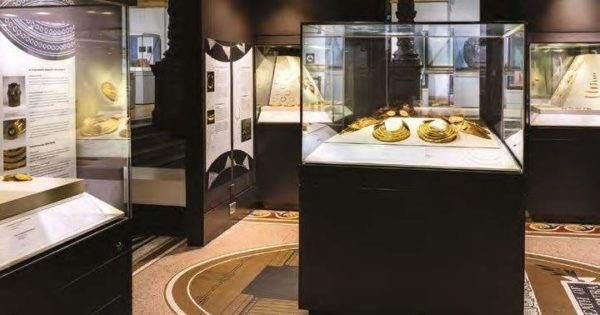 View of the exhibition space © The National Museum of Ireland

In Ireland, Bronze Age gold artefacts are not usually found in funerary or settlement contexts – they are, with a few exceptions, isolated finds. Their deposition is usually considered to be ritual in nature or for safekeeping to be retrieved later. As they are mostly isolated finds, interpreting their exact function is quite difficult. However, the decoration on the lunulae and gold (or sun) discs is quite obviously of symbolic significance. Mary Cahill has reinterpreted the lunulae (the plural of ‘little moon’) as possibly representing solar boats and has identified the decoration on the bases of Early Bronze Age ceramic bowls as solar imagery. So, the Early Bronze Age gold artefacts do not seem to be personal ornaments but were more likely to be regalia worn either by a powerful political or religious leader during important ceremonies and rituals.

This next section in the exhibition explains the new technologies in gold-working and the change in the artefact types being produced by 1200 BC. During this period, torcs and solid penannular bracelets were the principal types of artefacts being manufactured. While the use of sheet gold to manufacture gold artefacts does continue, we now also see the introduction of new production techniques. Gold bars are formed into bracelets, and bar torcs and twisted torcs are made using warm and cold annealing and anticlastic techniques. The most impressive of these artefacts of this period on display are the twisted torcs found on the royal site of the Hill of Tara in County Meath. The largest Tara Torc measures 42cm in diameter and if untwisted would extend to 167cm.

The torcs are too large to be worn as a personal neck ornament and it has been suggested that they were worn around the waist. Clearly, they were intended to impress and would have had a significant role in ceremonial rites.

By 800 BC, there was a remarkable expansion in the range of gold artefacts being manufactured. These new items include gorgets (collars), ear spools, lock-rings, bullae, hair-rings and gold beads made from sheet gold, and solid gold dress and sleeve fasteners. They demonstrate that the Late Bronze Age in Ireland was a period of great wealth and technological innovation – gold wire and gold rivets were now used to stitch together elements of composite artefacts such as the gorgets. Mary Cahill’s recent study of the gorgets suggests that they may have been worn as a type of stylised ceremonial cuirass (sheet-metal armour/corset).

Cahill also looked to ethnographic sources to find parallels for the gold boxes and discovered that their similarity to the ear spools worn by the Maasai tribes was so remarkable that the gold boxes have now been reidentified as gold ear spools.

Unfortunately, the function of the majority of the gold artefacts cannot be explained. The object names assigned to them – hair-rings, dress and sleeve fasteners, to name a few – are mostly antiquarian in origin and are based on what they appeared to resemble in more modern times.

A display case containing ribbon torcs is a recent addition to the exhibition. Previously, ribbon torcs were considered to be Bronze Age in date; however, analysis of the some of the ribbon torcs in the NMI’s gold collection showed that they also contain traces of platinum, which is more consistent with the elemental composition of Iron Age gold.

The gold exhibition celebrates the Golden Age in Ireland’s prehistory and is one of the most popular exhibitions in the Museum. These intrinsically beautiful artefacts display the exquisite work of the master goldsmiths in the prehistoric period in Ireland and they reflect the prestige, power and wealth of the Bronze Age and Iron Age societies. They have inspired modern gold-workers and some of their pieces are available for sale in the Museum shop.

Thanks are due to Richard Weinacht NMI photography department for all photographs provided in this article.

Sharon Weadick is the Assistant Keeper, Irish Antiquities Division, at the National Museum of Ireland. She has a MSc (1:1) in Experimental Archaeology and Material Culture from University College Dublin. Since 2017 she has worked in the NMI as curator of the Bronze Age Collections. Prior to this she worked on a project cataloguing the IAD collections which contains several million objects. Her areas of interest include Early Bronze Age pottery and funerary practices and ancient metal-working. She has also worked as research archaeologist on the excavations of the Cliff-fort of Dún Aonghasa on the Aran Islands.