The problem, of course, is not the Covid-19 pandemic directly, but the resultant closing down of business activity in order to prevent the spread of the virus. In economic parlance, this is both a demand and a supply shock. On the supply side, many businesses simply cannot operate in this environment, even if there is demand. On the demand side, consumption has ceased for many services such as entertainment and tourism, and shifted towards health services and those goods that can be ‘consumed’ in lockdown. No one knows when or how quickly the economy will recover, but the success of the various stimulus and support packages will only become evident over time. The business and financial world is likely to be permanently changed, as the crisis accelerates underlying trends from the social, such as informal dress, to the greater efficiency from reduced travel and more virtual meetings.

In this time of uncertainty and tragedy, it may seem parochial to focus on the role of precious metals, but that’s why we are here. All markets have been turbulent and that includes precious metals. The many different elements of gold – from mining through to trading – have all been disrupted. But the market has largely been able to continue operating, despite shutdowns and home working for some. London vaults and benchmark auctions have kept operating, there has been sufficient refining capacity and dealers have been trading remotely.

Gold has been in high demand, with record volumes recorded in the LBMA Trade Data in early March. The biggest challenge on the supply side has been logistics, with the difficulty of getting gold in the right format, to the right place, at the right time. Such concerns contributed to the price action that saw CME prices – backed by 100oz bars held at the exchange – dislocate from the loco London market, which is underpinned by 400oz bars.

A crisis is always likely to reveal the weakest links in the chain and some of these issues will bear strategic review of whether market requirements on format and location can be eased – temporarily or even permanently – for the benefit of the market as a whole. CME has already introduced a new contract, which includes backing by 400oz bars. Other changes need to be at least considered.

The most interesting aspect perhaps has been the performance of the gold price during a credit crisis and what its behaviour has told us so far. In the early days of uncertainty, all safe assets were in high demand – US and UK government bond yields fell, and gold (LBMA pm price) rose to $1,683/oz on 6 March. Then, falls in other asset prices caused a squeeze in which cash became king, reflecting factors such as margin calls and stop-losses. In this short period, many markets became illiquid and the best way to raise cash was to sell the safest and most liquid asset. US Treasury bonds fell in price, and gold fell to $1,474/oz on 19 March. Paradoxically, this shows gold at its most valuable – in a credit crisis, it is one of the few assets that is liquid enough to sell to raise cash.

Once that squeeze was over, all safe assets returned towards their previous highs and gold reached $1,741/oz on 14 April.

It is remarkable how closely gold has mirrored the performance of the 10-year US Treasury bond (adjusted for implied inflation) as shown in the chart. Similar correlations hold between gold and gilts. And all of this on the back of record volumes. As I write, the gold price continues to be strong, but as one would expect given its status as a hedge against risk, is varying inversely with the prospects for global recovery.

Going forwards, LBMA will be looking in depth to learn from what has happened. And we will be keen to initiate improvements to market efficiency and resilience, and so underpin the role that gold plays as one of the safest and most liquid assets in a crisis. 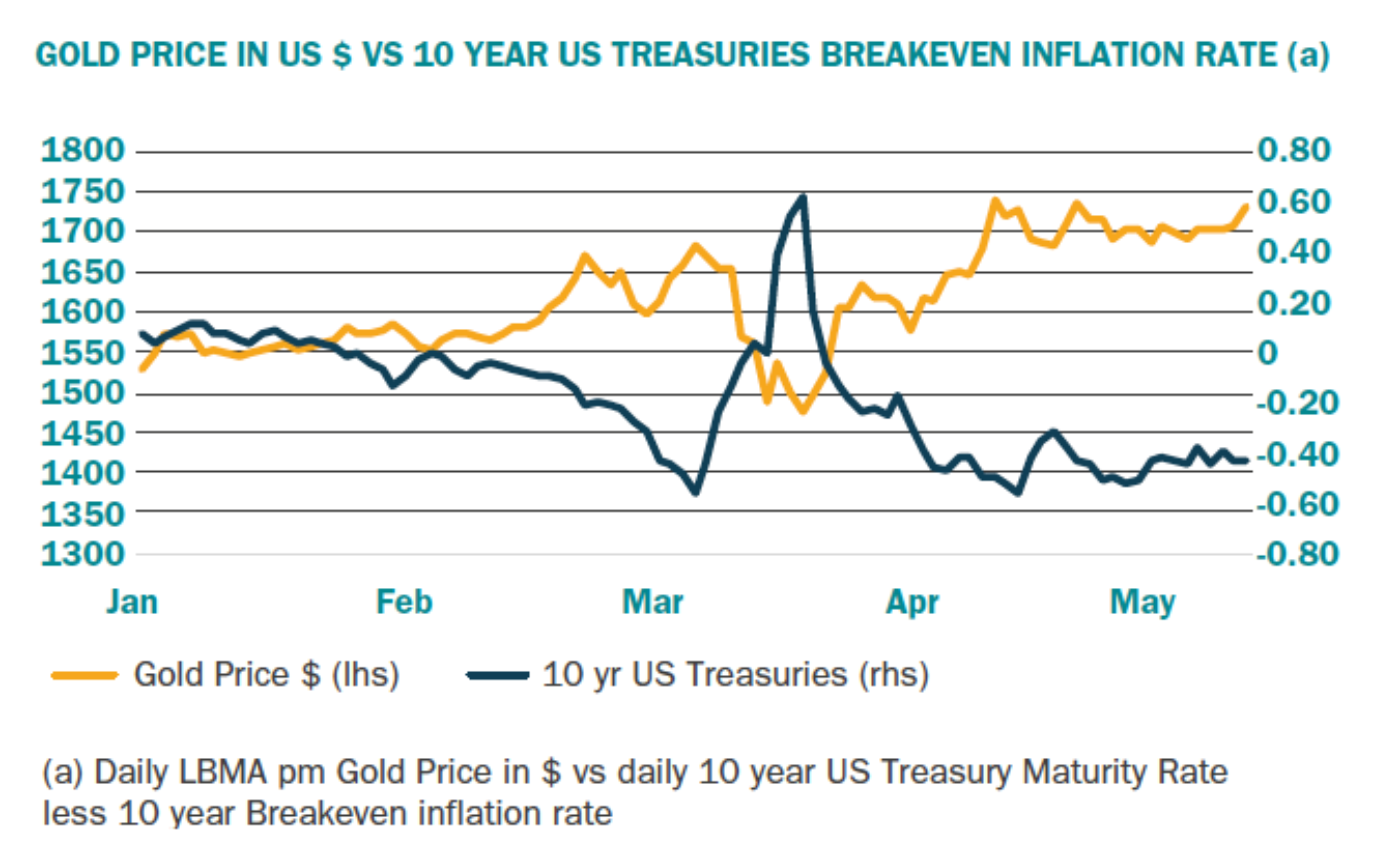