Facing Facts Mining Costs And M&A: The Key Factors To Watch In 2020

Gold has been in the investor’s spotlight for the last couple of years, as spot prices traded at their highest level in over six years, gaining over 18% in 2019 alone, while a renewed and empowered bullish sentiment was fuelled by an escalating trade war between the world’s two largest economies. 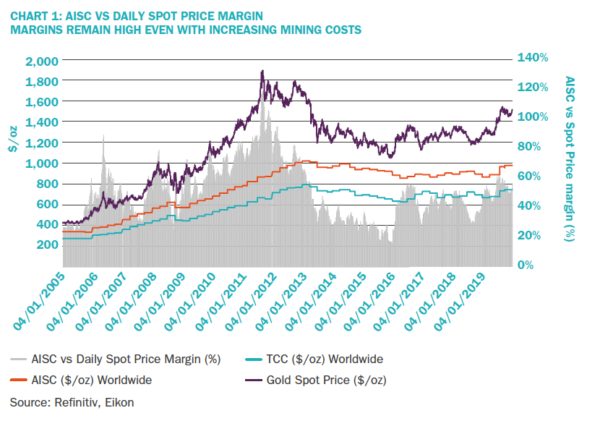 Turning to 2020, the COVID-19 pandemic is changing the financial world in unpredicted ways, while talk about recession, and a possible depression, as well as rising uncertainty levels are having a massive impact on commodities. Most base and precious metals prices are diving, but gold, on the other hand, is trading over $1,650/oz, a 10% gain since the beginning of the year.

In 2019 two of the largest deals the industry has ever seen took place when Barrick merged with Randgold in a $6.5 billion deal and Newmont bought Goldcorp for $10 billion

Mining costs have been a central discussion point for some time now, especially considering how they have been steadily increasing since 2016. Historically, costs have somewhat mirrored gold spot price trends, mainly due to higher demand, and therefore higher costs on service contracts, higher taxes paid and other macro variables, such as oil and energy costs have been incurred. Currency depreciation also plays a major role in costs, particularly in important gold-producing countries such as Canada, Russia and Australia, as well as in most of African and Latin American countries. During 2019, gold-mining companies worldwide posted an average Total Cash Cost (TCC) of $701/oz and an All-In Sustaining Cost (AISC) of $918/oz, an increase of 2% and 4%, respectively, compared to the previous year.

The average net difference between AISC and gold’s spot price increased from $360/ oz in 2018 to $480/oz last year, representing a 52% margin. Reported revenue increased considerably, boosting M&A activity around the globe. In 2019, two of the largest deals the industry has ever seen took place when Barrick merged with Randgold in a $6.5 billion deal and Newmont bought Goldcorp for $10 billion. Soon after these deals were sealed, both companies announced that the divestment of non-core assets was being considered. This strategy is being adopted lately by most of the largest gold-mining companies, as the focus is shifting towards the development of longlasting, low-cost operations, ideally located in an area where synergies can be exploited with other assets from the same company, the best example being Nevada Gold Mines, operated by Barrick.

In 2019 two of the largest deals the industry has ever seen took place when Barrick merged with Randgold in a $6.5 billion deal and Newmont bought Goldcorp for $10 billion

Two examples of this strategy were the sale of the Mponeng mine in South Africa and the sale of Barrick’s share of the Kalgoorlie Super Pit mine in Australia. The world’s deepest gold mine, Mponeng was AngloGold Ashanti’s flagship mine for several years, producing 243,000 gold ounces in 2019, an 8% drop from the previous year, and posting a TCC and AISC of $976/oz and $1,186/ oz, respectively. The deal, valued at $300 million, also includes Mine Waste Solutions, a tailing recovery operation, and will see Harmony Gold, the buyer, strengthen its position as the largest South African gold producer, after also buying the Moab Khosong operation from AngloGold back in 2018. Mponeng has substantial gold reserves below its existing infrastructure, which would require a massive investment to access, involving the building of vertical shafts and the extension of its current eight-year life of mine. 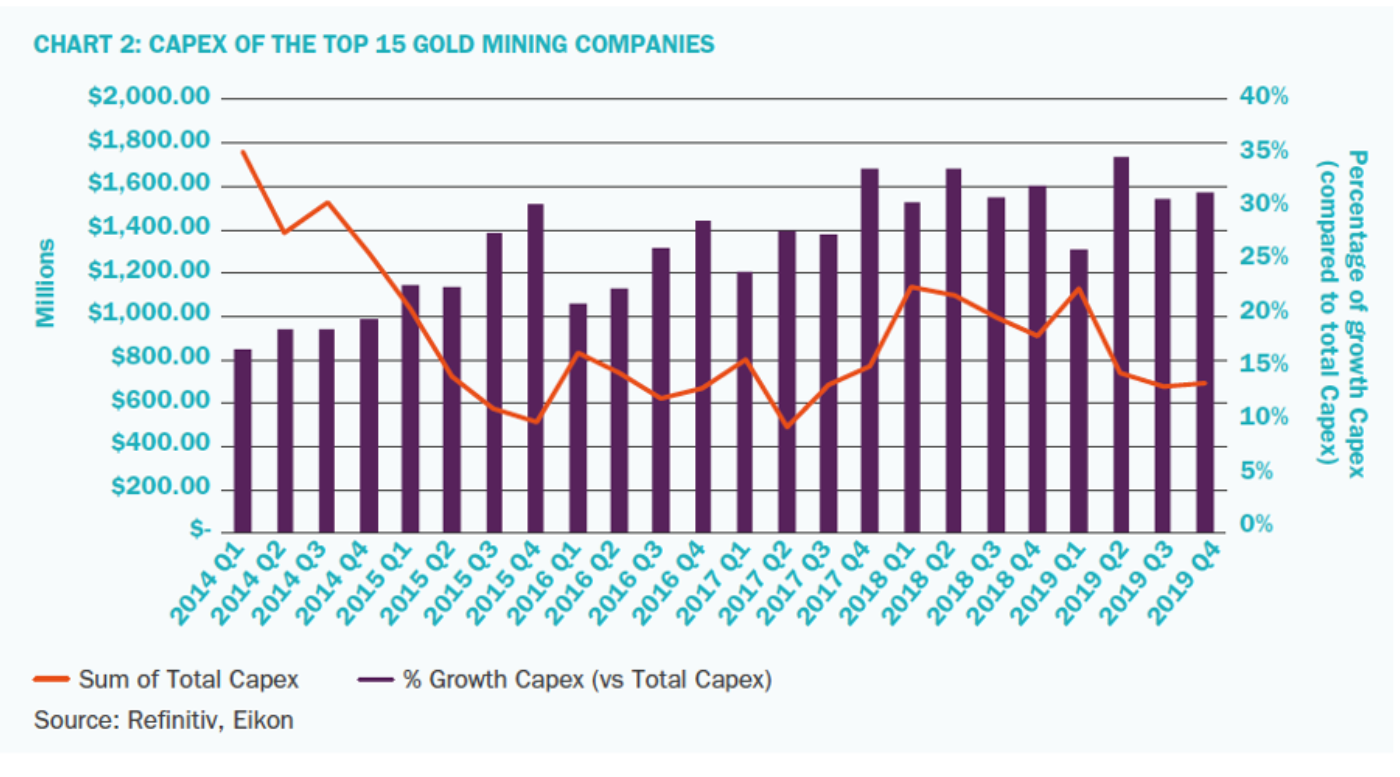 Turning to Australia, Saracen Mineral Holdings bought Barrick’s 50% share in the Kalgoorlie Super Pit mine in a deal valued at $750 million. The mine was affected by a major rockslide in one of the slopes in May 2018, severely impacting production.

According to the company’s news releases, it will take at least three years to completely repair the damage, but Saracen’s officials believe the investment will pay in the long run.

Big companies are turning their attention to high-profit operations and projects, focusing on tier-1 mines. This represents an opportunity for smaller companies that are more willing to fight ounce-by-ounce in operations that either have geotechnical and engineer complexities, limited lifespan or a high-cost structure.

Returning to the previously mentioned deals, the divestments allow AngloGold and Barrick to lower their average costs and focus their investments in more profitable projects and operations, while on the flip-side of the coin, acquisitions see Harmony and Saracen benefit by larger production levels in net revenue-making operations, which also have the possibility for further life of mine extensions.

Turning back to costs, goldmining executives are usually pressured by investors about labour costs, in particular, which are much higher than those for copper, for example. But as of now, miners are limiting themselves to taking a dynamic approach to their capital expenditure structure. If we consider gold’s top 15 companies, average growth capital expenditure has dropped dramatically since 2014, where it represented between 35% to 40% of the total capex, to a 17% average in 2019. Big companies seem to be moving away from big exploration expenditures, which was a core principle for most a few years back.

When we analyse the project pipeline for the next 10 years, we can deduct that, put simply, we are not finding gold as fast as we are consuming it. The impact of COVID-19 in the mining industry is already taking a toll, as more than 95 mines are currently experiencing some kind of disruption in their operations. Some important projects are being paused, particularly copper and silver/ gold projects in Chile, Peru and Mexico, while drilling budgets are being cut and the lockdowns in several countries are directly impacting operations.

Most miners have already withdrawn production guidance for 2020. While we still expect production to marginally grow this year compared to the last year, output growth is starting to decrease. According to our estimates, we anticipate a turning point in 2023, from which we’ll start to see an annual contraction in the global gold output. 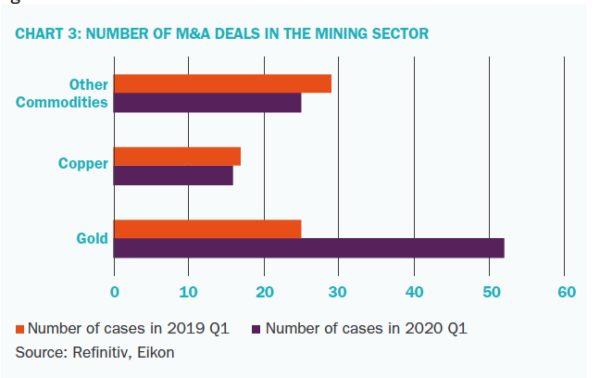 After global mergers and acquisitions (M&A) deals in the gold-mining sector reached historical high levels, over $30 billion in 2019, it is not really a surprise to see capital deals in this space fall in 2020, with or without the impact of the pandemic. Last year, the Newmont- Goldcorp merger and Barrick-Newmont Goldcorp joint venture deal in Nevada shook the market in the first quarter, while in Q1 2020, the size of the gold deals announced (in terms of upstream acquisitions, excluding royalties) fell to approximately $2.4 billion, a 86% yearon- year drop. A silver lining ahead is that the number of M&A cases recorded was actually more than double, indicating that market bullishness towards gold is still immanent.

Indeed, while the number of deals in the non-gold mining space fell in the first quarter, mostly due to the pandemic, gold was actually bucking against the trend. In terms of number of deals, the market share of gold deals has risen from approximately one-third in Q1 2019 to over a half in Q1 2020. As the pandemic takes its toll in global GDP, encouraging massive money printing by central banks, along with the expectation that geopolitical risks will continue rising, it is understandable that industry participants are more bullish in gold than most of the other minerals.

It is interesting to note that an acquisition was made by a pension fund. In February, New Gold Inc. announced that it had entered into a strategic partnership with Ontario Teachers’ Pension Plan and that the latter had agreed to acquire a 46.0% free cash flow interest in the New Afton mine, which could convert to a 46.0% joint venture interest in four years, for upfront cash proceeds of US$300 million. When a pension fund acquires an interest in a gold mine, it speaks volumes for how fund managers view the price outlook of gold – and this pension fund is not alone, as there were a total of four different funds acquiring gold projects in the first quarter.

As a result, over 99 million gold resource ounces have been announced to be changing hands in Q1 2020, at a weighted average of slightly above $23 per ounce of acquisition cost.

In February new Gold Inc. announced that it had entered into a strategic partnership with Ontario teachers’ pension plan

Other than royalties transactions, the first quarter deal list also excludes Egyptian billionaire Naguib Sawiris who is in talks to acquire a 51% stake in a stateowned gold-mining company, as it seems too preliminary at this moment, and the potential acquisition of Cardinal Resources by Nord Gold, as talks are still ongoing. In addition, Premier Gold Mines tried to offer $40.2 per resource gold ounce to acquire a 50% project interest in Greenstone Gold Mines Partnership, but the offer has been rejected by Centerra Gold.

Another interesting observation is that most of the gold deals that took place in Q1 2020 involved low-grade materials – with the exception of Ramelius Resources acquiring the Penny West gold project, which contains 355,500 gold ounces of total resources at an average grade of 13.8 g/t, which resulted in an over $390/oz acquisition cost. We believe corporate CEOs have been eager in acquiring inexpensive, low-grade resource ounces, hoping a higher gold price in the future could provide leverage to both the company’s share price and the economics of the properties acquired. We expect there will be more gold deals to be announced, particularly among the projects that carry higher grades, once the pandemic begins to settle down and business activities resume.