The Treatment Of Gold In Official UK Trade Statistics

By Abi Casey
Head Of Monthly And Quarterly Trade, ONS

It’s worth noting that our figures are published as the balance between the exports and imports and are averaged – a process known as smoothing – over a year to ensure that none of the figures published could be disclosive. Over the last 12 months, this could have been the case, as the ONS has reported large movements in exports and imports of precious metals across different months.

A further point to remind readers of is the fact that neither the erratic path of precious metals nor revisions to trade in this series have an impact on Gross Domestic Product (GDP) – the effect is GDP neutral.

Exports of precious metals have a positive impact on net exports, which boost GDP, while imports have a negative impact.

However, when precious metals are exported, there is a corresponding decrease in ‘valuables’ held within the UK; hence, the overall impact on GDP is zero.

It is worth noting firstly that the UK’s trade statistics are produced in accordance with international guidance, namely the IMF’s Balance of Payments Manual version 6(or BPM6 for short). The ONS follows this guidance as it ensures comparability between countries, which is obviously important when dealing in trade statistics. This guidance includes non-monetary gold as trade and so the UK also includes this as trade.

Using these rules, non-monetary gold and other precious metals have to follow the three rules below to be classed as trade:

• Allocated – Only trade of allocated metals is included. This would include the custodian’s own holdings of metals to cover unallocated accounts.

• Not owned by the central bank – Reserves held by central banks are excluded as we only record ‘non-monetary gold’. The UK’s central bank’s holding, i.e. the Bank of England, is not included in the UK trade figures, but the purchase/sale of metals between a UK resident (other than the Bank) and another country’s central bank is included. The gold is deemed demonetised immediately before purchase/sale.

• Change in economic ownership – The ONS only reports trade on an economic ownership basis and trade is classed as buying/selling between a UK resident and a non-UK resident. The location of the metal is irrelevant, only the residency of the buyer/seller counts, so if the gold stays in a vault, wherever that is, but the ownership changes, then the trade is included. 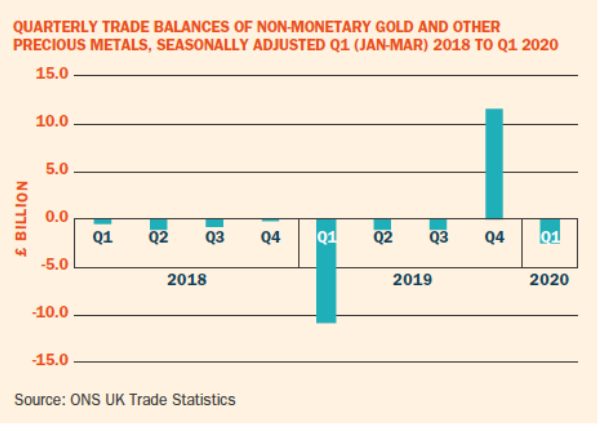 Why Are The Figures Important?

London is one of the global centres of trading in this commodity, meaning it is an important business for the UK. For many countries, the effect of gold on their trade figures is small, but the prominence of this industry in London means it can have a sizeable impact on the UK’s trade figures.

It is important to present our figures both including and excluding gold. The including figures are consistent with our international trading partners, meaning we can easily compare and contrast who is selling what and where. The excluding figures show a more underlying picture of UK trade, which excludes this volatile commodity.

More widely, trade statistics are an important metric for policy makers. It is often said that if a country has a very large trade deficit, it will run out of money, while if it has a large surplus, it may run out of things. While this is obviously over-simplistic, many people across government are keen to monitor our trade flows carefully.

What goods and services is the UK competitive at producing and able to supply to the world, and in what areas are we dependent on others. The UK’s trade flows can have a big influence on many areas of policy, from setting interest rates so that the pound remains competitive to the detail of trade deals.

Where Does The Data Come From?

The Bank of England provides data on non-monetary gold and other precious metals. Data are collected from the five London clearing houses. The ONS and Bank of England acknowledge that this does not cover 100% of gold trade, but it does cover over 90%. As I wrote earlier, this is provided to the ONS as a balance figure (exports less imports) each month.

If there were large value exports and imports within a month, these would cancel out within the ONS data. The ONS then further smooths this data over a number of months to ensure that any sensitive information is not accidentally disclosed.

This reduces the volatility seen month on month and would reduce a high export/import in a month, although data can still be highly volatile, given the large values of gold traded.

While we use these to inform our estimates of country breakdown, we can’t use them for our headline estimates, as we are interested in the ownership of gold changing hands across borders, not physical movement.

As much of the trade in gold does not actually involve the bars physically moving anywhere, we have to use data from the Bank of England on the wider gold trade to calculate our figures.

But we do use the HMRC country estimates of cross-border movement of gold to inform our country level estimates. Currently, we publish our trade in gold and other precious metals, broken down by EU and non-EU. We are looking at whether further breakdowns will be possible in future. However, we would need to have more detailed information on change of ownership for this to be possible, as well as be sure that no published numbers could be disclosive.