The number of global gold deal announcements in the mining industry continued to surge in the second quarter of this year, with more than 200 deals recorded, a jump of over 570% on an annual basis. 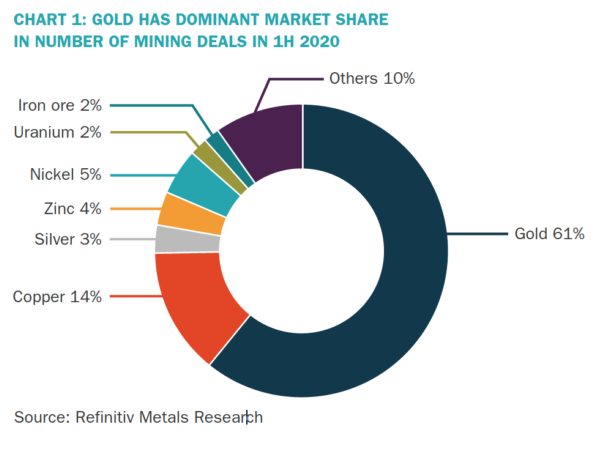 The massive increase in the number of gold deals highlights the bullishness of industry participants towards the outlook for the gold price as they strengthen their project portfolios to increase the attractiveness in the eyes of investors.

While the number of gold deals (including staking ground and the granting of permit applications) was already heating up in the first quarter of this year, the lockdown of Western economies due to COVID-19 put more fuel into the fire, with the number of deals in the second quarter up by approximately 230% from the first.

Despite the massive surge in the number of deals in the gold space this year, the value of deals announced has actually fallen by more than 60% this year. The following are the three largest gold deals that took place in the first half of 2019:

For comparison, the following three are the largest gold deals in the first half this year:

The decline in the value of deals this year is more a reflection of the two major corporation actions taken by Newmont in the first quarter last year, skewing the value of transactions last year to an extraordinary level. As both the Newmont and Goldcorp mergers, as well as the Nevada JV, were exceptional cases, it is perhaps unrealistic to expect that the value of gold deals this year could surpass the level recorded in 2019, given that last year’s total was a historic high. We think the number of deals taken so far is a better reflection of the market bullishness of the gold mining industry.

To better reflect and to compare the sentiment between the first and the second quarters, the following is the market share of gold deals segregated by types based on the number of deals. ‘Others’ means acquiring a project or a company without any resources. Please note that the number of deals in each category all increased in Q2 compared to Q1.

Two segments stick out – acquisitions that involve projects that already have a resource estimate, and companies staking claims or applying for permits. In the second quarter, the market share of acquiring resources fell to 18% (compared to 30% in Q1), while the share of staking claims jumped from 5% to 19%, suggesting that it is getting difficult to acquire a project that already has a resource because of the increasing bullish sentiment and thus companies that may be financially constrained have no choice but to work on grassroots projects.

Indeed, while the total number of resource gold ounces announced to be changing hands in Q2 fell by 52% from the previous quarter to 47 million ounces, the average acquisition cost per resource ounce jumped 182% to $66.7/oz.

As we mentioned in our gold deals commentary on Q1, most of the projects that were acquired that have a marginal resource (i.e. okay grade but small in scale or bulk tonnage scale but low grade). This trend continued in Q2, with the ore at the Ashburton gold project purchased by Kalamazoo Resources being mostly refractory, for example, which explains the cheap acquisition cost per ounce. However, the beauty of this deal is that Kalamazoo does not need to pay a dime for this project as long as it does not produce, as all the payments for this project are tied up with production output. 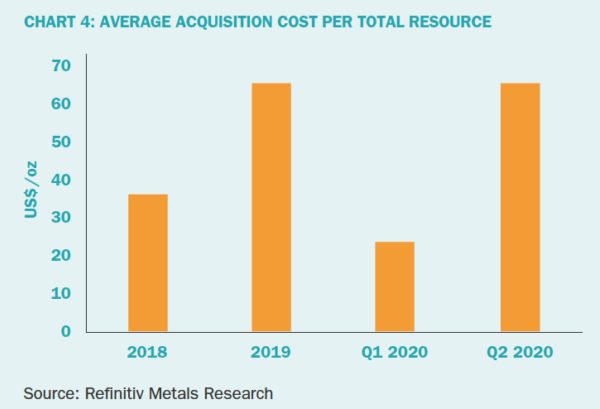 On the other hand, we also began to see some desperate buyers in Q2: Zijin Mining may come to regret paying 200% over Silvercorp’s first bid on Guyana Goldfields as there are technical difficulties on the Aurora mine and at least some (more likely a large portion) of the resources will possibly be written off if mining procedures are to be implemented at a high standard.

The valuation per total resource ounce in the acquisition table below is only a rough guideline to get a sense of how much the buyers were willing to pay for a project, but the cost of the projects to the buyers should also include future capital investments, as well as possible writeoffs in resource estimates in the future (if any), to justify a clear picture of the project and the acquisition. Each project is unique, and it is not easy nor fair to compare and judge projects solely based on acquisition value per ounce.

More importantly, people are willing to pay more for quality projects; therefore, many of these deals will need a good few years to prove themselves and by then we can judge these deals fairly.

Last but not least, as there have been strict travelling restrictions globally as a result of COVID-19, we may well have seen far more completed transactions than have been announced.

The limited logistics and concerns of catching the virus have limited the opportunity to conduct proper due diligence on sites; therefore, if the pandemic situation improves in the second half of the year, we expect the global gold M&A deals trend could maintain its current strong momentum into Q4.

Gold Crashes Through $2,000/Oz. Can The Rally Be Sustained?

Following a 12% jump in the price in July, gold smashed through the $2,000-an-ounce mark on the third day of trading in August. The rally in gold has been powered by the safe-haven appeal of the metal due to the worsening economic conditions resulting from an out-of-control pandemic. The central banks around the world continue to inject stimulus measures to resuscitate ailing economies, which has led in some cases to currency devaluation and lower interest rates, further supporting the rally. Having hit a threeyear high in March, the dollar fell 8% to a two-year low before recovering more recently. Tensions between the US and China have simmered, while US President Donald Trump’s controversial statements on the upcoming elections in the country have kept the investors interested in gold. With all these factors in the backdrop, the outlook for the yellow metal looks promising, but profit-taking could lead to the consolidation of prices after such a rapid rally.

Coronavirus cases have exploded across the world. The global tally of COVID-19 cases has exceeded 20 million, and the conditions are worsening in several US states.

Recent data points to material slowdown in economic expansion, with many countries already experiencing a deep recession. Such weak economic data, both in the US and elsewhere, will likely result in further economic relief packages. Further stimulus measures will be a positive for gold. However, equities continue to be supported by the huge amount of liquidity that has entered the market as a result of the government intervention, but if this support falters, we could see an accelerated run on gold.

On the geopolitical front, relations between the US and China have deteriorated in the last month, with Trump indicating that he is going to ban China-owned application TikTok from the US. The United States had recently shut down the Chinese consulate in Houston, and in a tit-for-tat response, China then ordered a US consulate in the southwestern Chinese city of Chengdu to shut. With the US election on the horizon, this hostile rhetoric is likely to pick up in the coming weeks.

Looking ahead, the focus will continue to be on the coronavirus developments worldwide and on fresh economic data coming out of the United States, which will influence the price of gold in the short to medium term.

Investors will be monitoring just how quickly the world’s largest economy can return to expansion mode and how soon an economic relief bill in the US will be finalised. With such a rapid rise in recent weeks, we may well see a further retracement in the price and a period of consolidation, but the overall picture remains positive for the yellow metal. Institutional investors are turning towards COMEX and ETPs as a means of risk aversion. We retain the view that monetary and fiscal policies around the world will continue to be supportive for gold. Bond yields and short-term interest rates should stay low in nominal terms and negative in real terms for the foreseeable future.

Cameron Alexander holds the position of Manager, Precious Metals Research for the Refinitiv Metals Research team. He has more than 20 years experience in the precious metals markets. Having joined GFMS Limited as a Metals Analyst in 2005, he was brought across to Thomson Reuters in a 2011 acquisition and now heads the precious metals research within Refinitiv’s Metals Research and Forecast division. In his current role he has overall responsibility for the team’s output but remains responsible for the precious metals research across South East Asia, Australasia, Middle East, and Indian Sub-Continent. His main area of research covers macro influences, jewellery, industrial, and investment demand, as well as scrap supply and metal flows from these key regions.

Samson Li has been a Senior Metals Analyst at Refinitiv Metals Research for over six years. He has become a well-known figure in the Chinese mining industry. Prior to joining GFMS, Samson worked for eight years as the Chief Analyst of an asset management firm in Hong Kong, with four years being responsible for managing a portfolio investing in the global mining equities sector. Samson holds a degree in Commerce from the University of Toronto.