At longitude 165⁰ 24’ W, on the coast of Alaska’s Seward Peninsula, the City of Nome is almost as far west as one can be on the North American mainland. 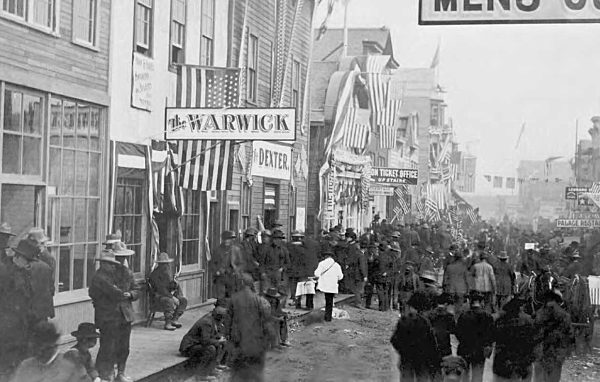 It is a small place, the 2018 population numbered some 3,866, and remarkably isolated. There are neither road nor rail links, and no ferry service. There is no natural harbour, although there is now a seaport, the city is ice-bound for several months a year and the airport is subject to closure by storms.

For the hardy, or perhaps foolhardy, one way into Nome over land is by dog-sled and, every March, the City acts as the finishing post of the Iditarod Trail Sled Dog Race, a competition for some 50 ‘mushers’ and 1,000 dogs over a varying course of about 1,000 miles running from Anchorage, Alaska’s largest city, to Nome. The record time (set in 2017) is just under 8 days and 4 hours!

Scroll back to 1900 and Nome was a very different place. A photograph of River Street from that summer shows a line of tents on a sand spit stretching some 30 miles into the distance, an old paddle steamer converted into a hotel, a riot of half-built wooden houses, the ‘US Restaurant’, the River Side Saloon (drinks 25 cents) and, for entertainment (of a sort), Roscoe’s Theatre Comique.

There were even luminaries in the town, notably Wyatt Earp, who with a partner opened the Dexter Saloon in 1899 in Front Street (see hero image), Nome’s first twostorey building. Earp apparently departed a few years later, with $80,000 (equivalent to about $2.25 million in 2020) stuffed in his pockets.

In short, and thanks to the discovery of rich placer deposits in 1898, Nome had become an archetypal gold rush town and, for a while, the biggest municipality in Alaska, with a population of around 20,000. This crowd was supplemented by the soldiers from Fort Davis down the road, newly built to control the frequent, violent disputes between firstfooters and subsequent claim-jumpers.

A 17 July 1900 line in the Seattle Post- Intelligencer summed it all up, describing the Nome of that year as: “The strangest community ever seen upon the face of this old earth.”

What’s in a Nome?

One theory about how Nome got its name suggests a misunderstanding of the indigenous Iñupiat people’s language. A second suggests the name is of Norwegian origin.

The third, and most attractive explanation, is that ‘Nome’, more accurately C. Nome (for Cape Nome), was a cartographer’s misreading of a chart annotation by a British naval officer of the 1850s, who had actually written ‘? Name’, for future amendment.

By the way, the possibly misinterpreted Iñupiat phrase Kn-no-me means, “I don’t know”, which doesn’t help at all

Unlike the discovery that set off the 1848-51 California gold rush – finding gold where none was thought to exist – gold had been known to exist in Alaska for at least 50 years before the Nome Gold Rush, some of it on the Seward Peninsula where the city stands.

The Russians had found gold before 1850 but had not attempted to exploit it. The first commercial production, 967 troy oz, reported by the US Geological Survey took place in 1880, probably from placers near Juneau in the south.

Arguably, the first unmistakable traces of gold on which Nome was built were seen in the mid-1860s in the Fish River Valley, some 65 miles north, by a young engineer, Daniel Libby, and the euphoniously named Baron Otto Von Bendeleben (commemorated by a local mountain), who were involved in the construction of a planned transcontinental telegraph line.

Libby never forgot his observations and coupling these with other reports of gold found on the Seward Peninsula, plus the mania generated by the Canadian Klondike Gold Rush, which was still going on, returned in 1897. Less than a year later – on St George’s Day 1898 – Libby and his partners made the first major strike in the Peninsula at what quickly became called Council City, the region’s original gold rush town.

Despite the fact that gold continued to be produced here for the next 30 years, the development of these fields was, it turned out, only a prelude to the main event which took place six months later, courtesy of the ‘Three Lucky Swedes’, who met by chance in Council City in 1898 and set out to seek their fortunes further west. 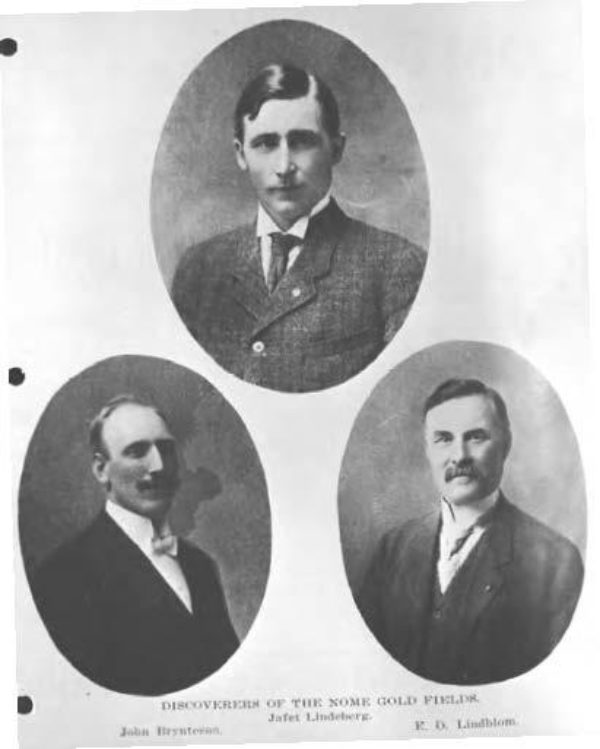 Alaska’s Seward Peninsula is home to hundreds of rivers and smaller watercourses flowing into the Bering Sea. The names of those around Council City, testify to the success, or at least ambitions, of the prospectors – Bonanza River, Eldorado River, New Eldorado River and so on.

However, for Lindblom (a tailor), Brynteson (a coal miner) and Lindeberg (actually a Norwegian, who claimed without justification to be a reindeer herder), a different river was the path to riches and gave rise to the ‘Three Lucky Swedes’ appellation.

To quote Alaska Geographic of 1984 (Cole and Walsh): “After several days of battling stormy weather in their makeshift boat, they came ashore at the mouth of the winding stream which they called the Snake River [on which Nome now stands]. Within a week the three greenhorns, who supposedly could not tell a ‘placer from a potato patch’, had staked most of the best claims in one of the richest gold fields ever found in Alaska.”

News of this discovery spread rapidly, and fuelled by disaffected prospectors from the Klondike and passenger ships from Seattle (only able to anchor in the warmer months), the opening act of the Nome Gold Rush began.

But as new prospectors arrived in the spring of 1899, there were many who immediately took offence at the fact that “the few hundred men in the Nome district had staked about fifteen hundred mining claims, which were enough, if placed end to end, as one observer pointed out, to stretch the entire length of the state of Illinois”. (ibid)

Claim-jumping, and plot-jumping for building space, quickly became, after gold, Nome’s second major business and involved everyone who could afford to play, including a dodgy politician from North Dakota and the inevitable crooked judge who jointly overturned a series of legitimate claims to the benefit of their friends and themselves.

So notorious were their actions, they formed the basis of a 1942 John Wayne and Marlene Dietrich movie, The Spoilers

In September 1900, the rule of law reached Nome and the claims of rightful owners were restored. The Three Lucky Swedes continued to prosper and, according to Wikipedia, their mining company had by 1920 made some $20 million (–or $255 million in today’s money). But this is not the whole story. 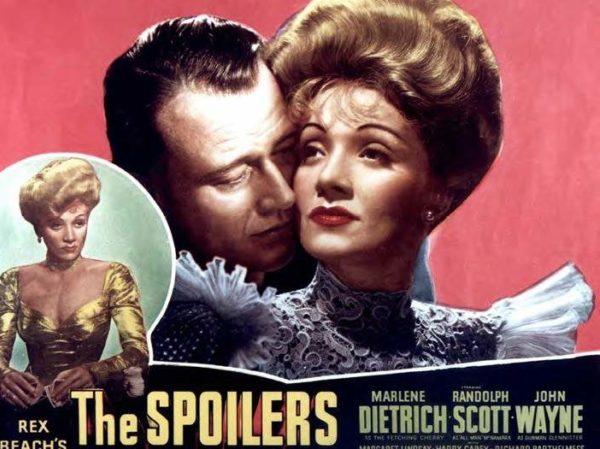 City Of The Golden Beaches

Extracting gold from the unforgiving environment of Alaska is hard, and as well as the costs of filing and defending a claim, requires substantial investment in equipment, let alone accommodation to withstand the harsh winter.

But as with all gold rushes, there were some who arrived in Nome entirely unprepared, without equipment and without money either to buy it, to establish a claim or simply to live. Many of these became destitute, living as best they could in makeshift shelters on the beach.

Then the miracle occurred – the discovery that makes Nome unique in gold rush history.

No claims (just the length of a spade) and nothing much in the way or equipment or experience were required.

Gold was present in good amounts from the surface to four feet down – accessible to all.

“Poor Man’s Diggings – American Soil – 8 Days from Seattle” proclaimed an advertisement for the North American Transportation & Trading Co. The second and final phase of the Nome Gold Rush had begun.

The beach bonanza didn’t last long – two or three seasons at most – and was only profitable for a few.

It became clear that the deposits extending from Snake River and its tributaries into the hills were the best long-term bet even after the Rush fizzled out in 1909.

As a former gold rush town, Nome is unusual. Some, such as San Francisco and Ballarat (Alchemist 89), have prospered. Others such as Council City no longer exist except as marks on the map.

Nome, by contrast, while never regaining the population numbers of its heyday, is still extant and, in terms of employment, beyond the usual coterie of municipal workers, teachers, medical and airport personnel, most of the working population still derives their income, as they always have, from the extraction of gold. Some 115 tonnes so far and still counting.

There is a parallel between the Alaska gold rushes at the end of the 19th century and the more familiar California gold rush of 1848-1851. In both cases, substantial deposits of gold were found in land which only a little time before had belonged to another nation.

California gold was famously discovered on 24 January 1848, nine days before the signature of the Treaty of Guadalupe Hidalgo, which marked the formal end of the Mexican-American War, and enabled the US to buy California and much other territory, for $15 million.

The pace was slower in Alaska, which the US bought from Russia with a cheque for $7.2 million dated 1 August 1868 (the equivalent of approximately $132 million in 2020).

The ‘Alaska Purchase’ was unpopular with many. Describing the newly acquired territory as nothing but a ‘frozen wilderness’, the New York World said that except for furs, there was nothing of value – unless gold were found in the country!

And gold was found. According to figures supplied by the US Geological Survey, to the end of 2018, total Alaskan gold production was between 42.3m and 43.8m troy oz (1.31m to 1.36m kg); however, some estimates are significantly higher.