Gold M&A activities cool down in Q3, but emerge again in Q4

After announcing a flurry of M&A activities in the first half of this year, sentiment in the gold mining sector cooled off in the third quarter. Indeed, we never expected that the fiery activities in the gold space could last for the whole year, and a cooling down period is certainly healthy for the industry in the longer run.

Despite the slowdown, the number of gold deals recorded in Q3 was still by far ahead of the level recorded in recent years. In this article, we break down how the trend of the deals changed in Q3, including a change in the valuation of deals compared to earlier quarters.

The slowdown in merger or acquisition activities in Q3 can be attributed to three major reasons:

Having said that, the global gold mining industry was still announcing deals almost every working day in Q3, indicating that despite the dip in sentiment, people have still been enthusiastic over gold, but more deals in Q3 involved projects that are at earlier stages.

In the first quarter of 2019, two mega deals took place, with Newmont taking over Goldcorp and Barrick forming a joint venture alliance with Newmont at its Nevada assets. As a result, from the perspective of the total number of resources ounces involved (220 million ounces) and deal size ($10 billion), these were at historical levels, and thus using Q1 2019 to compare with other quarterly activities is meaningless.

To be clear, the number of total gold resources refers to gold only (not Aueq) and does not include royalty deals. On the other hand, the deal size also includes the deals involving projects that do not carry a resource estimate, including royalty deals.

In terms of the total gold resources announced changing hands on a quarterly basis, the deals announced in Q1 this year were the highest in the last six quarters, although in value terms, they were far lower than those announced in Q4 2019. Due to COVID-19, the mining industry has become even more bullish on the outlook for the gold price, and thus buyers have been rushing into the market looking to acquire projects. However, many of those willing sellers who decided to sell in a market when the majority had turned bullish may have had good reason to do so. As a result, the average acquisition cost per total resource ounce in Q1 20 was actually lower, due to the quality of the majority of the projects being transacted.

In the first quarter of 2019 two mega deals took place with Newmont taking over Goldcorp and Barrick forming a joint venture alliance with Newmont at its Nevada assets. 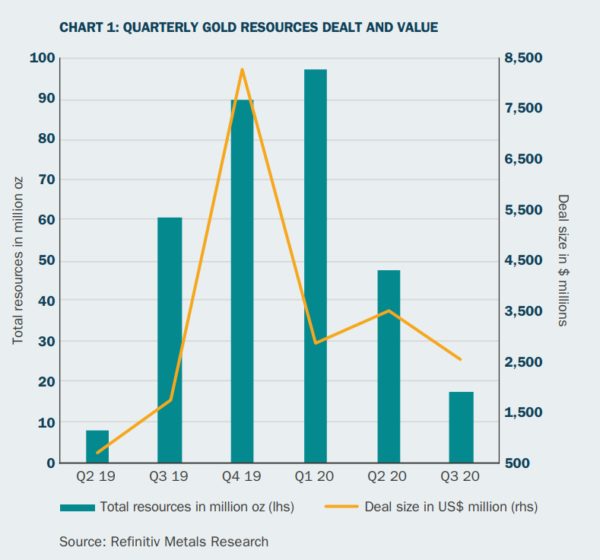 In Q3 2020, 17.5 million gold ounces were announced changing hands in various transactions, down 64% from Q2 and down 72% year-on- year. Total gold ounces changing hands in Q3 was the second-lowest quarterly figure recorded in the last six, while in value terms, it was the third lowest. In fact, none of the deals announced in Q3 involved a project that carries more than 3 million ounces of total gold resources (due to the complicated nature of the Cardinal/Nord Gold/Shan Dong Gold deal, we have excluded this in Q3 for the time being), compared to four each in the first and second quarters respectively this year.

The following are the top three deals in Q3 in terms of resource size:

There were only eight deals announced in Q3 that involved at least one million ounces of resource or more. With the exception of Q2 2019, there were 10 to 11 cases in each of the other quarters that fit this criteria.