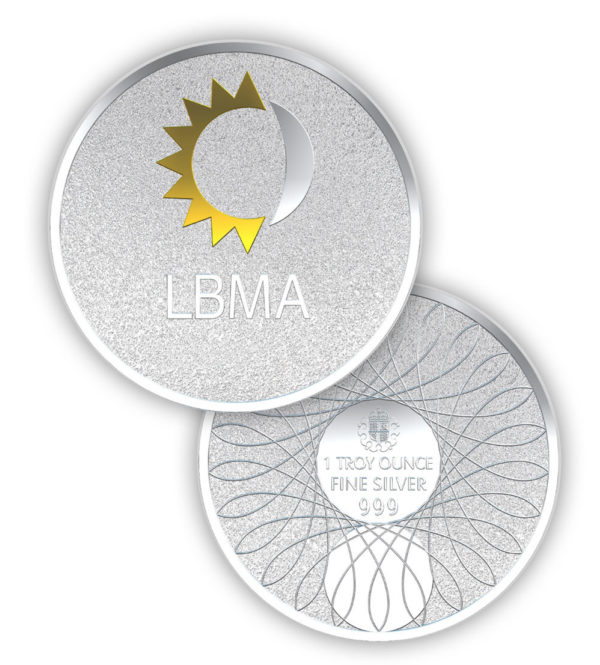 The winning design, from the Royal Mint, in the LBMA’s Medallion competition to commemorate the LBMA’s silver anniversary

The LBMA Gold, Silver, Platinum and Palladium price auctions are recognised as the international global benchmarks for precious metals as defined in documentation for the International Swap Dealers Association (ISDA).

For example, in ISDA’s Commodity Definitions, ““GOLD-LBMA PRICE-AM” means that the price for a Pricing Date will be that day’s morning London Gold Price per troy ounce of gold for delivery in London through a member of the LBMA authorised to effect such a delivery. The price will be stated in US dollars, as calculated and administered by independent service provider(s), pursuant to an agreement with the LBMA, and published by the LBMA on its website that displays prices effective on that Pricing Date.”

Similar conventions apply throughout the ISDA Commodity Definitions for silver, platinum and palladium.

The guiding principle behind the auctions is that all business, whether for large or small amounts, is conducted solely on the basis of a single published price. Clients around the world wishing to buy or sell precious metals may all do so at this price. These fully transparent benchmarks are globally accepted as the basis for pricing a variety of transactions, including industrial contracts and averaging business. They may also be used as a basis for cash-settled forward and option transactions, and are fully IOSCO compliant. Orders executed at the auctions are currently conducted as principal-to-principal transactions between the client and the dealer through whom the order is placed. In April 2017, clearing was introduced for the LBMA Gold Price to allow for greater participation.

It is important to restate that the price of all four precious metal benchmarks are set when transactions between buyers and sellers are matched within a certain defined and published tolerance. This is true both currently and historically.

The first official global precious metal benchmark was adopted for silver in 1897 and for gold in 1919. The London Platinum Quotation was introduced in 1973 (a forerunner of the fixings) and was a twice-daily indication of the market price for spot platinum, reported by some of the principal companies dealing in the metal. The London Palladium Quotation was introduced subsequently. In 1989, the London Platinum and Palladium Quotations were expanded and upgraded to full fixings.

These benchmarks were generically known as the ‘fixings’ for gold, silver, platinum and palladium, but now are known as the LBMA metal prices for each of these four metals.

This change started in May 2014, when the LBMA was tasked with the ultimate responsibility for ensuring that there was no market disruption after the Silver Fixing Company announced that it would wind down its administration of the ‘Silver Fix’ on 14 August 2014. The LBMA worked closely with the market, the Silver Fixing Company Limited, as well as the relevant regulators updating them on the progress of the launch of the new LBMA Silver Price. Following that successful launch, the London Platinum and Palladium Fixing Company also announced its intention to relinquish its role and move the administration over to an independent third party. The LBMA worked closely with the newly appointed independent administrator and successfully launched the LBMA Platinum and Palladium Prices on 1 December 2014. The LBMA went through the same process for gold as it did for silver, with the revised Gold Price auction launched on 20 March 2015. Ultimately, all the former “fixings” for the precious metal spot price benchmarks have been transferred to independent third-party administrators.

The LBMA Gold Price is set twice daily (at 10.30am and 3pm London time) in US dollars per fine troy ounce of 995 gold. The price formation for the gold auction is in US dollars, with the final price is converted into the benchmark in multiple currencies, including Australian dollars, British pounds, Canadian dollars, euros, onshore and offshore yuan, Indian rupees, Japanese yen, Singapore dollars, South African rand and Swiss francs. The benchmark is available both in prices per troy ounce and in prices per gram.

A set of Frequently Asked Questions can also be found on the LBMA’s website.

On 15 August 2014, the historic Silver Fixing, which had been in existence since 1897, was replaced by the LBMA Silver Price.

The price continues to be set each business day at 12:00 (London time) in US dollars per 999 (three nines) fine ounce.

A set of Frequently Asked Questions can also be found on the LBMA’s website.

The LBMA Platinum and Palladium Prices are independently administered.

The prices are set twice daily at 09:45 and 14:00 (London time) in US dollars per 9995 (three nines five) fine ounce. Sterling and euro prices are available, but these are indicative prices for settlement only. Further details can be found on the LBMA’s website.

The intellectual property for all four global precious metal benchmarks is held by Precious Metals Prices Limited, which is a subsidiary company of the LBMA and was incorporated at Companies House on 1 December 2014.

The LBMA auction prices for gold, silver, platinum and palladium are published following setting by the various data vendors such as Bloomberg, Thomson Reuters, etc. They are also available on the LBMA website but with a time delay.