The Artilleryman of Gold 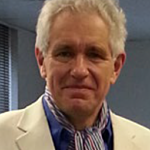 The last time London gold fixed below $1,000 per oz was the morning of Friday, 2 October 2009. Since then, despite near misses in late December 2015 and early 2016, the metal has never again been priced (in dollar terms) in fewer than four figures.

This ultra-conservative valuation is, however, just one of the curiosities embodied by Fort Knox, which as all readers of the Alchemist, and notoriously Auric Goldfinger, know is the home of the United States Bullion Depository. 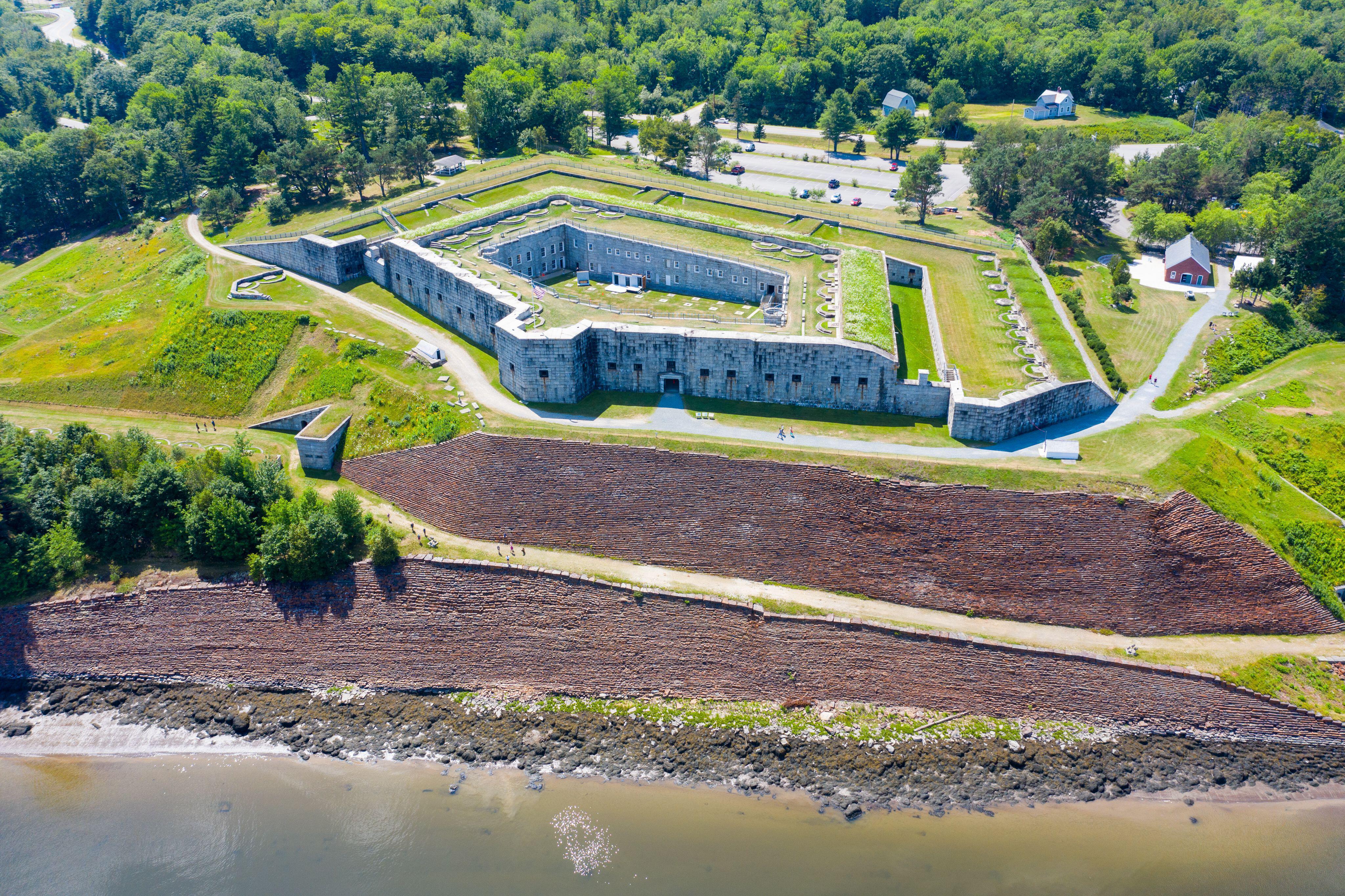 Fort Knox, and the associated Depository, occupy 109,000 acres of northern Kentucky just south of the Ohio River, which forms the border with Indiana. The area was once home to Thomas Lincoln, Abraham Lincoln’s father, and is the burial place of his grandmother, Bathsheba – a Harrison from Virginia.

The original fortifications in the Fort Knox area, specifically at Fort Duffield, now a tourist attraction, date back to the American Civil War. However, construction proper at Fort Knox itself had to wait until the last months of the First World War and, even then, the building programme was cut back as the war ended. The fort was turned into a permanent garrison for the US Cavalry (mechanised) in 1932 and served as the home of the US Armor Centre for 60 years until 2011.

The Bullion Depository was constructed from 1936 and the first deposits of gold (and other precious items) took place a year later. The vault is said by some to be the most heavily guarded place on the planet. Among many other defences, rumour has it that the grounds are surrounded by land mines and electric fences, machine guns go off when a laser is triggered and a radar keeps watch over the entire area. The whole is under the guard of one of the oldest US law enforcement agencies – the US Mint Police, established in 1792, by coincidence the same year that Kentucky became the 15th state of the Union.

Fort Knox, previously known as Camp Knox, was formally designated in 1936, some 130 years after the man for whom it was named was killed by a chicken bone at his home in Thomaston on the east coast of Maine. But who was Henry Knox, and how did a Bostonian bookseller become one of George Washington’s closest confidantes? Why do full-length paintings of Knox usually portray him with either a handkerchief over his left hand or clenching that fist? Furthermore, who were the Green Mountain Boys?

Three-Fingered Henry and His Two Trains

Many historical commentators credit the rise of Henrty Knox’s military celebrity to his association with “two trains” each with different meanings – neither of which was to do with a railroad. The first train for which Henry was known was the name given to his artillery company The Train, which he joined soon after his 18th birthday, prompted it is said by watching a British military parade in July 1768 celebrating King George III’s birthday.

Like many young men of his time, Knox harboured ambitions of military glory and honour, thinking, wrongly as it turned out, that these might accrue from (another) war with the French. In his case, however, these hopes were no mere pipedreams. Henry Knox had in some sense been preparing himself for battle from an early age.

A dramatic decline in family fortunes, coupled with the permanent departure of his father, meant that Knox was obliged to leave formal education at the age of nine and seek employment in support of his mother, Mary, and his younger brother, William. For many people, this would have been a major problem, but for Henry, who found work in a bookstore, it was in many ways the making of the man. 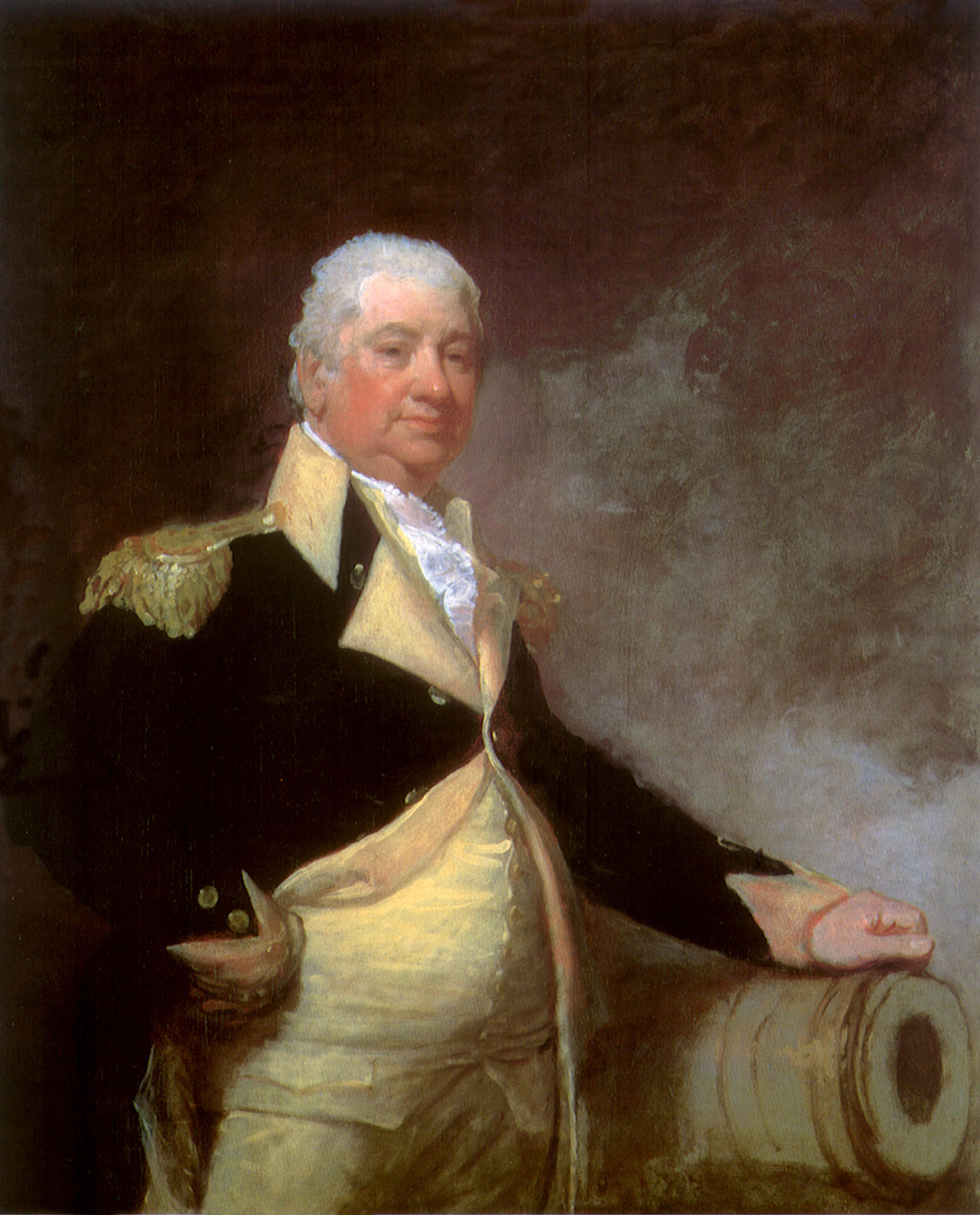 The owners of said bookstore, Messrs. Wharton and Bowes, were keen to allow the boy to read as much as he liked and to take books home for further study. Knox took full advantage of this liberality. He had already studied Greek and Latin in his early (and only) school years, but now indulged himself in European history, mathematics, physics, military strategy and French, all of which were to serve him, and indeed George Washington, exceptionally well in the coming War of Independence.

Henry was big for his age and grew into a big man some 6’2” tall and, in later life, weighing in at 20 stone. And it was his size, implies one of his biographers, Mark Puls, that was helpful in leading Knox eventually to abandon Boston and join the ‘rebels’ (as the English called them). Another incentive was the somewhat arbitrary taxes levied on the American colonists by the Westminster government.

From working in a bookshop, Knox became the proprietor of his own – The London Bookstore, which opened in 1771 – but en route to this venture, he had also developed an extramural reputation as something of a fighter, a man fearless on the streets of Boston, even as they became increasingly filled with nervous if arrogant British troops sent in to quell the unrest primarily caused by the taxes on goods such as tea. Knox had, for example, a lead role as an attempted pacifier and prime witness in the so-called Boston Massacre of 1770, when 11 people died in a clash between the British and the townsfolk, and a couple of years later, he was to some extent involved in the notorious Boston Tea Party (see article "Boston Tea Party" by Aelred Connelly in Alchemist edition 91).

These and similar events gradually shifted Knox’s sympathies from loyalty to the British crown to loyalty to the colonists, and in the same period, specifically in 1772, he became co-founder of the Boston Grenadiers, the smartest (and tallest) of the city’s militia companies. The smartness was perhaps slightly impaired by the fact that when duck hunting with his brother the summer before, Knox had shot two fingers from his left hand – an injury he found embarrassing and was therefore at pains to disguise in the portraits of himself that were to come.

A dramatic decline in family fortunes, coupled with the permanent departure of his father, meant that Knox was obliged to leave formal education at the age of nine and seek employment

From 1772 through 1775, tensions in Boston between the British and the colonists worsened as more British troops were garrisoned in the city, fewer goods got through, British warships used cannons and cannonades to break up mass gatherings, and the Massachusetts colonists set up their own provincial congress to prepare for war. It was clearly time to take sides, and as Knox’s business began to fail with the absence of any British books to sell, he found himself drawn more to the cause of independence and began advising his Grenadiers to start leaving the city and to join the Continental Army – a loosely structured militia under the command of George Washington.

Knox himself was late to leave Boston, held there in part by his marriage to Lucy Flucker, all of whose family were loyalists. However, in the end, he and Lucy went one way, and Lucy’s parents and siblings went another, eventually settling in England.

It has been said that Boston was an early tipping point in the War of Independence. As Knox’s biographer, Puls, says: “It is doubtful that many of the colonies would have supported separation from Great Britain if the army had been unable to free Boston from occupation.” But the problem was the fact that the Americans had very little artillery and certainly nothing to match the guns aboard the flotilla of British warships in the harbour. Furthermore, the Continental Army’s positions were badly vulnerable to attack.

Knox’s knowledge of artillery, admittedly drawn largely from book learning, manoeuvres with his Grenadiers, but moreover actively watching how the British forces set themselves, enabled him quickly to organise better defensive positions for the Americans – work which undoubtedly impressed George Washington. Defence was one thing, but attack was impossible, and the British navy could not be dislodged without guns.

It is here that the Green Mountain Boys enter the story. The ‘Boys’ were a Vermont-based militia, led by Ethan Allen, and the subsequently notorious Benedict Arnold, who in March 1775 captured Fort Ticonderoga, a former French fort that had been taken by the British in 1759 to protect their interests in Canada. Fort Ticonderoga was 300 miles across difficult country from Boston, but it was stuffed with artillery. Following a recommendation by Arnold, Washington sent Knox, then aged 25, to get it.

It is doubtful that many of the colonies would have supported separation from Great Britain if the army had been unable to free Boston from occupation.

The winter of 1775-76 was hard, but by employing what Wikipedia describes as the ‘Noble train of artillery’, Knox got the guns:

“Knox went to Ticonderoga in November 1775 and moved 60 tons of cannon and other armaments over the course of three winter months by boat, horse, ox-drawn sledges, and manpower along poor-quality roads, across two semi-frozen rivers, and through the forests and swamps of the lightly inhabited Berkshires to the Boston area, covering approximately 300 miles (500 km). Historian Victor Brooks has called Knox’s exploit ‘one of the most stupendous feats of logistics’ of the entire American Revolutionary War. The route which he followed is now known as the Henry Knox Trail, and the states of New York and Massachusetts have erected markers along the way.”

The accurate deployment of the Ticonderoga guns (supported by shot and powder donated by other eastern seaboard colonies) dislodged the British from Boston, never to return.

The War of Independence continued until 1783 and, during that time, Knox, who had become the Continental Army’s artillery head and a major general, was rarely far from Washington’s side. As Puls says: “If George Washington was the indispensable man of the Revolution, then Henry Knox was his indispensable man.” The relationship between the two was further cemented by Washington becoming godfather to one of Knox’s 12 children (only three of whom survived into adulthood) and by Knox becoming America’s first Secretary of War under Washington’s presidency. 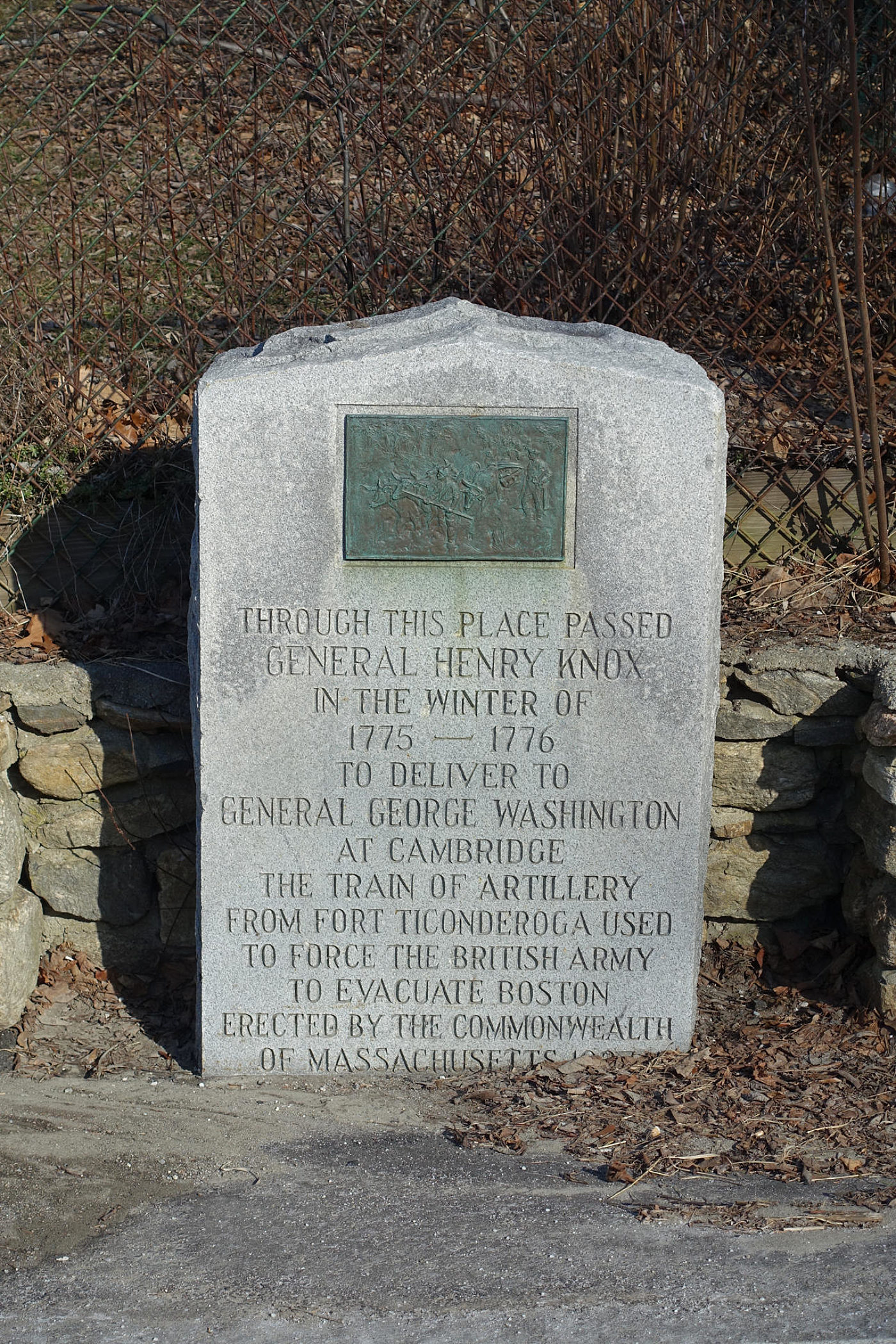 Through the War, Knox had come to recognise, and was frequently frustrated by, what he saw as the absence of professionalism among many American officers by comparison to their ally, the French, and their enemy, the British.

He therefore determined to establish a training school to rival those of the British Royal Military Academy (founded in 1741) and the École Militaire (established in 1750).

Knox’s first attempt at an American equivalent was established at Pluckemin, New Jersey, the Continental Army’s artillery winter cantonment in 1778-79, but his major opportunity, and one of his lasting legacies, came in August 1782, when he was made commander of the crucial defensive position of West Point on the Hudson River – not that there was an immediate move to turn West Point into the school it is today.

It was not until 1802 that President Jefferson called for and signed legislation establishing a “Corps of Engineers” which “shall be stationed at West Point and constitute a Military Academy".

West Point is, of course, less familiar in gold circles than Fort Knox, but the irony here is that while the latter is named for Henry Knox, the former was actually developed by him and is, as well as a centre of military excellence, a mint and depository for some 22% of today’s US gold reserves.

A final irony, one perhaps for our times, is that artillery and engineering genius though he was, Knox was less successful as a businessman – a problem compounded by late payments for his military service and a meagre salary arising from his role as Secretary of War.

At his death, on 25 October 1806, at his home in Thomaston, Maine, the man whose name is synonymous with the riches of Croesus was running a bankrupt estate.