Alchemist 100: Back to the Future with our CEOs

In this article, we feature the recollections of two CEOs who were at the helm for the vast majority of the lifetime of the Alchemist – Stewart Murray and the current CEO, Ruth Crowell. Here, they recall their favourite memories of the Alchemist and the memorable articles and events that featured during their respective tenures.

Every single edition of the Alchemist published during my 13 years as LBMA Chief Executive brings back memories. Very little of what happened at LBMA did not finally get into the Alchemist in one form or another.

I HAVE A COMPLETE SERIES OF ALCHEMISTS NEXT TO MY DESK, BEGINNING WITH THE FIRST EDITION IN 1995, THEY FORM A WONDERFUL HISTORY NOT ONLY OF THE ASSOCIATION BUT ALSO ITS MEMBERS, THEIR REPRESENTATIVES AND THE WHOLE PRECIOUS METALS BUSINESS IN ALL ITS MYRIAD FORMS

The reason that I have a complete series of Alchemists next to my desk, beginning with the first edition in 1995, is that they form a wonderful history, not only of the Association but also its members, their representatives and, indeed, the whole precious metals business in all its myriad forms. Brilliant covers, perceptive contributed articles, Market Moves, the Events Calendar and even the adverts, which started to appear in November 1998, all combine to paint a vivid picture of the London bullion market and the industry that it serves. When, in September 1999, I arrived at the elegant offices in ‘Fred’s Place’ (or to give its full address, 6 Frederick’s Place) which we shared with the London Investment Banking Association, it was made clear to me that my first and most important task was to ensure the success of our first Conference – to be held just five months later in Dubai.

Dubai was a place I knew well from my GFMS days and I was delighted with the choice of venue that had already been made by Martin Stokes and the Management Committee. But the tiny LBMA Executive had no experience of organising events on this scale and time was very short. After a quick reconnaissance trip to Dubai, I made one of the best decisions during my time with LBMA, namely to appoint Maggie Nash as our Conference organiser. Maggie, who had just retired from the events team at J.P. Morgan, took over all aspects of the Conference apart from the actual speakers’ programme. Perhaps not surprisingly, many of the speakers’ names had been found in my GFMS address book. 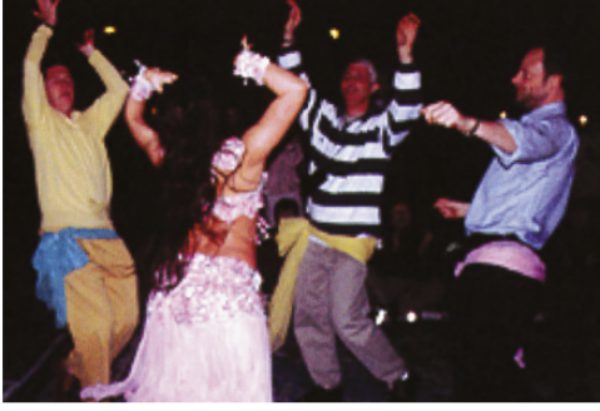 Dubai was a success, perhaps most memorably on the final evening, when before catching midnight flights to get back to their offices, many members of the London market had the pleasure of witnessing a display of belly dancing by three LBMA Chairmen (two former, one present, see photograph above) at the Desert Barbecue (see Alchemist 20, July 2000, ‘Looking forward – Three days in the city where all that glisters is gold’). Our team learnt a lot from Maggie Nash during the next four years and we were particularly indebted to her in 2003 for finding a great venue in Lisbon at very short notice when we had to cancel (or in fact postpone) our event in Shanghai because of SARS. My second major task (announced in Alchemist 18, February 2000, ‘LBMA News’) was to implement the decision to allow companies outside the UK to join LBMA as International Associates.

Here again, my GFMS address book proved to be very useful. The admission of the first four Associates – three refiners and a bank (from Dubai, Japan, Poland and South Africa) – was announced in the Alchemist (see Alchemist 20, July 2000, ‘Welcome – First International Associates Join the Field’). Making fundamental changes to the Good Delivery List was not part of the plan when I arrived at LBMA, but this is just what happened thanks to two unconnected developments. The first was the decision by Engelhard-Clal to cease acting as one of LBMA’s two independent referees. The second took the form of a letter received in 2001 from the Austrian Mint complaining about the fineness of some 999.9 gold bars. I well remember the discussion about this in the Physical Committee and the suggestion made by Neal Johnson that we should introduce some form of checking the technical competence of Good Delivery refiners.

This marked the start of a process that led more than two years later to the announcement of Proactive Monitoring for all refiners on the Good Delivery List (see Alchemist 26, April 2002, ‘LBMA Good Delivery Lists – A Proactive Approach’). To understand the revolutionary nature of this change, we have to remember that, in 2001, the role of the LBMA Executive in the assessment of Good Delivery applicants was merely to apply the rubber-stamp of accreditation after all the work had been done by the referees and the ‘vaults’, the latter being the market-making banks represented on the Physical Committee.

ALL THESE DEVELOPMENTS FEATURED PROMINENTLY IN THE ALCHEMIST, WHICH WAS THE IDEAL WAY OF INFORMING THE MARKET ABOUT THEM.

But by December 2003, when I announced how the new Proactive Monitoring system would work (see Alchemist 33, December 2003, ‘Refereeing the Good Delivery System’), the Executive was fully in charge of all aspects of the system. The various Good Delivery initiatives in the following years all stemmed from this change. These included the first Assaying and Refining Seminar (later Conference) in 2005, the Visual Guide to Good Delivery Bar Quality in 2008, the Reference Materials in 2009, Proficiency Testing in 2012 and (though I cannot claim credit for it) the Responsible Sourcing Guidance in 2013. All these developments featured prominently in the Alchemist, which was the ideal way of informing the market about them.

As a bit of a dinosaur, I am saddened that my collection of printed Alchemists will not contain editions 97 to 99, as the LBMA moves to more digital publications, so I am delighted that LBMA has decided that Alchemist 100 will be sent to the printers as well as available electronically on the website.

In 2021, I will celebrate 15 years since having the right audio typing skills to take me through LBMA’s doors at 13/14 Basinghall Street. Over that time, I have had almost every job in the office, from receptionist to CEO, including Alchemist editor from 2008 until 2012.

My direct involvement in the Alchemist arrived with the departure of the second editor, Susanne Capano, following the golden anniversary edition, Alchemist 50, April 2008 (see front cover across). I was responsible for content creation for Alchemist editions 51 to 66. Proving myself capable of producing quality Alchemists was an important factor in my promotion to Commercial Director in 2009. Some of my favourite editions were our annual country focuses.

Russia in Alchemist 54, April 2009 was a particularly special one, having managed to get two major Russian producers to provide substantial pieces. The articles focused on both the production and the investment side of the Russian bullion market. I’m grateful for the support of Alice Toulmin who took the publication to new levels. Aelred Connelly came on the scene in 2012. It was in edition 67 that he was officially recognised as Alchemist editor, with his name appearing in lights in the black box at the back of the magazine. As Commercial Director, and later Deputy CEO, I stayed involved with the curation of the content as part of the evolution of LBMA’s communication strategy.

When I took over as CEO in 2014, I wrote my first Editorial, in Alchemist 73, March 2014, which focused on the challenges stemming from recent rafts of regulation: Dodd-Frank, Basel III and, most importantly, the IOSCO Benchmark Principles. At that point, there were still many in the market who were in denial that regulation was here to stay. Many market participants saw Responsible Sourcing as a nice to have, not a business requirement. Little did I know when writing that editorial how Deutsche Bank’s January announcement that it was selling its seats in the Gold and Silver Fixings would cause such seismic changes in the Loco London market. These seismic changes also meant my attentions were needed elsewhere, leaving the Alchemist firmly in Aelred’s capable editorial hands.

On 29 April, Deutsche Bank announced that it intended to withdraw from the daily Silver Auction, providing just three months’ notice. On 15 May, I volunteered LBMA to take the lead in supporting the market by identifying, building and implementing a new silver benchmark, all by the strict deadline of 15 August. This rapid turnaround was needed as having just two participants in the Silver Auction was unsustainable. I remain grateful for and inspired by the wonderful people from the industry who came together to avoid serious market disruption – in particular, the late Jon Spall, who supported the transition of all four price benchmarks to independent administration. Jon documented these tumultuous times and called for further market evolution in his piece ‘No More Fixings’, Alchemist 75, October 2014.

Despite these turbulent years, we celebrated 100 years of the London Gold Price in 2019 (see photograph above of the reception at N.M Rothschilds offices held on 12 September 2019), with some wonderful features in the Alchemist of course, and now we are celebrating another 100 in the form of the centenary edition of the Alchemist. As we head into a second year of pandemic, I am grateful to have recently shared those Gold Price celebrations with so many of our Alchemist readers. I look forward to when we can meet again as an industry and the celebrations that will surely follow.