The Prevailing Position of the South African Economy, With Particular Reference to Gold

The South African economy is broad based, with manufacturing now dominating GDP (24 % of GDP), but with mining dominating exports (47 % in 1995). The construction, agriculture, power, water and financial service sectors also added considerably to GDP. South Africa has a modern industrial and financial infrastructure, and its telecommunications and communications infrastructures are of first-world standard.

In 1995, the South African economy grew by 3. 3 % (GDP) to R430.4 billion (US $119 billion), and inflation was at its lowest level in 25 years at 8.9%. Despite a number of promising economic indicators since the 1994 general election, the political euphoria has yet to be translated into real progress in the economy. A number of structural constraints to higher economic growth rates exist.

The levels of domestic savings and domestic investment, at 16.3 and 16.6 % respectively, are for too low to sustain high growth rates, despite a substantial improvement in investment by the private business sector. Foreign capital inflows in 1994 and 1995 have assisted in supplementing the low domestic savings pool (thus, SA has run current account deficits in those years), but much of this capital is speculative in nature. The domestic business and investment environment has faced a number of uncertainties with respect to the plethora of legislation under review and, more specifically, uncertainties about the Government's economic policy direction in a number of key areas. Such uncertainties include a lack of clear, coherent government policies on abolishing exchange controls, privatising state assets, taxation policy and the functioning of the inflexible labour market. 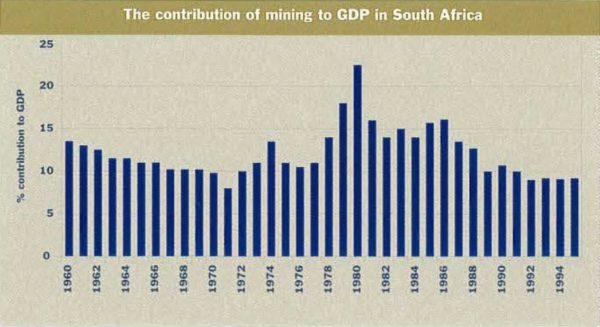 Gold mining has played a significant role in the economic development of South Africa over the past 120 years. Such cities as Johannesburg, Welkom, Orkney, Springs, Benoni and Klerksdorp grew out of gold mining, and much of the country's infrastructural development of roads, electricity generation, water reticulation, telecommunications, housing and the development of industry have resulted from gold mining.

Gold mining contributed 4.8 % in broad macro-economic terms to GDP in 1995.This is substantially down from the 17 % recorded in 1980 when the gold price peaked. Taking into consideration the indirect contribution to the economy via various multiplier effects, gold mining's total contribution to GDP is closer to 10 %. Examples of the multiplier effect include industries which provide goods and services to gold mining, the balance-of-payments impact and the employment multiplier among others. Gold mining also contributes substantially to the fiscus. In fiscal 1994/ 1995, the estimated total direct taxation paid by gold mining was R1. 5 billion with gold mines also paying levies, tariffs, surcharges and other financial imposts at various levels of government. 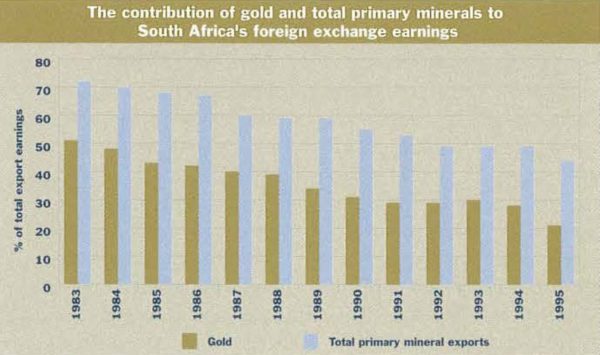 Gold mines employed some 340,000 workers in 1995, representing approximately 2. 3 % of the total economically active population, or 3 .5 % of all those formally employed in the economy. Approximately R8 billion was paid in wages. Employment levels have been at a steady rate of decline since 1987 when approximately 520,000 people were employed in the gold mining sector.

Countries, such as Lesotho, Botswana, Swaziland and Mozambique, between them supply some 40 % of the migrant labour employed in South African gold mines. Through the repatriation of part of employee earnings, these countries derive substantial benefits in foreign exchange earnings, and the employment of their nationals. 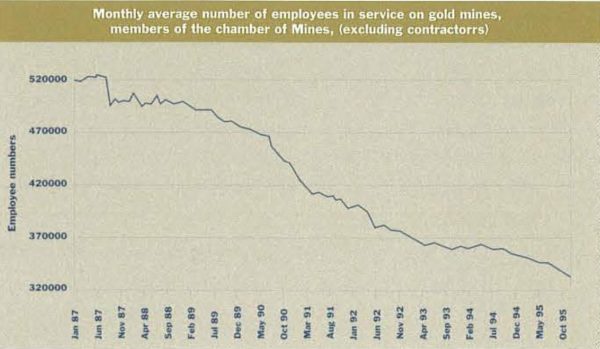 The development of the technical capacity to mine deep-level gold ore bodies has seen South Africa become a world leader in deep­level mining technology. This has led to a dichotomy whereby gold mining is both labour and capital intensive. This is because of the substantial capital required for ventilation, cooling, hoisting underground tunnelling and surface processing plants, and the need to have the mines operated by large numbers of workers, particularly in hard rock mining conditions. In the case of gold mining, the depth of operations has increased to levels of about four kilometres below the surface in some cases.

The most fundamental challenge facing the South African mining industry is the productivity of labour and capital and their impact on the cost of mining and extracting minerals. For most minerals, South African producers are 'price takers' as the prices are set on international markets. In order to remain competitive., particularly with many low-cost emergent world producers, South Africa's mining industry has to focus on productivity and cost trends.

Operating margins have to remain, or become, competitive to attract investment into the industry, and to sustain existing operation. For the industry to remain competitive, it must be provided with an operating and investment environment that does not disadvantage it vis-a-vis other mining countries. Current inhibiting factors include restrictive government legislation (ring fencing, exchange controls), government intervention in the domestic economy (which has raised input costs to the industry, such as transport, taxes on fuels, etc.), high levels of domestic inflation and taxation (particularly on input costs).

To improve the productivity of labour and capital, a number of strategies have been developed, such as full calendar-year operations, two -tier bargaining and investment in human capital. An enabling economic and investment environment is also required to reduce investment hurdles rates and to stimulate further investment into the sector. Generally, what is required is an economy based on a lean and efficient government and a thriving, prospering private sector based on enterprise.