The Russian Bullion Market: Bursting Through the Asphalt

In Russia, the circulation of precious metals has been historically regulated on the basis of selective authorisation, in which a transaction is deemed to be prohibited unless expressly allowed. With the introduction of liberalisation, bullion trading has evolved and Russia has become an integral part of the global bullion market. However, numerous restrictions still hamper the development of market infrastructure. 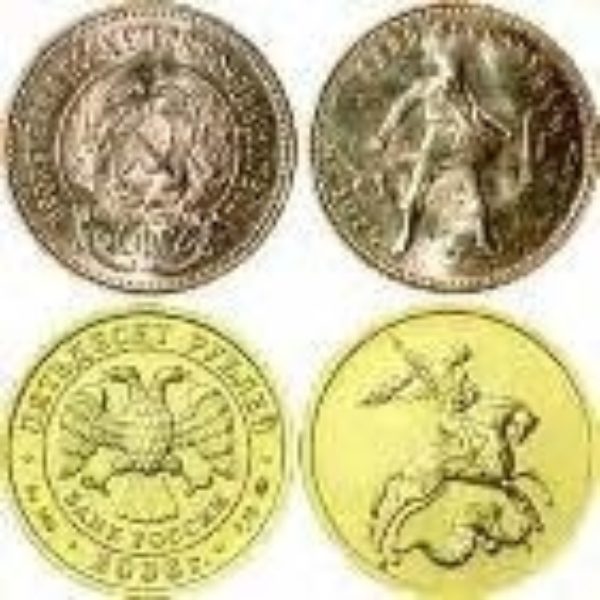 By decree No. 756 dated 30 June 1994, the Federal Government outlined basic principles of circulation of gold and silver in the form of bars, raw materials, scrap, half- finished and finished products (with a minor exception of jewellery items). Along with foreign currency, precious metals formed at that time the special group of assets (legislatively defined as “the currency values”) and their circulation was regulated very strictly according to the basic principle of “transaction prohibited, unless expressly allowed”. Later on, a number of liberalisations were introduced: Federal Law No. 41-FZ, “On precious metals and precious stones”, was adopted on 26 March 1998. The currency exchange control was substantially eased and precious metals were removed from the “currency values” category. The state monopoly of the export of fine gold and silver was abandoned in 1997 and the same has been done recently with regard to the platinum group metals.

Nonetheless, regulation of the Russian bullion market remains rather strict and convoluted:

It should be noted that the slightest failure to comply with the rules can result in very serious punishment – administrative penalties, confiscation of precious metals and funds received, and even imprisonment. If the amount of an illegal transaction exceeds 250 thousand roubles (which is the equivalent of less than 10 troy ounces of gold at the current price), the violation is qualified as “material”, resulting in the imprisonment of the guilty parties for up to seven years. 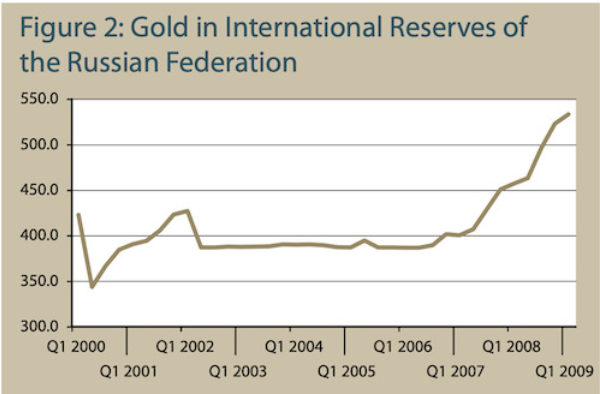 As in London, bullion transactions in Russia are usually made on an over-the-counter basis. Six or seven prime-rated commercial banks deal regularly as professional traders and form the core of the market. Their client base is made up of smaller banks, producers, industrial consumers and investors. Service functions are performed by refiners and carriers of valuable cargo. The market participants are not associated into any kind of self-regulated organisation, neither has a standard form of documentation been adopted, and no obligatory market-making is practised. The most common and outstanding problems (related to regulation, tax issues, etc.) are usually discussed on a case-by-case basis between members of a special committee of the Association of Russian Banks.

The Russian State standard specifications for gold and silver bars are similar to the London Good Delivery specifications and require an even higher fineness of metal – at least 999.5 for gold (with 999.9 forming the major part of gold actually produced) and999.8 for silver. Smaller bars of weight from one to 1,000 grams are also available; however, the cost of their production charged by domestic refiners is much higher than the tariffs of major foreign refiners, so they are traded usually at a considerable premium. Eight Russian refiners are listed by the LBMA as acceptable Good Delivery refiners for gold, and seven for silver.

Physical metal is traded mostly between producers, banks and industrial consumers. Investors use unallocated bullion accounts with banks and also purchase bars and coins for hoarding purposes. Banks usually pick up bars sold by producers directly from the refiner’s warehouse. Interbank physical transactions are commonly settled through banks’ own vaults or, alternatively, through the vault of a carrier.

There is no established clearing system for paper gold transactions: core banks may clear deals between the unallocated bullion accounts of their own clients but usually do not use loco Moscow accounts for clearing with other banks. This undeveloped settlement structure can be explained by the tax risks (some VAT issues are outstanding) and, probably, by a lack of serious demand for its further development. A bank’s bullion liquidity is rather easily managed by means of physical transactions; its open positions arising from trades with domestic counterparties are usually balanced by loco London deals with major international bullion banks, and clients usually prefer to deal with the bank keeping their bullion accounts and do not require transfers to other banks.

Non-deliverable (cash-settled) gold and silver futures and options are traded on the RTS Exchange, but the volumes of trade are rather small. For example, in the first quarter of 2009, the most actively traded June gold contract averaged 311 trades per day, with a mean daily volume of 206 million roubles and 6,404 contracts (the size of a contract is one troy ounce). For the same period, average daily open interest was 18,730 contracts or 709 million roubles.(1) 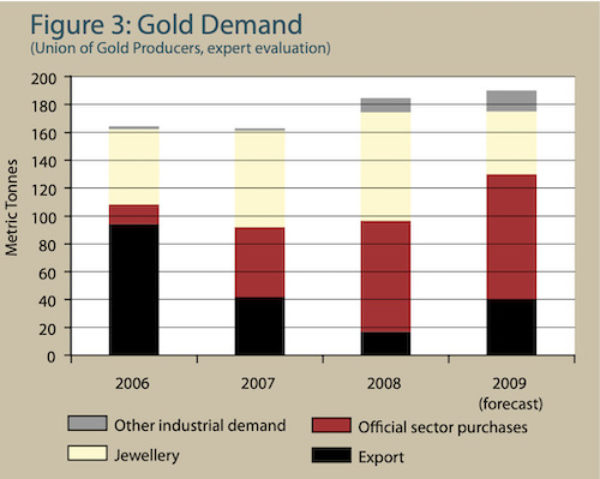 In his trading practice, the author has many times been approached by foreigners hoping to purchase gold or silver in Russia at a considerable discount. There seems to be an erroneous belief among the market community that, as the country is one of the world’s top producers, metals here should be cheaper than elsewhere. It is perhaps timely to disabuse the Russian market’s trading partners of this notion: the Russian Federation became part of the global bullion market more than 10 years ago; therefore, differences in price (or, in other words, location swaps) between Moscow and London, Zurich or other centres are limited by transportation expenses, cost of funding and other similar factors, which usually do not result in substantial differentials.

As a rule, in Russia, the price of a metal is determined on the basis of the London spot market or fixing price. In wholesale trading, quotations are made in terms of a premium or discount to London (expressed as a percentage or, alternatively, in cents per troy ounce). For example, a lot of 10-20 thousand ounces of gold in standard Good Delivery bars sold ex- works refinery located somewhere in Siberia would probably be quoted at a discount of about 20 US cents per ounce; in Moscow, the same lot may be quoted flat or even at some premium. Payments between residents can be made in roubles only, so the final price is calculated through the prevailing market exchange rate. The weighted average rate of the Moscow Interbank Currency Exchange for trades valued “today” or “tomorrow” is usually taken as a benchmark.

It may be interesting to look at the evolution of location swap differentials for gold and to consider the major driving forces that determine them: 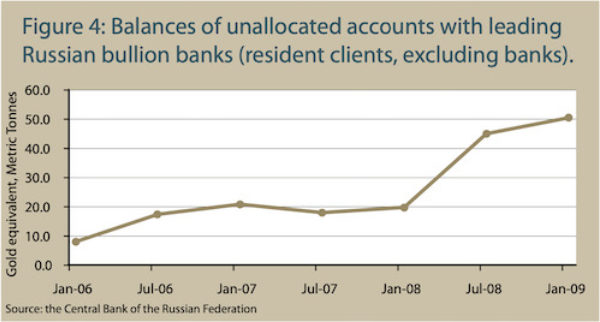 Thin (and sometimes negative) margins between the prices of the international and Russian bullion markets resulted from a significant increase in domestic demand during the last few years (Figures 2 & 3). This was based on rising industrial consumption, purchases by the Central Bank and also individual investment activity (buying bars and coins for hoarding).

According to the expert evaluation of the Union of Gold Producers, compared to 2006, domestic industrial consumption of gold rose more than 50% and reached 56 tonnes of fine metal in 2008. For the same period, official gold reserves rose 35% (up to 522 tonnes as of the end of 2008).

Some idea of individual investment activity may be taken from reports of Sberbank of Russia (the Savings Bank of the Russian Federation, wholly owned by the state, which has the largest retail network covering all the country’s territory). At the beginning of 2008, the bank announced it had more than 130,000 unallocated bullion accounts – their total balance being equivalent to more than 20 tonnes of gold. As of 1 December 2008, the bank held 280,000 accounts with a total balance of 51.8 tonnes in gold equivalent; by the end of first quarter of 2009, these figures had risen to 334,000 accounts and 54 tonnes in gold equivalent. The bank’s total sales of gold bars to individuals for 10 months of 2008 reached six tonnes, which was three times greater than for the whole year 2007. The major share of investment demand is held by gold (70% of total sales), while other metals are less popular: silver takes 17%, platinum 9% and palladium 4% (figure 4).

Bullion coins are very popular too – a replica of the old-time Soviet Chervonets (the “Sower”, figure 1 on page 3) was returned to circulation by the Central Bank in 2001 at a 10-rouble face value. The entire issue of 6,565,000 coins (produced between 1975 and 1982) completely sold out a couple of years ago. With 7.742g of fine gold in every coin, that makes 50.8 tonnes of gold bought mainly by individuals. The current investment coin, the 50-rouble golden St. George, is also in real demand at the moment. With such an increase in domestic demand, gold export naturally declined sharply: from 94 tonnes in 2006 to approximately 17-20 tonnes in 2008.

For 2009, however, the outlook is still in question. The recent spike in demand has been based mostly on the effects of general economic growth (in the first half of 2008) and the massive run on savings with the devaluation of the rouble (in the second half of 2008 and beginning of 2009). The sharp fall in disposable income and the substantial(2) increase in the rouble-denominated gold price undermined both industrial and investment demand. In view of this, a decrease in domestic consumption of gold and some increase in exports of gold should be expected for 2009. The Russian Assay House just published their Q1 report on jewellery consumption: gold fell to 10.3 tonnes (down 44.6% on Q1 2008) and silver rose to 56 tonnes (+54.7%). The situation will also depend very much on the official sector, which it is hoped will remain an active buyer. Following the Central Bank, the Government declared its intention to increase purchases of gold through Gokhran of Russia and even to provide producers with partial advance payments in order to replace collapsed financing from commercial banks.

Nevertheless, there is no doubt that due to its integrity with the international bullion market, the market of Russia will provide the required liquidity and service to all its participants and, particularly, to gold producers, hopefully allowing them to benefit from increased global demand for their product. 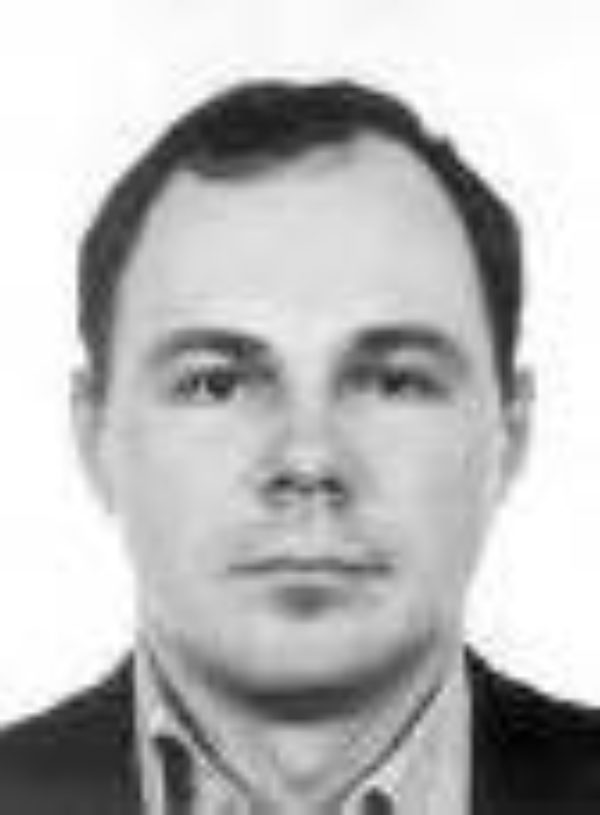 Andrey Pikanovskiy is the Head of Treasury and Sales with Polyus Gold, Russia’s largest gold mining company. Before joining Polyus in 2004, Mr Pikanovskiy worked with the Precious Metals Division at Unexim Bank and the Treasury Department at Rosbank. In addition to bullion banking activities, he has regularly been involved in professional discussions on various problems of market regulations and taxation.

Mr Pikanovskiy graduated from the Moscow Institute of Physics and Technology (1995, Applied Mathematics and Physics, Master degree) and Finance Academy under the Government of the Russian Federation (2002, Finance and Credit).