Outlook for the Australian Producer Market

Hedging has protected the market like a suit of armour. But the suit will dissolve in just over three years! Get lean or get out! 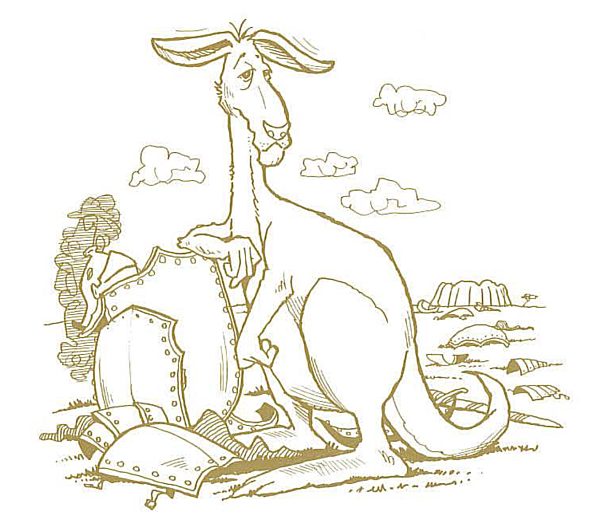 In the past 15 years, Australia's great gold rush was fuelled by the success in finding and mining numerous open pit deposits in the western part of the country, which proved relatively quick and economical to develop. More recently, sources of open-pit deposits have grown scarce. The death of high-cost open pit mines has begun a new cycle of lower-cost underground mining (evidenced by such large mines as Plutonic, Centenary, Bronzewing, Kanowna, Jundee and Ridgeway). The large open-cut mines (e.g. Telfer, Paddington and Boddington) have grown old and tired and helped push Australia's cash costs up.

In addition to the changing dynamics at the mine level, the sector has been financially crippled by the loss of the ability to sell forward. Insulated from the recent drop in the US$ gold price by a falling Australian dollar, the sector was nonetheless damaged by the loss of high-interest rates. Approximately 1,000 tonnes remain covered on hedge books - just over three years of production. It is after that time-frame that some drastic changes could occur.

A look at factors that have helped shape the current industry

Australian gold production commenced in earnest in the late 19th century and early 20th century. Production was sourced predominantly from underground mines where the gold mineralisation always had an obvious surface expression, i.e., Mount Charlotte, Norseman, Copperhead, Sons of Gwalia, Charters Towers, etc Technical limitations meant having to ignore oxide or weathered ore - ore found within the top 100 - 200 metres of the land surface which has reacted with air and water.

The second growth phase of Australia's production commenced in the early 1980s when rapid technological breakthrough (CIP technology) opened up the enormous potential to mine the oxide gold deposits. This was the start of Western Australia's second great gold rush.

Australia is just commencing its third phase of production, that is, a refocus on underground mining targets, while the larger surface open cuts begin to reach the end of their useful lives. Sophisticated geological equipment and ideas can now target ore bodies at depth, without a surface expression. As this phase has only just begun, Australia remains an open-pit country, but the growth in underground production is starting to pick up. Significant successes have been registering at such mines as Kanowan Belle, Bronzewing, Vera Nancy, Centenary, Ridgeway and Barton Deeps. We expect that the transition to lower-cost underground mining could take a few years to reduce Australia's average cash cost. 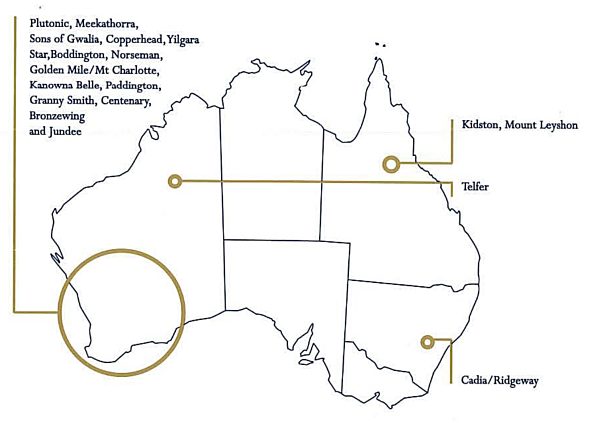 Today's discovery is tomorrow's production. Hence, if Australia is going to lower its costs of production, higher grade deposits must be located today.

Despite exploration expenditures running at record levels of A$600 m- A$650 m, results to date have been relatively disappointing. In general, only about 3m ounces of gold a year have been discovered (see table), versus Australia's annual production of just under, 10 m ounces per annum. Despite this, reserves are not declining, as mining companies have been rapidly expanding resources at existing mines. Unfortunately, these expansions are typically high cost.

The one bright spot is that the discovery rate of high-grade underground deposits is increasing. Some discoveries, such as Centenary, Ridgeway and Vera Nancy, are low cost and are large enough to lower Australia's average cash cost curve. Still, even with this positive factor, we don't expect a rush of discoveries so it is unlikely that our cost curve will change quickly. 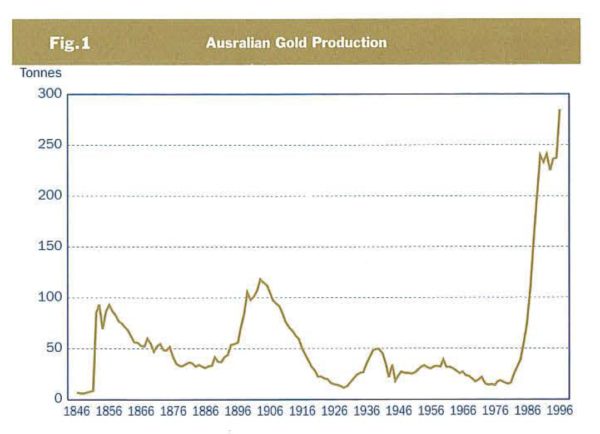 While the US$ gold price has fallen by 16% during 1997 ( from US $344/ oz to US$290/ oz), a corresponding 14% drop in the value of the Australian dollar has meant a drop of only 3.5% in the A$ gold price (from A$454/ oz to A$438/oz). Unfortunately for the mining sector, Australia has only seen exchange rates this low on roughly three brief occasions over the past 20 years. The risk is therefore definitely to the downside for the AS gold price over the next six to 12 months.

Ability to forward sell was our key competitive advantage

Forward selling by producers in the 1980s was lightly profitable and gave rise to an unquestioning acceptance of the technique in Australia. Companies did, indeed, achieve an average premium over the gold spot price of 20 - 30% over the past two years, despite the spot price falling from A$520/oz to A$440/oz.

A good forward sales price requires three variables: high-interest rates, a high gold price and low lease rates. In the 1980s, Australia had all three. Interest rates were roughly 15 %, gold prices traded as high as A$600 / oz and gold borrowing costs were well below 1%. Since that time, all the variables have shifted. Current Australian interest rates have dropped to around 6%, lower gold spot prices dominate (A$450/oz ) and gold lease rates are as high as 2%. The benefit s associated with forward selling has evaporated and, with them, a key competitive advantage for Australia n producers.

The response to this change in the forward selling environment has been a strong swing away from 'vanilla' forward sales towards the use of derivative structures - structures that are more complex to analyse and carry more risk. 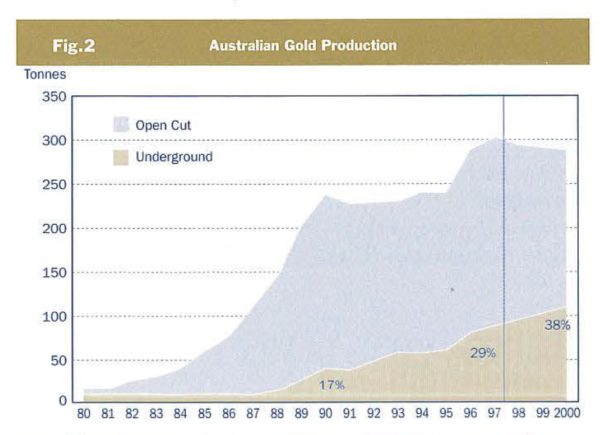 Has Australia got lazy on a rich diet of forward selling?

Hedging, as a treasury function, is a proven technique in maximising revenues. However, it appears to have removed the imperative to find and mine low-cost deposits. In short, the treasury function has become intermeshed with operational strategy. Hedge books have encouraged mines lower cut-off grades," with the focus being on volume growth rather than profit growth.

This volume- led strategy could be breaking down. Market sentiment has turned particularly nasty against companies that produce gold at greater than spot prices, only to be saved by a hedge book. To reflect this sentiment, most managers now comment on the importance of making decisions based on spot prices (excluding hedge gains from the development equation). Without hedging we expect the industry to radically change the way it mines gold (i.e. less production but at a lower cost).

The Australian gold sector would pass a health check, but only just. Despite having some excellent low-cost mines, a large proportion of Australia's production is maintained by hedging.

Average cash costs in Australia have remained relatively stable over the past two and a half years at around A$330 - A$350/oz. However, as the most recent cost curve shows (sec fig. I ), around 25% of our production occurs above current spot gold prices of A$440/oz. If this production were shut-in, Australia's average cash costs would quickly fall. 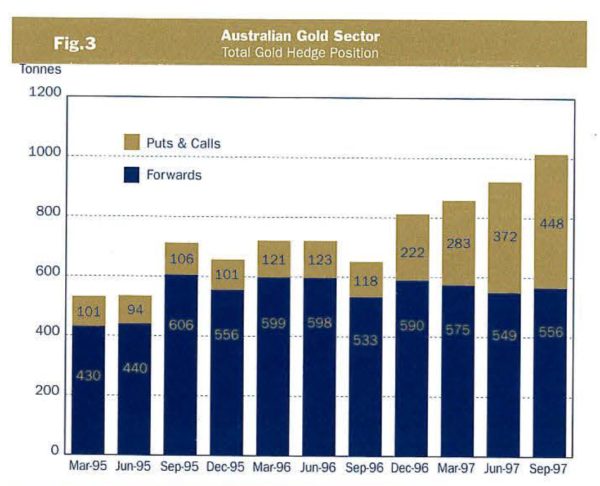 With average cash costs of around A$350/ oz and non-cash D&A (depreciation and amortisation) charges of around A$104 / o z, the sector would not be profitable if it had to rely on current spot prices of A$440 / oz. We estimate the current break-even cost for Australian production to be around A$500 / oz (some 14% above current spot prices) . Hence, the only way that Australia manages to report profit s (on average) is by delivering gold into hedge books at prices of around A$560 - A$580/ oz.

As has been previously noted, the hedge environment has changed to such a degree that whilst hedge books can grow in size, it is unlikely that the average deliverable prices can be maintained. Hence, after about three years, Australian companies will hit the wall with regards to profitability. If current spot prices were to continue for the next four years, we estimate that cash costs would have to drop below A$300 / oz to maintain profits (assuming non-­ cash P&L costs remain constant at around A$150 / oz).

Around 60% of Australia's production, or 150 tonnes, is unprofitable at current spot prices. This is the amount we sec subject to risk in the longer term.

Sector Response - what can be done? What may happen? 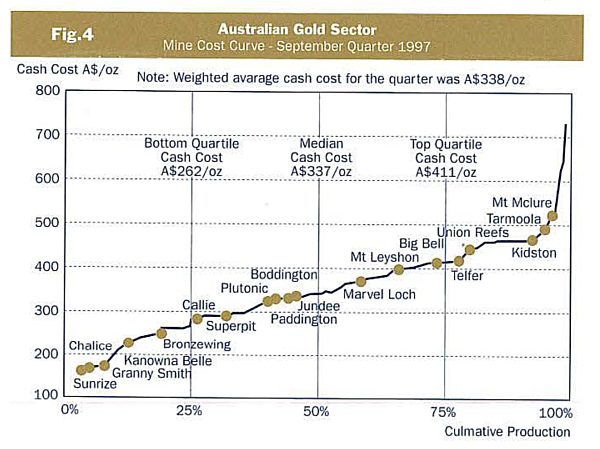 Get your house in order

Before mines begin to close, we expect to see a number of defensive measures initiated to lower costs. These include a reduction in corporate overheads, exploration budget cuts, deferral of waste removal programmes and reduced capital expenditures, to name a few. Other measures are outlined below. All of these measures typically have the effect of reducing mine life and eroding reserve/resource bases.

High-grading has a very negative connotation in the Australian market, being generally viewed as destroying the value of an ore body by being overly avaricious. Our view is that high-grading is a response to the external environment and at times is essential. We expect to see a number of operations begin high-grading their continue next year, resulting in reduced reserves and mine life.

Once these first steps are completed, the next stage probably involves closing out hedge books - a desperate option, as it involves cashing in a life insurance policy in order to survive. There will always be some companies that choose to close out hedge books, not as an act of desperation but as a bet that the gold price is too low.

This step is likely to be contemplated initially by larger companies having a portfolio of mine assets, rather than single mine companies, who would not take such a drastic step early on in the current cycle,

However, shutting down a mine is not an easy task. Key impediments include the expenses associated with closing out mining, power and labour contracts, as well as incurring environmental liabilities and longer-term care and maintenance costs.

The lower the gold price goes, the more likely it is that fund and managerial attention will be drawn to growing low -cost assets. For example, we expect to see expansion in Plutonic Underground (additional 5.4 tonnes), Great Central's Bronzewing mine (a further 2.3 tonnes) and Acacia's Sunrise mine (2.2 tonnes).

Depos its less than around A$320/oz are probably the only new assets that will be developed in the current environment. Newcrest should add around 14 tonnes of low-cost gold from Cadia and Ridgeway to Australia's total output (i.e., almost 5% of country production) by the year 2000. Likewise, the development of Plutonic's Centenary deposit will add a small amount of low -cost gold onto the market.

The future of the Australian gold sector depends directly on how long the current gold price is maintained. In the short term, one to three years, we expect only minor cuts of around 10-20 tonnes for a total of 280-290 tonnes, reflecting the protection of hedging. The lower figure reflects the net effect of the closure of the most marginal operations and the addition of some low -cost ounces at Ridgeway, Plutonic, Bronzewing, etc.

Medium-term (three to five years), we would ex pec t potential cuts to reach approximately 75 tonnes, thereby reducing total production to around 225 tonnes. The biggest cuts would be at operations with cash costs above the current spot price. Hedging would only be expected to provide protection for a limited number of companies.

Under a disaster scenario, where the current low price is maintained for over five years, we can envisage massive cuts (up to 60%) to Australia's production. Only those operations that can make a profit on spot prices can be maintained, which currently equates to roughly 40% of Australia's production. This forecast would bring total Australian production back to 1988 levels at 150 tonnes of gold.

Tim Churcher completed his Bachelor of Science (Geology) with distinction at the Royal Melbourne Institute of Technology) in 1986, prior to joining North Limited in 1987 as an exploration geologist in Kalgoorlie. He moved to Gold Mines of Kalgoorlie in 1988 as Project Geologist in the Forrestania region, where he was responsible for gold and nickel exploration. In 1990, Tim left Australia to study at the Royal School of Mines in the United Kingdom. Upon graduating with a Master’s of Science in Mineral Exploration, he commenced work with The Mining Journal in London as a research coordinator. During this period, he completed further studies at the Cranfield School of Management, graduating with a Master’s Degree in Business Administration.