Carbon and the Role of Banks 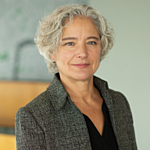 This is an updated version of Belinda’s keynote speech at the LBMA Sustainability and Responsible Sourcing Summit in London, 28-29 March 2022.

Belinda Ellington speaking at the Sustainability and Responsible Sourcing Summit, in London, March 2022. The Summit was jointly hosted by LBMA and the World Gold Council.

When I was preparing to give this speech on carbon and the role of banks, I was reminded of one of my daughters when she was about five years old who, in a state of existential rage, shouted at me: “What’s the point of you?”

Now that she’s considerably older and a little bit wiser, she realises the benefit of the parental bank and the competitive interest rates she gets from meeting her KPIs. My relationship with my daughter has changed to meet her needs and, likewise, so has banking over the last six years or so.

I want to look at how banks look differently at their investments and services in the light of environmental, social and governance (ESG) responsibilities, which have changed incredibly rapidly.

When I first sought out people involved with ESG at Citi, probably about six years ago, I was kindly directed towards a group of well-meaning people who were picking up litter at the weekend, and I said: “No, no, no, this isn’t what I’m talking about. There’s a tsunami of legislation and obligations which are going to hit us.”

Well, I’m pleased to say that like most large financial institutions, Citi has now warmly embraced the challenges of responding to climate change, and we’ve got a very well set-up infrastructure, including climate risk committees, that look at the risks and responsibilities of the bank – and products specifically designed to meet client ESG related needs.

We look at everything now through a ‘dual lens’ – considering the impact of the bank on the climate, and the climate on the bank. This means we look at all areas of investment and determine whether an investment has an additional risk due to climate change. For a bank that additional risk may then be translated into conventional market risk and credit risk.

Ultimately, banks are a service industry. We have clients at our core, and we are looking to help those clients achieve their own ESG goals, including their transition to net zero.

So, what are the drivers for moving towards net zero? I think, first of all there’s what you must do – adhering to compliance regimes, for example where you are required to measure and disclose climate impact or your carbon footprint. Then there’s what your customers and your investors would like you to do. This implies a voluntary element, but really it’s a Hobson’s choice. And then there’s what you do because of your own motivation to make a change.

Looking through your own dual lens, it’s necessary to consider not only your own compliance obligations and stakeholder pressure, but you’ve got to consider your entire value chain and think about the obligations and pressures on them, and then look back and see how that might impact your own organisation.

Take, for example, the shipping, airfreight, energy production, cement and steel industries in the EU. These are all going to be affected by legislation intended to limit their emissions and force them to pay for any residual emissions through the purchase of carbon allowances or offsets and/ or paying carbon border taxes. That will impose an addition cost on a carbon footprint. Who is going to absorb that increased cost? My prediction is that it will be carried along the chain from source to consumption. Effectively, the price of carbon will be added to everything that we consume.

The point is that whichever driver you’re looking at, we’re all moving towards the same destination where we must measure and account for the impact of the climate on us – and our impact on the climate – and then adapt. Anybody not on that journey risks being stranded.

Whatever your view on the science, it appears that all corporates will need to transition in order to survive.

We can neatly package climate risks, translating them into market risk and credit risk, but I also want to cast an eye towards litigation risk. There’s a litigation risk website called Climate Case Chart. It’s worth having a look at. If you are a potential polluter, it would be alarming. If you’re an environmental campaigner, well, it’s tub-thumpingly triumphant. The number of litigation cases has just exponentially grown.

At the moment, it tends to be focused on the fossil fuel industry. So, leaving aside simple failure to comply cases brought by regulators and other governing bodies, I think these cases fall into three ‘buckets’. The first bucket contains claims of deception, misrepresentation or, a word we all probably know now, Greenwashing. Then there are those seeking to attach responsibility for the past, present and also future impact on the environment. As the science gets better, the chain of causation gets shorter. In the third bucket are claims seeking to stop certain activities or to force people to comply with the Paris Agreement and reduce their emissions. Whatever your view on the science, or your motivation, to me it appears all organisations will need to transition towards net zero in order to survive.

So what does ‘transition’ mean? Firstly, we need the tech and the engineering, which many would argue is already here. We have carbon capture and sequestration, we have renewable energy, and hydrogen fuel cells. The issue is that this is all very expensive. But as the price of carbon increases and the price of polluting increases, the price of the tech becomes more attractive.

Secondly, you need the political willpower. Changing social values can change policies at government and at corporate level, but at times I think policies need to change first – and this is one of those times.

And thirdly, of course, you need the money. Enter the banks. Let’s think about what banks do. Banks do exactly the same as they always did, but with an added ESG benefit. There are ESG-linked derivatives, green bonds that issue a ‘greenium’, repo financing of green-starred securities, and green loans. They are the same financial solutions as they were before, but now they can be linked to genuine, measurable and verifiable KPIs of the transition to Net Zero.

That the KPIs are genuine, measurable and verifiable is crucial, because the shadow of litigation for greenwashing looms, and the impact can be serious. In addition, genuine KPIs are critical for the sustained integrity of ESG-linked financing. 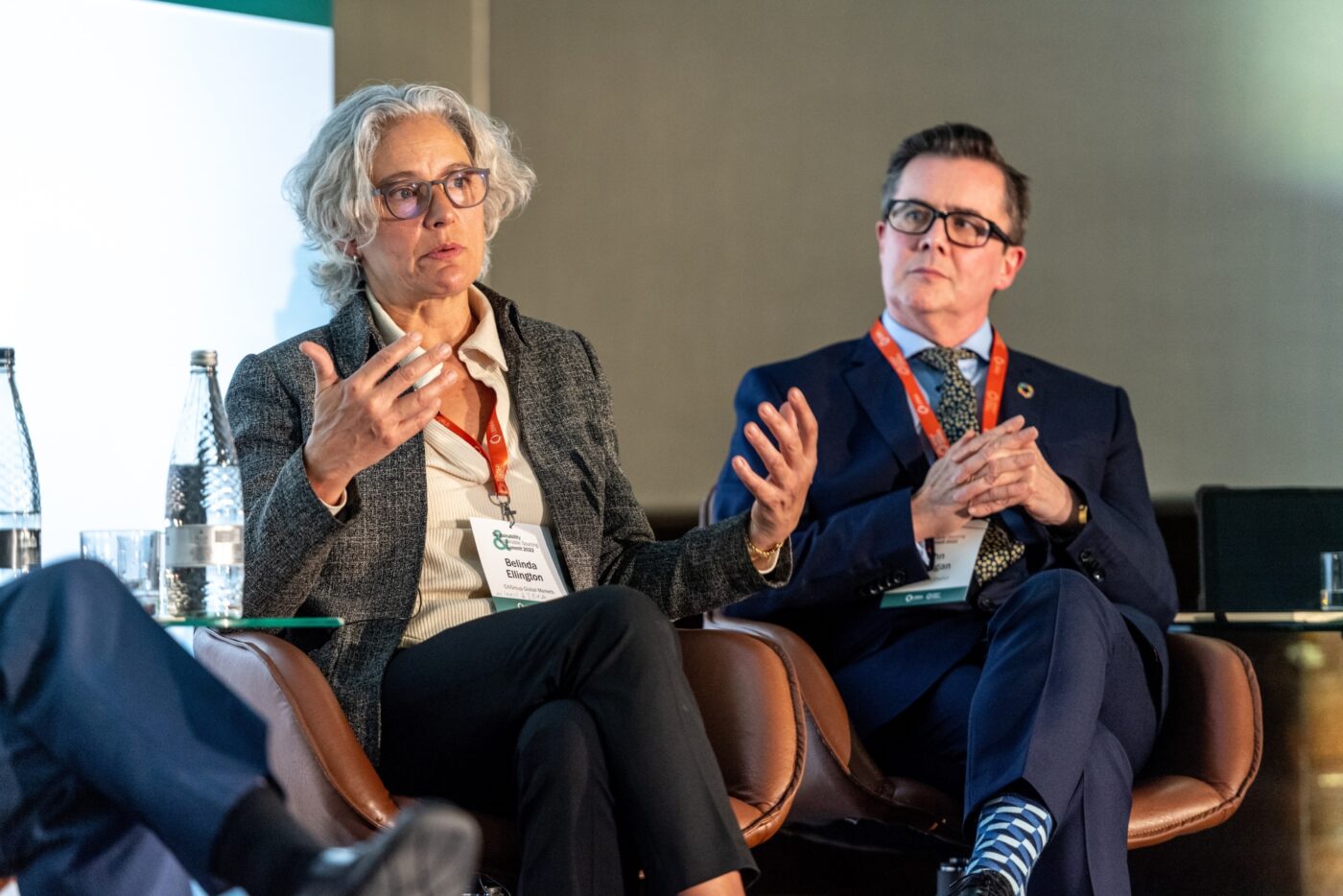 Belinda sat next to John Mulligan, Director of Market Relations and Climate Change Lead at the World Gold Council, during a panel session at the Sustainability & Responsible Sourcing Summit.

Turning to carbon markets; briefly, the difference between compliance and the voluntary markets. Compliance markets affect those sectors that have a regulatory obligation to offset their carbon footprint. Offsets tend to be issued or authorised by Governments and are sometimes called permits to pollute or carbon allowances. An organisation, for example in the energy sector in the EU, must account for their carbon footprint and submit carbon allowances equal to that footprint. The number of allowances issued into the sector is capped at the target for the sectoral carbon footprint and parties may trade those allowances, so they are commonly called ‘Cap and Trade’ systems. The EU ETS is an example.

In contrast, voluntary market participants have no regulatory obligation to offset, but this is a growing market. Offsets tend to be project based issued by certain Standards like Verra or the Gold Standard. A party may register a project with a Standard, demonstrating they intend to implement a methodology that will remove or reduce carbon emissions. When the project owner submits independent verification that those emissions have in fact been removed or reduced, the Standard will issue carbon credits equal to such removal or reduction. These carbon credits can then be sold for voluntary offsetting. A key difference is in some compliance markets like the EU ETS, project-based carbon credits are not eligible for use. It is easy to see that the purchase of the carbon credits funds the project and encourages financial flows to areas where reductions and removals can be made.

What banks do within both of those markets is what they do in all markets. They provide financing (for carbon credit projects, that might be by way of prepaid offtake agreements that provide the necessary seed funding); they intermediate between buyers and sellers, providing liquidity and market access; and they also provide price risk management.

Engage and Collaborate with Legislators

So what needs to be done? First of all, I think legislators need to collaborate, but it’s also essential that we engage and collaborate with those legislators. Wherever you have influence, you must engage to ensure there’s a workable legal framework built around ESG obligations and the carbon markets. And when I say the carbon markets, I also mean your obligation to disclose and report your own carbon account.

Wherever you have influence, you must engage to ensure there’s a workable legal framework built around ESG obligations and the carbon markets.

Another issue is that no one wants to be out front. Where do you position yourself? You may be cautious to self-impose higher standard than everybody else, because it could put you at a disadvantage. But, likewise, so could falling behind the pack.

What is clear is at the moment is that no one entity has the answers, so all could benefit from some homework sharing – being open on how to achieve your transitions to Net Zero.

With all the uncertainty, I think we have to see this as an opportunity. Our planet will survive, but our lifestyle might well become unsustainable. Let’s see this as an opportunity to deliver what society is demanding. Let’s see disclosure as an opportunity to show how you’re transitioning to attract the right kind of investment. And let’s set genuine paths to Net Zero with solid, measurable KPIs along the way, so you can take advantage of all that green-coloured money. Or you could just wait and see what happens, with your fingers crossed. If you do not spend on mitigation and adaption, I think you risk becoming a fossil yourself.

Let’s see this as an opportunity to deliver what society is demanding.

Belinda has been advising on commodities financing and markets for more than 20 years. With her experience, combined with her knowledge of the legal framework of the path to Net Zero, Belinda is part of the Citi team helping clients through this period of transition.