The search for new ways to trade markets is always relevant but should be profitable as well. In recent years, one of the most significant debates has been whether technical analysis can be used to trade markets profitably - whether these markets be equities, fixed income, FX or metals markets. The debate is basically between the fundamentalists, who argue that markets are ruled by issues of supply/demand, and technicians, who claim technical analysis can be successfully applied to all, or at least most, markets.

What is technical analysis? How does it fit into hypotheses of market operation such as the Efficient and Random Market Theories? What are the main methodologies that are currently being applied? And what are the results of such methodologies in terms of profitability?

By discussing these issues, we can then answer the final question that is relevant to all of us in the trading community - how can we use technical analysis to tackle the gold market profitably?

What Is Technical Analysis?

Technical analysis is the study of market action primarily through The use of charts for the purpose of predicting future price trends. It suggests that fundamental factors are totally discounted into the market price, that markets move in identifiable trends which are corrected periodically, and that history has a way of repeating itself. The technician believes that concentrating exclusively on price action, regardless of fundamental factors, is all that is required to form a view on the market because the fundamentals are already fully reflected in the price.

It isn't correct to state that a technician does not believe in supply and demand, or the fundamentals of a share, commodity or FX rate. He simply believes that since those fundamentals are reflected in the price, studying a whole raft of fundamental factors and then apportioning weight to each factor is an irrelevant exercise if studying the price alone produce similar or better results. In effect, if the price is declining, fundamentals must be bearish, and if prices are rising, fundamentals should be bullish.

Technical analysis is a direct challenge to the Random Walk Theory, which claims that price changes arc serially independent and that the current price is not a reliable indicator of future price direction. It challenges the Efficient Market hypothesis as well, which states that prices fluctuate around their intrinsic value and arc unpredictable. The reason technical analysts have a problem with this view is that it suggests that since market action is not repetitive or trending, but rather random, trends should not occur. Indeed, if such theories worked, then even fundamental forecasting techniques would be useless, as they indicate a pattern rather than randomness. Technical analysts make identifying trend moves their prime goal - hence the expression, 'the trend is your friend '. 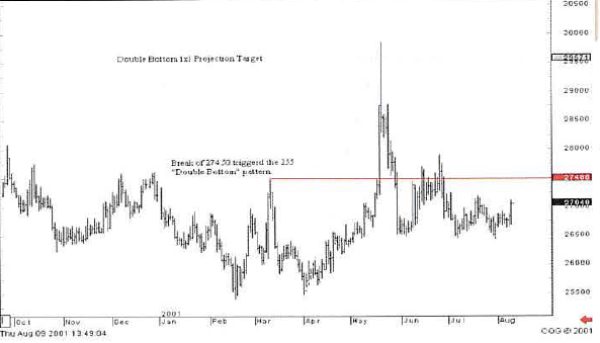 Main Methodologies and Their Results

The focus on Finding trend moves, and the notion that history repeats itself, explain the rationale behind predictive techniques such as Elliott Wave Theory and pattern analysis. These techniques suggest that because price movements are a reflection of crowd behaviour and that crowds effectively repeat the same mistakes at market peaks and troughs, the patterns that result From such behaviour can be used for their predictive ability.

Take patterns that arc the easiest to identify - head and shoulders and double bottoms, which have been used by classical chartists to identify major turning points in markets. For example, in the gold market, the presence of a double bottom formation between the $254 February 19th low and the $254.50 April 2nd low was used by many classical chartists to suggest that a stronger rally was likely to occur. The implication of the pattern was that once $275 (the high point between the two lows) was taken out during the rally of the week of 21 May, a further gain of $21 was likely to occur. Although fleeting, those gains did unfold with the market making a high around 298/299 that week.

Interestingly, efforts have been made to study the effectiveness of these patterns and whether they have predictive ability. One such study has been performed by Andrew Lo From MIT, who has suggested that modelling classical head and shouldc1-s and double top patterns often used by technical analysts did provide practical value, and as a result, could provide 'incremental information ' for trading purpose. Again, though such testing has not been applied to the gold market as far as we know, there should be no reason why it could not be, given that the same patterns frequently occur in gold.

On the Elliott Wave side of things, no such mechanically tested programs halve yet been applied. We won't elaborate on all the complexities of Elliott Wave theory here, but JP Morgan does utilise Elliott Wave theory as the cornerstone of our technically based predictions for gold and other markets. At present, the effectiveness of the technique relies heavily on the skill or the practitioner in identifying the trend and corrective wave sequences that compose the technique. However, there are mechanical programmes that are able to produce the expected price movements arising from previous price patterns, one of these, in particular, being the Advanced GET system.

In addition, followers or purely mechanical techniques, such as mining averages, also have a role to play. For example, if you back tested a crossover-based system of simple moving averages over the last 30 years, you would find that using such a system during that period actually provided substantial returns. We performed such a basic study on daily and weekly gold market data, using a variety of timeframes between 10 and 200 days (i.e. 10, 20, 30, 50, 100 and .WO), using the first 10-period average as the crossover. This means that we tested the crossing of the 10-period through the 20-period, then the 10- through the 30-period and so on, up to 200 periods. We found that using such a methodology would give positive returns in all combinations, over daily and weekly timeframes. 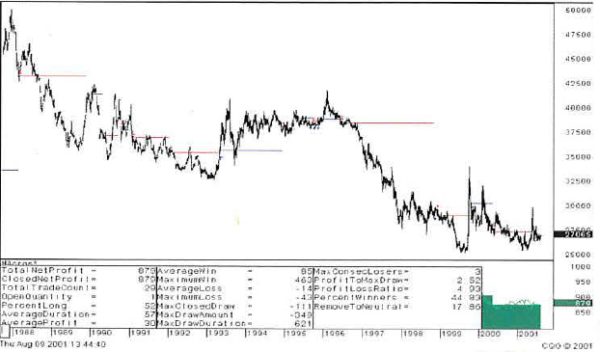 Interesting. But let's look more closely at one of the most successful combinations as a case in point and examine the issues.

Using a 10-week average crossing a 50-week average and holding a continuous position - long or short - during the period, the total net profit of such a system would be approximately $876 since the 1970s. This has achieved having only 44.83% winners, a profit-to- loss ratio of 4.88 times. However, there is a substantial difference between the gains made by the average winners (+$85) and the loss sustained by the average losers (-$ 14). Trade duration averaged 57 weeks, the ratio or profit to drawdowns (losses) was 2.51 times and the maximum drawdown was $43.

These statistics show a couple of things. Firstly, the gold market has trended heavily during the last 31 years, both up and down, hence suiting trend-following measures such as moving averages. However, there is no guarantee that the market will continue to do so. Secondly, almost all of the $876 of profit resulted from four trades between 28/9/70 and the 22/ 12/80, when profits of $766 were recorded. Results since that time have shown substantial variation. If you took away about 18% of the most successful trade recommendations, you would lose all the profit. Thirdly, over the last 31 years, there were only 29 trades registered by the system, suitable for longer-term players but less so for short-term players. Fourthly, holding such positions may impose substantial drawdowns in excess of those actually realised.

However what we can say is that using such a mechanical trading system did effectively achieve its function - to identify a trend and stay in it, with realised winners making far more than realised losers, thereby achieving substantial profits. Recent studies have concentrated on exactly these sorts of themes in order to establish whether technical analysis as a school of methodologies can provide benefits to the investment community.

Craig Ferguson has worked for JP Morgan for seven years, trading government bonds for two years, spot FX or 3 years, and has worked with JP Morgan on the technical analysis side since July 1999. He currently spends his time on commodities ( metals, grains, Softs), FX and European Fixed Income technicals.