Unobtanium The Rise, Fall and Future of Palladium 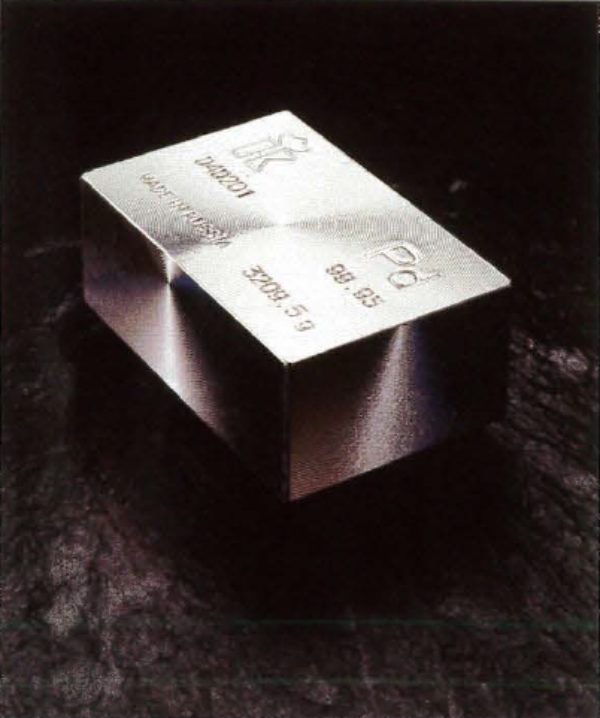 In 1989, that something special had been cold fusion, which early experiments, using palladium as a catalyst, suggested would be a clean and cheap source of energy. But when further experiments failed to duplicate these results, the price collapsed and for the next few years traded either side of $100 an ounce.

Something even more special has yet to come in 1997. May's $188 fixing was just the start of a dizzying climb that culminated on the 26th of January this year in a high fixing of $1194. Like all market bubbles, this one burst. Within the space of eight months, palladium has lost almost 70% of its value; it has since traded between $315 and $360. Unlike most bubbles, palladium's spectacular rise was not initially driven mainly by speculators though they later played a part - but by fundamentals.

Catalytic converters for controlling automobile emissions have been around since 1975. But increasingly strict emission standards - especially during the past decade have caused their usage to grow rapidly.

Both platinum and palladium can and have been used in catalytic converters - both make good catalysts and have similar chemical properties, although there are some differences. Platinum was initially the metal of choice: Johnson Matthey figures show that in 1992 gross usage in autocatalysts of platinum stood at 1,550,000 ounces, and palladium at 490,000. Palladium had a drawback versus platinum: it was susceptible to poisoning by the lead and sulphur in fuel. But by the mid - 1990s, there was virtually no lead left in fuel and sulphur levels had dropped dramatically.

At the same time, automobile manufacturers were coming under pressure to reduce hydrocarbon emissions - where palladium was more efficient. So began a drive by catalytic converter manufacturers Engelhard and Johnson Matthey to develop palladium-reliant converters - technically feasible, although it was at first necessary to use nearly twice as much palladium as platinum (though in the mid-1990s palladium was less than half the price of platinum). By 1995, usage of platinum and palladium in autocatalysts was nearly equal, and the following year, palladium moved ahead. 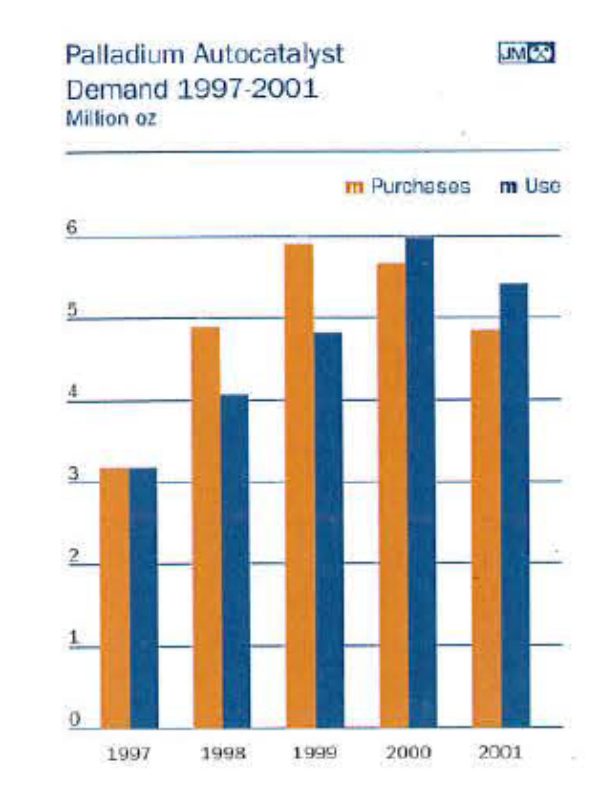 As with any commodity, the ever-present concern with using palladium was maintaining a reliable source, but this did not appear to be a problem. Most of the world's supply has come From Russia where, in addition to newly mined material, there were known stockpiles of unknown size that had been built up over a number of years as the price languished.

Palladium now became the metal of choice, not only for the automotive industry but also in electronics, where new technologies in devices such as laptop computers and mobile phones caused demand for palladium to surge. Dental usage, where palladium replaced more costly gold in alloys, was also growing.

In Soviet days, shipments of palladium - along with other precious metals and stones - were controlled by Komdragmet, which had the power to grant temporary export quotas until the official ones were authorised, thus ensuring that there were no interruptions to supplies while the Russian bureaucracy crunched along.

But in October 1996, as part of his campaign to simplify government bureaucracy, Russian President Boris Yeltsin abolished Komdragmet. But without it, only the president had the power to grant export quotas. A three -to -four-month backlog, therefore, developed, choking supplies to the growing market. The price soared from $120 to $200 an ounce.

Eventually, the export quotas were granted and Russian metal once more flowed. While that was the first time the market faced uncertainty about Russian supplies, it was by no means the last: watching and waiting for the Russians has become an annual event.

With demand increasing steadily and supplies uncertain, palladium quickly became an attractive investment. Among others, the metal caught the attention of hedge funds, most notably the Tiger Fund.

As the price rose during the '95 -'98 period, Russia shipped increasingly large amounts of metal. Johnson Matthey estimates that fresh production probably remained at a constant three million ounces during that period, but exports were as high as 5,800,000 ounces in 1998. It was clear that the country's palladium stockpiles were being tapped. What was still not at all clear was how large they were or therefore how long they could continue to supply the market's needs.

When the hedge funds began buying, the metal they absorbed wasn't lent to the market, thus putting pressure on lease rates. This affected both industrial users needing to borrow metal and trade houses, which had tended to lend long and borrow short to maximise returns (palladium traditionally had very low short-term rates). The resulting scramble for short-term metal pushed rates up as high as 150-200% - it was more economical to buy than to borrow. The price had nowhere to go but up.

The Thrill is Gone

But industrial users were becoming disenchanted with the undependable and unpredictable metal. Dave Andres, head of commodity purchasing at GM, began to call palladium 'unobtainium' and actively sought to reduce his company's dependence on it, as did other automobile manufacturers. The dental industry partially returned to cheaper gold-based alloys.

In the electronics industry, making substitutions wasn't easy at first the sector was growing so strongly that even when a substitute for one usage was found, demand in other applications continued to expand, forcing the industry to continue its purchasing. But more recently, the sector has begun to slow with the global economic downturn. In their recently released Interim Review, Johnson Matthey forecasts that electronics demand for 2001 will be less than half of last year's.

The automotive industry's usage of metal exceeded their purchases during 2000 and 2001 for the first time (see chart ). The reason? During the late 1990s, in order to reduce their exposure to the market during periods of extreme lightness, they were able to supply part of their needs from their own stockpiles. For speculators too, palladium lost its lustre. The Tiger Fund cashed out, somewhat prematurely, and not many have been keen to take its place. Volumes remain weak on T COM - once a very liquid exchange where 100,000 -200,000 ounces might trade in a session - and are even weaker on NYMEX, after margins were raised continually in response to the sharp volatility. And spreads in the open market widened so far that those with business to transact preferred to wait for the twice-daily fixings.

Prospects are mixed for the market next year. JM forecasts the market to move into a surplus in 2001, the first time since 1996. On the demand side, usage of palladium in catalytic converters has fallen sharply, under the combined pressure of substitution/thrifting and the US economic slowdown. But palladium still has a future in autocatalysts: it is the most effective catalyst for reducing hydrocarbon emissions, and limits on these pollutants continue to tighten in the US.

On the supply side, the Russians have recently reiterated that with prices weak, they have no immediate plans to return to the spot market, though they continue to deliver on long-term contracts. However, they may well find it difficult to stay away if purchased additional stocks beyond their immediate needs if revenues from oil sales aren't satisfactory.

The latest application for palladium may be a new cigarette, recently on sale in the US, which claims to use the metal to reduce toxins. But unless one day every cigarette produced contains palladium, the result is unlikely to match even the brief excitement cold fusion once generated.