The Advent of Hedge Funds in the Gold Sector

The late great Julian Baring once said that he didn’t care much for hedging, since behind every hedge there is invariably a ditch and ditches are invariably wet and miserable places. I hasten to add that he was directing his fire at hedging in the mining company context – not the hedge fund context.

Nevertheless, I often wonder what Julian would have made of the application of hedge fund strategies in the gold mining sector. He was continuously innovating, looking for improvements in his analysis techniques of companies and striving to identify moneymaking opportunities. I think for this reason he would be intrigued – maybe even supportive – whilst reminding us to be sure not to lose sight of what we pay per ounce of gold versus what we get!

Hedge funds are by no means a new financial invention – as far back as the 1920s, investors were constructing portfolios composed of an equal dollar value of longs and shorts to ‘hedge’ themselves against the vagaries of the market.

The term applies to a multitude of different investment management approaches, but generally speaking, the common denominator is that hedge funds typically undertake some forms of shorting equities or indices in order to remove/reduce market risk, distinguishing them from a normal long only management approach. By reducing market risk, in theory the portfolio’s return will be purely down to the manager’s skills – and not market movement. Such an approach lowers the volatility of the portfolio, which appeals particularly to very wealthy investors who like the idea of capital preservation whilst hopefully making decent but steady returns on top.

In recent years, hedge funds have seen phenomenal growth in assets under management, now estimated to be at $600 billion. Doubtless the equities bear market has refocused investors’ attention on investment products that are intended to preserve capital. Although the growth rate has slowed recently, the hedge fund sector is one of the few areas of the investment management industry still making decent headway.

Although hedge funds have seen remarkable growth, they still remain a tiny part of the overall assets under management globally – probably under 1%. Of course, there have been a few notable corpses in the hedge fund world, not least Long Term Capital Management (LTCM).

The Holy Grail of the hedge fund industry has been to persuade pension funds that hedge funds represent an alternative asset class that should be considered for an allocation of assets. If the hedge fund industry can be successful in making this case, hedge fund assets under management could multiply several fold from here. News that CALPERS – one of the largest pension funds in the US – plans to invest $1 billion in hedge funds is significant. A discussion paper published by the FSA in the UK suggests that regulators are increasingly prepared to debate the issue, even if full blown retaliation of hedge funds may still be some way off.

Are hedge funds just another bubble, and will they become unfashionable with investors as soon as equities markets head upwards? Only time will tell, but as they have been in existence for so long my instinct is that they are here to stay. Many money managers who grew frustrated at running long-only money in bear markets and have started to undertake shorting strategies will be unwilling to give up this practice once it has proved profitable.

Indeed, sources in the Canadian broking world tell me that they have seen the number of accounts willing to short natural resources equities increase several fold in the past few years alone. Announcements have been made that two new gold funds are launching in Canada that will undertake limited shorting whilst retaining significant exposure to the market – so-called hybrid funds. Hybrid funds are a recognition that managers who claim to add value through stock selection, as many claim to do, can add even more value by undertaking shorting of the least preferred stocks in their investment universe. If funds that do undertake shorting are successful, gold ‘hedge-funds’ will become an ever-more important source of capital to gold mining companies. 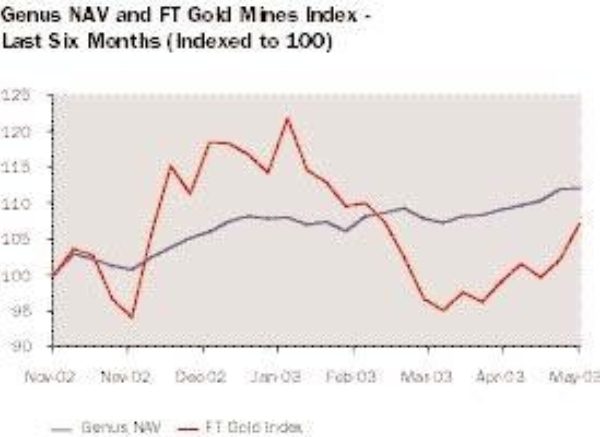 Volatility of gold mining equities is likely to increase further due to the activities of hedge funds, as companies which report bad news get punished by the market more severely than in a pre-hedge-fund world. This is good news for stock pickers and value investors – for them, volatility is an opportunity. Recent punishing falls in stocks like Meridian, Royal Gold and Agnico Eagle have no doubt been exacerbated by hedge fund short selling.

On the flip side hedge fund investors tend to be more aggressive in mining finance opportunities and offer companies access to capital that perhaps would otherwise not have been available. Durban Deeps successfully offered a U$60 million convertible last year which reportedly went almost entirely to hedge funds (because of the optionality provided by the convertibility)– indeed they definitely were the price setters in the deal, and the company paid quite a high price in terms of short-term volatility, as hedge fund investors shorted the ordinary shares to buy the convertible issue.

The swathe of special warrant-bought deal financings completed by Canadian brokers on behalf of their gold mining company clients in 2002 were healthily subscribed for by hedge funds, which generally seek to acquire optionality on a market at minimal capital risk: utilisation of options, warrants and convertibles allows them to minimise volatility whilst retaining significant directional exposure to a market. In other words, acquiring optionality allows funds to better manage risk and optimise risk-adjusted returns for the portfolio.

...And Reasons to be Careful

Table 1 summarises some of the pros and cons of the hedge fund approach relative to the long-only approach. For investors seeking to maximise the portfolio insurance characteristics of gold and gold equities, a modest exposure to a long-only fund may make most sense. However, other investors wishing to emphasise exposure to the stock-picking skills of a manager over an outright directional view on gold may prefer the lower volatility alternative of a hedge fund approach. It’s horses for courses!

From a gold mining company perspective, issues worth consideration are listed in Table 2. Optimising the cost of financing using the equity markets needs to be considered carefully given the demand for optionality by hedge funds. Monitoring the borrowability of a company’s stock and, if available, the fluctuations in borrowing costs and disclosed short positions will provide a company more of a window into the vagaries of their share price performance. This fact introduces some bias against the large-cap gold stocks and in favour of emerging producers.

In addition to two new gold hedge funds being launched in Canada, in Europe, United European Bank (UEB), a subsidiary of BNP Paribas, has just launched an innovative multi-manager fund called the UEB Gold Hedge Fund. It comprises three compartments – long-only gold equities, long-short gold equities and Commodities Trading Adviser (a fund which typically uses a systematic basis to determine its trades). Its objective is to provide steadier returns than pure long-only gold funds by capitalising on sector volatility through long-short and CTA strategies whilst retaining upside beta to gold through the long only compartment. (Baker Steel has been chosen as one of the managers for this fund).

Considering the above, I would conclude that hedge funds are in a secular up trend and specialist gold/natural resources equity fund managers are increasingly undertaking shorting, which likely will increase sector volatility further. However, hedge funds clearly are contributing to liquidity and access to capital for gold mining companies. Like it or loath it, investors and gold mining companies alike will have to learn to live with the evolution in capital markets.

Trevor Steel was a senior portfolio manager at Merrill Lynch Investment Managers (MLIM) until 2001, when he and a senior colleague, David Baker, established Baker Steel Capital

While at MLIM, Trevor helped build its highly respected natural resources team and was specifically responsible for managing the award-winning ML World Gold Fund – from its inception in 1995 until he left MLIM.

A regular speaker at conferences, Trevor has often been quoted in the press and has appeared on television. Trevor is a member of the Association for Investment Management and Research. He holds a degree in geology from London’s Royal School of Mines.