I shall focus specifically on the LBMA certified silver reference materials. When we started our analyses, I was expecting it to be a pretty straightforward process. We believed that we knew how to analyse silver, but discovered in the process that the analysis was much more difficult than expected. We had to change our methods so much that we are now proposing a change to the international standard for the analysis of silver. 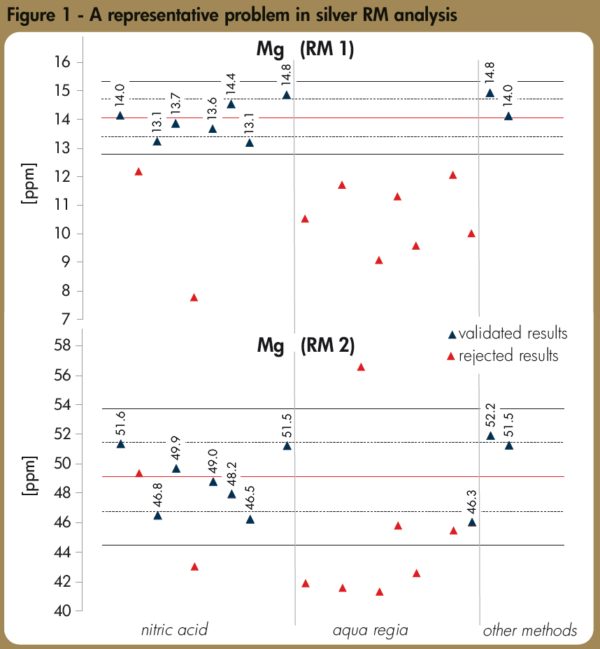 Normally two techniques are used. First, there is analysis as a solid, which is typically done by spark OES spectrometry, a very fast method with several problems. The calibration is complex, you can only analyse a limited number of elements and it is only appropriate for specific shapes. The second technique is to analyse material as a solution. This is a precise, versatile method – at least it can be precise. The only problem is that you need to dissolve the material quantitatively.

For silver, however, the same procedure will produce a solid (silver chloride) and a supernatant solution. You can analyse the solution; or you can use an alternative acid, such as dilute nitric acid, to produce a limpid solution and analyse that instead.

Let me show you which results were obtained. Figure 1 focuses on magnesium analysed in silver for RM1 and RM2. Each triangle is a result given by a laboratory. There are more than 10 of them because, as I said, laboratories were allowed to use several methods. The results were collated depending on the method used for the preparation – using nitric acid, aqua regia or any alternative method. The results in blue were those that were accepted. The results in red were those that were rejected. Results were rejected either because the technique was deemed afterwards to be inappropriate or because they were outliers following certain statistical tests that we performed.

If we take magnesium, for example, we see that the results obtained from nitric acid are pretty coherent, with all measurements very close to the average value. The same goes for higher levels of magnesium. However, if we check the results from aqua regia, we see that dispersion is much higher and the absolute value is also lower. This is explained by the fact that magnesium will adsorb in silver chloride and obviously will lead to a lower absolute value. 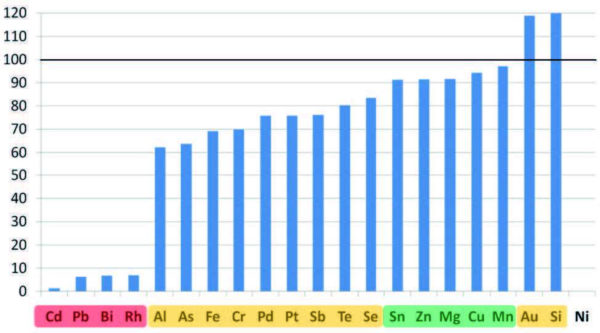 Which Method to Use?

When we saw those results, the first question was: could we just use the nitric acid results for some elements and the aqua regia results for other elements? The short answer is, unfortunately, no. In nitric acid, we have some elements that are perfectly stable. Take copper: the sample is prepared at time zero, and since it usually takes two to three hours before analysis is performed, the first concentration is obtained after three hours. The solution is analysed again after 18 hours, after 36 hours, and this continues for four days, showing results that are completely consistent and do not change over time. The same goes for certain elements such as bismuth, antimony, zinc and so on.

However, if we take other elements, we see that they are not as stable as we had hoped. Nickel, for example: starting with a value of 72 ppm after three hours, it dropped to 60 ppm after a day and half. The same trend occurs with several elements; indeed gold and rhodium will completely disappear after a day and a half. The problem is that even if you measure that solution even after only two, three or four hours, there is obviously a decrease, so you cannot be sure that the concentration you are measuring is the real concentration. Let us be honest, in daily work in the laboratory, if you lose one ppm of one of the trace elements, it is not such an issue, but for a reference material – something we want to be certified – this is obviously unacceptable.

Therefore, the conclusion for this first part is that, in nitric acid, we not only have a solubility problem, we also have some kinetic issues to consider.

We then tried the method ISO standard 15096, the latest 2008 version. As it is an ISO standard method, we expected this to work very well. The standard is intended for jewellery analysis of silver with purity higher than 999‰, but obviously it can be used for any silver alloy of sufficient purity. The procedure is straightforward: weigh a certain amount of the test sample, dissolve it in nitric acid, heat it and then add HCl to precipitate silver chloride. After filtration and washing of this precipitate, and addition of extra HCl, the liquid phase is analysed by ICP-OES.

We used this procedure on the silver reference materials and several silver standards that we had made ourselves. Figure 2 shows the recovery rate. Basically, if the method works, the result should be 100% for each element. The first thing we see is that this method absolutely does not work for four elements: cadmium, lead, bismuth and rhodium have less than 10% recovery. This is a clear sign that those four elements cannot be measured with this ISO standard. In fact, not only those four, but most of the elements (15 out of 20), give results that are not really useable. If we take iron, for example, we have a 70% recovery rate, which means a 30% error. This shows that this approach is not applicable for the analysis of our silver standards.

What we found in the end was that some elements could neither be determined in nitric acid nor in aqua regia. This was the case for rhodium, which is an extremely difficult element to measure in silver. Therefore, what you see here is that basically most of the results are completely out of range. But if you look at the third part of the graphic called ‘other methods’, it seems that this time, results are more coherent.

A New Approach for the Analysis of Silver

During the course of this project, which lasted over more than a year, we had to develop a new method that would allow us to measure all the elements quantitatively. We started with a partial dissolution in nitric acid. Looking at the sample tubes, it appeared that the solutions could contain some suspensions, which can be isolated by centrifugation. This is more effective than filtration as there is no risk of contamination and it produces a liquid phase that can be analysed immediately. Then we dissolved the solid residue in aqua regia and analysed that solution, too. For each element, the exact value is the sum of both analyses.

What results did we find? Gold is found exclusively in the solid residue. Rhodium is found mostly in the solid residue, at about 80%. Many elements were found in both solutions, which means that they are present both in the nitric acid solution and in the residue. Other elements were found almost exclusively in the nitric solution. While this also depends on their relative concentration, it still gives a good idea of where elements can be found.

The dissolution of the solid residue can be performed under pressure. This is mandatory for quantitative measurement of rhodium. If you do not use pressure, you will not dissolve most of the rhodium.

This method is valid for elements that are only partially dissolved, which was the big issue with the two previously used methods.