This year, the Singapore Bullion Market Association (SBMA) celebrates a significant milestone – our silver jubilee. What started as an informal association acting on behalf of the bullion community, which only met occasionally for business networking, now plays a pivotal role in the development of Singapore as an ASEAN precious metals hub. 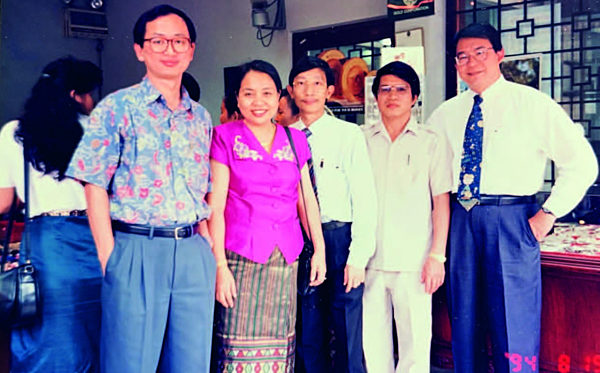 Visit to Ventiane Market, Laos, with Mr and Mrs Konfa Phoummasak, owners of Fa Jewellery, in 1994.

This journey has been a long but exciting one, and it would have not been possible without the support of industry stakeholders and our members.

In 1993, at the age of 40 and after eight exciting years with the Royal Canadian Mint in Asia, I emigrated with my family to Singapore to take on the position of Regional Manager at the World Gold Council. While engaging in market development work there, I joined SBMA at its inception as its honorary secretary.

This was the start of my decades-long involvement with the association, which continued even after I left the World Gold Council.

In 2015, I was invited to lead the revival of SBMA and champion Singapore as a gold hub for ASEAN and beyond, again on an honorary basis, with the help of a small team. This has been a role in which I have been very happy to contribute by growing the sector in both Singapore and the region, as well as grooming the next generation of market development professionals. 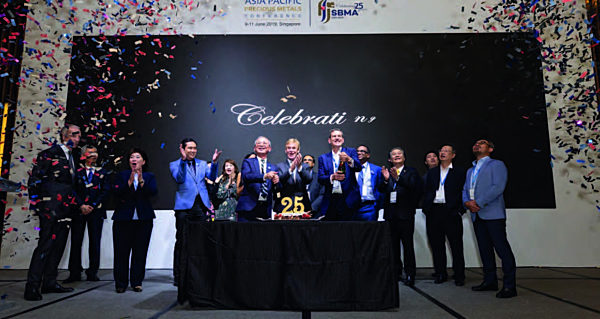 SBMA celebrates its 25th anniversary during the Gala Dinner at the 3rd APPMC in 2019.

SBMA was formally registered as an association in December 1993 with an initial membership of 16 corporate members from the precious metals industry. In early 1994 SBMA began to engage with the Goods & Services Tax (GST) Working Committee in discussions relating to the exclusion of GST on precious metals and to develop Singapore as a bullion hub for the Asia Pacific region.

From its inception, we contributed to discussions and deliberations between the bullion community and the Inland Revenue Authority of Singapore (IRAS). We convinced IRAS to exempt re-exported physical gold bars from GST through a special scheme available to qualified bullion banks and houses, which took effect on 1 April 1994.

The long bear market in the late 1990s, which led to the departure of key personnel in the gold industry and the closure of gold desks at many international bullion houses and banks, rendered SBMA inactive from 2000 to 2008, although it remained a registered association. However, in the advent of the financial crisis in 2008 and its aftermath, there were growing activities in the bullion market and players that had left the market re-entered Singapore and became active again.

In February 2012, Singapore said it would exempt investment-grade bullion and precious metals (IPM) from GST (currently 7%) to encourage the growth of refining, trading, clearance, custodian/storage services, market-facing institutions and retail investors in the country’s bid to become a gold hub. The market took the announcement positively, and the bill, which exempted IPM from GST, came into effect on 1 October 2012.

This was the result of extensive efforts initiated by government agency IE Singapore, the predecessor of Enterprise Singapore, which engaged with members of the bullion community such as the World Gold Council, commercial banks and bullion houses as early as 2010 to look for ways to develop Singapore as a hub for financial market activities such as oil and precious metals.

With the support of IE Singapore, the World Gold Council and key bullion players took the lead to revive SBMA and engage with various government agencies and the international bullion market in pursuing the proposition of developing Singapore into a global gold-trading hub alongside London and Zurich, amid strong Asian demand. It was not until 2015 that SBMA had its first full-time staff and its own offices. Prior to this, the association’s secretariat and registered address was the World Gold Council’s Singapore office. 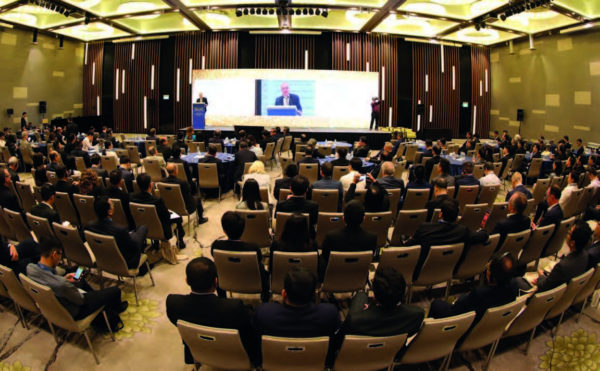 Paul Fisher, Chairman of LBMA addressing the opening of the 2nd APPMC in 2018.

SBMA currently has 46 corporate members and our membership base is still growing. SBMA’s nine-member Management Committee is elected at the Annual General Meeting (AGM) for a two-year tenure and meets once a month.

Industry milestones since our relaunch include the 2010 opening of the Singapore Freeport, a free trade zone at Changi Airport that facilitates the storage and movement of gold, the lifting of GST on investment precious metals in 2012 and the opening of Metalor Technologies Singapore, the first world-class bullion manufacturing and refining facility in the country.

Our annual Asia Pacific Precious Metals Conference (APPMC) has been well attended since its inaugural edition in 2017 and this year’s conference welcomed more than 390 delegates from 182 companies and 27 countries, including a contingent of more than 100 from China and Hong Kong. Additionally, the conference saw sizeable participation from industry counterparts in Australia, the world’s second-largest gold producer and one of the largest suppliers to Asia’s hungry gold markets.

The strong turnout by the international bullion community this year reflects the vibrant regional market and growing role Singapore has in connecting regional players with international markets. In particular, the response to the first Kilobar Pavilion, in which 10 gold refiners displayed and marketed their kilobars, was a strong indicator that Singapore has become an important marketplace for global precious metal market players.

The third APPMC, held in June 2019, was also an opportunity for SBMA to celebrate its 25th anniversary with our members and other key industry stakeholders. Marking this occasion was SBMA’s founding Chairman and former Global Head of Precious Metals at TD Bank, Tim Gardiner, who delivered the conference’s opening address alongside Martin Huxley, SBMA’s current Chairman.

The topics that garnered the most discussion included the effects that the ongoing US-China trade war will have on this sector, the changes that digital gold is bringing to the industry and the role of gold in investment portfolios. In line with the theme of the conference, environmental, social and governance issues in the precious metals sector were also discussed in detail, with the session on revolutionising the precious metals supply chain providing lively debate on responsible mining and responsible sourcing, as well as the challenges refiners face when addressing these issues.

Participants also discussed the possibilities and opportunities for increased regional connectivity and mutual benefits in the gold jewellery and financing sectors between China and Southeast Asian countries. There is already US$600 billion in trade between China and ASEAN annually, and there is growing investment in ASEAN by China.

US$600 billion in trade between China and ASEAN annually

Our vision is for Singapore to be a global financial and physical trading hub for precious metals – the most vibrant one in Asia, with the respective strengths of London and Zurich. Our mission is to assist member companies in business, commercial and economic activities, promote them commercially, facilitate research and the exchange of commercial and academic knowledge about the gold market, and monitor gold market developments.

SBMA will continue to work with stakeholders on introducing a benchmark gold price in an Asian time zone to cater to the region’s gold market and help build Singapore into an efficient trading, clearing and storage centre that attracts key players in the international bullion community.

This is a big step forward that requires the support of the authorities and the co-operation of key bullion players in the region.

With Singapore at the forefront of digital financial services in the region, we hope to engage stakeholders – both regulators and users – to promote the use of physical gold as a tangible asset to back the units created in the crypto space.

We are also in discussions with key gold jewellery manufacturers in China (the biggest in the world) to use Singapore as a hub to connect to the consumer base in Southeast Asiaand beyond, and to service countries along the Belt and Road route.

At the same time, we want to become a thought and innovation leader for the Asia Pacific bullion market. APPMC will no doubt be crucial for this as it continues to attract bullion market players to Singapore and grows in importance on the bullion market calendar, particularly for global players intending to use Singapore as a springboard for growth in Asia Pacific.

Albert Cheng, CEO, Singapore Bullion Market Association, International Advisor, Shanghai Gold Exchange. Albert Cheng joined the World Gold Council (WGC) in March 1993 as Regional Manager, becoming Managing Director, Far East in 2003. He retired at the end of March 2015 and has been appointed as Advisor to World Gold Council since then. In addition, he was appointed to the panel of the 18 International Advisors to the Shanghai Gold Exchange in 2019 again, a position he has held since its inception in 2002.

Albert’s marketing career began with Dentsu Young & Rubicam, Hong Kong in the early 80’s, moved on to gold marketing in July, 1985 when he joined the Royal Canadian Mint as Regional Manager for HK/Southeast Asia. He was appointed honorary CEO of Singapore Bullion Market Association in November 2015 after retirement