1999 was a year of both hope and despair for those looking for an end to the bear market that has gripped gold in recent years. The price tumbled towards $250/oz, recording a 20-year low in July, before making a remarkable comeback in October. However, as in 1998, gold's decline was only temporarily reversed, with the price rally in 1999 being based largely on short-covering rather than new money coming in.

Despair prevailed in July as gold prices dipped to a historic low of $252.80/ oz. Throughout the first nine months, market sentiment was deeply negative with a sequence of announcements confirming the market's fears about the official sector supply. Heavy sales from this source, coupled with extensive "defensive" hedging from producers, kept the price under severe pressure, particularly in the third quarter. A modest recovery in the price was underpinned by the successful campaign against the original IMF gold sales proposal and the strength of demand at the second UK auction. Hope rose at the end of September as the price surged in the wake of the European Agreement on Gold, setting a limit on sales and lending from the 15 signatory countries over the next five years. The powerful price rally that followed took the price to a high of $325.50/oz in October, prompting some to declare a new era for gold. However, this was not to be: the price rapidly fell back below $300/oz by the end of October.

It seems that gold's journey into the .5320s in October was a classic example of a market overshooting on the upside, just as it probably undershot on the downside earlier in the year when gold was in the $250s. That the price was unsustainable much above $300 was cleared from, firstly, the collapse of physical demands and, secondly the absence of any real investor buying interest, with the large swing to the net investment in the second half essentially reflecting short-covering by funds and dealers 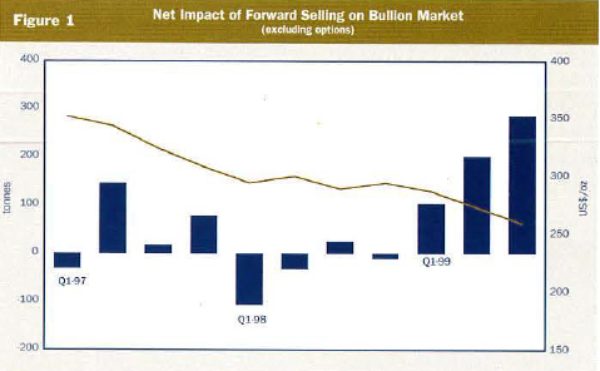 Mobilisation of gold by producers and central banks dominated the supply side in 1999. Concern that central bank supply might swamp the market and send the price lower contributed to unprecedented volumes of producer hedging in the first nine months of the year (producers had added 590 tonnes to their forward sales positions by the end of September; see Figure 1). The announcement of the European Agreement on Gold on 26 September resulted in a dramatic improvement in sentiment, reflected in an impressive price rally. Paradoxically, the unexpected sharp increase in price triggered a crisis for several hedged producers. Perceptions of an improved outlook for gold prompted a widespread restructuring of hedge books and buying back of previously established positions during the last three months.

As for the official sector, its impact on the price was not limited to the effect that announcements, both positive and negative, had on market sentiment. GFMS research indicates that 1999 witnessed a high level of official sector sales from various countries (the Summary Table gives an estimate of net sales of 441 tonnes in 1999, almost 90% of them in the second half) Whilst some of these transactions were publicly disclosed - for example, the three auctions by the UK Treasury, the ongoing reductions in Canada's gold holdings and sales by the Netherlands central bank - in several other cases sales were made with no announcement either before or after the event. These transactions are unlikely to be ever reflected in official statistics.

Mine production increased by 1% last year, even with prices at historic lows, although the growth rate slowed during the second half. Such growth as there was came from a handful of very large­scale, low-cost mines in countries such as Peru, Indonesia and Argentina, while the mining sectors of the "Big Four" producing countries - South Africa, the United States, Australia and Canada - all contracted. Production costs remained low during 1999 reported total cash costs averaged $197/oz in the first nine months. Following on the record levels of scrapped gold in 1998, in the wake of the currency collapse in several East Asian countries, the summary table shows that last year global scrap supply fell back to normal levels, totalling 624 tonnes (468 tonnes less than in 1998). 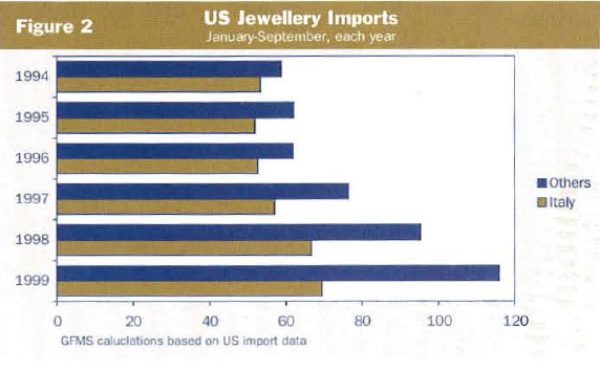 Last year's 1.4% fall in fabrication was entirely due to a 2.8% decline in jewellery demand, which more than offset robust growth in coins and electronics.

In spite of the average dollar price falling 5% year-on-year to a new 20-year low, jewellery demand in some of the largest consuming regions was poor. Part of the decline can be attributed to the price spike in October, but other forces, including low oil prices over the past few years and rising competition from, for example, gem-set jewellery, also played a role. The Indian subcontinent and the Middle East both recorded similar-sized falls in absolute (of over 70 tonnes) and percentage (over 10%) terms, whilst jewellery fabrication in China fell by a more modest 6%, or 10 tonnes.

The output of jewellery in Europe was adversely affected by lower Italian production for export and the home market.

A strong recovery in East Asian demand part! offset some of the above - -mentioned declines. Indonesia, Thai land and Korea all recovered markedly in 1999, helping to push up East Asian fabrication by over 20%, or close to I 00 tonnes. North American fabrication also rose strongly, by no less than 8% year-on-year. GFM initial projections indicate that jeweller consumption increased to almost 400 tonnes in 1999, with official imports increasing by around 11%. The graph shows that US jewellery imports from January to September were up modestly last year in the case of Italy (around 4% year-on-year) whereas they soared from the rest of the world (up 21% year-on-year). 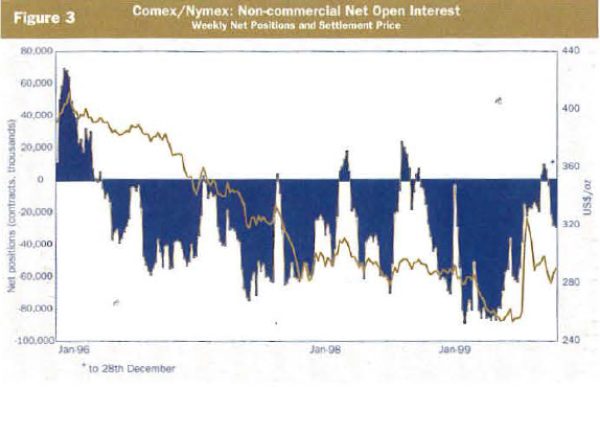 Significant growth occurred in other areas of gold demand. Bar­ hoarding demand increased by over 80% to over 200 tonnes in 1999 (see Summary Table). Growth in East Asian hoarding demand (which moved from dishoarding in 1998 back to net hoarding in 1999) more than offset the sharp falls in the Indian sub-continent and China. Coin fabrication rose by 8% in 1999, whilst gold use in electronics rose by over 9% year-on-year, driven by strong demand in both East Asia and America.

Although the European Agreement on Gold may well lend support to the price in the medium term, this is unlikely to be the case in the first half of 2000. GFMS forecast around 229 tonnes of official sector sales during this period, largely coming from Europe. In addition, it is unlikely that the agreed lending cap will have much bearing this year due to fresh supply from non-signatories to the agreement, which should keep lease rates low. GFMS does not, however, expect producers to take full advantage of the high contango that should result. Net hedging will probably contribute only a small amount of new supply in the first half as both producers and their lender s will be disinclined to sec hedge books aggressively increase after last year 's experience. On the other hand, attractive contango should encourage renewed short selling and disinvestment. Modest increases in both scrap and mine production arc expected, with an overall decline in the latter probably set to occur next year rather than in 2000.

Considering these supply/demand components in the light of last year's rally, there seems to be little justification for the price to trade much above the $300 level in the first half. Gold's downside potential is also rather lower than was the case in the second half of 1999. GFMS, therefore, predict the price to trade within a $265-$305 range in the first six months of 2000, with a forecast average for the period of $280/ oz.