The Elasticity of Jewellery Demand

The single largest component of gold demand is jewellery. In recent years jewellery demand has risen to 80% of total demand for gold in all forms, according to data published by Gold Fields Mineral Services (GFMS) It behoves us, therefore, to understand how some of the basic factors of demand drive gold jewellery markets in different regions of the world.

This article reports on the two basic determinants of gold jewellery demand: the price of gold and the income or wealth of the country/region consuming the gold jewellery. There are other factors that can affect gold demand, of course, including social, religious, fashion and promotional factor. Some of these factors would have to be considered separately in a complete model or gold demand for a specific region. For example, when there is a special religious occasion, gold demand might change from its' "normal" pattern. (This is particularly so with respect to promotional factors, which can change significantly from year to year, and thereby cause changes in the pattern or demand that price and income changes would not be able to explain)

Estimates of price and income elasticity of gold jewellery demand for different regions of the world are included. These estimates are based on work that was supported by the World Gold Council (WGC). All errors and omissions in the analysis are mine, however, and cannot be attributed to the WGC.

For the purposes of this article, the term "elasticity" refers to the sensitivity of gold jewellery demand to changes in the price of gold and/or to changes in the buyers' income/wealth. The question of how much the demand for gold jewellery in the US would rise in response to a 10% decline in the gold price can be answered readily once the price elasticity of US gold jewellery channel is known. Similarly, a change in the US Gross Domestic Product (GDP) - a convenient proxy for US consumers' income - will have an impact on total US gold jewellery demand, which can also be easily estimated one the income elasticity of US demand is known.

To construct estimate, of" the price and income elasticity of gold jewellery demand data, price data an income/wealth data. The exact statistical methodology, including the general model's construction, is described in the box herewith.

The demand data used in this analysis were provided by the WGC, and are a subset of the data presented in Demand Trends, which is published quarterly by the WGC. These data might best be described as retail gold jewellery consumption because the WGC captures gold jewellery demand at the retail level. Demand data for the whole world, however, are taken from the annual reports produced by GFMS. Specifically, "gold fabrication in carat jewellery" data (including scrap) are used in the world model . Country fabrication data and country jewellery demand data differ because of imports and exports, which are irrelevant for world total data.)

We also need price and income data. The gold price is either in US dollar per ounce or into local currency units per ounce (IMF exchange rates are used to convert from US dollars to local currency ). Theory also requires that the price of substitute goods be included in the analysis (because then the price or gold jewellery rises relative to the price of these goods, there is an incentive to buy these "substitute" good ") . However, we generally do this by deflating the gold price with a local inflation index (i.e. by constructing a "real" gold price) so that only then the price or gold rises/ falls after accounting for local inflation will there be an impact on the local demand for gold jewellery. There are a number of choices for the local inflation index, but we have limited ourselves to either the consumer or producer price index.

Income/wealth data are plentiful. Our bias is to use GDP data for the country/region (inflation-adjusted) as the income proxy. In most cases, this worked well. However, in the case or Japan, the Nikkei Index (adjusted for local inflation ) served as a better income/wealth proxy. All income/wealth data came­ from International Financial Statistics published by the IMF. 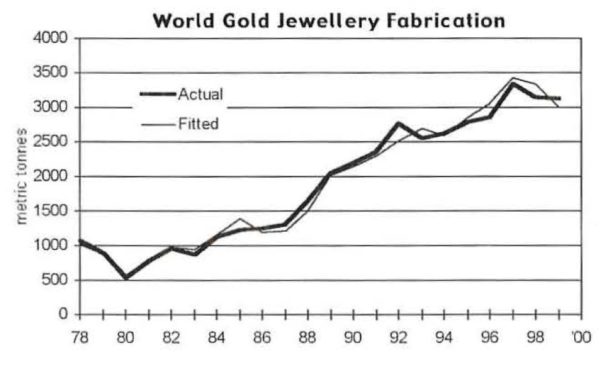 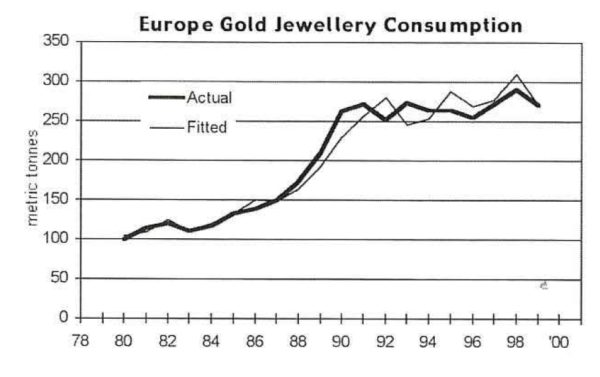 The best model of Japanese gold jewellery consumption in includes the Yen price differ (inflation-adjusted) exports index of the Nikkei Dow (also inflation-adjusted). The stock market proved to be a superior wealth variable in Japan, although this was not the case in other countries. (We are inclined to think that Japanese GDP data understates the economic hardship Japanese consumers are experiencing. The Nikkei Index, as a proxy for consumer wealth, maybe a more accurate indicator of local hardship.) Japanese GDP data were not statistically significant. 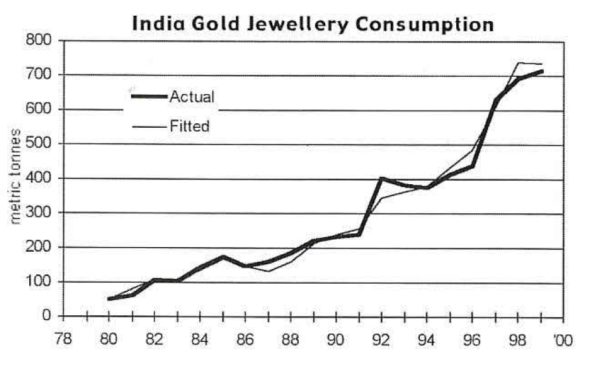 The data for Greater China was the most difficult to work with. The reader knows that the Chinese market is heavily regulated (hopefully about to become deregulated!) Which renders the price data used for the region - namely, the real US$ price of gold - less than an accurate proxy for the logical gold price. It is, therefore, not surprising that the statistical results are the least robust for this region. 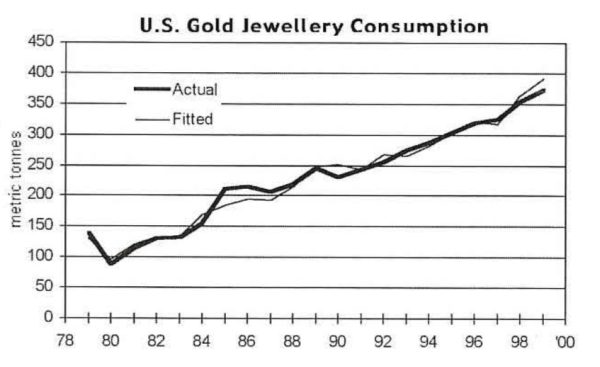 We found significant deviations from a simple price and income explanation of gold jewellery consumption in a number of regions, which necessitated adding variables to the models to "explain" these deviations (or the estimates of price and income elasticity would be inaccurate).

One obvious recent factor, not mentioned at the outset, is the Asian Crisis that commenced in 1997 and led to government gold collection programs to help with the financial fallout of the crisis. Gold jewellery consumption collapsed in the region by much more than either the rise in the local price of gold or the fall in domestic income would suggest.

Interestingly, a slowdown in gold jewellery consumption as of 1997, over and above what can be explained by price and income effects, was also noted for the developed countries. At first, we interpreted this to be indirectly related to the Asian Crisis - there were serious stock market setbacks in 1998 for example, which were indirectly related to the Asian Crisis. However, it may be the result of other factors as yet unidentified. 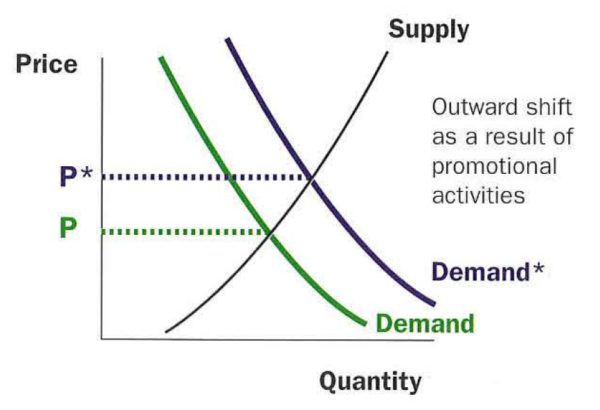 We are inclined to think that one of those "other" factors might relate to the efforts of the WGC to promote gold jewellery consumption. Promotional activities have the effect of shifting the gold demand curve outward - the price of gold rises as a result of the outward shift in the demand curve, but the price elasticity of the demand schedule remains largely constant. Using similar analysis to that presented here, we have estimated that WGC activities might have added as much as 400-500 tonnes to annual gold jewellery consumption in the mid-1990s. (Such was also noted in a presentation by Bryan Parker of the WGC to the Financial Times Gold Conference in Paris last June.) It is possible that the negative bias in gold jewellery consumption in most countries since 1997 is partly the result of less gold jewellery promotion by the industry.

Whatever the cause, at this point we can only conclude that there appears to be a negative trend running through all the demand data starting in about 1997. A forecast of demand would have to take this trend into consideration.

Together these price and income effects suggest that world jewellery demand should rise by about 7% in 200 I from last year's 3191 tonnes, as was recently estimated by GFMS. It probably won't however because of the aforementioned negative trend, which may take as much as 7%-8% out of yearly growth, as it has in previous years. Accordingly, it is likely that world jewellery fabrication demand this year will remain fairly close to last year's level.